We take a tour of Motolug, a company who specialises in handmade collapsible motorcycle trailers 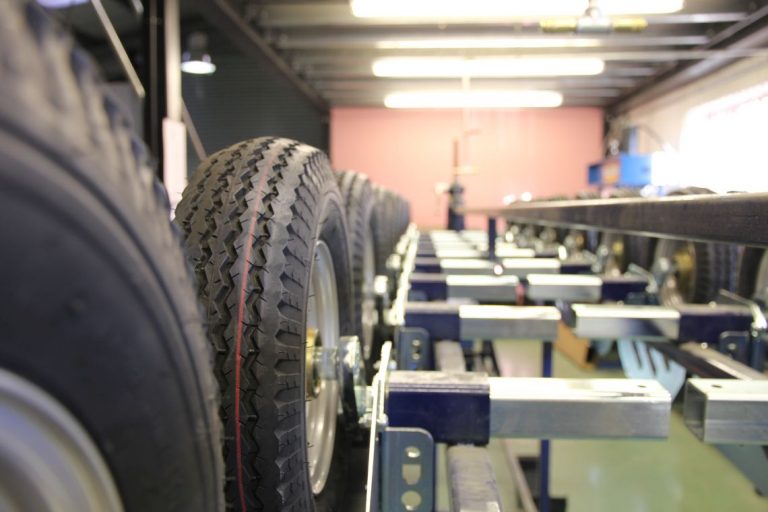 In a small warehouse in rural Warwickshire, Julia Nangle runs Motolug, a company that specialises in handmade collapsible motorcycle trailers. We take a tour of the place to see how it’s done.

‘Before I was involved with Motolug I was a PA to the director of a mortgage packaging company,’ says Julia. ‘I’d just had my first child and was ready to go back to work, which I didn’t want to do, so I went and worked for Bikelug, as the company was known at the time.’ It was ten years ago when Julia started working for the motorcycle trailer company which was started by her then-husband, Doug Nangle. In the time since then, she’s bought the company out and has turned it into a success, manufacturing a range of collapsible motorcycle trailers that can be folded down to fit in the boot of a car.

‘The idea of Motolug started with the engineering company but I bought it out so that I’d have a part-time job. It’s gone a bit beyond that now though!’ says Julia. ‘Like a lot of engineering companies, they were looking for their own product and it started from that. Doug’s business partner had a real interest in bikes and they came up with the idea for a collapsible motorcycle trailer.’

‘A lot of people don’t want a fixed trailer taking up all their storage space, with the Motolug they can just pack it up and put it in the boot of the car and they don’t have to worry about it getting stolen.’

It was a welcome change to visit the small warehouse in Alderminster, just a few miles down the road from the ABR offices. Here, every Motolug unit is welded and assembled by a small, close-knit team. ‘It’s just me, Tom and Ian who work here now,’ she explains.

‘I wouldn’t want it any other way. It’s hard work, but I love it.’ It wasn’t always like this though. When Julia moved to the Midlands from Lancashire, she was running the Motolug business out of an office, outsourcing all of the labour.

‘We moved to Alderminster when my husband got a job with Future Energy, so I bought the business with us as well. At the time the work was contracted out and I just ran it from a small office but it got a bit out of control with the amount of people doing different things. So I started to bring it back in-house and took on Tom to help assemble the trailers.’

It wasn’t until a local businessman, Peter Osbourne, offered to buy shares of the company, that things could really take off. ‘It all went a bit quiet with the recession’ recalls Julia as she thinks about the past. ‘But I survived the worst of it and now I can see a future. We entered talks with Peter and he ended up buying parts of the company. I’m glad it happened actually, we’ve moved to nicer premises, we’ve been able to take on Ian and I’ve been able to be in the office a bit more as I used to spend a lot of time on the shop floor.’

There are four versions of the Motolug trailer available, each offering suitability for a variety of needs. ‘We do the SE (£645), then we do the SE+ (£695) which is basically the same trailer but it has heavier rated suspension so you can buy a conversion kit to let you make it into a twin. Then you can buy the Twin trailer (£995) outright, which can then be reduced to a single if need be, it’s quite versatile and it can take 560kg in weight. We also do the Heavy Duty trailer (£775) which is made from a thicker steel and it has a longer front, wider rear and longer axle. It means that your bigger bikes, your Harleys, your Goldwings, are much better balanced than on the SE trailer.’

The trailers are made from mild steel, a material that offers great carrying capacity at relatively low weights. ‘Each SE trailer weighs about 65kg, and the Heavy Duty about 75kg and the steel used in the trailers is only 2mm thick so that just shows how strong the metal is when it can carry 350kg for the basic and 450kg for the Heavy Duty.’

‘All in all, there are about 100 processes that go into making each trailer,’ Julia tells me as we walk around the warehouse. ‘It’s difficult to say exactly how long it takes to make a trailer though, but it’s about two weeks to turn around a batch of fifty. We’ve got stock built up now, it’s taken us about seven years to get to this point, but we’re in a position now where if someone orders a trailer we can get it to them the next day.’

‘We get the parts in from the Seward Precision Laser, a company based in Preston. Everything on the trailers is made in the UK and Motolug originated in Lancashire so we still use some suppliers from up there. All the design drawings are sent off to them so they can cut the sheets and fold them to our spec.’

‘We usually order a batch of fifty at a time from them, so they all come in and the parts are separated out and the boys spend the time welding the main beams. There’s four parts to the main beam, two on each side. They all get welded up with little bits that make the full trailer and then it goes off to the painters. While they’re doing that all the suspension can be made up.’

The suspension used on the trailers is one of the main selling points, offering a long life with next to zero maintenance requirements. ‘We use torsion suspension and it’s really clever. The internal part is a square that’s forced between neoprene. The rubber allows it to rotate a bit, so no springs used at all. It’s just very, very strong and very reliable with minimal broken parts.’ ‘After the suspension is made we put the hubs and the bearings on the wheels. We offer an eight and a ten-inch wheel so we tend to put the wheels on right at the end. It’s an additional £40 for the ten-inch wheels but we’d only really recommend these if your tow bar height is higher than 16 inches.’

‘All the lighting and electronics are done in-house. Because we conform to EU approvals, all the orders that are going out to Europe have a different lighting system to the UK units.’

‘Our new models have a few design tweaks based on customer feedback and some extra details on them as we had to go through European approval with them,’ Julia explains, telling me how the business is looking to expand further into the European market. ‘The European approval allows every single country in the EU to abide by the same directive. So, if you make a trailer in the UK it can be registered in Germany without it having to go through that individual country’s approval.’

‘Orders from Europe account for a quarter of our sales but it’s something that we want to develop more. We have a distributor in the Netherlands who covers the Benelux countries but we find that outside of the UK Spain and Portugal seem to buy more of our trailers.

They’ve got quite a big biking community, but so have a lot of European countries so we want to get into that market a bit more. Oh, we also have a distributor up in Norway, but it’s a lot quieter up there!’

It was interesting to visit the warehouse where the Motolug trailers are designed and built and the small, intimate feeling about the company was refreshing to see. Julia and the teamwork close with their customers to ensure that everything’s spot on and as everything’s assembled in-house the quality control is strict, Ian and Tom preventing any damaged or not up-to-scratch goods from being sent out. If you’d like to read more about Motolug, check out their website at www.motolug.com