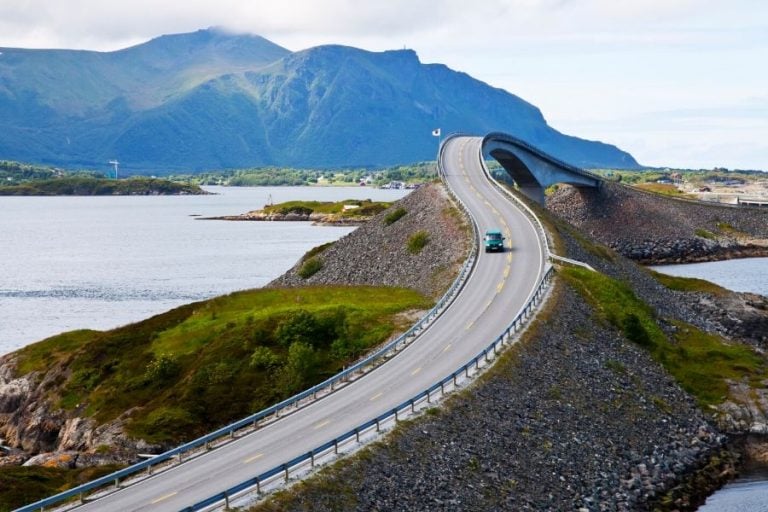 For such a short stretch of tarmac, Norway’s Atlantic Coast Road packs one hell of a punch. Alice Cook tells us more.

The Atlantic Coast Road, or simply the Atlantic Road, in Norway, is undoubtedly one of the most picturesque roads to ride in the world. For only a short stretch of road, a mere 5.1 miles of the Country Road 64, it couldn’t be more jam-packed with twists and turns and is somewhat of an optical illusion; with bridges appearing to end directly in the sea. The road connects the two cities of Kristiansund and Molde, in the county of Møre og Romsdal and passes by Hustadvika; an unsheltered part of the Norwegian coastline which is considered as one of the most dangerous parts of the country’s shoreline with many ships meeting their watery end here.

As the name suggests, the road runs alongside the Atlantic Ocean and has long been a popular route to film car advertisements, recently being hailed as one of the world’s best roads and in 2005 was named as ‘Norwegian Construction of the Century’.

So what makes this road different from any other coastal road? Well, Hustadvika is an infamous stretch of ocean and can be nothing short of dramatic when the storms come crashing over the sides and onto the road itself. But in calmer weather you might be one of the lucky ones to see the whales and seals just off the coastline.

Originally built in the early 20th century with the intention of serving as a railway between all the small islands, the plan was eventually abandoned and instead, in the 1970s it was developed into one of the best riding roads ever. It was finally completed in 1989 after costing a total of 122 million krone and taking a battering from no less than 12 hurricane-level ocean storms during the process, often putting the completion of the road into doubt.

It is truly a roller-coaster of a ride with more ups and downs than the UK economy. There are some killer bends which means, especially in the stormy weather, it’s probably best to take this one at a more leisurely pace; plus you wouldn’t want to miss any of the stunning views.

Talking of views, there are eight bridges in total and at least four viewing platforms for you to get off the bike and take a rest. One on the outer edge of the breakwater at Askevagen, is surrounded with glass barriers giving you a 360 degree panoramic out into the temperamental Atlantic Ocean and really exposing you to the elements.

The weather can be unpredictable, and at times harsh, but with enough dips and turns to keep biking enthusiasts of all levels interested, it’s easy to see how this ‘small’ road can feel so big. Just be aware of waves sweeping over the road in front of you and taking you with them!