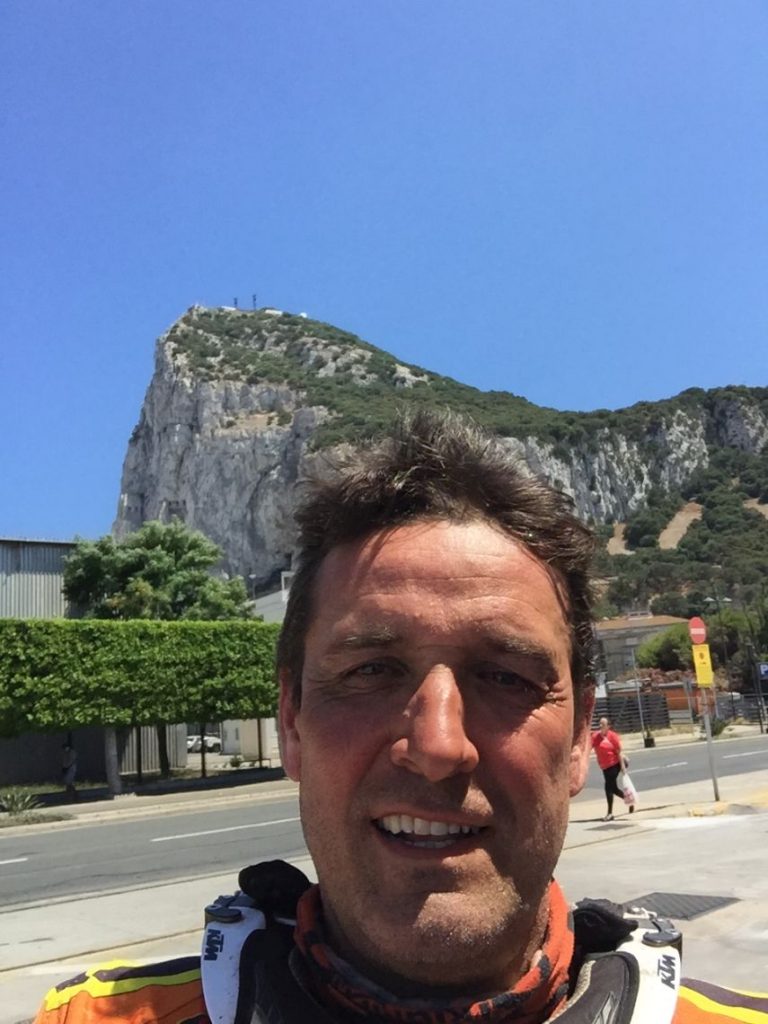 A tiny, red SIM 50 rigid framed grass tracker, I was seven. My dad went to his brother’s motorcycle shop in Sudbury to buy himself a ‘NVT 175’ (Norton Villiers Triumph with a Yamaha 175cc two-stroke and mono-shock suspension) and I sat on the new SIM all day in the shop.

When we left to come home, my dad had bought me the bike instead of one for himself. A few weeks later I built a huge jump in the garden and crashed the bike through the garden fence, I wasn’t in trouble, my dad just grafted some telescopic forks on the bike replacing the banana-shaped ones.

I’m on my third 690 now and I have been gradually improving the standard bike for the Gibraltar Race, which is what I use them for. The WP Cone Valve forks and the Tractive Rally rear shock are the most expensive accessories on the bike. However, there is nearly £10,000 worth of accessories on the bike, if you had to buy them all new.

I have always been attracted to the tarmac mountain passes on the mighty 1190 Adventure R. However, since I have been doing the Gibraltar Race I have become a huge fan of the remote desert pistes, flat out on the 690 with a dust cloud you can see from space.

I love it. Plus, it scares me half to death with the huge drop-offs on the off-road mountain tracks. This year’s Gibraltar Race went through most of the mountain ranges in Europe.

I will use a tent if there is no other option, however, I would prefer a hotel. After a day’s racing on a 7/14 day race you cannot beat your own space and a hot bath.

I have always wanted to do the Dakar. I nearly wore my wife down enough to look at entering it a few years back. She started looking into the costs and requirements, it’s so expensive and long-winded.

In the end, I did the first Gibraltar Race in 2016, I would describe it as a European Dakar-style event for mortals, the same amount of days and miles crossed with the Wacky Races. The wife also said that you can do 10 Gibraltar Races for the entry price of the Dakar, but that doesn’t mean I have to do 10!

There’s enjoyment in both. I love being able to pitch my tent in peaceful isolated locations, sitting by an open fire without a care in the world, but when the weather’s not looking too good, who doesn’t like the comfort of a warm room, shower and a bar? Not to mention a full Scottish breakfast the next morning.

I’ve been really lucky with my riding. I had a terrible head-on with another bike, over a large blind jump when I was 13, which resulted in a long list of broken bones and a three-month stay in hospital.

I don’t remember anything of this, just coming too about two weeks after the crash. I did have a few dangerous moments on this year’s Gibraltar Race. I had a head-on with a car (I had washed off most of my speed by the time I hit it) on an off-road mountain pass.

My most memorable moment was when I qualified for the three-man GB Team at the BMW GS Trophy qualifier in Wales. I had come equal third with a young lad and we had to compete in a ride off. I eventually placed third, and our three-man UK team went on to win the GS Trophy in South Africa in 2010 against the rest of the world. This is what really gave me the bug for rallies.

■ What do you miss most when travelling?

Home and my family. Sometimes my wife will come on an adventure but doesn’t like doing the miles you need to cover each day.

■ The person you would most like to meet and what would you ask them?

Paul McCartney – I would ask him to retire gracefully.

What do you call a fly without wings? A walk.

If you want to be a reader exposed in a future issue of Adventure Bike Rider, email  [email protected] and if we feature you you’ll get a free year’s subscription to the mag.

You can’t say fairer than that, eh?