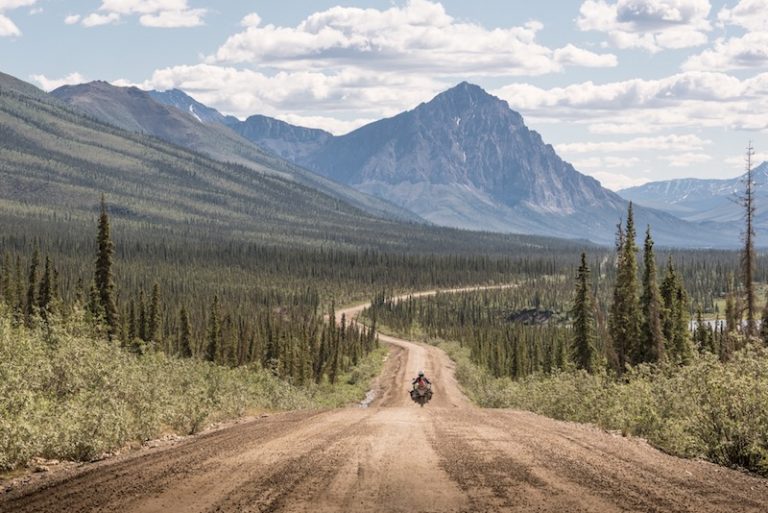 After biking from the bottom of the planet to the top, motorcycling Alaska stole Lisa Morris’ heart. Here’s how…

Skirting northeasterly around Denali National Park, I was hit with countless chevrons of snow-capped, glacial studded mountains in the Alaskan interior, my hunger for wildlands was going to be well-nourished here.

It was a sweet spot that seemed to me the very best of Alaskan wilderness allure. For us, it was the beginning of the end of a two-and-a-half-year road trip from the bottom of the planet to the top, the last frontier.

Along the way, the fortuitous power of social media connected us with the Fishhook Fatties, a gregarious biking group from south-central Alaska whose ethos is  ‘work hard, play hard’, at least during the summer months where daylight hours are in high demand.

The Dust to Dawson (D2D) motorcycle event was just around the corner, so we jumped at the chance of joining them in June upon invitation. It was perfect timing before the final push up to Prudhoe Bay, the northernmost reaches by navigable road in the US. 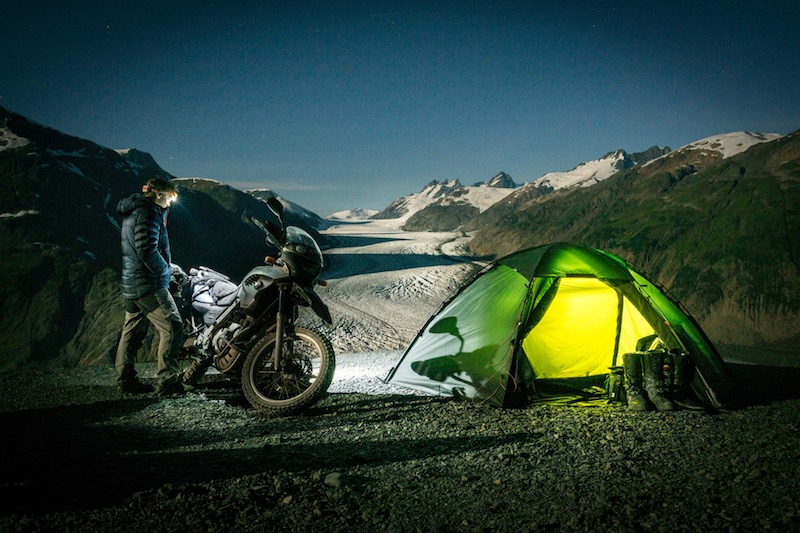 As day ones go on any motorcycle jaunt, my expectations comprised of no more than finding my stride in the saddle. Little did I know what lay in store, an Alaskan’s Alaska astride two wheels. When the clouds are not obscuring her (sometimes it’s completely out of view), Denali National Park’s centerpiece will do anything but disappoint from the George Parks Highway.

As North America’s highest peak, Mount Denali towers above all at 6,190m and is otherwise known as The Great One. Settling into the dirt biking bliss that is the Denali Highway, all the way from Cantwell to Paxson, rapture flowed out of my body going headlong across the tundra.

Out of the captivity that can be felt in cities, a necessary evil that ensued for a quick resupply in Fairbanks, we all but raced northwest up the Elliott Highway, our starting point for the 156-mile jaunt to Manley Hot Springs via an old gold-rush route, bestowing us with views of the vast Minto Flats that made us earn every sloppy mile. 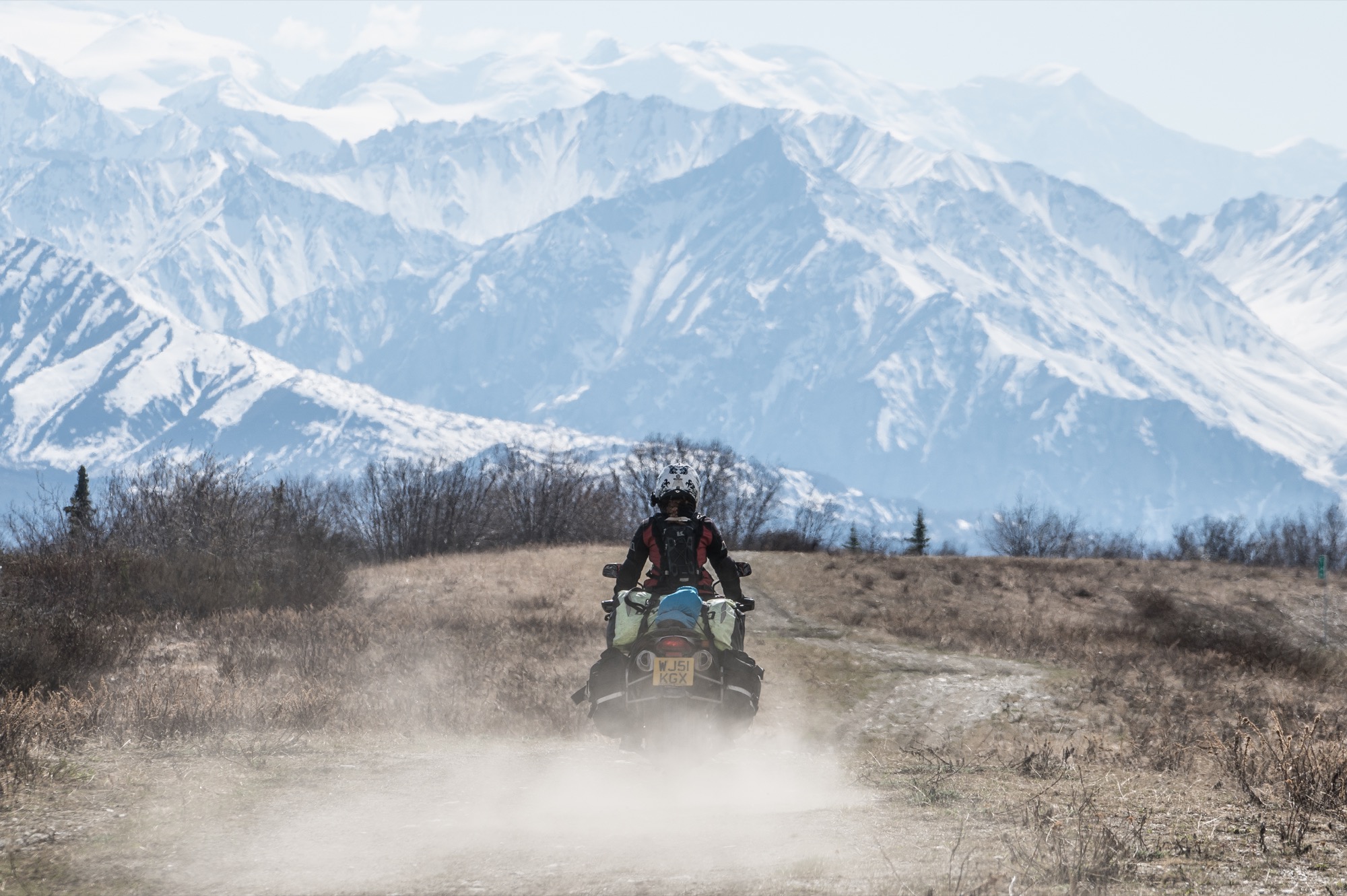 Having fallen out of favour with Lady Luck, dark clouds raced through. I looked up and gave the sky a slit-eyed appraisal. Dark and tortured, it hammered down on us the entire way to Manley Hot Springs.

Like riding on snot over marbles, we trudged our way through the calcium chloride with some artful slides thrown in for good measure. On high alert with the backside muscles poised for a long cardio workout, and my lips set to pursed.

What was I expecting on Pearl, my hefty F650GS laden with luggage at 240kg? I scrabbled, lost control and watched as my wheels flung manes of spray everywhere. I should’ve embraced light and tight long ago, as size always matters off-road. Ho hum. 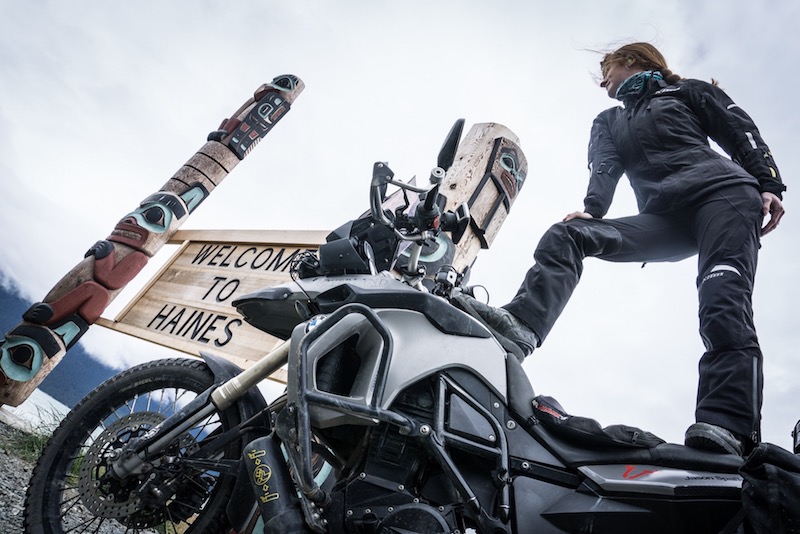 Having located a drier section, I shelved the dampened spirits and smiled like the sun was coming out. It wasn’t, but I went for it with a handful of throttle. I admit, I was amped.

Failing to realise when we’d reunited with the viscous malevolence, I scared myself silly at 60mph as I squirmed in a mire mid-corner. “What the..!” I cussed, careening horribly toward a ditch, my brain unable to gauge the speed at which enthusiasm outweighed skill.

Language went away and for a split second, I prayed in a soft high-pitched lament any human listener would’ve termed a dizzy yelp. “Oh my G-a-w-d, I forgot who I was!” Taking a moment to stop my heart’s wild tattoo, thank goodness for adrenaline, I thought. 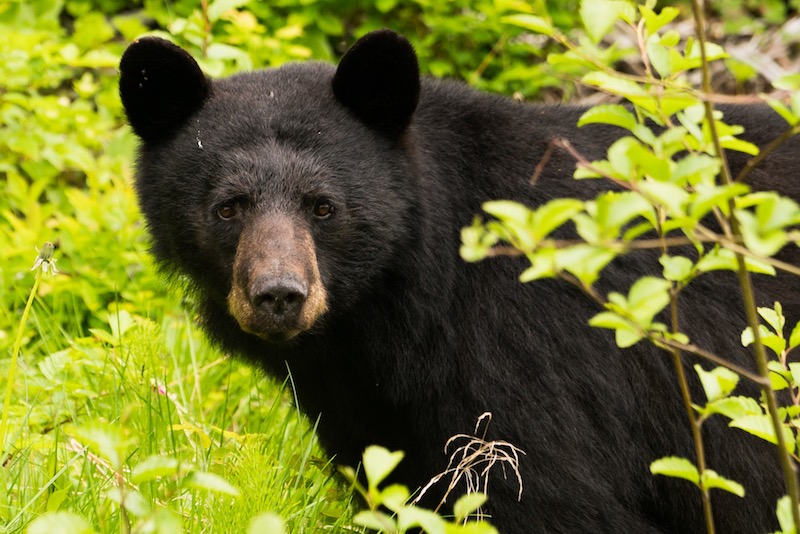 To all yearnings, the sloppy passage ceased and, having prevailed, we struck gold. Kicking the side stands down, we observed a charming Post-It note village on the banks of the Tanana River. Just outside Manley Roadhouse, we pegged the Dome Sweet Dome in the campground to a regiment of twin-engine skeeters, rushing to meet and greet us at full tempo.

Having ditched the riding gear, our newly exposed skin must have looked ripe for the feasting. Jumping straight into the spring-fed baths, we kept the winged assailants at bay and our muscles set to soaking. A heavenly antidote to the tough journey to get there. 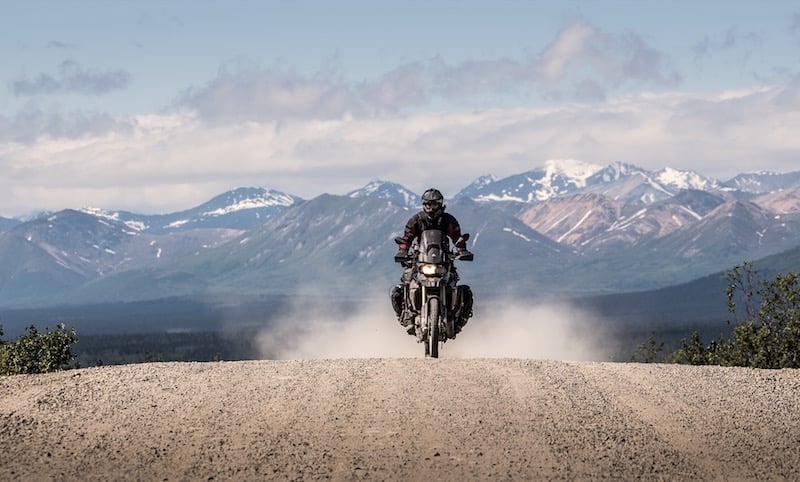 A sea of bikers

The next dawn brought an unexpected win in the road surface lottery, and a pleasant morning accompanied by lovely swaths of afternoon where we rode the same route on dry satin all the way back to Fairbanks. Then, around 180 paved miles on the connecting Richardson Highway leading onto the Alaska Highway deposited us in a sea of bikers, courtesy of Thompson’s Eagle’s Claw Campground at Tok.

It’s a favorable choice for riders of any discipline, but particularly popular for bikers en route to D2D. While the place is a forest of intimate snuggeries, the day rapidly became an amphitheater of motorcycle noise filled with the unmistakable biking camaraderie that springs from the fellowship of the road. 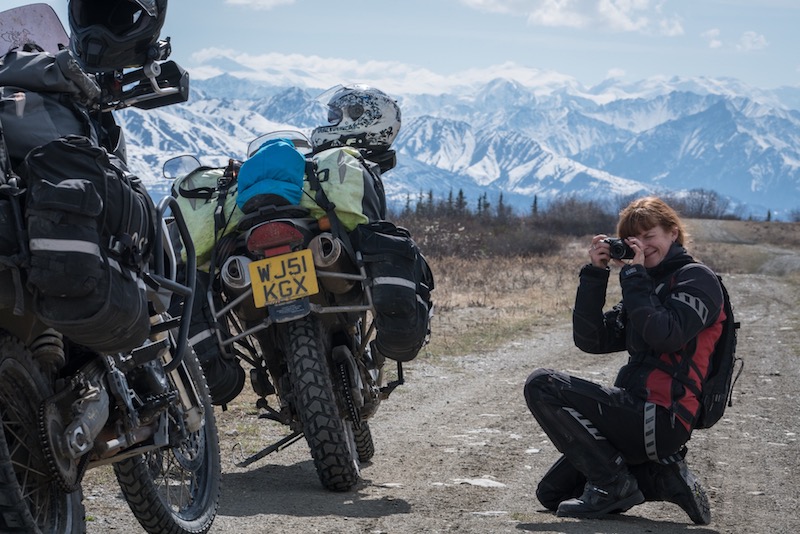 Cordial relations established with my stomach from a Fast Eddies breakfast of reindeer sausage the following morning, and with no snot on marbles in sight, the day saw us make our way out of Tok just down the road to Tetlin Junction. With favourable conditions on our side, the Taylor Highway saw us ride 60 beautifully paved miles before it turned to a good dirt road the remaining way to the border.

Magnificently, riding the Top of the World Highway in such a direction will bestow a further 115-miles of partially paved, but mostly reconstructed, chip seal and sometimes challenging gravelly roads connecting us with Dawson in the Yukon. 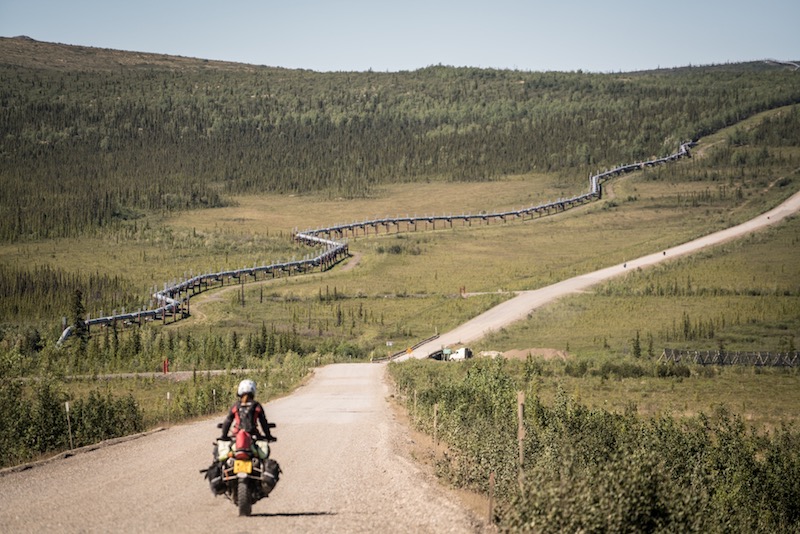 If you haven’t heard about D2D, you’re in for a treat. Just trace a line on the map to Dawson, hop on your motorcycle in June and start riding. If you can, try not to rush at getting there, for a ride both rewarding and nurturing is likely to unfold. Rock up to Dawson but just don’t call it a rally. Despite such a disclaimer, you’ll be in the thick of an atmosphere abuzz with the boundless joy that is D2D.

The backstory starts with three unassuming fellows: John ‘Cash’ Register, Jim Coleman and Mike ‘Fighter’ Stein. Dating back to 1992, D2D was concocted over a few pints in Dawson’s Midnight Sun, a hotel bar where the trio first met. As Fighter recounts, a 500-mile road trip between the amigos up the Dempster Highway to Inuvik was set in motion, during which Coleman and Cash deviated to Eagle, Alaska. Awed by the place, a pact was made that when one of them died, the other would return to the North Country with the ashes of the departed. 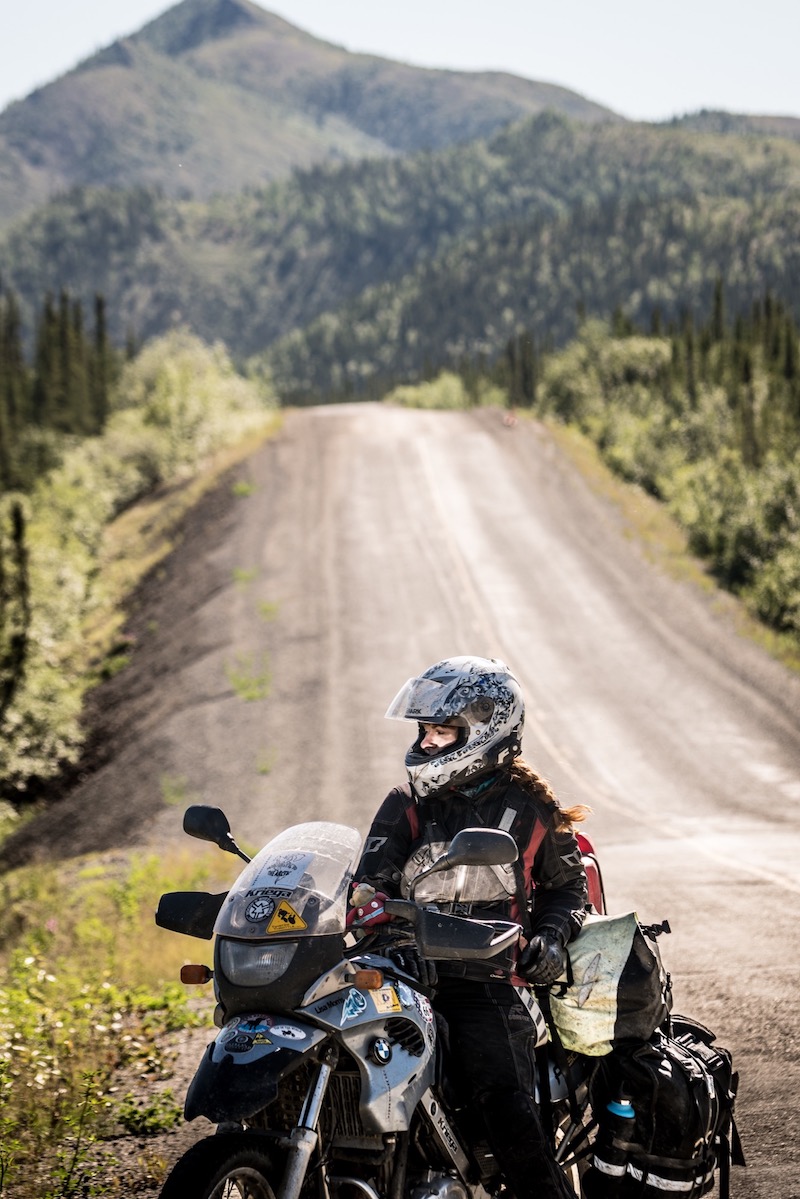 Devastatingly when Coleman was hit on his R1200GS by a Suburban in 1994, Cash reenacted their road trip a year later. Mile for mile, he dismounted at the same pit stops, refueled at the same cafes and drank another cold one at The Midnight Sun, while carrying Coleman in the tank bag. The dusty route to Dawson gained momentum, magnetising many to pay their respects, come together and celebrate.

D2D’s 24th anniversary saw riders sign in from 20 U.S. states and six countries. Hosted by ‘Dawson Dick’ and his wife, the 400-strong motorcycle event comprised three days of biker festivities, local charity fundraising and on-the-fly poker playing. After perhaps the liveliest, non-rallies I’ve experienced, the return road to Tok beat backward under us. Peeling reluctantly away from the Fishhook Fatties, I arose the next day muddy-eyed, having burnt the candle down to a nub. Winding out of Tok, we rode into a peevish wind via Fairbanks towards the Dalton. The last leg north until we ran out of road. 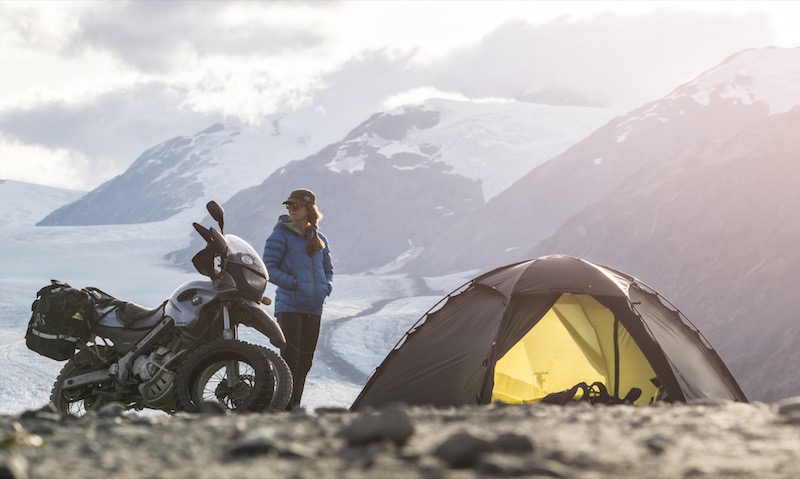 I’d somehow carried favour with Lady Luck again, as an uncharacteristically dry Dalton Highway guided us for a glorious 248-miles. Gliding along a good dirt road from Fairbanks to Wiseman, just 12-miles from Coldfoot—the last place to gas up and the halfway point to Prudhoe Bay.

The landscape took on a raw, peculiar beauty with a bleak Wuthering Heights quality. The only feature vying for our attention being the pipeline that followed us all the way from Fairbanks to the top. That, and Atigun Pass in the Brooks Range, where the Dalton crosses the Continental Divide, which holds a strong resemblance to the prominent peaks of Patagonia, Scotland or New Zealand. Take your pick, it’s impressive. 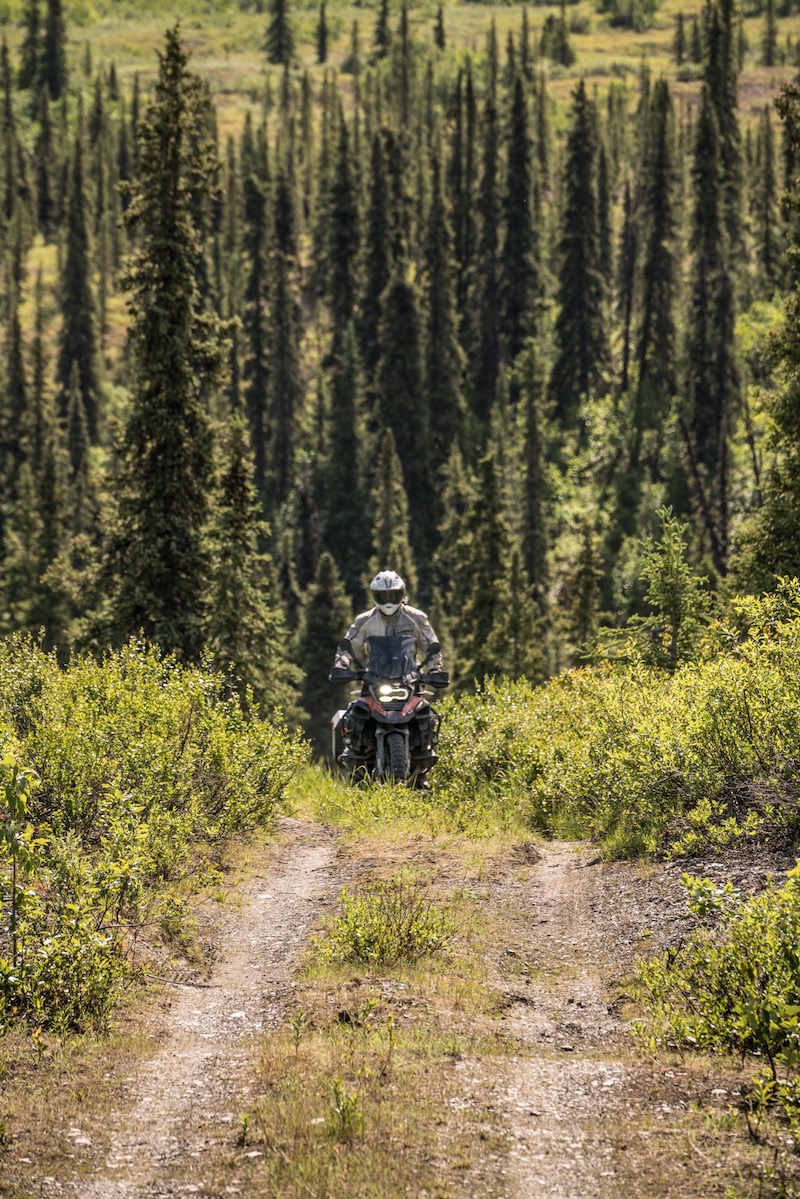 Jason did let it slip he felt a little cheated by Alaska’s bluebird skies and the perfect riding conditions that are usually pretty unstable. “Really?” I said, my eyes rolling to the top of my head. Blissfully happy myself, I carried on watching out for Dall sheep grazing on the upper slope, a herd of caribou crossing our path and bald eagles overhead. It was a treat to see a family of musk ox in the grasses to boot.

It’s true what they say, Alaska has two seasons: winter and construction. Inching closer towards Prudhoe Bay, gifted me to a white-knuckle ride on a loose section of road under construction. If I’m going to cruise beneath warm sunny skies to this point, I’ve at least got to earn my spurs on the last smidgeon of it. A stratagem came to me, like a god thundering in my head: just keep riding. 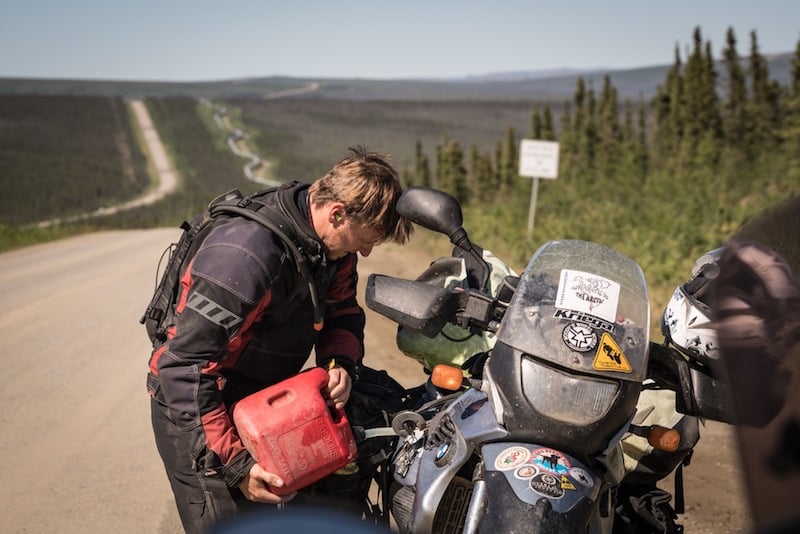 I’ve surmised that after 47,550 miles, my journey on Pearl was set to continue as a great enterprise of balance: she imparts to the gravel a generosity of spirit and while urging me to relax and let go, frequently saves me from myself. Aided on the Dalton’s loose stuff by bumping into Lyndon Poskitt, a Brit that races the bike on which he travels, instilled a ‘cock of the walk’ hubris in me that I didn’t know I possessed.

Hurray! We’d made it. Damn I felt good! 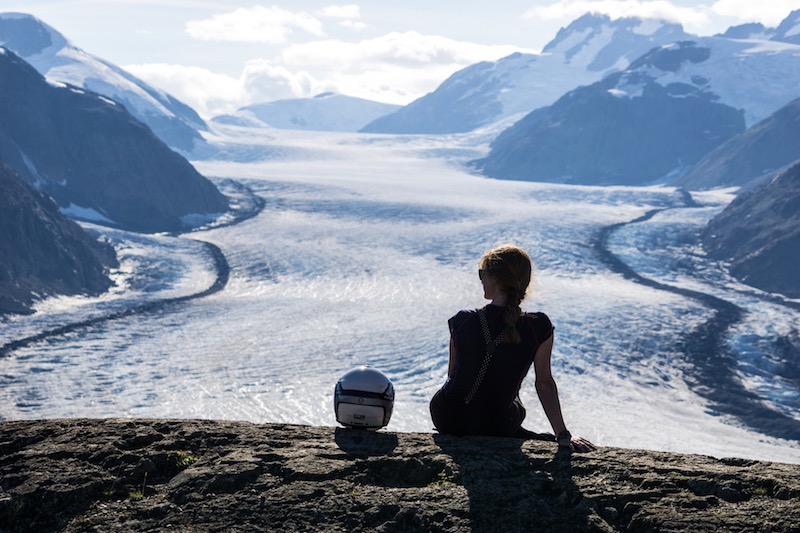 Where there’s pinnacle pleasure, there’s Prudhoe Bay. Just like the road to get there, your memories of Alaska will calcify and you won’t experience it without feeling you’ve blossomed many friendships, forged some intoxicating new ones and deposited heavily in the good times bank. Summer Days I’ll remember as cloudless, the air gold and pumped with the excitement.

An undeniable sense that having made it this far, I may have touched the vanishing point, but it mattered little and less. It was just part of the way astride two wheels to something else, a gold-encrusted elation. If ecstasy means the intrusion of the wonderful into the ordinary, then it had just happened to me.

Lisa and Jason regularly blog about their adventures as they travel around the world, and if you want to read more head to their website Two Wheeled Nomad.