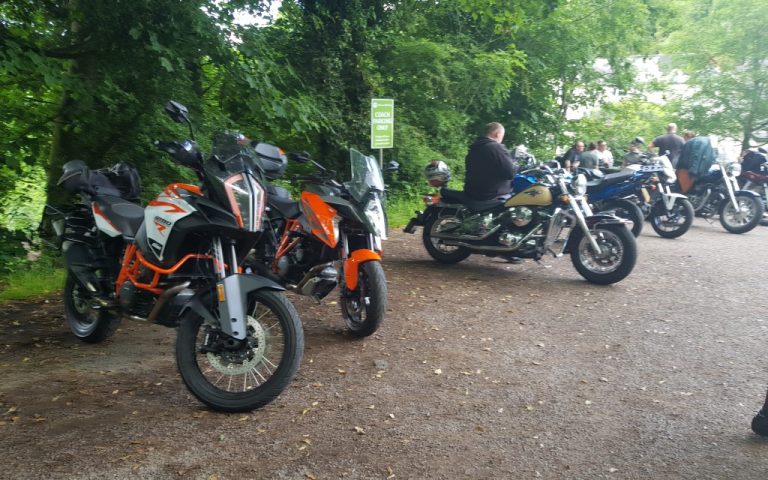 If you read my piece about the KTM 1290 Super Adventure R in the last issue of Adventure Bike Rider magazine, you will already know that in the first two months of ownership, I had only managed to put 15 miles on the bike’s clock. Illness had kept me out of the saddle and I spent most of my time daydreaming about setting off into the sunset on my big KTM and playing with the beautiful TFT dash.

Since I wrote that piece, like the weather, things have improved, and throughout the month of June the 1290 and I have been inseparable. My first ride after the layoff was a wonderful day out to the Malvern Hills for a sausage sandwich, and man did it feel good to be back in the saddle!

On that day, my girlfriend, Naomi, was riding pillion, and we were following her dad on his Kawasaki ZZR1400. Now, the ZZR1400 is no slouch (I mean, it’s limited to 186mph and will get there with gears to spare) and it predictably trashed the KTM when accelerating away, but my 1290 put up a good fight and allowed me to discover where the bike excels.

It’s no secret that the Super Adventure is a humongous lump of bike, but this means that when there’s a pillion on the back there’s plenty of room for both of you.

In fact, if I had kids, I reckon there’s enough spare room for a few booster seats back there as well.

And the best part, with the power of the 1301cc engine, you barely notice that you’re riding two-up either. Handling was barely impacted, and the bike sprinted along the tarmac in the same, smooth and comfortable manner that it does when only a rider is present.

The panniers are also nicely placed to provide a pillion with ample room, and they don’t force an uncomfortable knee bend.

We spent a lot of time on the Triumph Tiger Explorer throughout 2016 and 2017, and while the pillion perch was comfortable, the standard panniers would cut into the back of a pillion’s knees.

So, if you’re looking for a bike and it’s more of an ‘us’ than a ‘me’ purchase, will the KTM be well received by the better half sitting behind you? I have absolutely no doubt that they’ll be comfortable, secure, and smiling from ear to ear as they too get to experience the thrill of the big ‘ol 1290.