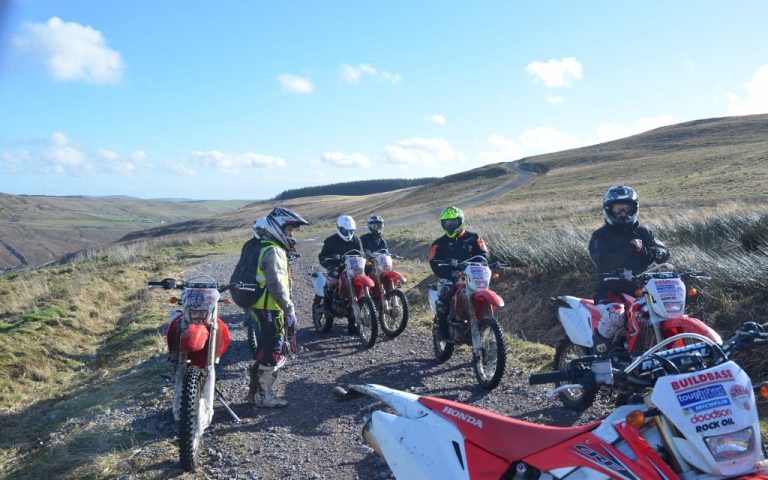 For a taste tester of what green laning entails, we travel to Wales to take part in Dave Thorpe’s off -road riding school.

The day started with a cup of tea and a brief introduction to the bikes. They were brand new Honda CRF250XRLs, meaning that they are road registered with lights, indicators and a number plate. The tachometer on all of the bikes read zero miles. They really were brand new, straight out of the crate.

The order of the day, it was explained, was that we’d start with a bit of practice and warm up on the motocross track sprawled across the hillside before us, then we’d head out to tackle some of the taxing green lanes along the valley tops of this South Wales location.

The group was a mixture of skill levels, with beginners, intermediates and advanced. Eight of us in total, all kitted out with enduro gear, provided as part of the £199 price.

This was the beginning of a day at the Dave Thorpe Honda Off-Road Centre, a facility not far from Pontypridd and pitched as a perfect way of getting out there on an enduro bike, doing some green lanes and deciding whether you like it or not. It was certainly a case of ‘in at the deep end’…

Unlike the Simon Pavey BMW offroad riding school featured in ABR 19, where that two day course took you gently through the first few steps of off-road riding, gradually building your confidence until you were ready to tackle some of the trickier stuff, this was straight on to the motocross track to see how you fared in the thick of it.

Having raced motocross as a child and not having done any since (a scenario I imagine a few of us are in), it was liberating to be let loose on the smaller track, gradually getting a feel for the bikes, being encouraged to lean over the front for extra grip and keeping your head up to look for the corner exit.

After the shorter version of the circuit we were led on to the full blown competition circuit, the format being to let you go at your own pace, and learn the hard way how to get yourself around.

Dave Thorpe was on hand for guidance, as was British motocross champion Stephen Sword – part of the training team – keeping a watchful eye over everyone.

It was an odd sensation being given a brand new bike and being encouraged to thrash it around a track. But these are tough bikes – easy to ride – and all at the start of what was sure to prove a grueling eight months ahead, being used and abused by the clientele of the Off-Road entre (at the end of the season they get sold off and new bikes bought for the next season).

After another cup of tea from the onsite tea wagon, as well as a debrief on how we were all doing, we were led along a short stretch of road and on to the endless expanse of these Welsh moors.

With all the rain we’ve had recently the trails were sodden. Plenty of deep puddles, ruts and bogs. The pack formed a natural order, with the experts trailing Dave Thorpe at the front, then the intermediates and the beginners slowly picking their way through at the back.

It’s fair to say there were some tricky, and amusing moments. If you’ve seen someone start to fall off a motocross bike, but keep their hand on the throttle and have it wheelie beneath them whilst their legs dangle for dear life off the back, then that’s what happened to one poor chap, whilst the rest of the group stood and watched, relieved it wasn’t happening to them.

The day progressed and all of us improved. We had to, as the trails became ever more gnarly, rutted and boggy; not quite what Mike encountered on Bwlchy Groes, but heading that way. By the time we arrived back at HQ for an afternoon cup of tea most of us were beat. But if we wanted, we could head out and spend the last 45-minutes on the motocross track. Like a red rag to a bull… 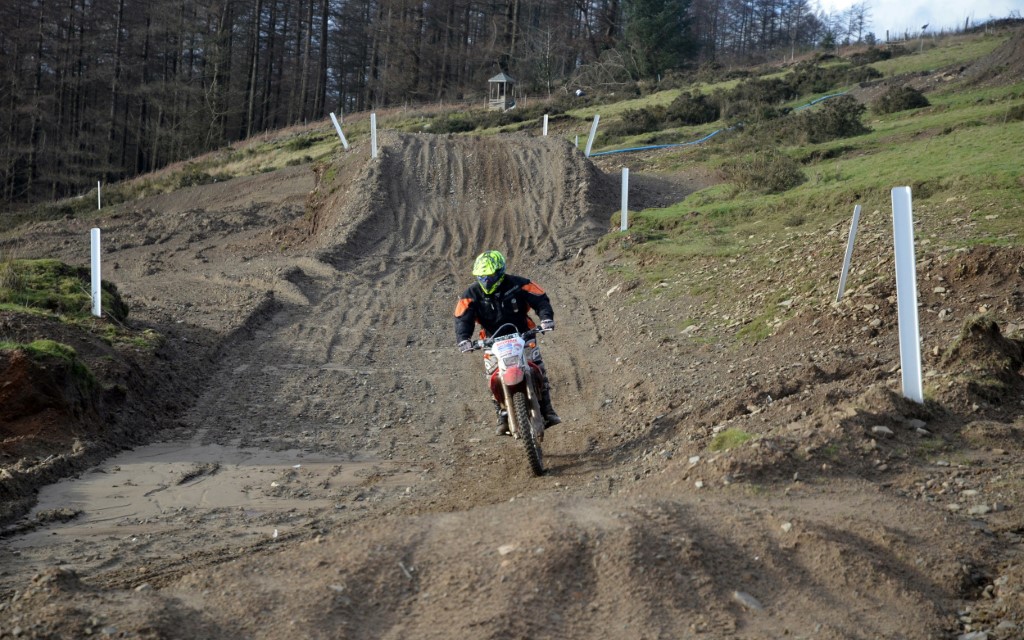 I can’t say this is the most structured or nursing of riding schools. For anyone that really is a beginner, certainly in these wet conditions, then the day could have been a misery. But for anyone happy and willing to give it a go, get wet, fall off, and have to drag their bike out of a bog, or a Welsh sink-hole as I did, then the Dave Thorpe Off -Road centre could well be the thing to stir up some of those long forgotten joys of childhood motocross and tearing across fields as a gurning lad or ladette. And afterwards, who knows, maybe you’ll buy a bike and go out exploring those green lanes yourself.

Who is Dave Thorpe?

Dave Thorpe is a motocross star from the eighties, winning the world title three times, first in 1985, then in ’86, and finally in ’89. He predominately rode for Honda in the 500cc class, and retired from motocross in 1993 at the age of 31. Following that he managed various race teams, before opening the Off Road Centre in 2013. He’s also a thoroughly nice chap.

So you’ve heard about green laning (the term given to riding on byways open to all traffic, BOATs, and other routes with public access, ORPAs) and now you want to give it a go but don’t know where to start. You are already taking the first steps by reading this, you have a sense of adventure and this is key to enjoying this sport. Now you need a bike. You don’t need anything fancy, in fact, the cheaper and easier to fix and maintain the better. Go for something light to start with. You may be picking it up a lot. A great all round bike is a Suzuki DRZ 400. Make sure it has a set of knobbly tyres, TKC 80’s are a popular choice to begin with.

You will need suitable clothing. Textiles are the best. Make sure there is plenty of armour moulded in or preferably invest in additional armour. Gloves and helmet go without saying. Now, the major stumbling block for most; where to ride? I started by simply getting an OS map and marking some BOAT’s and ORPA (see the map’s legend) and then getting out on the ground and having a look. Unfortunately, many maps are out of date and what seems legal on a map may in fact be illegal on the ground. My opinion is that if there are no signs stating otherwise, and no locked gates or other obstacles to get past, and common sense doesn’t say, ‘don’t ride it’, then it’s fair game (assuming its legally marked on the OS map). To be sure of being 100% legal you are best joining the Trail Riders Fellowship (www.trf.org.uk) and going on their organised ride outs. It’s always better to trail ride with others, especially if you are starting out. A good alternative is to attend many of the organised rides through the ABR website, or put a post up asking others to join you in your new hobby. The main point is to be as safe as possible, whilst having as much fun as you can handle. Now get out there and have a go. I’ll see you on the trails.