Bon Voyage Continued: A charity ride from John O’Groats to Land’s End and back 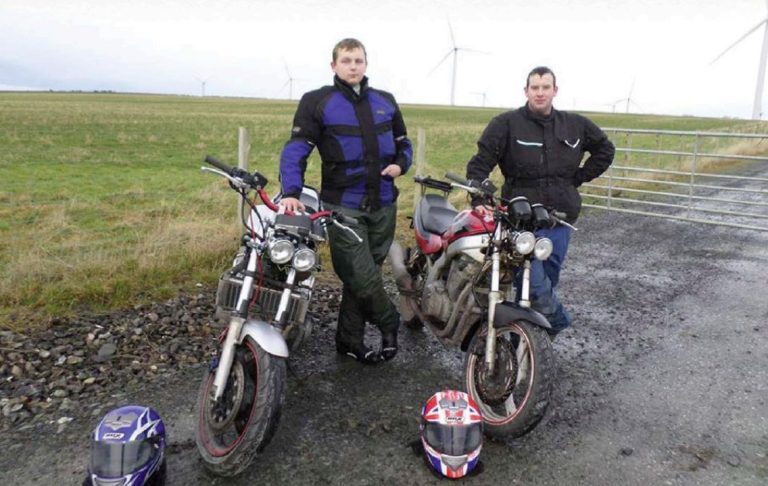 Closer to home we catch up with Mikey Sunter and Max Hughes, an intrepid pair of travellers from the North of Scotland, planning on riding from John O’Groats to Land’s End and back for charity…

Mikey is a 22 year old chef and Max is a 20 year old wind turbine technician, who tells us that the views from the top of a wind turbine are breathtaking, as we can well imagine.

The pair live twenty miles from John O’Groats, in the small town of Thurso. Mikey’s been riding since the age of four and regularly has as many as five bikes in this shed at any one time, including BSAs, which he’s owned serveral of. Max has been riding since his teens, the pair of them meeting a few years back and immediately hitting it off over their shared passion for motorcycles.

Mikey is well known to those who attended last year’s Ullapool ABR Rally, turning up on a bright green Yamaha SR125, which he took green-laning. For this 2,000 mile round trip to the other end of the UK and back, Mikey and Max have upgraded their machines; Mikey upgrading to a 1998 Suzuki GS500 that he paid £300 for. Max rides a Yamah Fazer 600, with the pair originally planning on using the 125s, but with the time constraints of work, the bigger bikes were chosen for the extra speed.

The plan though is to take the back roads and avoid the motorways, the pair allowing seven days for the return trip, with a few days in reserve should they need it. They plan on camping the whole way, and raising money for the cancer charity CURE as they go. The day of departure is penned in for the 3rd of May, with preparations already taking shape. They’re budgeting £250 for fuel to get them there and back, with a little extra for food and souvenirs along the way.

As Mikey explains it, “It’s just an opportunity to get out and go on an adventure. I was born in England but haven’t been back for years. I’ve never seen the Lake District or Devon. I’m hoping it’s the start of something, with the plan being to do Europe next year, again on the same bikes, which I’m sure will do us proud!”