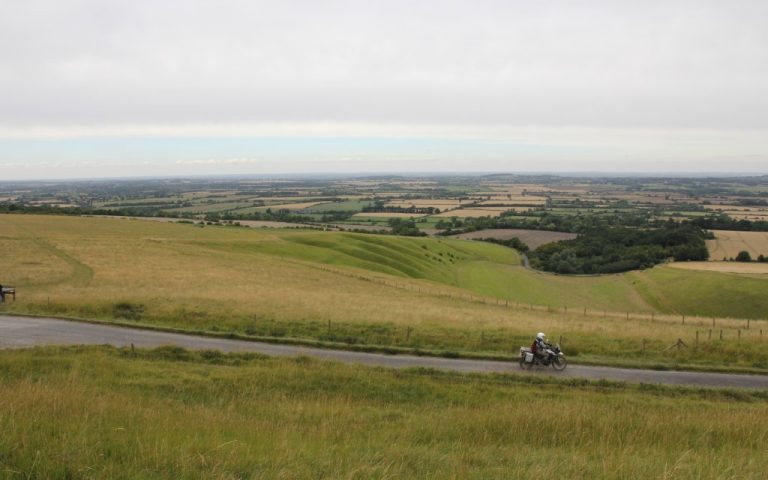 With standing stones, ancient burial chambers, hill forts and crop formations, the Ridgeway promises to be an exciting and interesting ride. Bryn Davies follows the 87-mile path from Overton Hill to Ivinghoe Beacon.

Over the last four issues of Adventure Bike Rider we have been fortunate enough to ride some of the most beautiful landscapes that the United Kingdom has to offer. With each long-distance footpath that we follow from the saddle, we’re reminded of just how great this island of ours is to ride in.

From the Off a’s Dyke path which straddles the border of England and Wales, following a ditch constructed by order of King Offa to keep the Welsh princes at bay, to the delightful and inspiring ride of the Cumbria Way through the heart of the Lake District, each path offers something new. But there’s one constant that remains – the promise of riding some fantastic roads through places that you would never have otherwise considered visiting. 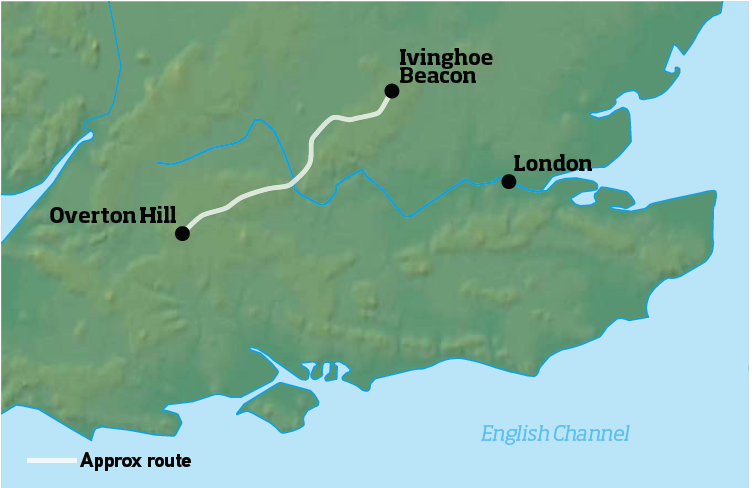 It also happens that each footpath has its own unique history associated with it, and for this issue we travelled south from the fells of the Lakes to Wiltshire, to ride a route that has been the stomping ground for humans and animals for over 5,000 years, the Ridgeway. The 87-mile long National Trail follows an ancient chalk ridge from Overton Hill, five miles outside of Marlborough, to Ivinghoe Beacon in Buckinghamshire, and along its length are reminders of the rich history of England.

It is thought that in the latter stages of the last glacial period, mammoths, bison, wild horses and cattle trampled their way along this route as it offered easier going than the wooded valleys. After the beasts of the last Ice Age came the people of the Stone Age, hunter-gatherers who followed the animals that migrated along the ridge. Eventually, the well trampled Ridgeway became a spinal road of southern Britain, merging with the Icknield Way to the east of the Thames.

Drovers and traders would use the route to connect East Anglia with Wiltshire and Dorset, and these days men and women use the path as a form of recreation. Until quite recently it had been legal to ride the length of the Ridgeway by motorcycle, but that all changed when a series of TROs forbid motorised vehicles from accessing a majority of the route. Between the months of April and October, you can still ride on the first 20-or-so miles of the path, though it’s just as enjoyable to follow the roads that shadow it.

Dotted along the entirety of the route are a selection of some of the best-preserved ancient monuments in the world. From the Stone Age ritual sites of Avebury Henge and The Sanctuary, both constructed some 5,000 years ago, to the multiple Bronze and Iron Age hill forts that line the ridge, there’s a mystical and humbling air that surrounds the ride. If you were to have stood on the Ridgeway since those first animals had plodded along it would provide a brilliant commentary of the advancement of the human race.

As the path moves further east, and over the Thames into Buckinghamshire, despite the proximity to London and the fringe towns, you still have a sense of adventure before you finally arrive at Ivinghoe Beacon near Tring.

Our route began at Overton Hill on an overcast July morning. An early start meant that we could afford the time to fuel up with a full English in Marlborough before beginning what promised to be a fantastic and exciting ride. From the starting signpost, it’s worth crossing the road to take a quick look at The Sanctuary, a neolithic chamber that was connected to the ritual site of Avebury Henge, a mile and a half away, by West Kennet Avenue, an avenue of two parallel lines of standing stones that were 25 metres wide.

The Sanctuary was originally constructed in 3,000BC and it consisted of a circle of timber which was eventually expanded outwards with two further stone circles.

It is thought that The Sanctuary was used as a type of mortuary for bodies to be kept in before, or after, rituals took place at Avebury Henge.

It is also well worth visiting Avebury to have a walk around the standing stones before you begin your ride of the Ridgeway.

As I mentioned, it’s still possible to ride the first 20-or-so miles of the trail, though a series of connecting byways in the green laning paradise that is Wiltshire meant that it was only after 30 miles of off-roading that we were on our first substantial stretch of Tarmac.

Initially, the Ridgeway starts off as a gentle trail, though evidence of heavy 4×4 activity soon presents itself and you’re forced to ride through deep ruts for miles on end. Of course, experience of riding rutted terrain is crucial, and if it’s wet under tyre the ground becomes extremely slippery, to the point where I would recommend sticking to the road.

After a few miles of gentle going, we neared Barbury Castle, an Iron Age hill fort that was constructed some 2,500 years ago. The fort bears little resemblance to castles as most would imagine, with steep earthworks providing the means of defence rather than stone walls and turrets.

The site has seen many a conflict in its time, from the Battle of Beran Byrig where the West Saxons defeated the Britons in the year 556, to the placement of American anti-aircraft guns in the Second World War. As we approached the imposing fort, which provides a commanding view over the surrounding countryside as far away as the Cotswolds and the River Severn, we stumbled upon an old overland vehicle parked up at the entrance to a field of crops.

Closer inspection revealed a sign adorned with the words ‘Crop Circle Mobile Information Unit’ and we were greeted by Paul, a member of the Core Group Initiative with crop circles. He informed us that an impressive crop formation in the shape of an eagle, bearing symbols from various ancient cultures around the world, had popped up out of nowhere on the evening of the 25th July.

It seemed like a convenient occurrence for the owners of small aircraft who were flying tourists over the formation all day, though Paul was there to raise money for the Radiotherapy Unit at Swindon Hospital. After making a donation we jumped on the chance to get a picture of the ABR Ténéré in the crop formation, surely a world first?

From Barbury Castle it’s just a short ride until you’re again presented with more prehistoric wonders. After crossing the M4, and following the signposts for Uffington White Horse it’s tempting to park the bike up at the first opportunity and dismount. Instead, stay in the saddle and follow the single track road as it clings to the side of the hill and you take a right-hand bend. The county of Oxfordshire stretches out beneath you for as far as the eye can see.

Directly in front of you sits Dragon Hill, which is where legend has it, Saint George slew the dragon. Near the centre of the hill’s flat top is a patch of chalk upon which no grass will grow, and it is said that this is where the dragon’s blood was spilt.

Despite the historical inaccuracies with the legend, mainly the fact that Saint George didn’t even set foot in the UK, the views over Oxfordshire are spectacular and as you stand on Dragon Hill you can turn around to see the prehistoric graffiti that is the Uffington White Horse, a 110m hill figure carved out of the chalk slope which makes for an impressive and thought-provoking sight.

From Uffington, the Ridgeway heads towards Goring, the site of the Goring Gap where the River Thames carved out a new route half a million years ago. Crossing the Thames, you then follow an uneventful, though charming set of roads into the picturesque Chilterns, heading to Nuffield and then the wonderfully named Christmas Common.

While it’s uncertain where the hamlet got its name, there are three theories that present themselves; it was where a 1643 Christmas Day truce was held in the English Civil War, it was named so because of the local holly tree coppices, or thanks to the Christmas family, which had connections locally. Today Christmas Common is home to multiple Christmas tree plantations and at least one large Christmas warehouse.

Continuing on from the fairytale-like hamlet you cross another modern-day contribution to the landscape in the M40 and it’s just a short ride through the woodland and lush fields of the Chilterns before you reach Ivinghoe Beacon, the endpoint of our ride. Of course, it’s worth parking up and taking the short walk uphill to the official endpoint of the Ridgeway. The path continues east, where it becomes the Icknield Way, though that’s one for another day.