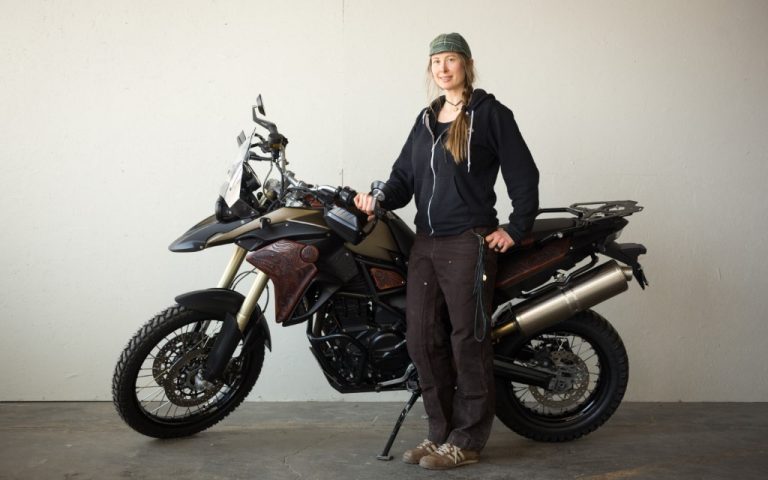 With her bike stored away for winter, Casey Gunschel decided to perform one of the most beautiful modifications we’ve ever seen on a motorcycle.

I’m a professional artist and leatherworker living in Chicago, Illinois, I’ve been riding a motorcycle a few years now and this 800GS is my first bike. Years ago I briefly learned to ride an old Ducati Elephant on the trails in eastern Oregon, but I had long since forgotten when I signed up for a free motorcycle class here in Chicago. Learning to ride proper on the streets of the city was far scarier than old logging roads and a much steeper learning curve! I now use my bike as my sole transportation except for when the weather here gets really bad, which can be more often than not.

This past year saw another of Chicago’s epic, never ending winters where the bike just stood in my landlord’s garage looking unloved. In the past I’ve made saddles, chairs and bags but never anything related to a motorcycle, and I thought covering some of the panels on the bike might be kind of interesting and unexpected – especially because this isn’t a Harley.

I started by molding wet cowhide over the removed panels and lacing up the backsides to hold them taut until they were dry. This is a traditional saddle maker’s technique, and the way holsters and other molded leather goods are created. I then removed the leather from the plastic panels, thinned the edges so that they would easily wrap the edges of the bike panels once re-applied, and carved and tooled my design. I finished the leather panels with dyes, oils, and waxes before gluing them back onto the plastic bike panels. Viola! Instant art bike, ah la duel sport style.

I’m usually at the gas station and wearing a full-face helmet when people want to know what it all means, for which I answer with a meandering and directionless jumble of muffled words. I find most of the creative design work I do for other people enjoyable and usually rather easy. Deciding what I like for myself is like working for the worst client – indecisive and unable to satisfy. Through a bunch of fits and starts the artwork revealed itself as a symbol abstraction about my curiosity towards life, the wanderlust I feel for all of the places I haven’t yet gone, the people I have yet to meet and the connections we share when we embrace all the world has to offer.

I was in Mexico last winter looking at the ancient Aztec culture, and found a lot of similarities to the Haida Indians of the Pacific Northwest. It seemed to me that the language of pictures is universal, timeless, and a good fit on my bike. The Haida/Aztec mash-up worked nicely with the style of the bike and shape of the panels. Added to the mix are a whole bunch of hands. I’ve always loved the hand as a symbol. It’s truly ancient, totally human, and as a crafts person, I think about my hands a lot. They make me who I am. There is a pair of lungs represented on the panels, some wings for speed, multiple animals and a couple of well placed protective eyes (my apologies to BMW for covering their logo).

The bike lives, except for in the dead of winter when I’m afraid a snowplow might run it over, on the street. It gets rained on, cats love to sit on it, birds love to poop on it, and the leather just seems to look better and better. It’s like an old bag that patinas with age. Every couple of months I rub some more beeswax on it to condition the leather and remove any scratches – but basically I just ask the leather to work as hard as the rest of the bike. That meant an early springtime ride out to Sheridan, Wyoming this year through what felt like an eternal snow and sleet storm, and then down to Utah where I dumped it half a dozen times in the sand and rocks. I did eventually add some engine bars, not seen in the pictures, just because it seemed like a good idea.

Other modifications worth mentioning include new mirrors. My own personal grievances are with mirrors that wreck the line of the bike. These have stood up great, even when I’ve dropped the bike (when I originally installed them I was curious if they’d break off but not so!). It wouldn’t be right to not give a shout out to Ray, an excellent engineer and my better half who’s been building custom parts for his own bike. He made the very handy ‘handles’ on the back wheel which work really nicely when picking up the bike or tying it down.

I estimate this whole project took me about 80 hours to complete over about two months, though a chunk of that time was spent fussing over the design. Once I had it down and drawn out the actual work was pretty straightforward. I have a ton of scrap leather lying around so my material costs were next to nothing. Fitting the glued up panels back onto the bike took a little fiddling and a bit of sandpaper on the backsides, but for the most part it all went smoothly and six months and many dead bugs later it still looks great.