The Tip of Borneo 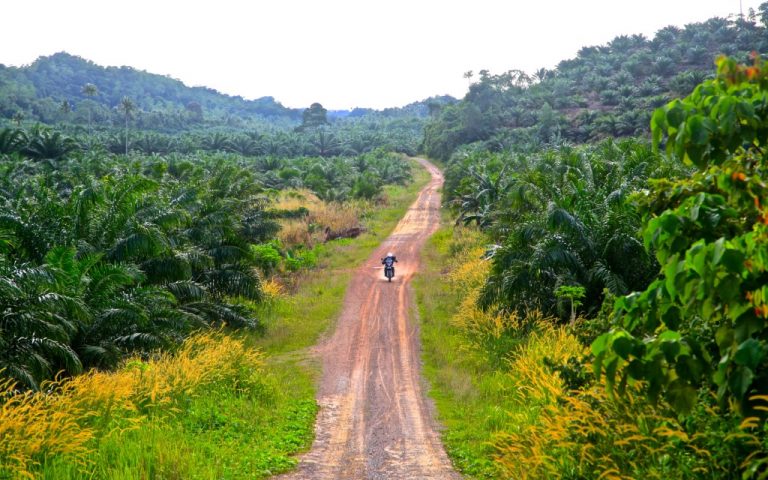 Home to one of the world’s oldest rainforests, an incredibly diverse ecosystem, and a variety of exciting riding terrains, Borneo is an adventure motorcyclist’s paradise. Ian Neubauer explores the world’s third-largest island.

Borneo. The very word evokes images of sweat-soaked explorers hacking their way through the jungle, of headhunters and poison-tipped blow darts, of rhinoceroses, pygmy elephants and orang-utans swinging through trees. For me, it has also held the allure of a destination I’ve long dreamt of exploring on two wheels, a place where I’d follow fire trails and singletracks to remote mountain villages and sleepy river towns. 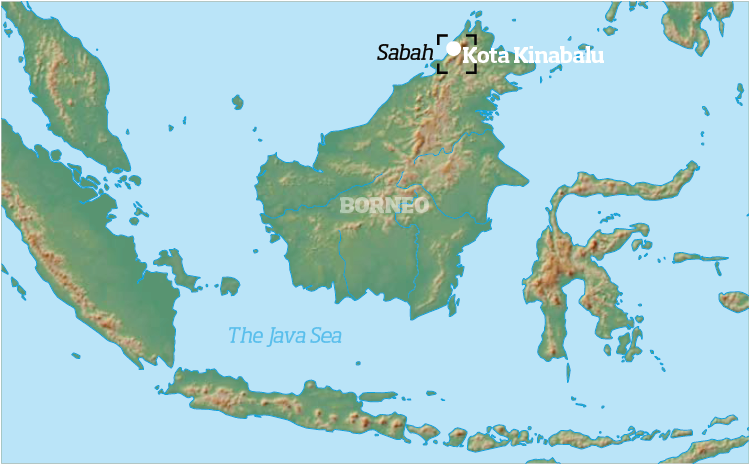 But the Malaysian section of Borneo (73 percent of the island is Indonesian territory) also happens to be home to a network of recently sealed highways and backroads with enough curves and twists to send you around the bend. And best of all, it’s mostly devoid of the murderous traffic that makes touring in other parts of Southeast Asia a game of Russian roulette.

Last November, I spent a week riding from Kota Kinabalu, the capital of Sabah State, to Kudat on the northern tip of Borneo. I rode with Bryan ‘Wild’ Wade, a cantankerous former British motocross champion who for the past eight years has made a crust showing his adopted island home to motorcycle enthusiasts from around the world. Here’s the lowdown…

My Aprilia 650 Trail roars with approval as I drop her into third, lean ever-so-slightly to the left and shoot up along one of a series of long, sweeping inclines comprising the Kimanis Bypass. A former logging route that crosses the Croker Range – a mountainous spine with an average height of 1,800m dividing Sabah’s west and east coasts.

The road was paved in 2010 and has the look and feel of something out of the French Alps. It smashes my preconceptions of Borneo being a backwards and primitive island into a thousand little pieces, but on the plus side offers unadulterated road riding fun.

Upwards it climbs like a phoenix through thickly-forested ridges and troughs, where the steaming heat of the lowland dissipates into cool highland breezes that blow clouds and mist across this breathtaking place on the roof of the world.

After reaching the top I’m left gagging for more, but Bryan insists we stop at a roadside café for a breather. “I get enquiries from experienced riders blagging about how they do 500-1,000 miles a day back home,” he says. “But you just can’t do that here because the heat and humidity gets you and because the roads are so twisty. You have to do it in steps. Otherwise, you lose concentration, and that’s when accidents happen.”

We’re just about to get back on our bikes when a guy in leathers riding a scooter loaded with plastic bags full of clothes pulls over and starts admiring our bikes. He tells us he’s ridden all the way from Kuching, the capital of the Sarawak state, on an 800-mile circuit called the Blowpipe Run. Why? “Because I like to challenge myself,” he says, adding that he plans to ride back to Kuching the very same day. He may be crazy, but you got to admire his determination.

After charging down the southern face of the Crocker Range, we coast into a valley pockmarked with emerald-green rice fields. The heat returns with a vengeance, which Bryan suggests we counter with a swim at a little waterfall he knows. The route takes us along Shit Road, named not for the quality of the surface but for the manure roaming cattle constantly dump upon it.

At one corner we come across a herd of 50 or so camping out on the road, shitting and pissing all over the place. Along with dogs, goats, chickens, buffalo, pigs and half-naked children, they’re just one of the many obstacles you need to be aware of when riding in Asia.

When Shit Road comes to an end, we park our bikes by a hut-cum-general store and set off on a short walk through the jungle. It leads to a freshwater swimming pool fed by a 10m high waterfall in a scene that looks like something out of The Blue Lagoon. My body hisses with delight as I jump in for a swim, gazing at the beauty of some of the 15,000 species of flowering plants and 3,000 species of trees found in what is said to be the oldest rainforest in the world.

“This is Slalom,” says Bryan, as we come to a nondescript intersection. “Look out for the ball bearings scattered on the shoulder,” he adds, referring to gravel.

And with that we’re off, snaking down a 23-mile-long carpet of s-bends, chicanes, swerves and switchbacks. When it comes to an end, it pops us out at the A1, a busy four-lane highway that leads all the way to the tip of Borneo. We follow for a few minutes and then detour again onto another riotous slalom route that Bryan later tells me was part of the old A1. It’s stupendously more pleasurable to ride and the kind of local knowledge that makes riding with Bryan worthwhile.

After rejoining the new A1, we follow it to Kudat, the northernmost town in Borneo. Lunch takes place at a Chinese restaurant, where we order a few filling bowls of spicy pork noodles and then walk it off with a visit to Kudat’s fishing port.

Our timing is perfect: as a school of rickety fishing boats pull in and start unloading their afternoon catch, an impromptu fish market kicks off as hawkers yell out prices for groper, crabs, shark, snapper and giant shellfish dripping mucus-like goo.

The fish are interesting, but it’s the people that make this memory gold. They’re poor, simple, hardworking folk but they are all beaming smiles, posing for photos with their fish, having a laugh and generally making us feel welcome as all hell even though it’s obvious we’re not shopping for fish.

The last leg of the day takes us down a gravel track edged by palm trees hugging the coast. Bryan’s rear tyre kicks up dust as he pulls away, forming a long grey plume against the red sky as the sun begins to melt into the horizon. Half an hour later we arrive at a car park on the headland that marks the very tip of Borneo where the South China Sea meets the Sulu Sea.

We dismount and walk to the very end of the headland. There, I commit a minor but worthwhile infraction by climbing to the top of a giant concrete globe for a pic that takes the cake on those taken by every other Tom, Dick and Harry who pose in front of the ball like normal, law-abiding folk.

The next day, we rise early for breakfast and jump back on our Aprilias. We follow the A1 back to Tuaran, a village about 24-miles north of Kota Kinabalu, and then veer inland back across the Crocker Range along the A4 – a two-lane motorway that leads to World Heritage-listed Mount Kinabalu National Park.

At 4,095m, Mount Kinabalu is not only the tallest mountain in Borneo but the most popular tourist attraction on the whole island. It’s a 5.4-mile hike to the summit and I’m determined to give it a go. At 67 years young Bryan is tough as nuts but he’s not a fan of mountain climbing so he leaves me at the park entrance where I rendezvous with a hiking guide from Amazing Borneo Tours. 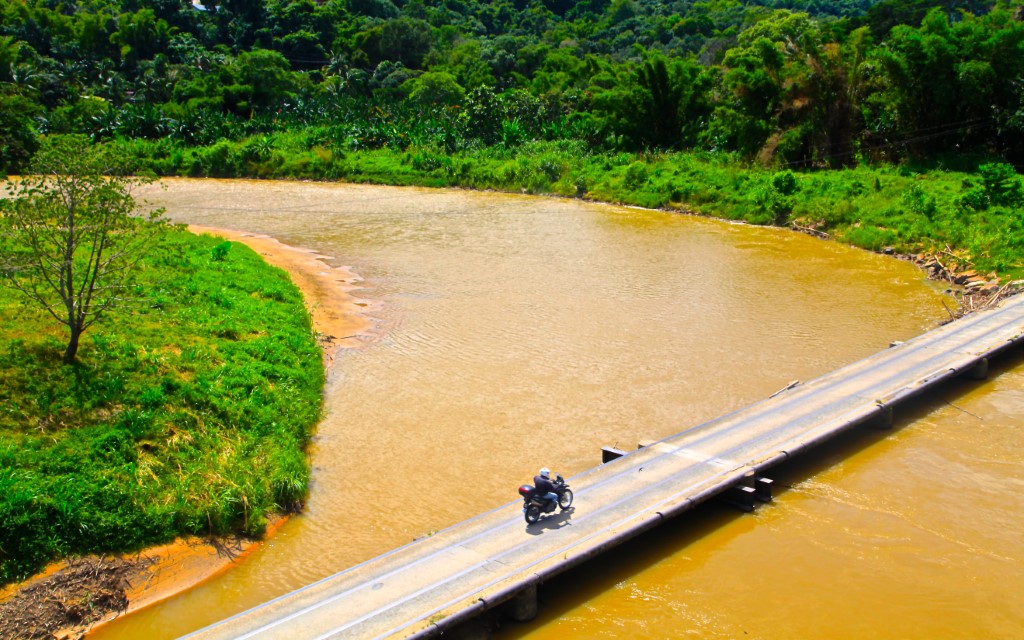 The walk is gruelling, it’s wet and cold, the air is so thin I get blistering headaches and I have to suffer a night in a dormitory at a base camp called Laban Rata, 1.8 miles from the summit with a dozen snoring blokes in a stuffy room with no heating or hot water. But seeing the sunrise from the summit the following morning makes it all worth it. The experience is nothing less than epic.

Two days later, Bryan meets me back at the park gates for the final ride back to the city. It’s Sunday and the A4 is jammed with Bornean road trains – essentially, a truck driving downhill around hairpin turns at about 10mph with its air brakes screeching like a cat on heat and tailed by up to a dozen cars with no hope of overtaking the lead truck on this perilous two-lane motorway.

It’s a different story for us however, zipping in and out of the road trains in a real-life version of motorcycle frogger that zaps me with adrenaline every time I dart back into our lane in the nick of time to avoid oncoming death.

At one point the traffic comes to a complete standstill. It’s followed by the sound of blazing sirens and the sight of a convoy of two or three dozen cops mounted on Honda CBX 750s. I assume they’re clearing the road ahead of them for a visiting dignitary or politician, but instead, it’s a group of bikers, maybe 100 of them mounted on all kinds of road bikes – Beemers, Ducatis, Kwakas, Harleys – probably the cops’ mates out for a Sunday ride.

Throwing caution to the wind, I bump out of my lane, dash to the front of the road train and surge downhill as bike after bike zooms uphill offering the mandatory nod of the helmet or wave of the left hand. Then it hits me – even riding through the traffic here is fun!

“For me the attraction in Borneo has always been the diversity in riding terrain,” Bryan says. “If you’re really quick, there’s all the Formula 1-style slalom you could ever wish for.

If you want to go off-road, there are equivalent gravel routes on most of the tours we do, or we can take you into the jungle and get up to your knees in shit. If you want to take it easy on the tarmac with a pillion and see things like Orang Utan Sanctuary, go on a river cruise or check out some islands and beaches, we can do that too. When you add up all those elements, it really is a biker’s paradise.”