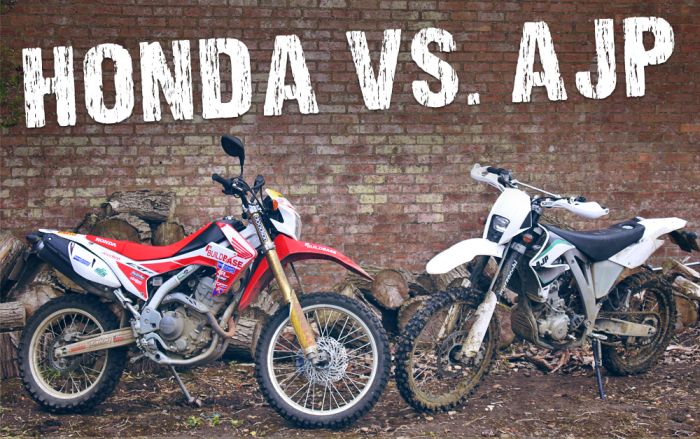 Over the last six months we’ve had quite a bit of fun on the AJP PR5 250 Trail. While the bike’s on-road performance was questionable it was great fun to ride off-road, the combination of light weight and nimble handling making me feel more like a Dakar rider than an amateur enthusiast. But despite the enjoyment, we thought that we had to put the AJP up against another bike of the same value, with a similar spec, to see if it’s worth your hard earned.

Enter the Honda CRF250L. While the CRF has only been in production since 2011, the bike is based on the XR models that had been so popular since 2001. With such a strong heritage, and a manufacturer with a reputation for building bikes that just keep on going, it would make stiff opposition for the little Portuguese machine. 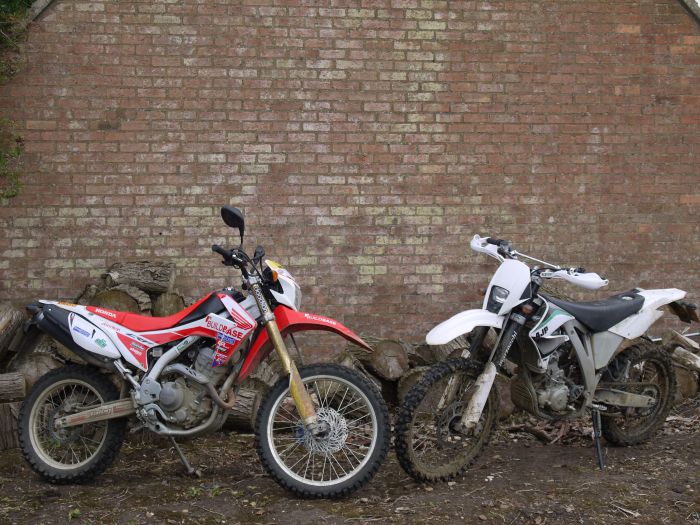 When it comes to the specs list, both bikes are pretty similar. Both sport a liquid cooled, single cylinder 4-stoke engine with electronic fuel injection, the Honda has a 7.7l tank and the AJP can carry 7.5l of fuel. Prices are virtually identical at £4,199 (Honda) and £4,200 (AJP) though the AJP weighs in 24kg lighter than the Honda. What follows is a comparison between the two bikes, based on riding them over varying terrain and living with them for a few months each.

The bikes were ridden in the same manner, by the same rider and neither was subject to more abuse than the other. So, if you’re looking for a lightweight green laning machine and you have, say £4,200 in the bank, which of the two offers a more attractive investment, the AJP PR5 250 Trail, or the Honda CRF250L?

The Honda CRF250L is manufactured by Honda in Thailand, while the AJP is assembled in Portugal. With both bikes costing the same you’d expect the build quality to be virtually identical, though that’s not necessarily the case.

The Honda feels well made, well finished and more of a complete package, while we’ve been slightly disappointed with the overall finishing of the AJP. With exposed wiring, frustrating wire routing, a suicide stand that makes me contemplate the very action and suspension that’s nigh on impossible to adjust, there’s plenty that should, quite simply, be done better. 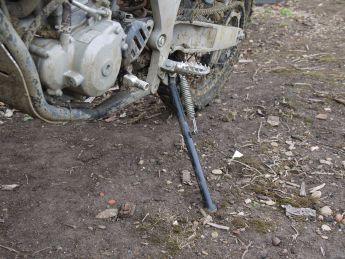 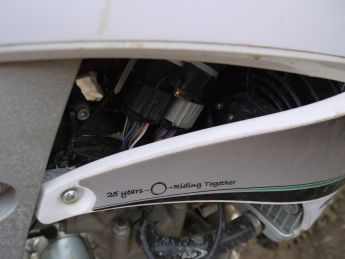 Suicidal side stand and exposed wiring on the AJP

Neither machine is going to set the world alight with its top speed or acceleration, though out of the two bikes on test the AJP certainly feels more inspiring. The 250 engine of the Honda offers smooth power all the way through the rev range, but there’s just not that much of it and it’s a lack of power that might wear on those who like to open the throttle.

The AJP has more grunt, more torque and is a bit nippier off the mark, though not massively so. If I wanted to give a new rider an unthreatening, pleasant machine to ride, that doesn’t make much noise then I’d give them the CRF250L, but for those who want more get up and go and a rawer ride then the AJP will make you smile. 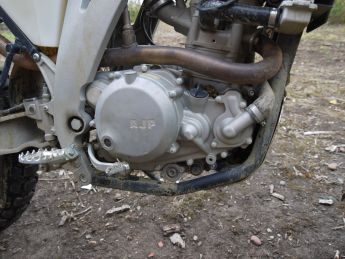 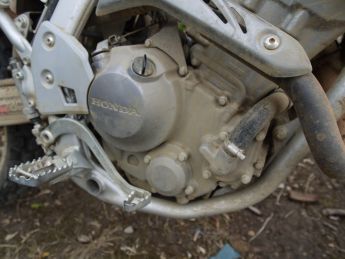 The AJP (left) offers more grunt than the Honda (right)

With the CRF250L coming in at £4,199, and the PR5 250 Trail being just £1 more expensive at £4,200 there’s not much in it when it comes to pricing if bought new. When it comes to resale values, I managed to find just one PR5 for sale on the popular trade sites, and that was a 2014 model with 1,300 miles on the clock and an asking price of £2,850. As you would expect, there were plenty more Honda’s available second hand, though for the equivalent age and mileage you’ll be forking out £3,200. I expect that as the bikes get older the Honda will continue to trump the AJP and hold its value better.

So, both bikes cost the same from new, while the Honda retains its value slightly better than the AJP, but which one offers better value for money? It’s hard to ignore Honda’s heritage and reputation when deciding this. Everything on the CRF feels solid, well made and like it will last. The AJP, however, feels distinctly ‘budget’ and raw compared to the Honda, wiring is sloppy, the plastics brittle and the kickstand almost useless. 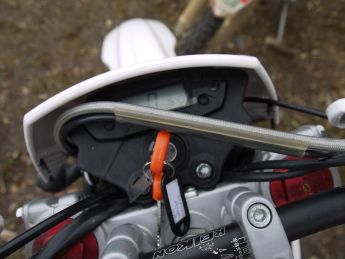 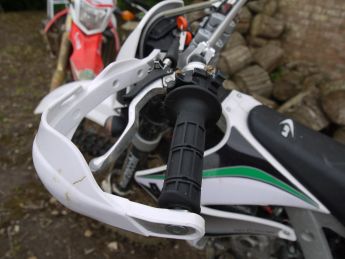 Shoddy wiring and brittle plastics make the AJP feel budget up against the Honda.

Both the Honda and the AJP make riding off-road so enjoyable that you seem to forget about how sore your arse is from a few hours in the saddle. With that being said, as soon as you hit a stretch of tarmac between green lanes the comfort and ergonomics of the bike becomes a bit more important.

We took the AJP over to Wales for an extended ride and the experience wasn’t the best. For a 6’2 rider, the metal fuel cap sits underneath the coxis and begins to hurt after a while. The Honda isn’t exactly the most comfortable either, but the seat trumps that of the PR5 by quite a bit. Both bikes offer the same cramped seating position if you’re over 6′.

Off-road is where the AJP is at home, and where the Honda is equally as comfortable. The weight savings the AJP offers over the Honda equate to 24kg, and that’s enough to make a difference on the trails. Both bikes feel decidedly gutless, though the AJP offers a bit more oompf. When they were subject to a steep, muddy hill climb the AJP hauled my 18st mass up without straining too much.

On the other hand I felt sorry for the Honda as the engine sounded noticeably tired getting me up there. The AJP offers a higher ground clearance, though this is only when there’s no rider on the bike – the amount of sag when loaded means that it’s easy to bottom out on rock steps and tree stumps as you’re travelling, though the same can be said of the CRF. 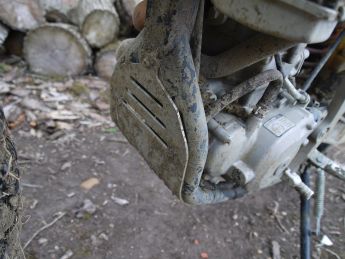 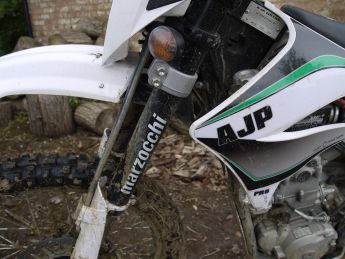 The AJP has greater ground clearance but sags when loaded

Of course, if you’re just planning on riding on tarmac then neither of these bikes are going to be top of your list. Though if we had to choose either of these for an on-road voyage, it would be the Honda, without a doubt. The Honda feels more assured on tarmac than the AJP, which actually feels quite dangerous at speeds.

Both bikes come complete with indicators and a horn but superior suspension and comfort both went in favour of the CRF. They both also sport near useless headlights and I wouldn’t be overly comfortable riding them on the roads after dark without an upgrade.

Having ridden both machines in a variety of conditions, were I to buy one over the other I would choose the Honda CRF250L. The AJP arguably offers a more fun off-road experience, but the Honda does it while feeling solid, reliable and comfortable. In the UK it’s inevitable that you’re going to have sections of tarmac between green lanes, and riding the PR5 on these stretches is not a very fun experience at all, while the CRF is just as at home on the road as it is off it.

When both bikes come in at the same price, it’s worth taking into consideration the overall finish and build quality and there’s no doubting that the CRF is a more polished machine, and it’ll also get you a bit more cash back when you decide to sell it with a better resale value than the AJP. 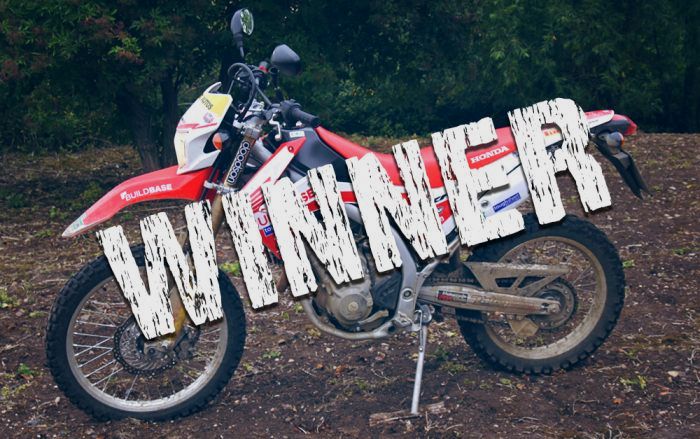