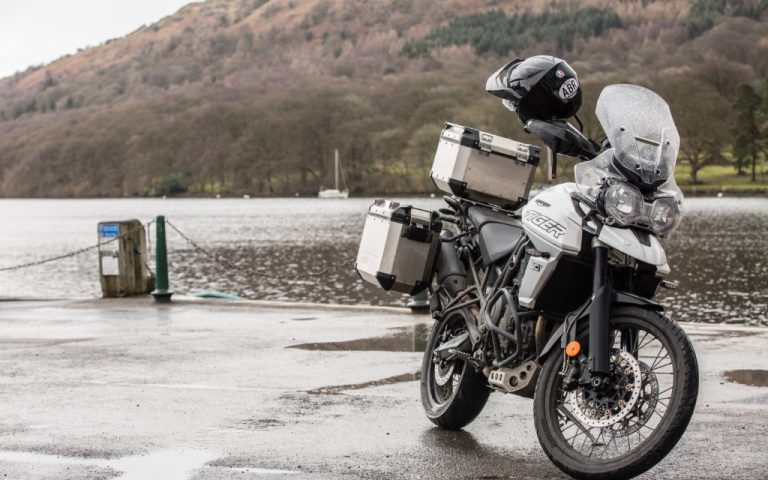 James Oxley is handed the keys of the Triumph Tiger 800 XCx.

It was with some reluctance that ABR Editor Bryn handed me the keys of the Triumph Tiger 800 XCx. It’s been his regular ride throughout the winter and no matter how bad the weather, he usually had something good to say about a journey onboard the British manufacturer’s mid-weight adventure bike.

But now it’s my turn to throw my leg over it, and I’m chuffed to bits. You see, I was 12-years-old when the Triumph Tiger first registered in my mind. I was reading a book my dad handed me by a fella called Ted Simon who had ridden around the world on an earlier version of the bike. That book was Jupiter’s Travels and it had a big impact on my life, as it did on many others, I’m sure.

My first ride on my new Tiger was a 530- mile journey to Cumbria’s Lake District to plot this issue of ABR magazine’s TomTom Discovery Route (you can read about it here).

Immediately, the Triumph felt at home cruising at motorway speeds. It was planted and predictable at 70 mph and a push of the cruise control button made an effortless ride even easier.

That was, when I eventually managed to turn the cruise control on. The button is hard to find in the dark and even harder to actually push wearing thick winter gloves. It’s one of those annoying little issues that you’d think would be avoidable.

On a cold, wet journey up the M6, the screen on the Tiger provided me with good wind protection and the heated grips, featuring three settings, radiated some heat.

They aren’t the warmest I’ve tried, but they are nowhere near as anaemic as the heated grips on some other manufacturer’s bikes.

The seating position on the Tiger leans you a little further forward than on other adventure bikes, but it’s a comfortable stance to be in on the road.

The same can’t be said for the seat which had my backside screaming for a break within the hour. I suspect this is due to the more forward seating position putting pressure on different parts of my derrière than it’s used to.

Once up into the fells of the Lake District, the Tiger was a joy to ride. It didn’t put a foot wrong whether it was leaning into sweeping bends at speed or negotiating tight turns on the steep climb up the Hardknott Pass.

The Triumph feels substantial, and I mean that as a compliment. While I may not be as happy throwing it around, in the same way, I would the nimbler Honda Africa Twin I’ve been riding lately, I’d have no qualms about packing my panniers to the brim and heading off across Europe on it with my wife as pillion.

I haven’t had the chance to take the bike off-road yet, but I do have a couple of concerns already. I spent a bit of time standing on the pegs, mainly to ease my aching arse, and the stance felt awkward, forcing me further forward than I’d like to be. Again, I hope this is something I’ll get used to.

I also found my forearms hit the wing mirrors when in the standing position. I’ll need to have a play around to adjust them before I head off-road.

Early niggles apart, the Triumph Tiger 800 XCx is an impressive machine that inspires confidence and, most importantly, is a lot of fun to ride. I can’t wait to take it on my next adventure for ABR.

Oh, and a word of warning for Tiger owners out there. Be careful of your indicators. They’re quite rigid and we’ve snapped one of ours already. If you’re reading this Bryn, it was broken when you gave the bike to me, I promise!