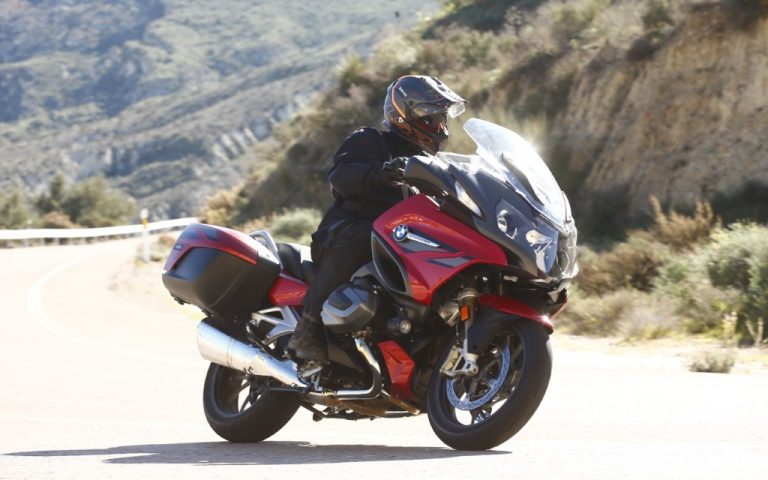 You have to feel sorry for touring motorcycles. Go back twenty years and if you were planning a big trip or covering massive distances, then you’d immediately have looked to the big tourers to get the job done.

From the bus-like dimensions of the awesome Honda Goldwing, the aircraft build quality of an FJR or, as many would have chosen, the Teutonic efficiency of a BMW.

Clad in a matching Motorrad touring suit, you’d have loaded up your colour-coded panniers and top box, popped a Chris Rea CD into the sound system and headed for Dover.

But, like the favourite elder child that has been outshone by his younger sibling, touring motorcycles have been totally eclipsed by the adventure sector.

The ranks of swooping, all-enclosing fairings and integrated mirrors have been replaced with the jagged contours and towering poise of off-road inspired machines that can tackle everything from African piste to German autobahns without pausing for breath.

Against this competition, can there still be a place for the tourers?

Well, BMW clearly thinks so, and as one of the brands with that impressive back history within this sector, it should know.

The RT series has been plugging away since way back in 1978 when it was powered by the classic air-cooled boxer engine, but for 2019 the bike comes bang up to date alongside its adventure brothers, ditching the 1200 lump and getting the same astoundingly powerful 1250 Shift Cam engine.

If you’ve already read the review of the GS in issue 49 of Adventure Bike Rider, and that of the GS Adventure in this month’s magazine, you’ll know just how much we like the new motor. But how does it work surrounded by all that plastic and Perspex?

Well, with BMW sharing the launch of the GSA with the reveal of the new RT, it would seem churlish not to sling a leg over the big fella and see for ourselves…

First off – the bike is massive. The front fairing looks almost carsized, with its twin lights either side of a central headlight, and the wide fairing heading back alongside the similarly enormous fuel tank and over those iconic barrels on either side of the body.

We’ve got two bikes to ride, one in a bright orangey-red and the other higher spec model in a rich, dark blue, both of them sporting the expected colour-coded panniers that serve to give the rear of the bike much the same width as the front.

The detailing of the bike is beautiful, the considered combination of exposed engineering and enclosing bodywork adding up to a high-quality feel all round.

Our first chance to actually ride the RT comes as we are getting the photos sorted for both this and the GSA.

If I were to pick an ideal location for my first ride on box-fresh 279 kg eighteen grand motorcycle, I wouldn’t necessarily opt for a gravelly layby halfway up a set of tight hairpins in rural Almeria, but the BMW instantly surprises with impeccable handling from the get-go.

Despite the width upfront, the centre of the bike is manageably sized and the reach to the wide bars is well judged. The balance is spot on too, just like the GSA, and rapidly inspires confidence that I wasn’t expecting.

Leaving the curves behind and onto the straights, the RT is laughably easy to ride with a creamy smooth gear shift and that stunningly powerful motor.

Accelerating up through the box can be done swiftly thanks to that torque upgrade in the bigger Shift Cam lump, and, once in sixth, the RT will cruise all day at three-figure speeds.

The seat is La-Z-Boy comfortable, the pegs are well-positioned, and the wide, clear screen can be raised electronically at the push of a button to cut out almost any wind blast. And if you choose the ‘Exclusive’ pack, you can switch on the radio, pump up the volume and let the day slip away to Gregory Porter – nice!

But if there’s one way the RT lets itself down, it’s with the annoyingly old school dash. When the GS range is now sporting the latest TFT tech, the big analogue speedo and tacho at either end of the wide and clunky dash seem to pull the RT back to the 70s.

OK there is a small TFT display about the size and shape of a car radio where you can toggle through the numerous ride modes, suspension and ABS settings that come as standard, but when the bike is quite so advanced the mix of technologies feels clumsy and lazy.

But that’s maybe just details because, with a bike this easy and comfortable to ride, peering at the dashboard is the last thing you should be doing.

The new RT is a truly exceptional and immensely enjoyable motorcycle and if your travels won’t be taking you away from the blacktop and you want to arrive in style, then it definitely worth considering.