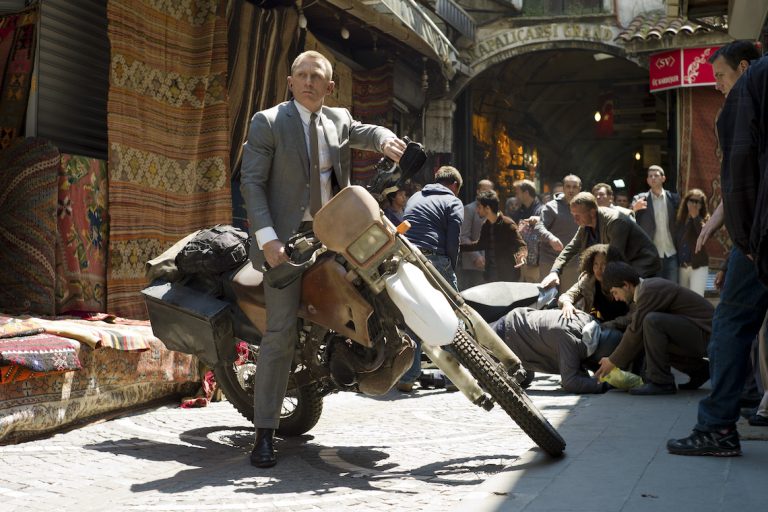 Meet Powell, Gary Powell, whose not-so-secret 007 mission is making mind-blowing motorbike movie magic. With big-name blockbusters including The Bourne Ultimatum and GoldenEye under his belt, his latest Bond stunt project, Skyfall, is out now. Here he tells us about the thrilling ride from film stunt man to award-winning stunt coordinator

Born into a family of film stunt men and with a keen interest in motorbikes, you could say Gary Powell’s career path was already written in the Hollywood stars.

“I was 14 when I started riding bikes. I visited a film set my brother was working on and there were loads of bikes there,” explains Powell. “I showed an interest, then [my brother] kindly went and got me one.”

From that moment on Powell developed a passion for Motorcross, learning how to jump a bike and emulating the stunts he saw on TV programmes such as Chips – “A guy did a wheelie on an old XR 500 while being chased by the police and I thought it was the coolest thing ever!” – and now, 22 years later, Powell has become one of the most admired stunt coordinators in Tinsel Town. He’s devised exhilarating action sequences in films such as The Bourne Ultimatum, Indiana Jones and the Kingdom of the Crystal Skull and the last three Bond films, including new release Skyfall, which will see one of the most jaw-dropping motorbike chase scenes in James Bond history.

You could say Powell has carried on in the family business following in the footsteps of his elders and siblings. “My dad and uncle were stunt men and my brother too, so obviously, because the family was so heavily involved, it naturally took me that way,” he says.

It was going to watch his family members perform that cut Powell his first break aged only 11, but his debut ride in front of the camera wasn’t to be on a motorcycle. “I rode a horse in one of the Carry On films,” laughs Powell as he reminisces. “Basically my dad and brother were already in the film and I just happened to be there when they were set to shoot one of the smaller actors riding a horse. It was the typical thing where the actor said he could ride, but when it got to shooting it turned out he couldn’t. Looking around the set they spotted me and I was about the right height, so they stuck me on the horse. Not quite the same as riding bikes, but I remember using the money I got from it to go out and buy a 10-gear racer: it was fantastic!”

The industry in which his family was immersed, combined with his own love for Motocross and his determination to perfect what he saw other riders do, led Powell to great success early on. “Having that background has definitely given me a good understanding of flight and movement and what vehicles can and can’t do, whether it be a bike, a car, truck or even a tank,” he says.

Powell first showed off his stunt-riding skills in 1992 film, Year of the Comet before making his Bond début in GoldenEye, and later appearing in Tomorrow Never Dies and The World Is Not Enough.

“Doing stunts was the best job ever when I was younger,” says Powell. “When you’re in your 20s and you get on the bike, you’ve got stamina; you do the stunt, brush yourself off and do it again. Then you get into your mid-thirties and you realise it’s still hurting the next day, then days turn into weeks and the aches and pains are still there. When I got to that point I realised I needed to do something else,” he says, with a hint of sadness.

Realising that his stunting days were over, but wanting to remain in the industry, his next career move was as clear-cut as his introduction to film stunting all those years earlier.

“[Becoming a stunt coordinator] was a natural progression,” admits Powell. Having worked his way up through the ranks and drawing on his vast experience of performing the stunts himself meant Powell was particularly suited to taking on this new role behind the camera.

In charge of all of the stunts in the film, it’s the coordinator’s responsibility to plan the jaw-dropping feats, organise people to do the stunts, arrange meetings with other departments such as special effects, the art department, and director of photography, as well as running the stunt ideas past the director.

Taking on this role wasn’t an easy transition for Powell, though. “When I first started coordinating I didn’t like it,” he admits. “I was getting people to do the things that I wanted to do, like driving cars really fast, riding the bikes, crashing this and that; they were having all the fun and it seemed like I ended up with the serious job.”

As with taking on any new position, Powell had to learn the ropes. As the films he was coordinating on increased in status, however, he found that he was able to explore a side of stunting he’d not experienced before.

“After a while, as the jobs get bigger, the creative side of stunting really comes into play,” he says. “For example, in the script for Casino Royale all it said about the opening was, ‘what follows next is an amazing foot chase,’ then the rest is down to [the stunt coordinator].”

It was the opening Parkour/Free-running foot chase in Casino Royale that won Powell the World Stunt Award for Best Stunt Coordinator and has secured his licence to continue thrilling Bond audience’s since, as he dreams up bigger, better and more mind-blowing stunts for the MI6 agent.

Audiences won’t have seen Bond tear through the streets on the back of a bike since GoldenEye. Although we were privy to a little taster in Quantum of Solace, when Daniel Craig sped to the docks to save a damsel in distress on a Montesa Cota 4RT dirt bike, it’s his latest stunt project, Skyfall where Powell has drawn on his motorcycle skills to really show off his flair for high-flying bikes.

Using Honda’s CRF 250 R, Powell has allowed his love of Motocross and his dangerous imagination to think up what’s set to be a pulse-raising chase scene across the rooftops of Turkey.

“We were originally going to do something else with the [CRF 250 R], but then when we got [to Turkey] we thought, ‘ah it would be great to go up there,’ and so we did!”

Once the seed was planted, Powell started planning the logistics: arranging the necessary ramps to be built, taking measurements of the location and deciding what jumps could be done before beginning to rehearse some of the stunts back in England, to ensure everything ran smoothly when filming began in Turkey. Meanwhile, numerous trips were made back to Turkey, to check everything was being built to Powell’s specifications and that both teams were on the same page.

Getting experienced riders Robbie Maddison and Lee Morrison to test the waters, Powell let them rip on the rooftops once everything was in place, arguably the most satisfying part of the job, he says. “They were going at like 50mph, riding across pieces of concrete that were no more than three foot wide. [The sequence] was very technical, because of the speeds we were doing, but also because we had another Honda motorbike rigged with a camera up there too, which was heavier and had to follow the other bikes a lot of the time.”

Surprisingly it wasn’t the stunts themselves that were so much the danger. “The rooftops were laden with sharp objects, broken glass and debris where [residents] have put up satellite dishes and air-conditioning units and things have been broken and not repaired,” comments Powell.

Luckily there were no injuries thanks to careful planning, but choosing the right bike for the stunts also helped limit accidents. “The Honda CRF 250 R was a natural choice to go with because it gave us so many options: it’s lightweight, but has plenty of power, giving the stunt guys enough to do what they wanted to, yet it wasn’t such a handful that Daniel [Craig] couldn’t get on it and ride. I have to give credit to Honda as it’s superseded bikes in the past – the [CRF’s] handling as we were hitting square curbs and jumping through windows was fantastic – and in terms of it being great for film stunting, I’ll stick with this bike until the next thing comes along that betters it,” he says, enthusiastically.

Now at the top of his game and having given us the hottest two-wheeled chase scene in a Bond film, what’s his tip to becoming a successful film stunt rider or coordinator?

“Common sense. So many times I’ve had people come up to me and say, “I could be a great stunt man; I’m fearless.” That’s the worst thing to say, because if you haven’t got any fear you can’t be aware of the danger.”

Skyfall is out in UK cinemas now