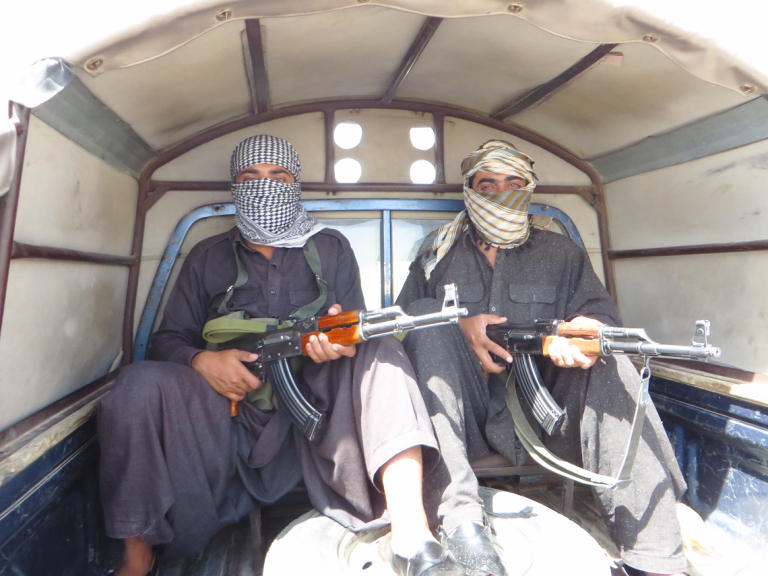 Having dreamt about the day for months, Dan Skeates finally faces his fears as he crosses the dangerous Iranian border with Pakistan

I had walked down hotel stairs to checkout hundreds of times. It was 6:45 am and already hot and dusty outside, I had dreamt and worried about this day for almost a year.

I have responsibilities. Two grown-up children and other family members, why couldn’t I resist the temptation? What is it about me that drove me to enter such a dangerous place?

I can still turn back, no one is making me do this. I know other people who took a different route. Just go back, retrace the path and there will be no danger. Why take this route?

In 1968 my dad decided to take the whole family to Dubrovnik, Yugoslavia in his beat-up car. I was two years old. The writing was on the wall, I was always going to travel, I have most of my life.

I gave up my secure job, rented my house out and, with tears rolling down my face, said my goodbyes. That was 88 days ago, it was now the start of July 2014 in the middle of summer and Ramadan.

I wasn’t alone. I had met a Canadian and a German on an overland travel forum, it felt more secure and less stressful to have company. We arrived in Zahedan, Iran the previous afternoon, checked into a hotel and relaxed. We knew the following days would be full-on, with danger in the air.

It was 6:45 am and as I got to the bottom stair I could see it was already hot and dusty outside. I went to reception to get our passports but the receptionist seemed to ignore me. I sat down for a while and then returned, again she ignored me. We had wanted to get going early to miss the midday heat.

15 minutes later four armed soldiers I walked in and the receptionist handed them our passports.

I was ‘living the dream’ according to many people. I had given up the ordinary life for travel and adventure, I left England with the intention of heading east.

I would get up early and ride into the sun, I knew it would take me across Europe and into South East Asia, maybe Australia. The only decision was whether I travelled through Central Asia or Pakistan.

As it happened, I had no choice.

I had been reading about overland travel for years. It seemed that the most intrepid travellers crossed Iran into Pakistan before continuing to India. It was my turn to try and be intrepid.

Many people were deciding not to cross Pakistan, there were other routes available. Head south to the Persian Gulf, get a boat to Dubai and then a plane to India.

Or, and what most people do, head north through the ‘Stans’. Why couldn’t I see either of these routes was the obvious choice to be safe? What was it that drove me and others to take the dangerous route?

I had read about the dangers weeks before, there were frequent shootings, bombings and kidnappings.

Why did I want to ride a motorbike along one of the most dangerous roads in the world?

When you cross from Iran into Pakistan you arrive in the town of Taftan, in the province of Balochistan.

For many years The Baloch Nationals have been fighting the government to secure independence. Also, the Taliban are fighting ‘Shia Muslims’.

The road through Balochistan runs south of the Afghanistan border to Quetta, the main provincial city. For two days you ride along a rough desert road, stopping in small villages to get water and snacks.

Bombings are frequent along this route and only a week or so earlier the main judge from Quetta was kidnapped. Why couldn’t I take another route, why?

As soon as I saw the soldiers I knew they were here for us. It was just a 30-mile ride, but only the week before, Baloch Nationals had fired rockets at the border buildings.

We thought 30 miles, even on a bad road, should only take a short time.

We left the hotel in convoy, a dodgy old police 4×4 in front and one behind. On the back of each were two soldiers with AK47s, I felt a combination of excitement and nervousness.

I had dreamt and fantasised about this day for so long. On the outskirts of Zahedan, we stopped and had to wait for three hours in the soaring morning heat.

An old SEAT with European plates pulled up, a young Spanish guy, his French girlfriend and their dog were joining the convoy.

The morning sun climbed higher in the sky and finding shade wasn’t easy. Whilst waiting, one of the guys spotted the chain tensioning mechanism had broken and was half hanging off my bike.

With no time for a comprehensive repair out came the cable ties and shortly after we were off.

The temperature had risen to over 45 degrees as we followed the 4×4 into the desert.

Canadian, German and English bikers and a young couple from Spain and France with their dog, all following a passion for adventure.

It felt normal, not odd at all as we made our way east to Pakistan.

Our passage was slow as we stopped many times to change guards on this short journey. So many times in my life my imagination has envisaged a worse situation than reality serves up.

Maybe it’s because I’ve travelled before? Maybe a part of me wants to experience danger? It was 4:30 pm when we eventually arrived at the border.

I wasn’t expecting a modern facility with x-ray machines and everything you would expect on arrival at Heathrow. We were in the middle of the Kharan Desert and conditions were extreme.

The border should have closed earlier in the day but someone had informed them we were on our way. They stayed open and processed us efficiently, stamping our passports and carnets. Everyone was friendly and helpful in Iran.

We were the last to leave the country and as we rode off the border guard said, “be careful there’s a war between the Shias and Sunnis over there”. Whilst I knew about the conflicts I was riding into, it was a timely reminder to have respect.

Take it easy, blend in, smile, yes, smile. A smile is an international language for ‘I’m ok, no threat, I come in peace, I’m one of the good guys’.

As I heard the rusty gates slam behind us I looked out over Taftan and thought it looked pretty wild.

Having come through the Iranian desert I was used to dry, unwelcoming landscapes, but this was different. It felt like the ‘Wild West’, dry, hot, so hot, rough, dangerous, unwelcoming.

Not the sort of place you tell your mum you’re going to visit.

The Pakistan border facility wasn’t a match for the Iranian one. It was no more than a shed with a tin roof that could have been mistaken for an animal shelter.

The guards were wonderful and welcoming and they stamped our passports and carnets efficiently. Maybe, like the Iranians, they too knew there were some Westerners arriving late. Perhaps their dinner was on the table getting cold? It was 5:30 pm.

Just 10 ¾ hours earlier I went down to reception to collect our passports. Now 30 miles and a lot of emotions later we had made it to Pakistan. I was wearing a massive smile.

Pakistan, the day had at last arrived. We weren’t given any choices about where we could go. The Pakistani military police made us follow them over the sandy terrain to the prison outside of the main town.

Taftan, it seems, is no place for adventure overlanders.

They opened the rusty gates with barbed wire on top, hurried us inside and locked the gates behind us, pointing to where we should park the bikes.

It was a small, dilapidated jail-based around a dainty courtyard about the size of a tennis court. As I passed through the gates the first thing I saw were prisoners standing to my right behind the bars of their cells.

Others had their faces pressed up against the steel grills of the windows.

Straight ahead were some empty cells and to the left were the guard’s offices. We were ushered inside one empty office and told it was where we would stay until the morning.

There weren’t beds or chairs, only a dirty, green short pile carpet with an old desk in the middle of the room.

The windows had bars and I wasn’t sure if they were to keep us in or the prisoners out.

The guards sat in the courtyard with their AK47s not far from hand. The young Spanish and French couple were taken elsewhere and we got on with it in the ‘Pakistan Levies Taftan Jail’.

I felt safe with the prisoners locked in their cells, the guards looking over us and barbed wire on the rooftops.

I didn’t see a sign saying restaurant at the Pakistan Levies Taftan Jail, in fact I didn’t see the prisoners eat at all. We unpacked our sleeping bags and shared what food we could muster.

I had a bag of dried fruit and nuts which we added to some biscuits the German guy had and some fruit the Canadian guy had. Taftan is no holiday resort.

We travelled 185 miles on the first day to Dalbandin where we were rushed into a hotel on the edge of the town and were not allowed out.

Along the road we stopped at least 10 times to sign in to the local police area. Counting up the names of the people who signed in before us I estimated that no more than two foreigners come along this road each week.