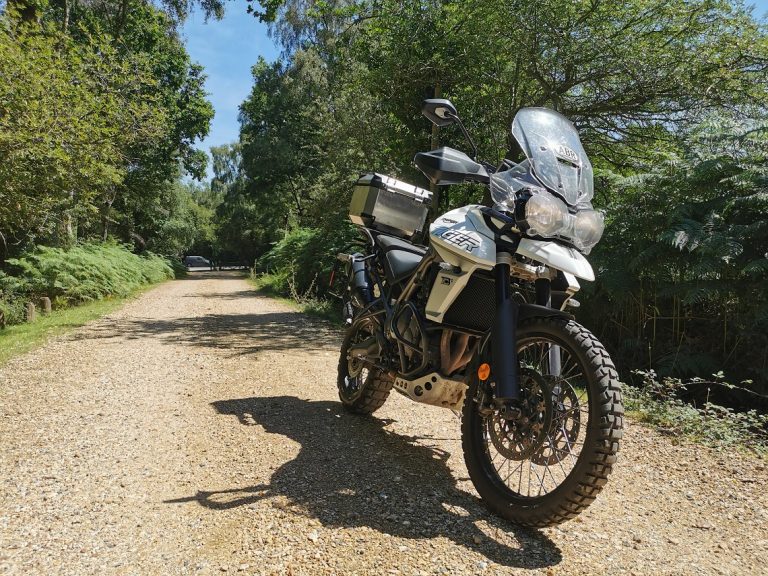 These two different styles of tyre highlighted to me just how versatile the Tiger 800 XCx really is. With the off-road rubber on its rims, the Triumph looked hard as nails and ready to tackle anything in its path.

During a spot of green-laning in Wales, the bike’s sublime WP suspension glided over every lump, bump, rock and rut that was thrown at it. In tricky off-road situations, the Tiger’s triple engine sometimes receives criticism for not having as much low-end grunt compared to its twin-cylinder adventure bike rivals.

However, it hauled me up steep rocky inclines and through deep water crossings without a whisper of argument. The Tiger simply inspires confidence off-road. Yes, it does hold its weight a little higher up than some bikes, but it still feels nicely balanced and is fun to throw around.

The reality is I run out of talent far sooner than the bike ever would. However, slip it into off-road mode and the electronic wizardry stretches my riding skill as far as possible.

Despite its capabilities, I don’t think the Tiger is best in class off-road when it comes to mid-sized adventure bikes. For example, the KTM 790 Adventure R or Tenere 700 will outperform it on the trails. However, what does push the Tiger 800 XCx towards the top of the class is its supreme competence on the road which, if we’re honest, is where most adventure bikes spend the majority of their lives.

A couple of days after switching out the Triumph’s knobbly tyres for more road-biased rubber, I took a Friday night ride from the ABR offices in the Midlands down to East London to stay with some friends. The Tiger’s 93bhp engine purred along the M40 effortlessly, hauling myself, my wife and our weekend luggage with it.

In fact, over the past few months, the bike has proved a superb long-distance mile muncher, with decent weather protection and a comfortable seating position. I do wish Triumph had made the 19l fuel tank larger, but I usually manage to get around 200 miles between fill-ups depending on how aggressively I ride. An hour or so into our journey, my wife and I turned off the motorway and began navigating our way across central London through the snarling Friday night traffic.

The Tiger proved a formidable commuter as we filtered between lines of cars and squeezed through tiny gaps, making quick work of the motoring mayhem unfolding in front of us. Inevitably, a lot of stopping, starting and slow-speed manoeuvring was involved. This meant I was grateful I could reach the floor with both feet, especially with a pillion rider raising the bike’s centre of gravity.

I was also thankful for the Tiger’s commanding road presence, blindingly bright headlights, and relatively loud exhaust note which meant we were seen and heard by plenty of drivers in their mirrors, many of whom moved out of the way for us.

Despite this, the Tiger was also narrow enough to slip through the majority of gaps in traffic and I soon found myself keeping up with the 125cc bikes and scooters in their mad dash across the city.

Eventually, we reached our destination in East London and I found myself grateful yet again that I was riding such a competent machine. It may not be the outright best at any one aspect of motorcycling, but it has a strong claim to being the number one all-rounder.