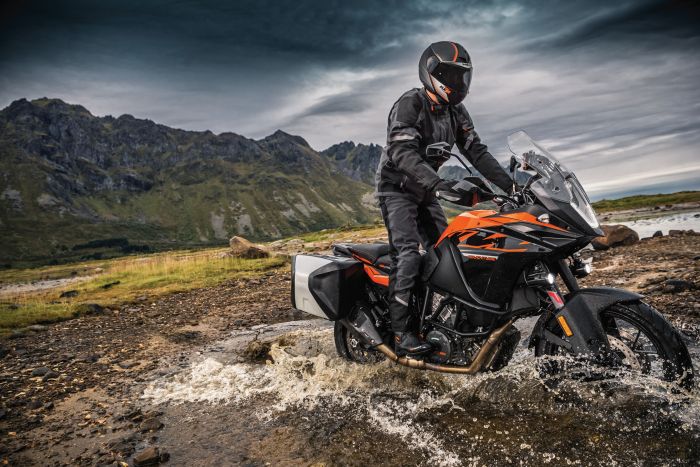 Alun Davies returns from Corsica where KTM had chose to launch the new KTM 1090 Adventure. He gives us his full review of the bike.

A couple of years back in Gran Canaria I attended the launch of the new 1290 Super Adventure and 1050 Adventure. Our first ride-out was on the larger machine and such was the positive impact of the 1290 that anything less than a trip in the space shuttle piloted by Raquel Welch in her One Million Years B.C. prime, to a pub with free beer was likely to underwhelm.

And so, it was with the 1050 Adventure, the poor bike didn’t stand a chance and I recall the talk amongst the assembled world journalists at the after-ride dinner being almost exclusively dominated by the larger machine with its ground-breaking technology and blistering performance. In other words, it was akin to meeting Nora Batty just after Raquel at a speed dating event.

I’m obviously being a little unfair to the 1050 here and taking liberties with the term journalist, but the contrast and effect could not have been more vivid. However, what we’d all overlooked was that Nora was indeed a fine actress and, given a level playing field, probably equal too if not better than Raquel when discussing personality.

The fact is, the 1050 was, and still is, a great bike. It’s just that the 1290 was so much more stunning in every headline figure and feature that the scribes felt compelled to compare the two machines and that was just simply not a valid way to go about it – in the same way a film critic could not compare One Million Years B.C. to Last of the Summer Wine. 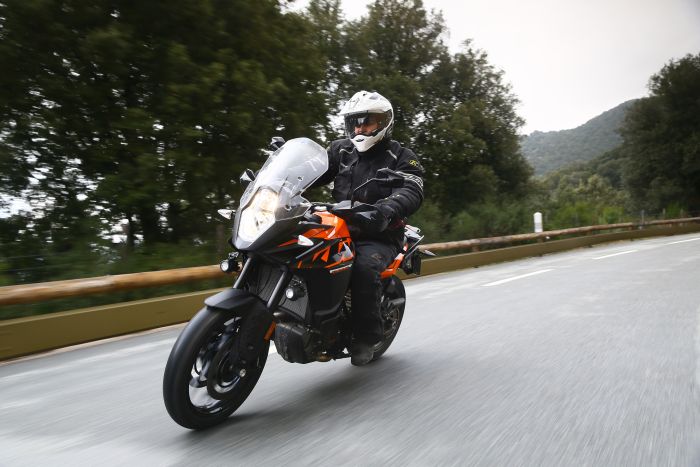 They were, and are, different bikes at different price points offering differing levels of performance and features and aimed at different riders. Yes, there’s too many ‘differents’ in this sentence but I’m determined to make a point and correct a misconception.

What also didn’t help was that KTM made such a big play on the fact that the 1050 was an entry-level 95bhp bike which could very easily be made A2 compliant. The net result was that everyone went away feeling underwhelmed by the 1050 and focused on the entry-level credentials, A2 licence holders, hair curlers and wrinkled stockings.

Anyway, I’ve just returned from Corsica where KTM had chosen to launch the superb and revitalised 1290 Super Adventure S alongside the new 1090 Adventure. And whilst the new 1290 is full to the brim with technology, power and performance the 1090 is… Groundhog Day anyone? 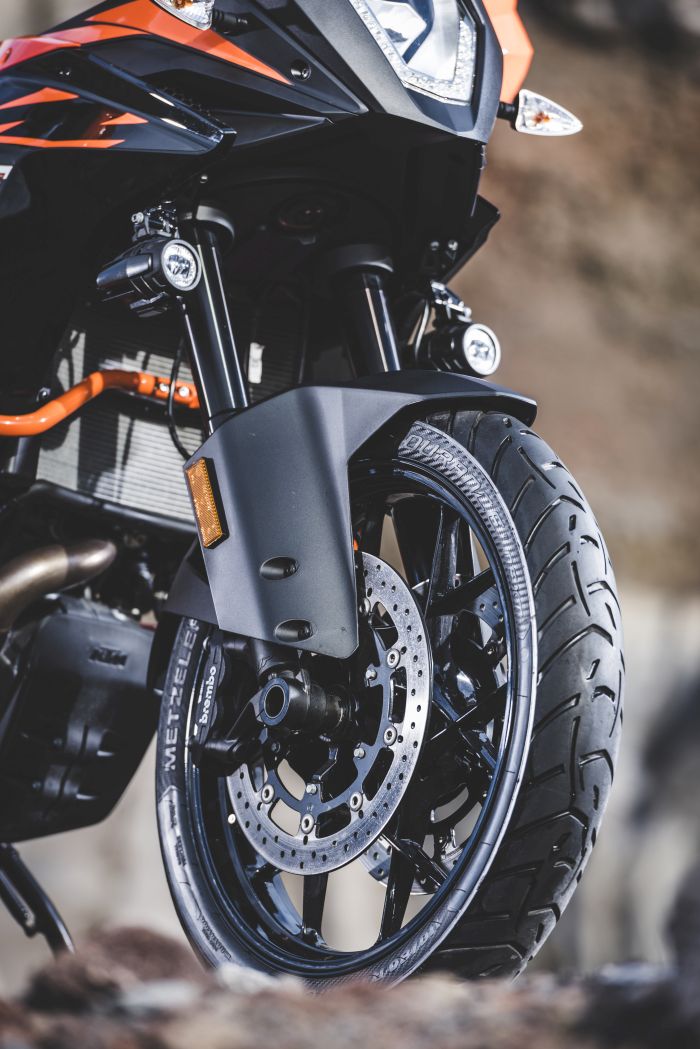 For this issue, I’m sticking with the 1090, which is essentially the old 1050 with an additional 30bhp boosting output to 130bhp and a modest increase in torque up to 80.4ft-lb. The new bike comes with a change of graphics (the stockings and curlers have been ditched), it’s Euro 4 compliant, there’s a new adjustable screen and a few other tweaks here and there, such as new cams. What’s not changed is the 1050cc capacity of the bike, the reference to 1090 is purely a name change rather than a cc upgrade.

Rather than simplifying matters KTM is also making a 95bhp version of the 1090 which can be restricted to 47bhp for A2 licence holders, but then cannot be de-restricted to the full 130bhp. Still with me? The company is also sticking with the line that the 1090 is an entry-level adventure bike. But make no mistake here, 125bhp of Austrian metal is not what I’d call entry-level in anything other than it’s less expensive than a 1290. The 1090 is a fully grown-up machine and just as capable as any other 1000cc adventure bike on the market.

Corsica is a fantastic location to launch a motorcycle, though the island’s February weather patterns can be unpredictable with t-shirt coastal climates immediately followed by cold and wet foothills and 20ft snowdrifts up in the highlands. Being only 114 miles long and 52 miles wide the island has been described as a mountain in the Mediterranean and that’s just about what it is with the highest summit topping out at 2,706 metres (for comparison, Ben Nevis, the highest in the UK is 1,345 metres) and another 120 peaks of more than 2,000 metres.

Our ride was to be in the foothills to the south and east of the capital Ajaccio which would never take us as high as the snowline, but the weather and topography was such that we’d be in sunshine in one valley and a severe storm in the next. And all the while there’d be the magnificent Corsican roads, think Alpine tarmac, to contend with. A great testing ground. 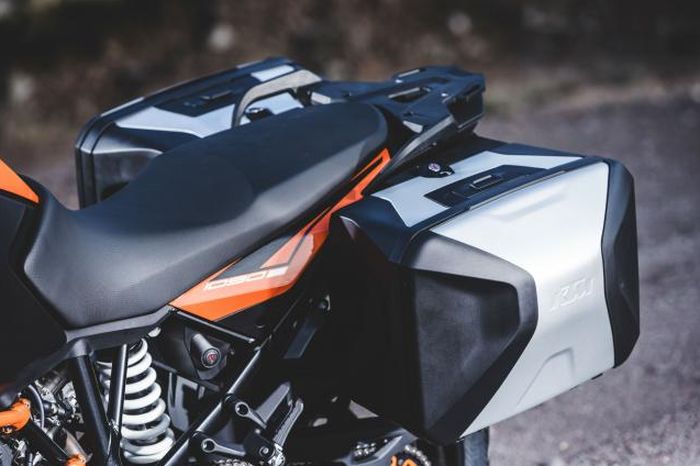 Having ridden the magnificent 1290 during the morning, the afternoon was to be spent on the new 1090 Adventure. The first thing that springs to mind is that you’d be hard pushed to spot the subtle differences between the older 1050 and the new bike at anything more than a few paces away. Step aboard and it’s all pretty familiar, with the old style split dash configuration up front.

The riding stance is as it was; a hands, feet and backside triangle offering a spot on upright riding position and, at 6ft 2in, I could plant both feet comfortably on the floor for stable manoeuvrability. As is now my way at these events, I also seek out the shortest of the group and make a point of visually checking and then asking how they find the seat Hight. A 5ft 7in tester appeared at ease with the fact that whilst they could not get both feet flat on the ground, they could at least get both balls of the feet in contact with terra firms.

I’d found the screen on the old 1050 to offer good enough protection and that was the case with the new adjustable screen on the new 1090. All things considered, the saddle of a 1090 is a pretty comfortable place and position to be setting off on a tour.

And setting off is where the difference in the old and new is to be found. The extra bhp is instantly noticeable and, in my opinion, makes the bike a better experience from the off. It feels more lively and faster, though with only a slight increase in torque there’s still as much gear changing to be done when out on Alpine style roads or when looking for a fast overtake. 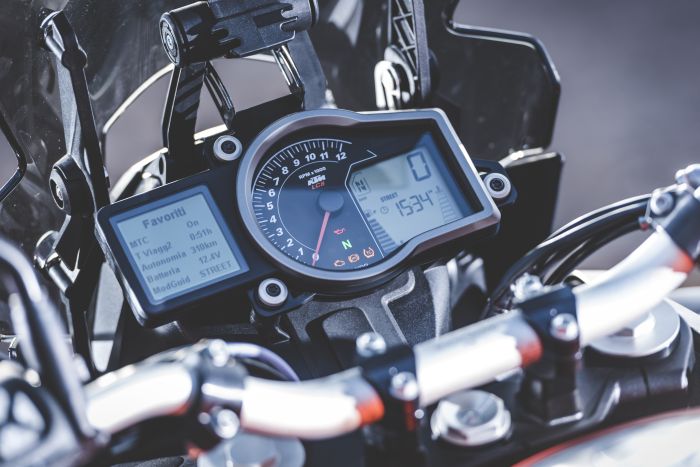 The 1090 comes with ABS and Traction Control which are always handy in changeable conditions on greasy roads, plus you get Rain, Street and Sport riding modes as standard – an optional Off-road map is also available.

During the test ride, most of the time was spent in ‘Sport’ quickly followed by ‘Rain’ and the difference in power output and traction control is both noticeable and welcome. The afternoon route was more varied than the constant and consistent serpentine nature of the tarmac during the morning run out. In fact, to highlight just how many bends we’d taken before lunch a few riders were complaining of near seasickness at the changeover.

By contrast in the afternoon, I was able to test out the 1090 on fast dual carriageways with long sweeping bends and more leisurely straights where I could sit at legal speeds checking out the comfort and performance. In all conditions, the 1090 was performing at a level where I’d have been happy if I’d have bought one.

Without doubt, the most testing section of the afternoon ride was a narrow, wet and broken single track mountain road with huge drops offs to the side. The sort of road where an auto-deploy parachute would have been just as useful a feature as the superb slipper clutch fitted to the 1090, which eliminates back wheel bunny hopping on overly aggressive downshifts.

Taking this road on at pace was an experience of total concentration and good judgement and also the most thrilling ride I’ve undertaken for a while. It was also a superb test for the quick handling ability of the bike and the excellent WP suspension. In conditions which were, quite frankly, pretty gnarly with no margin for error the best recommendation I can give as to the 1090’s ability is that I’m sitting here writing this feature. Fantastic fun, excellent performance and precision handling, that’s all that needs to be said.

I came away from the 1090 Adventure test with the firm belief that at £11,299 this bike is no ‘entry level’ machine, but one that will compete with any other comparative bike on the market. It would make a fine all-round adventure touring bike and even with its cast wheels (19in front/17in rear) would be more than capable of delivering on the off-roading aspirations of most buyers. 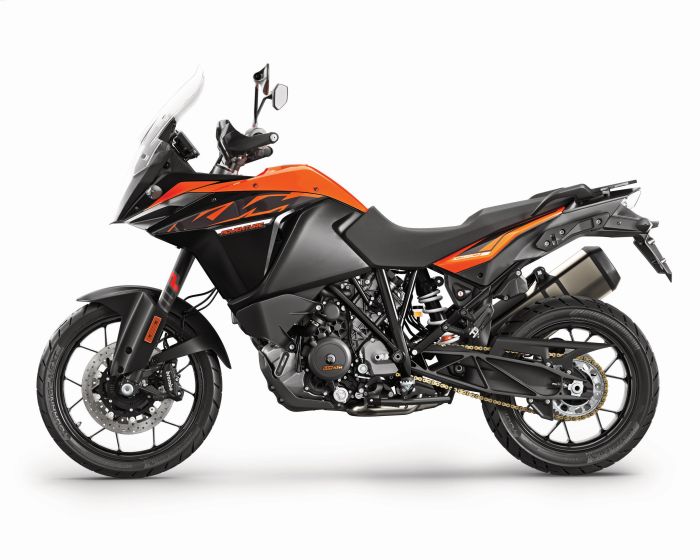 As a commuter
Comfortable and commanding high stance for visibility plus it’s reasonably slim, agile and you get plenty of power which all makes the 1090 a spot on commuter in my book. The seat height might not suit some.

As a weekend tourer
Just one look at the 1090 has me thinking ‘hurry up Friday’. Spot on for a quick Friday evening blast to Mid Wales or The Lakes and the characteristics to make the most of our best riding roads when there.

As an off-roader
If you’re after an off-roader, then check out the ‘R’ version of the 1090 which comes with 21in front and 18in back spoked wheels. As it stands, the standard Adventure will cope with the odd, mild off-tarmac flurry with no problems.

As a continental tourer
Bags of power and comfort for long-distance motorway munching and sporty enough to have great fun on Alpine twisties should you decide to hit the hills. Don’t underestimate this bikes touring ability.

As an RTW traveller

Riders travel the world on everything from mopeds to Harley cruisers, so the 1090 is more than capable depending on your chosen route – mind you I’d not fancy the endless quagmires of the Congo on anything as heavy.

As a pillion carrier
Not had the chance to check out the opinions of the perfumed half of the lounge, but if it’s anything like the old 1050 or 1190 (and it is) there’ll be no complaints.

The Off-Road Pack
The 1090 Adventure is the more street sorted version with the ‘R’ being the off-roader of choice. However, if you fancy cutting loose down forestry lanes on the standard Adventure you may want to go for the optional ‘Off-Road’ software pack which includes: 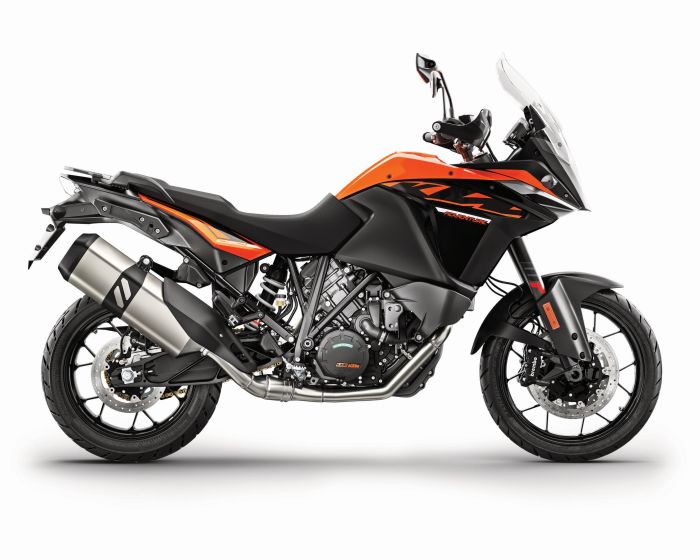