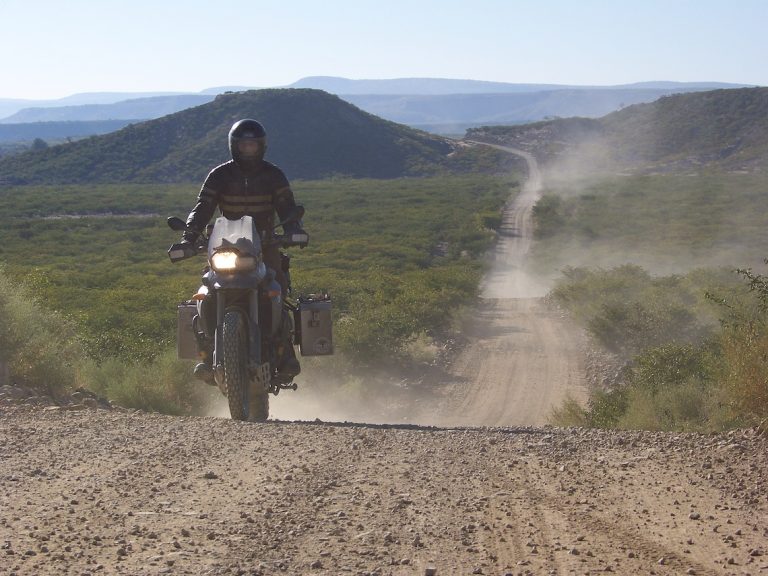 Michael Steyn and pals are off on a three-week bush-bashing trip through their own backyard in Southern Africa, en route to Doro’s Crater, Namibia

It was a bitter cold Saturday morning when a bunch of us ABRs met at Beestekraal for the long-awaited trip into Botswana and further north. June 2010, just as the maddening crowds were really getting into the swing of the World Cup with vuvuzelas roaring, we hastened toward Thabazimbi and our first night’s camp out in the Tuli Block at Camp Molema. We met a couple on an 800 GS in Ellis Ras and they were soon part of the group for the first two days of this 21-day trip.

The next day, we traversed the Tuli in search of wild elephant and game. The riding was excellent, but only on our way back to camp that afternoon did we finally spot a big tusker – a relief for me as I’d told everyone that you always see elephant in the Tuli. The Motloutse River Bed provided some good laughs; the track was very churned up and more of a challenge than usual. Even JJ, who has sped through it in the past, had to take a break about halfway.

We arrived in Makgadikgadi Pans by late afternoon the following day. We couldn’t reach our chosen destination of Kubu Island, however, as the darkness rushed in to meet us. Camping in the open was our only option to avoid having to ride on in the dark, something that can be quite challenging and unnerving in Africa and best not attempted at all if you can help it.

After a good breakfast we rode via Kubu to Gweta. From previous experience we decided not to do the ride from Kubu via Chapmans Baobab to Gweta because of the very thick sand we’d encountered on this route. Instead, we decided to go via Kauxae Village. This looked an easy alternative route when doing our pre-trip Googling, but it turned out to be even worse! Not only was the sand deep here too, but the track was also lined with stubborn Mopani trees and thorns that kept grabbing at handle bars and pannier luggage. I ‘m pretty sure that every one of us had a dusty encounter with terra-not-so-firma on this leg; my fall was spectacular but unfortunately there was no one to witness it. 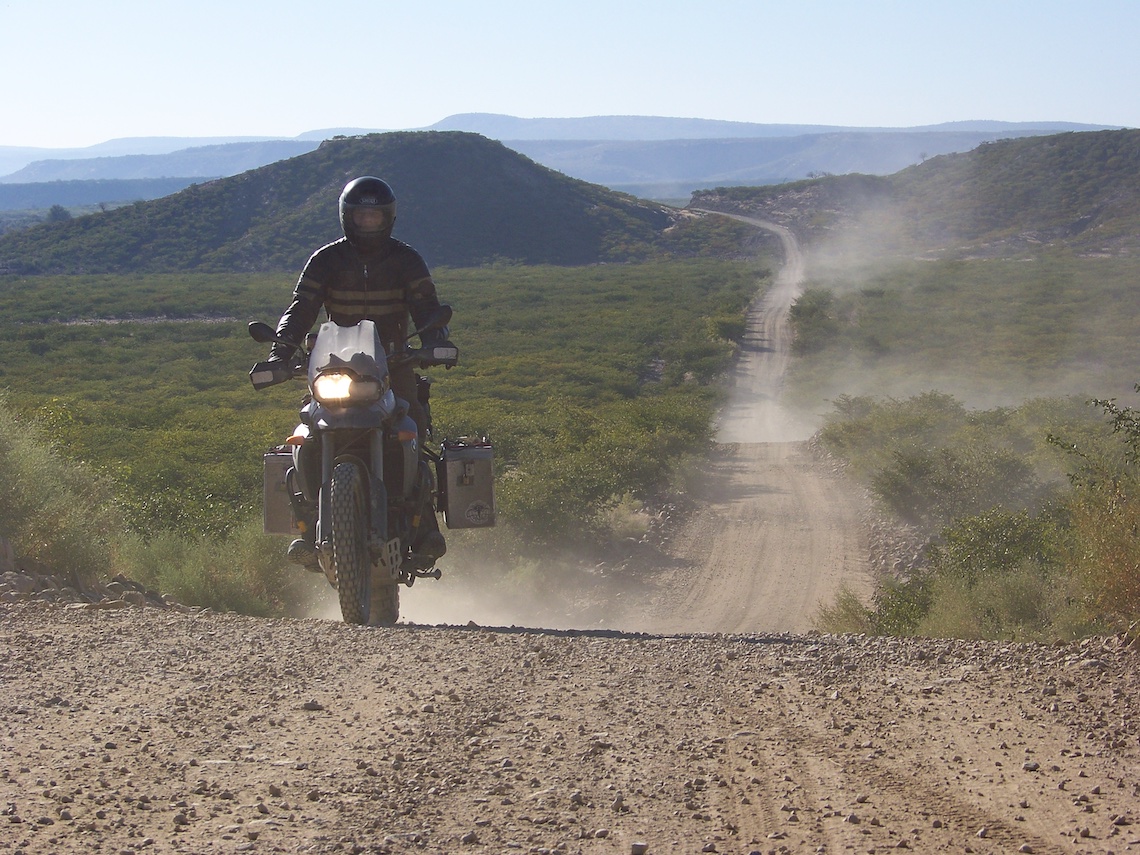 After a very hard day’s riding we arrived and camped at Gweta Lodge. Two dusty days without facilities meant that the evening meal and hot showers were both enjoyed and appreciated. Day five saw us riding tar all the way to Maun where we settled into our camping spot at the water’s edge after enjoying some cold ones at a nearby restaurant. This was the start of something I have wanted to do for a couple of years now; the Okavango Delta.

The following day’s ride was almost all tar on the western side of the Delta but it also proved to be one of the highlights of the trip with massive water crossings. We aimed for Guma Lagoon Camp but the waters proved to be too deep and we decided to try Sepopa Camp instead, situated about 30 miles further north. We crossed Sepopa without too much difficulty and settled ourselves in for two days off the bikes, which we spent enjoying some leisure time, going on a boat cruise over the swamps and waiting for Cyril, who was lagging behind.

Due to an all-too familiar misunderstanding, Cyril had headed for Guma Lagoon and, believing that we’d all made it through, plunged into the flood plain, duly submerging his KLR. Fortunately he’d managed to get a text message through to us, pinpointing his place of demise, and Hein’s back up vehicle was soon on its way to recover our friend with his drenched motorcycle and gear.

The next morning there were enough mechanics to get the KLR dried out, but the battery was totally flat. On tow behind our kitchen trailer, we dragged Cyril and his sorry KLR for about a mile until the bike spluttered, coughed and roared back into life. We then headed for Rundu, crossed the border from Botswana into Namibia without too much ado, and headed to our camp, Nkwazi, on the banks of the Okavango overlooking Angola. 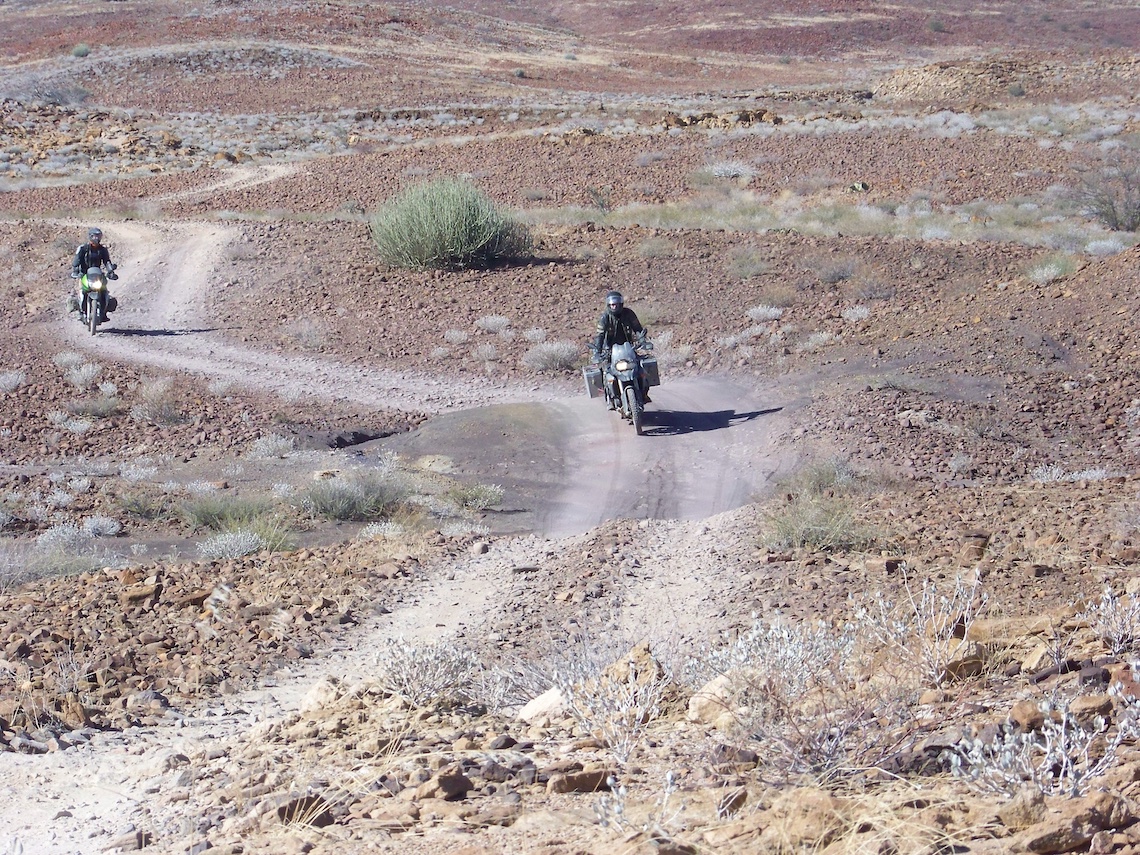 After a good night’s rest we rode toward Ruacana and Hippo Pools campsite, this after repairing two punctures on the same bike, a first for me. The front tyre had a thorn stuck in it and the rear a popped rivet. That evening we enjoyed a night under the stars on the banks of the Kunene River, still overlooking Angola. This was a really beautiful campsite with alluring, cool waters. I assured everyone that if we took a really quick swim, the crocodiles wouldn’t clock us; the only two blokes who were brain-fried enough to believe me were Cyril and Remo, who promptly leaped in with me for a quick in-and-out splash in the refreshing waters. No crocodile in his right mind would have jumped into that freezing water for a mere morsel of a meal like us!

We spent the next couple of nights at Epupa Falls, an oasis to rival all others. Here we ate, drank, and made merry. We also treated ourselves to some clean clothes courtesy of two local entrepreneurs, who washed our long-overdue clobber at a princely sum.

We filled up at Okangwati using fuel out of drums and buckets that cost 11 rand (80p) a litre, but we had little choice as it was the only fuel available before Opuwu, over 100 miles away. We then rode on to Warmquella, where we spent the night. We could now feel that we were moving south again; the night air had a chill in it that we’d last felt at Maun. Most of us had packed summer sleeping equipment and had been forced to buy blankets at warehouse stores as we’d travelled, slits cut in some for makeshift ponchos, which were seen every morning around the fires as coffee and rusks were enjoyed.

From Warmquella we travelled via Twyfelfontein toward Uis, but took a detour past Burnt Mountain and on through Doro’s Crater, which lies just north of the Brandberg. This was the highlight of the trip for me. We rode until dusk and then set up camp on some level ground for the evening. 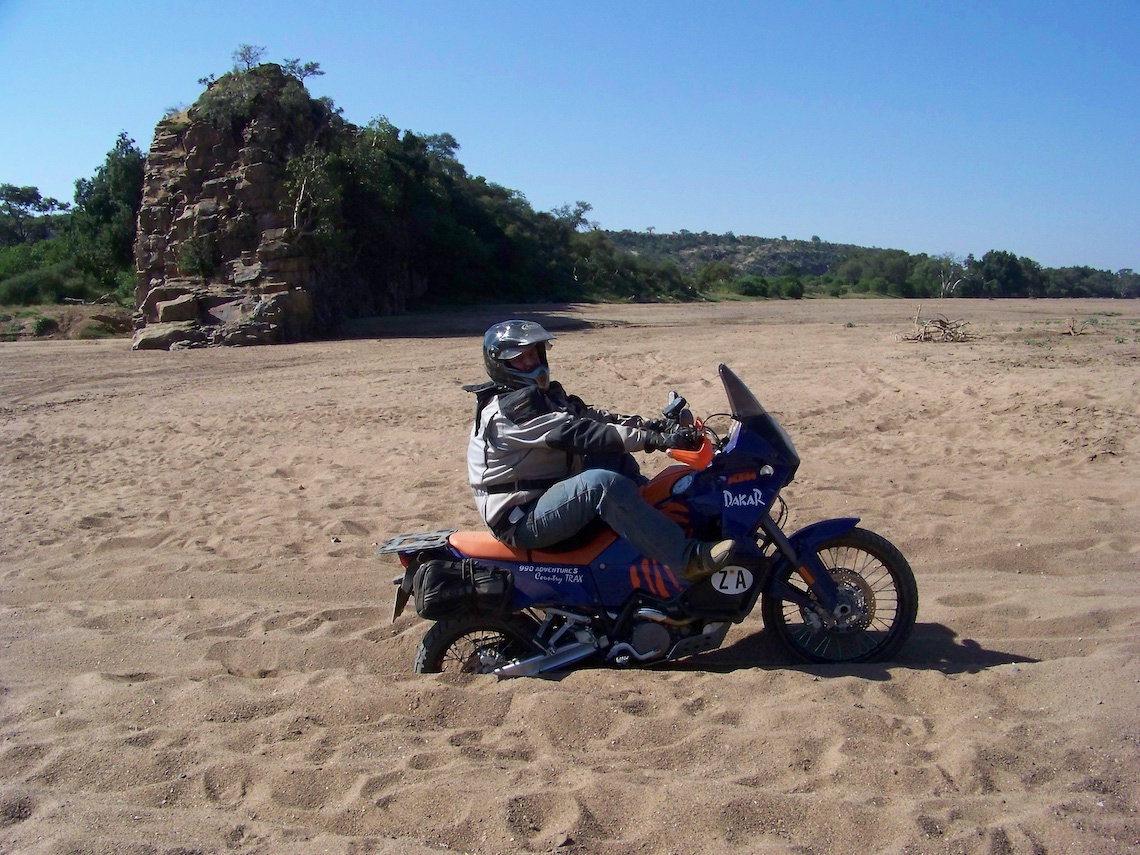 The next section of our trip had to be undertaken in stages as the two-spoor track of 50 miles took us about 18 hours to complete. There was lots of dry riverbed riding to negotiate and thick, loose river sand, rocks, slopes and inclines. There were a few pools of water here and there, but after a not-so-refreshing mouthful from one of them, I discovered these were saline. I guess the white crys- tals beside the pools should have given someone with a brain an indication.

With a salty taste in my mouth, we continued on to Uis where we met Basil, the owner of the lodge where we planned to camp. Basil took us on a sunset cruise to a nearby tin-mine dump. The dump is made up of little granite beads, which is fine with a 4×4 and a V8 motor but with two wheels and a 40-degree incline the bikes just couldn’t get enough traction. We tried, but eventually we had to take the chicken run out, which I am glad to say even some of the folks in their 4x4s did.

The next few days were spent at Swakopmund. We stopped over at Henties Bay for a cold drink where a freezing off-shore wind blew along the beach. In Swakopmund, the footie was on the TV in all the local pubs and all the bars in Swakop were alive with football fever. Here we met up with some riding buddies who were on their way back from a ride through Angola. We also met four other ABRs, some of whom had been travelling for 11 months through Africa – and we thought we were adventurous!

Leaving Swakopmund, we travelled via the Khomas Hochland route and up Boshua Pass toward Windhoek. This stretch was another high point of the trip. The road up Boshua Pass has a warning that only 4×4’s should attempt it, but the bikes and our backup vehicle managed just fine. We made camp in Windhoek and once again the footie fans among us headed for the local drinking spots to watch the game. There seemed to be lot of foreign visitors in Namibia that summer, particularly of the fairer sex, and I’m of the opinion that these visitors also added to the allure of a busy, warm pub and the 2010 FIFA World Cup. 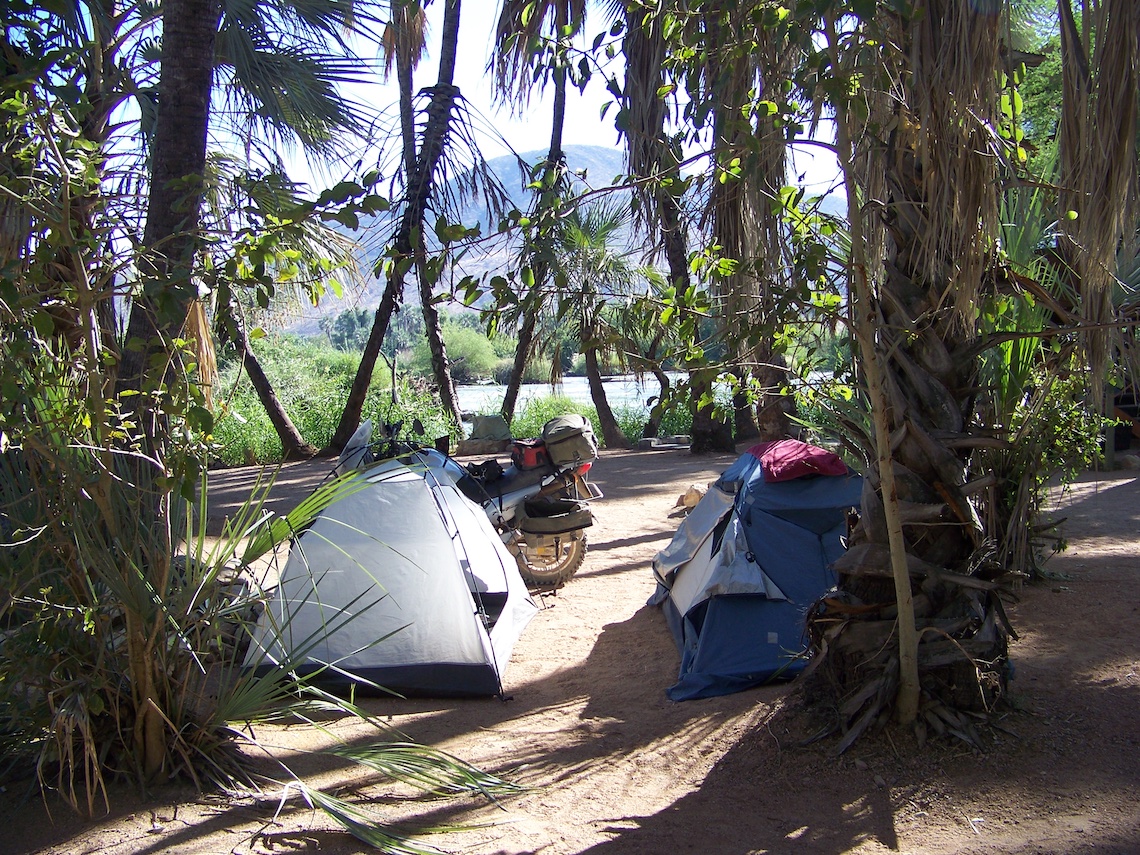 The following day we crossed the border back into Botswana at Buitepos Border Post. From there we travelled until it got late, eventually turning off into a village where we found a camping spot at a local police-station-cum-governmental-building. We visited a local Shebeen (bar) before getting an early night’s rest for the last two legs of our journey home. At the halfway marker, we treated ourselves with fancy lodge accommodation, white sheets and restaurant meals accompanied by many a cool, frothy ale around the bar before laying in a hot soaking bath tub for hours on end. The last day of our trip had arrived, with some of us looking forward to going home and others looking for sponsors to keep us travelling until the big end draws nigh. Everyone returned home safely with a trip of 3,730 miles under the belt and more to come. Hope to see you all in the dust some time again, sooner rather than later.