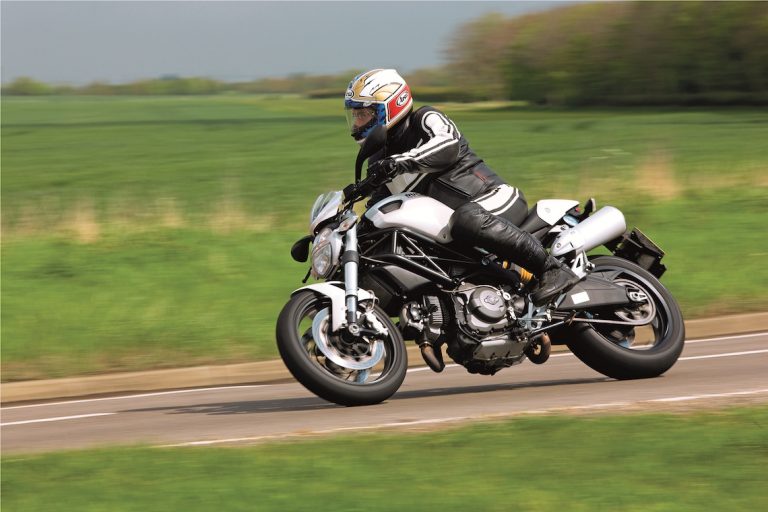 Exploring the best bits of tarmac Scotland has to offer

Stirling’s one of Scotland’s treasures – an attractive old-stone town crowned with a gem of a castle. It’s also the gateway to some fabulous riding – which locals know, especially riders from the nearby cities of Edinburgh and Glasgow. Some popular biking roads get busy at weekends, so these routes may be better enjoyed on quiet weekdays. This loop heads north to join the epic A85 along the shores of Loch Earn, before heading through the Queen Elizabeth Forest Park to the heart of the Trossachs. Climbing the spectacular Duke’s Pass, we skirt the Lake of Menteith before diving down quieter roads to the Carron Valley and returning to Stirling. 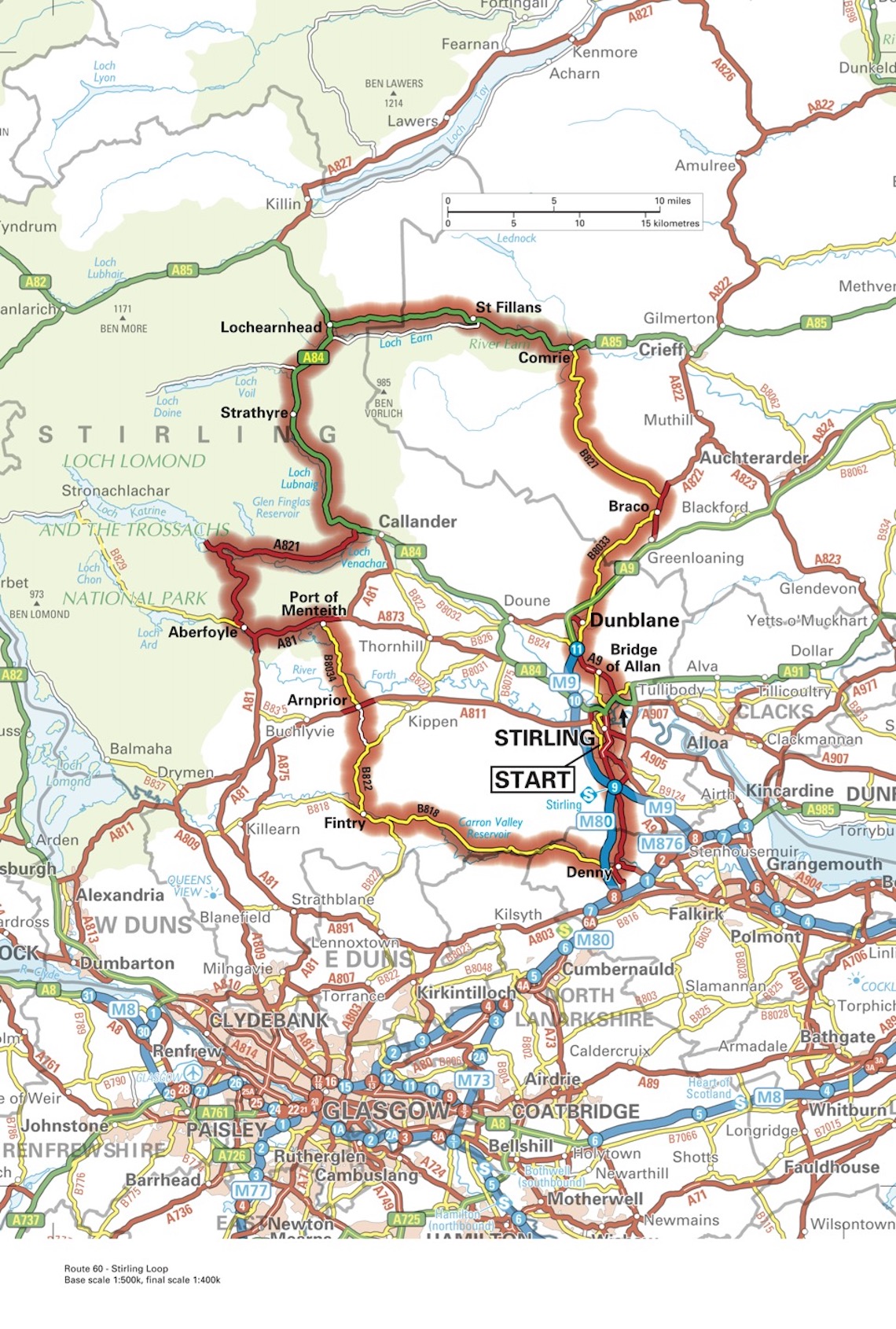 Stirling Castle One of Scotland’s best-preserved castles and one of the most rewarding to visit, with plenty to occupy all ages. www.stirlingcastle.gov.uk

SS Sir Walter Scott Swap the bike for a boat and enjoy the peace of Loch Katrine, in the heart of the Trossachs. www.lockhatrine.com 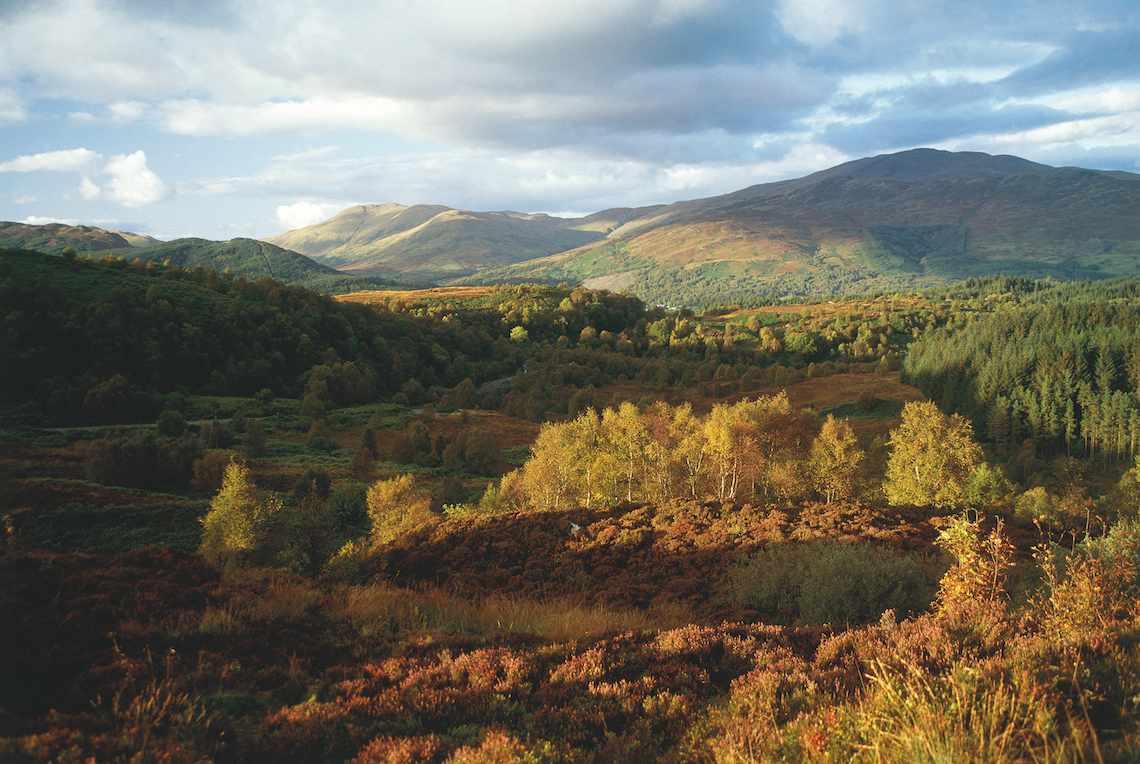 Ride 2: Inveraray to Campbeltown (A83)

Forget the Highlands. Yes, they’re great – but everyone goes there. If you’re fed up with fighting German- plated GSs for space on the Mallaig ferry to Skye, try heading south along the Kintyre Peninsula. It’s every bit as beautiful as the rest of Scotland’s West Coast – and even quieter. The road heads south from Inverary along the shores of Loch Fyne, one minute hugging the strand, the next climbing to offer views atop larch forests, then descending until it’s next to the water again. At Tarbert, it crosses the peninsula, with magnificent views out across the sea. If you’re feeling really adventurous, consider a ferry from Tarbert to the whisky Mecca of Islay… Campbeltown itself is a charmingly sleepy town and it’s not quite the end of the road – there’s a narrow but satisfying ride down to Southend at the tip of the peninsula. Riding north again, you could retrace your steps on the A83 or take the beautiful B842 along the eastern shore, with views out across the Mull of Kintyre. Just don’t blame us if you keep humming that Paul McCartney song… 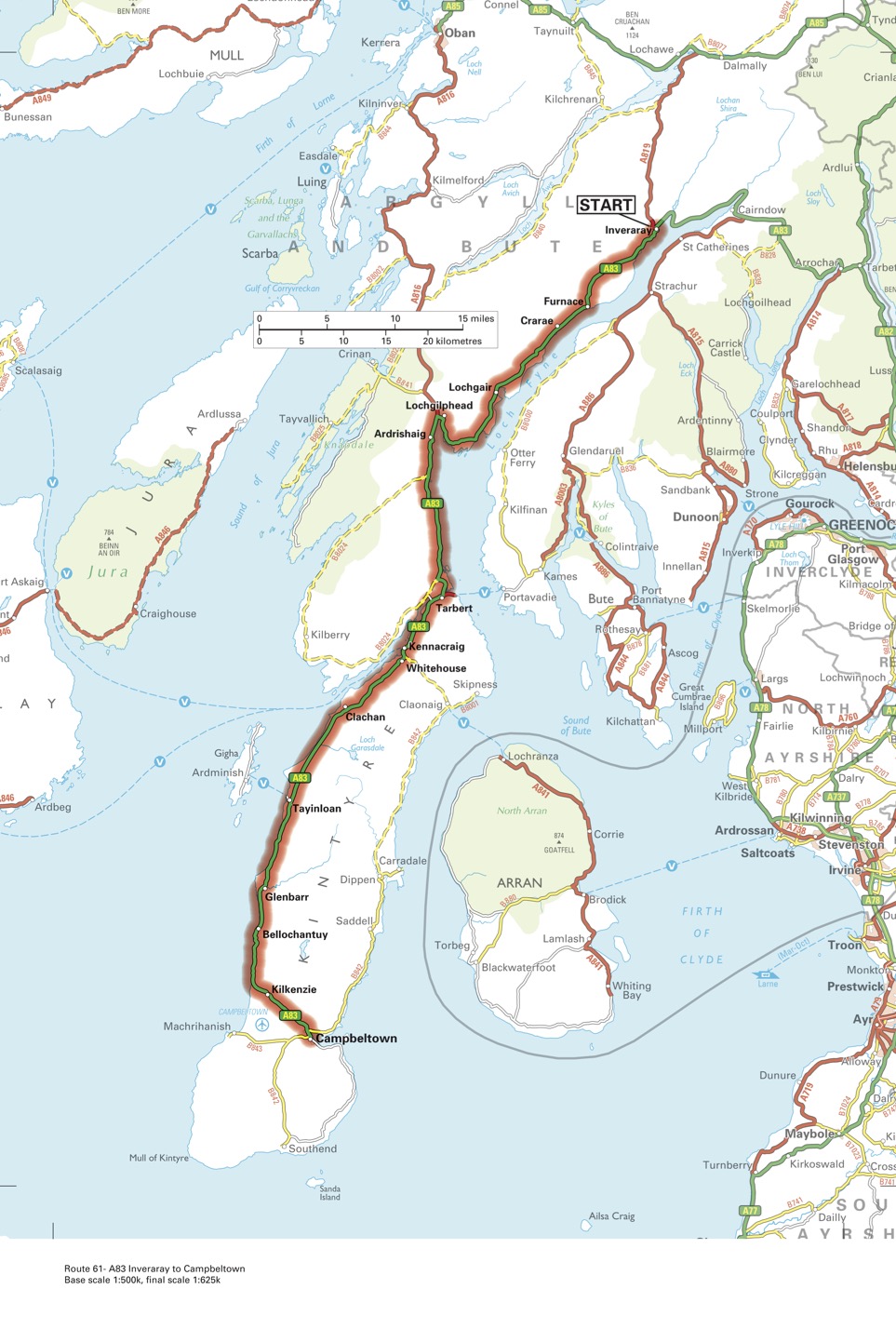 Inveraray Jail This 19th-century jail is complete with courtroom, exhibitions on prison conditions of the past, and a fully preserved ‘Black Maria’ built in 1891. www.inverarayjail.co.uk

The ‘Wee’ Picture House, Campbeltown Opened in 1913, this classic art deco cinema is one of the oldest surviving purpose-built cinemas in the world. www.weepictures.co.uk

Westport Beach Between Westport and Machrihanish, around six miles of sandy beach, backed by dunes and golf courses. Ideal for walking and getting some of that bracing sea air.

Heading north from Glasgow, it’s only natural to take the A82, round Loch Lomond, across Rannoch Moor, through Glen Coe. This is wild Scotland at its most beautiful – right? Wrong. Wait until you get to Skye. It’s magical. Of course, the A87 is fabulous, but taking the ferry is even better. It slows the journey, brings it home to you that this is real travel, almost an adventure. It helps that the A830 from Fort William to Mallaig, where you catch the Skye Ferry, is an amazing road as well…But real magic happens on Skye. There’s an untamed quality to the towering Cullin Hills; a sense that you’ve stumbled into the land that time forgot. Pause beside a rocky inlet and it’s easy to picture Viking raiders landing in a longboat, or mammoths stalking the high slopes of the hills. The roads on Skye are involving and a lap of the island can – just about – be done in a day from Fort William, though it’s easier if the return leg is over the Skye Bridge to Lochalsh. But this is an island to savour, not to rush. Far better to find a bed in Uig or Dunvegan, explore Skye slowly, lose yourself in the landscape and fall under its spell. 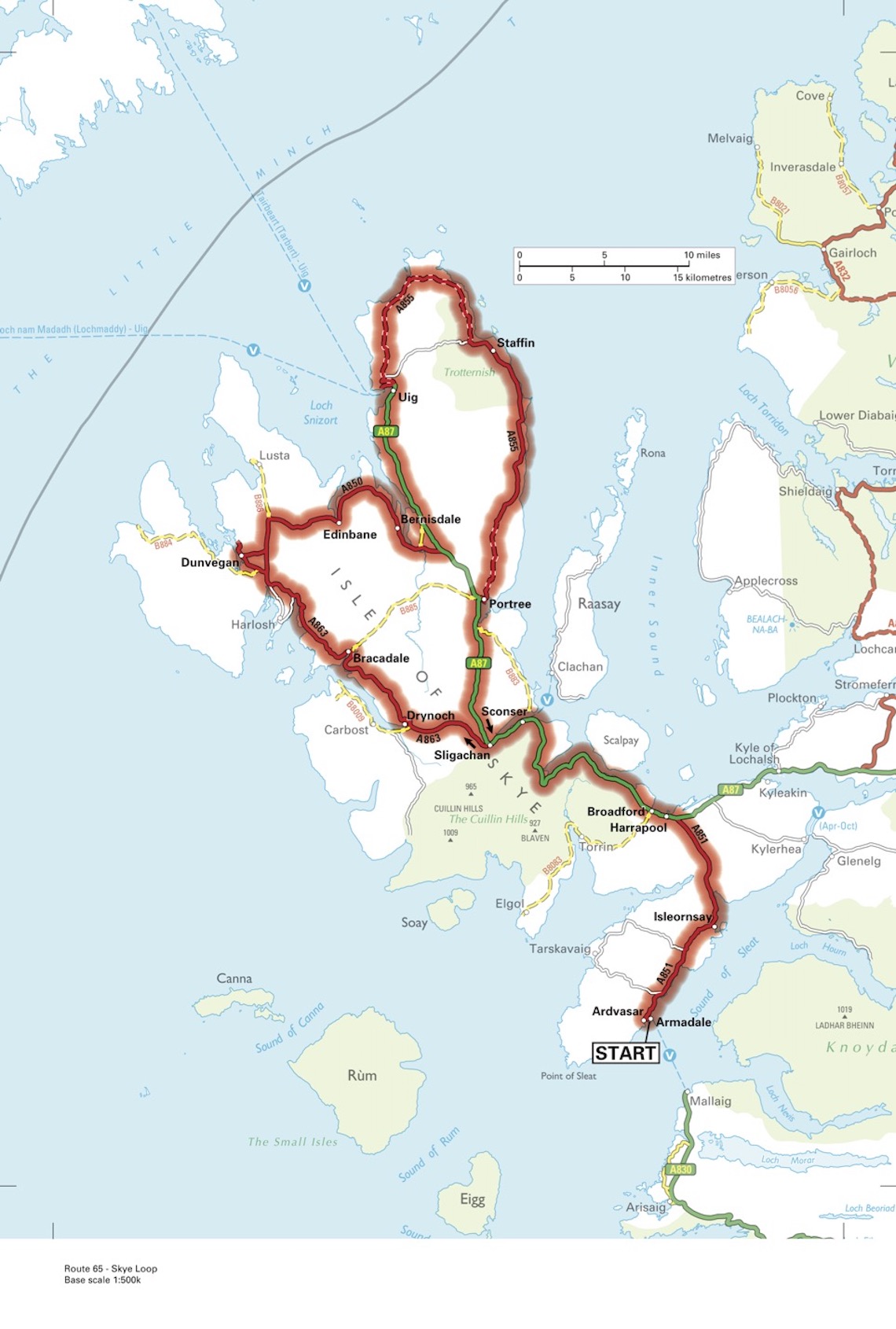 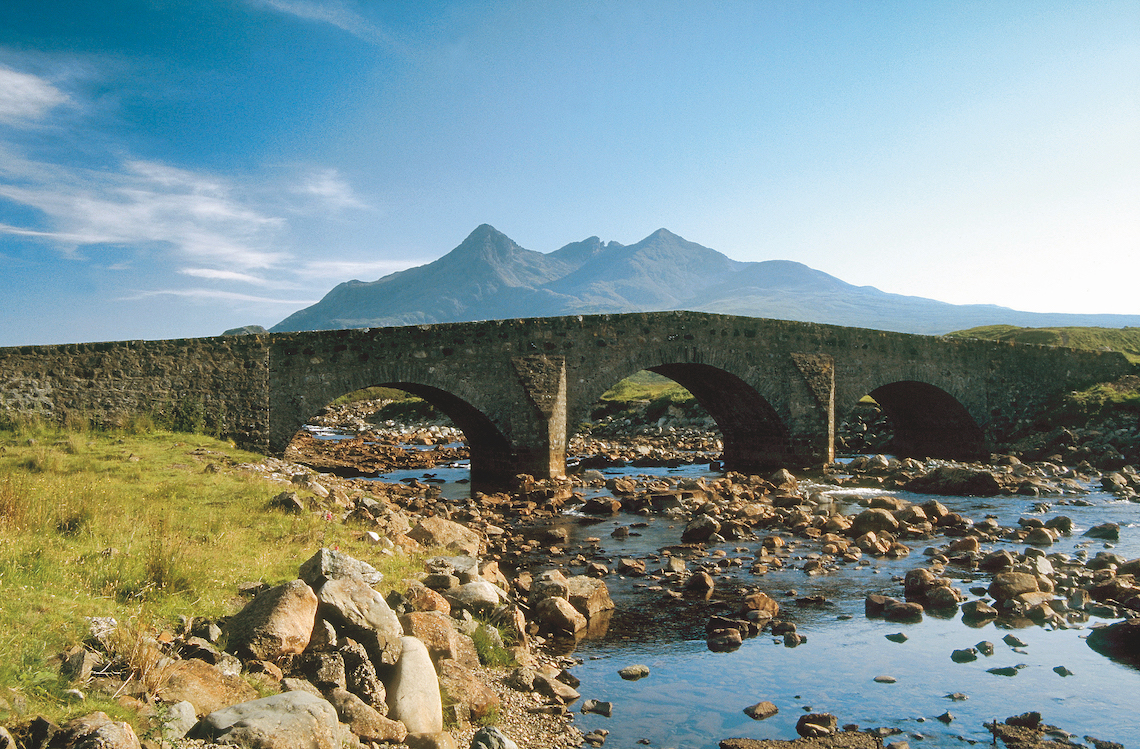 Uig Hotel Easy to find, with a good restaurant and a decent rear car park to keep the bike out of sight of the road. www.uighotel.com

Skye Ferry Book in advance. Groups should confirm the port the day before departure, to ensure space is kept on the ferry. www.calmac.co.uk

If you jump on the A9 at Dunblane, spilling off the M9 motorway, you’ll be fairly sick of it by the time you reach Inverness. Dual carriageway as far as Perth, reasonably busy – and saddled with a posted and fairly well policed speed limit – as it slips through the Cairngorms, it ranges from dull to disappointing. Hardly the ‘classic’ riding you’d come to Scotland to sample. But bear with it. Traffic melts away as you cross the Murray and Dornoch firths. Then from Golspie, the road is a delight. With the North Sea shimmering away to your right, the road gets better with every passing mile. By the time you reach the Alpine curves north of Helms- dale, any resentment at the lower-reaches of the A9 is forgotten: after all, you only get to ride this captivating stretch of road because the earlier sections got you here. Cutting inland at Latheron, the road rises and changes character slightly. It’s a fast road, slicing across moors, past forest stands and windfarms. By the time you get to Thurso, you’ll have a broad grin and a fondness for the A9. And the best bit? To get home, chances are you’ll ride this road again – and you’ll be looking forward to it. 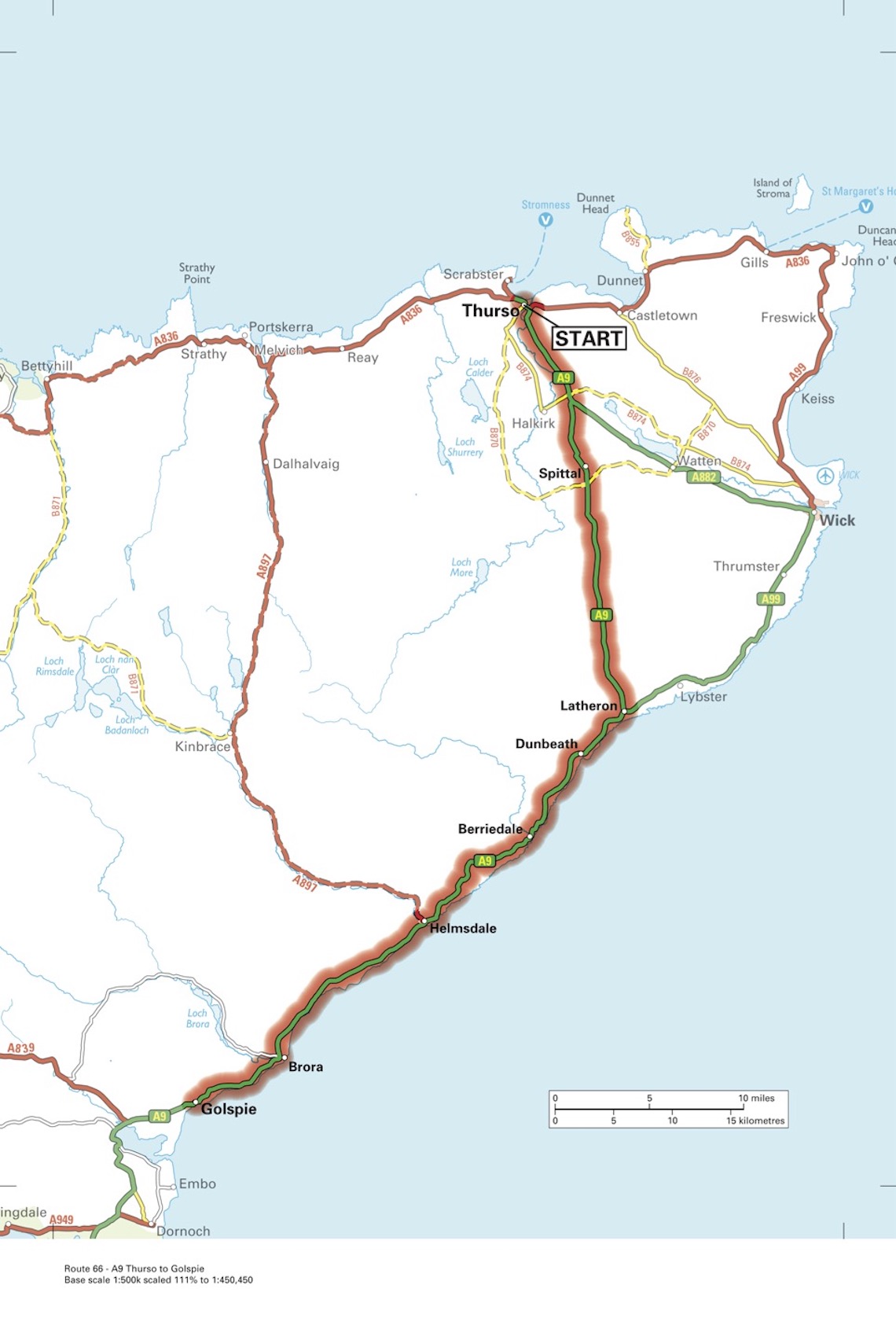 Castle of Old Wick A ruined Norse castle dating from the 12th century. Set on a spine of rock projecting into the sea between two deep, narrow gullies. Not much left, but still amazing.

The Castle and Gardens of Mey, Thurso 16th-century castle bought by The Queen Mother in 1952. She restored the castle and created the beautiful gardens. www.castleofmey.org.uk 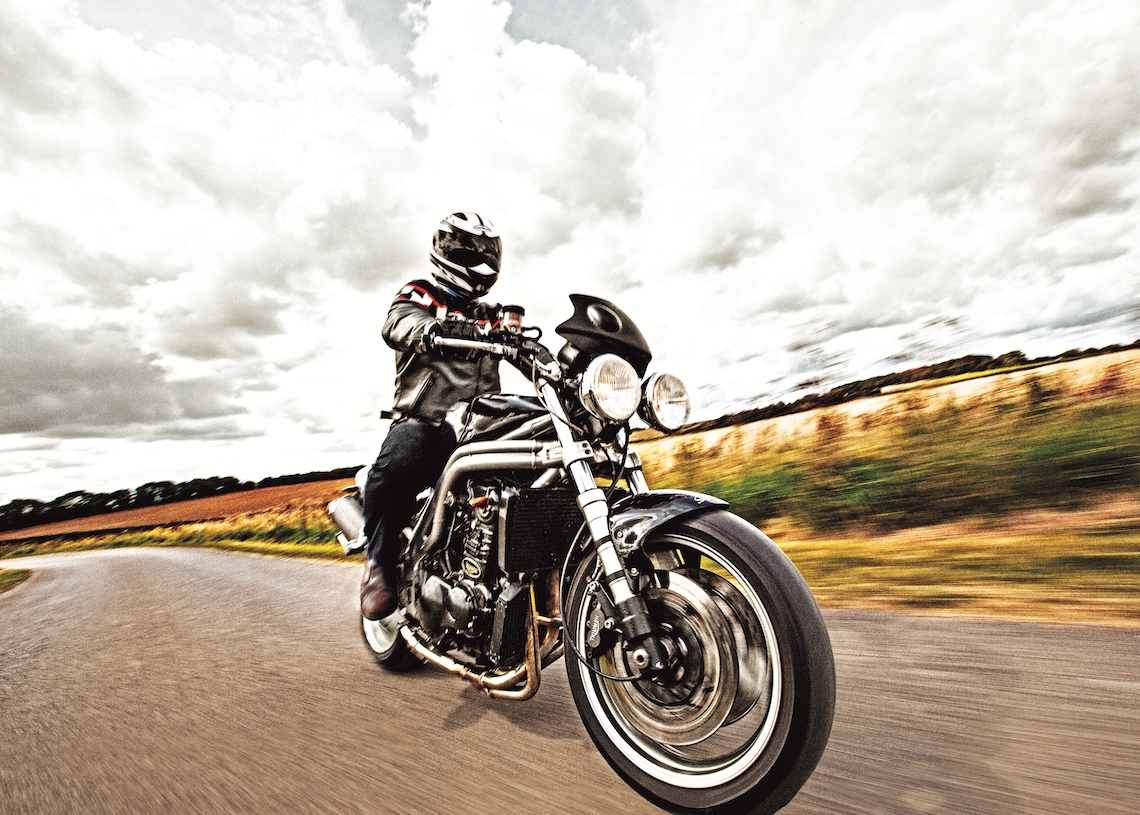 Chased from the Highlands by black clouds and snow, I’m determined to cram in one last great ride before I leave Scotland. East then south from Glasgow, heading for Berwick-upon-Tweed, I know there’s a fabulous and secret ride: the B6355 past Whiteadder Reservoir.

This is my kind of road: quiet, rural, decent surface, wide-open views, plenty of elevation changes and the kind of sneaky bends that demand respect and concentration. It’s quite simply brilliant and, past the hamlet of Gifford, utterly deserted. I see one car though it is literally driven by a vicar, at the kind of pace you’d imagine – no matter, passing here is easy. There are sheep on the moor top, watching the gs with cud-chewing indifference, but I can pick the pace up past the waterworks and on towards cranshaws. The ride’s so good I’m tempted to turn round and do it again…but the storm front is close behind me. I keep going – but I want to return. Soon. 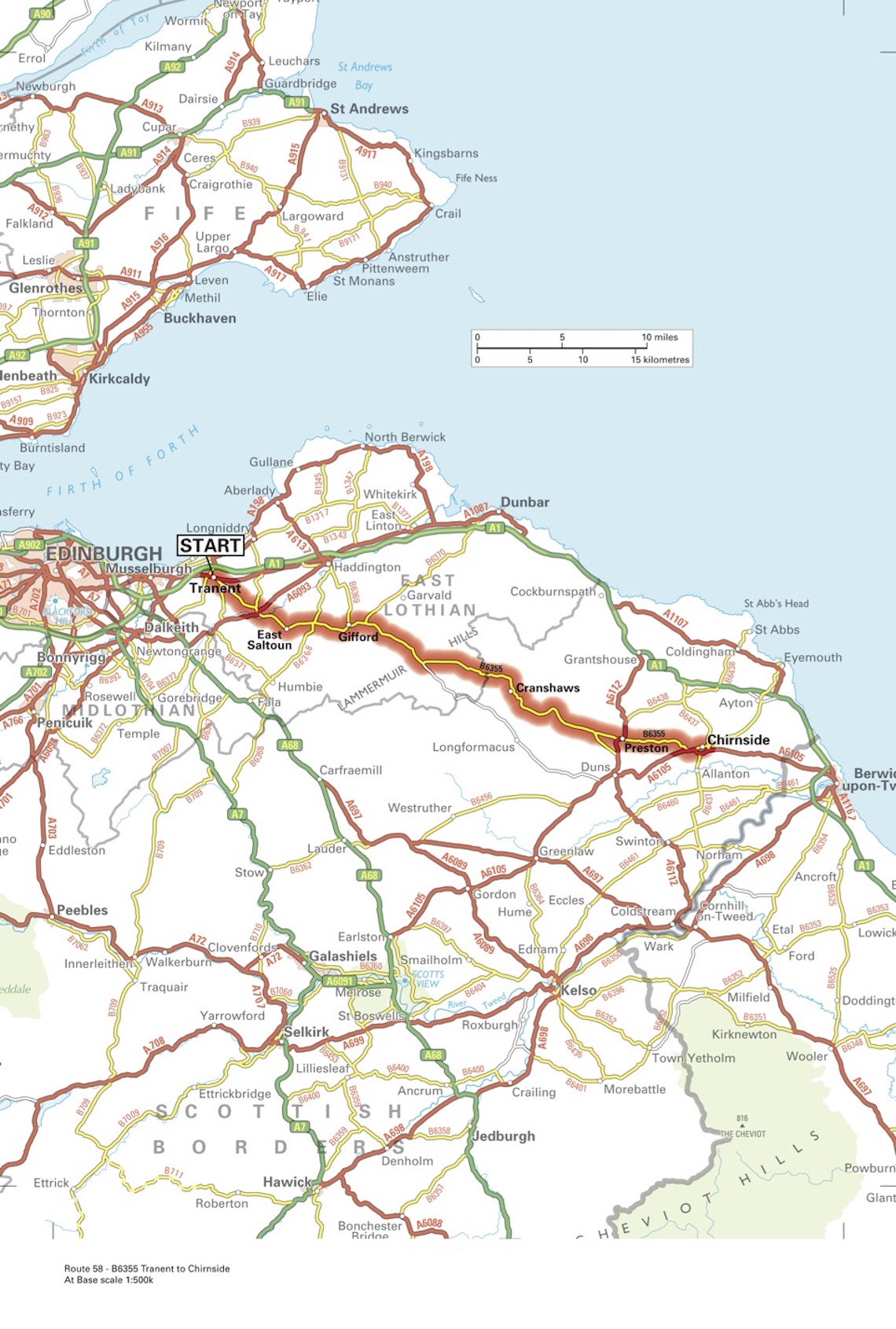 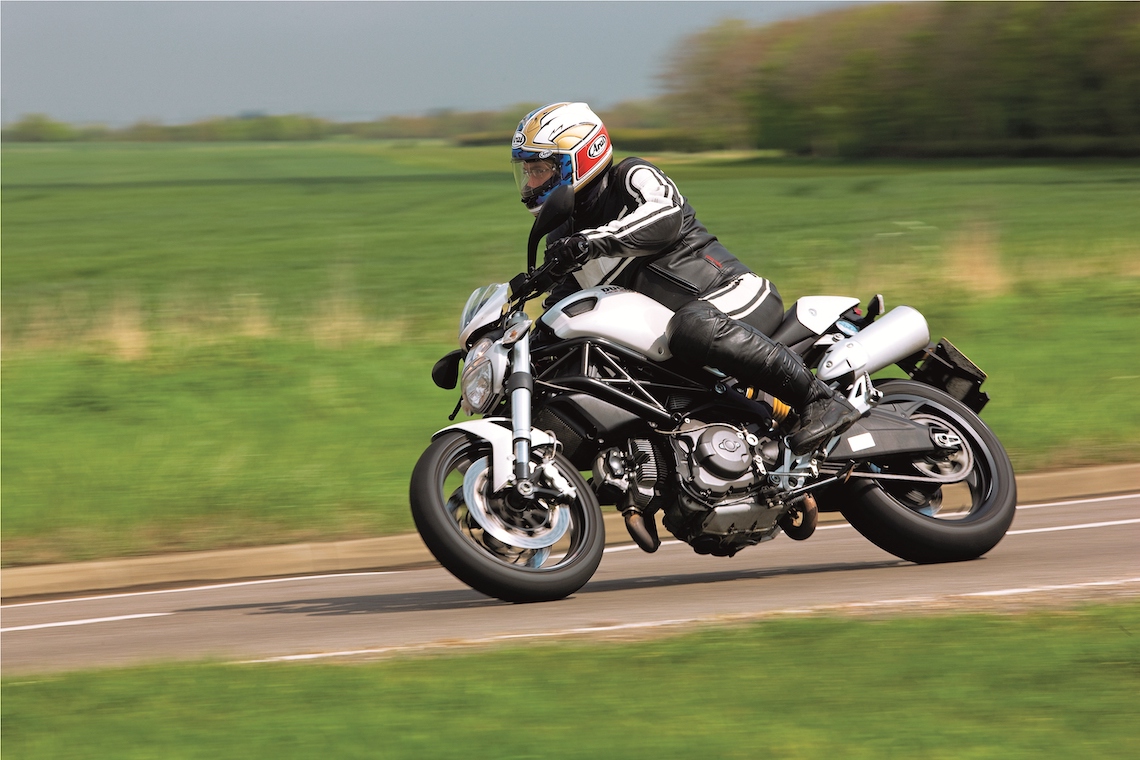