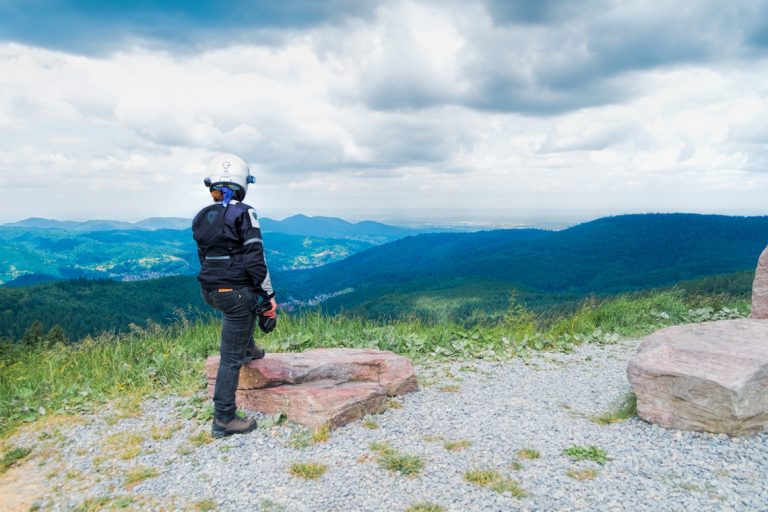 When you’re heading over to the Alps for your summer tour, it’s often all too tempting to hop straight on the motorway and blast over to eastern France as quickly as possible. It’s something I’ve done on many occasions, but when doing this it doesn’t really feel like I’m on my tour until I finally get to the mountains, and that day-long motorway ride is a real kick in the balls.

So, how about making a bit more of your ride to the Alps? It’s not a revolutionary idea, but by planning your route to include fun riding from the minute your tyres touch tarmac in mainland Europe, you’ll be on to a winner. In this issue’s instalment of Europe’s 100 greatest rides, we’re looking at the final 20 routes which come pre-installed on the TomTom Rider 450, which are all located in Benelux (that’s Belgium, The Netherlands, and Luxembourg) and Germany.

Out of these 20, we’ve picked out two special routes that will satisfy your desires for thrilling riding, while also giving you the chance to discover the history and best attractions that each country has to offer. In Germany, we have an enthralling ride through the motorcycling paradise of the Black Forest in southwest Germany, as well as a gorgeous circuit through the Ardennes.

During the Second World War, the French believed the Ardennes to be the perfect natural defence against the tanks of the Nazis, with one general even calling it “Europe’s best tank obstacle”. While the Maginot Line protected the country’s borders with Germany and Italy to the east, it was believed that the densely forested hills and valleys of the area would prove too difficult to for the German army to negotiate. And what a mistake that was. 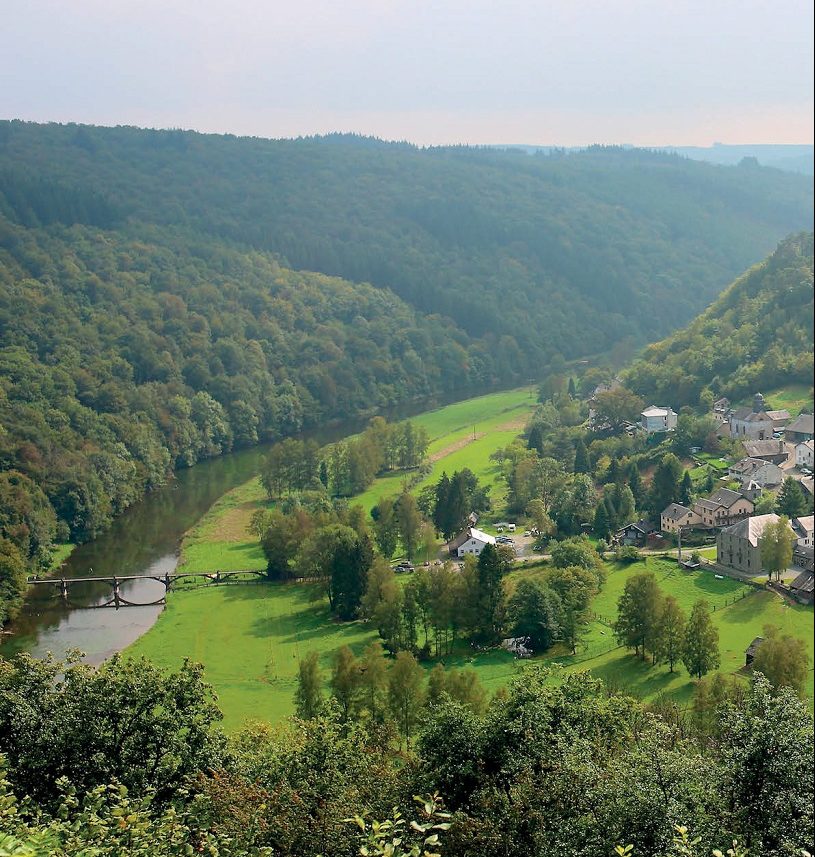 In May of 1940, the Germans pushed into Belgium and the Netherlands to the west, and slipped through the Ardennes with relatively little resistance. This masterstroke from the Nazis brought about the beginning of the end for France, and it took just over a month for the country to surrender.

Ah, Benelux. A trio of countries that seem to make up one of Europe’s most boring areas when it comes to quality of riding on offer. Put Belgium, the Netherlands and Luxembourg together and, on paper at least, it seems like the best way to experience the densely populated and mostly flatlands when on a motorcycle tour is to get your head down and blast through them until you reach Germany’s Mosel Valley.

At least that was my thinking until I started to educate myself on what these three great countries can offer, particularly Belgium. OK, the riding and scenery isn’t going to blow you away like the mountain passes of the Alps will, but here we have some fantastic roads that take you through areas that are rich in significant historical sites. And there’s world-famous chocolate and wonderful cones of frites (that’s chips) and mayo to boot.

This little circuit, which comes pre-installed on the new TomTom Rider 450, takes in some of the best roads, views and attractions in the Ardennes, taking you mainly through Belgium, but also dipping into Germany, Luxembourg and France. Along the way you’ll ride the wonderfully smooth and rollercoaster-like roads that now cut through the once impenetrable Ardennes Forest, seeing first hand just how beautiful this south-eastern area of Belgium is. 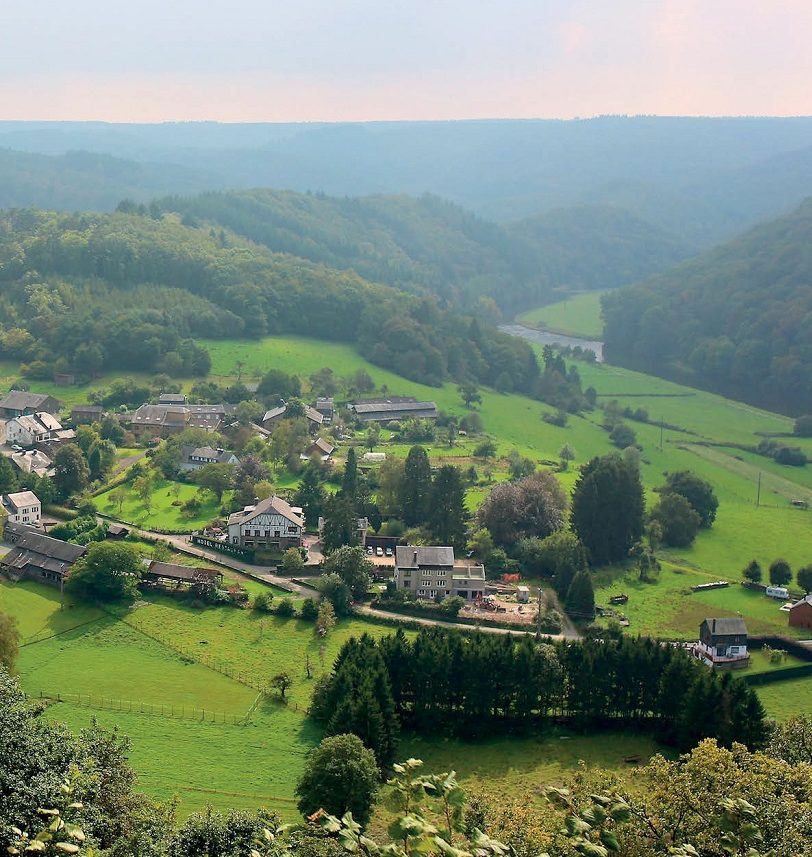 The Ardennes area can be likened to the Black Forest of Germany, but on a smaller scale, and while the mountains of the Alps rise to heady heights of over 4,000m, the highest ‘peak’ around here is Signal de Botrange at 694m (making it Belgium’s highest mountain). While the hills may not wow you with their stature, the beautiful valleys, which have been carved out of the land by meandering rivers, will delight you.

The route proposed here follows the most dramatic of those, and upon reaching the small town of Frahan, you’ll be rewarded with magnificent views of a particularly picturesque meander on the Semois River.

Of course, it’s almost impossible to visit the Ardennes and not see any reminders of the Second World War, and this route takes you by many. In La Roche-en-Ardenne it’s well worth visiting The Battle of the Bulge museum, where a fantastic exhibition displays many artefacts from the war, including one of a few remaining German Enigma machines. Further south and there’s the Bastogne War Museum, which again provides a wonderful insight into the significance of the area during WWII.

On my ride through the Ardennes, I had just finished watching the epic Band of Brothers series, and was particularly excited to pay a visit to Bastogne and Foy, which is just up the road. Those who have seen the series, or have a knowledge of Easy Company’s exploits during WWII, will know that this is the area where the infamous Battle of the Bulge, the last major German offensive of the war, took place.

Back in 1944 the place would have seemed like hell, with a bitter winter kicking in and enemy shells peppering the forest, but today, the area is a delightful place to be, particularly when you’ve got the weather, as the rolling, forested hills contain many great roads. 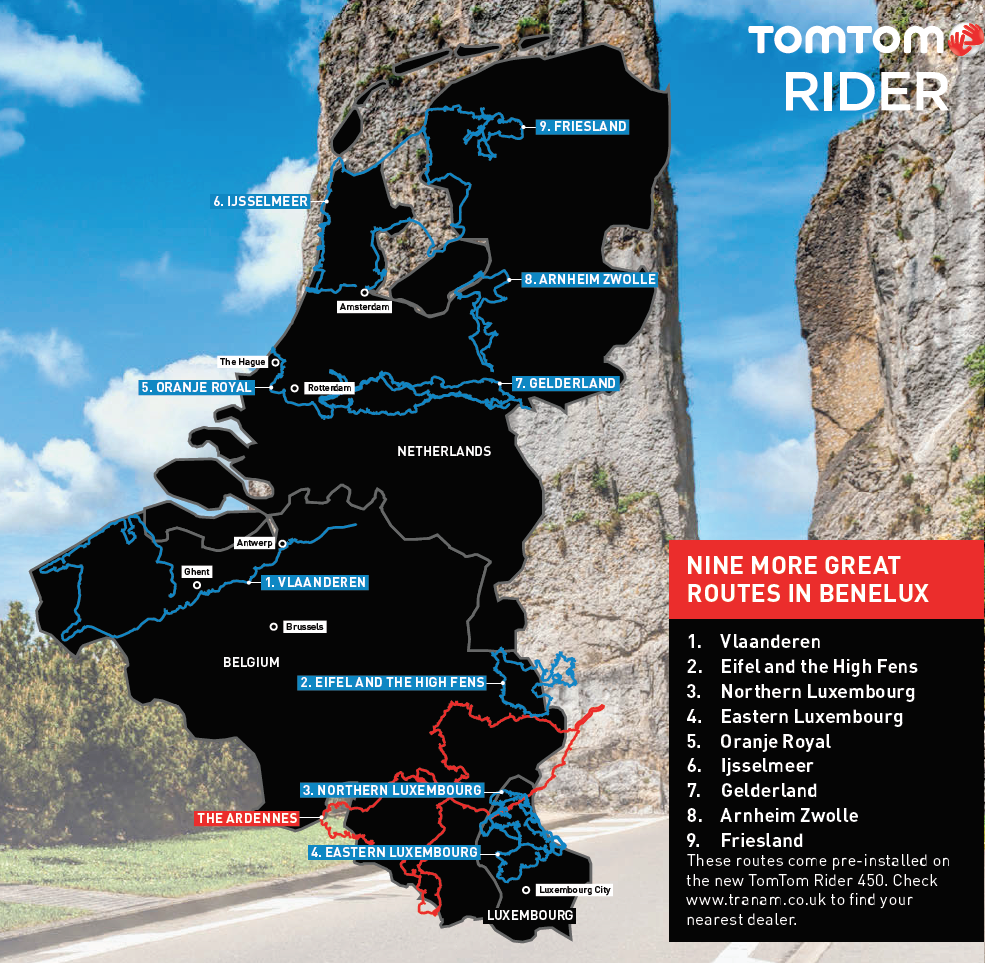 Want to ride these Routes? Here’s what you’ll need to know…

With mild and temperate climates, the Benelux countries (Belgium, the Netherlands and Luxembourg) can be toured for most of the year. Winters are cold, but not often extremely cold, and the summers are often warm, but not too hot. There is, however, frequent rain (but what’s a bit of the wet stuff to a Brit?), with spring and early summer offering the driest months.

All three countries are within easy reaching distance of the British ferry ports. Including travel, seven days will allow you to visit the major cities, towns and villages in all three countries, and you could easily pop over for a long weekend of riding.

A double room in a two-star hotel in the Netherlands is likely to start at about €70-80 per night. For cheaper options you can rent a private room in a house (on a B&B basis) from around €20-30 Euros per night or, cheaper still, check out the hostels which will set you back about €25-40. Prices will vary as you travel around, but you’ll also find numerous campsites with prices starting from roughly €15 per night.

If you’re looking to explore bustling, historic cities and to experience picturesque towns, storybook villages and interesting architecture, then the Benelux countries all have something great to offer.

The Benelux countries are small, densely populated areas with strictly enforced traffic regulations and a dense network of speed cameras (kinda like the UK then), so make sure you’re clued up on the rules of the road.

Every year for the past 13-or-so years, Alun and I have travelled over to Friedrichshafen on the shores of Germany’s Lake Constance to attend the largest outdoor industry trade show in Europe. This has given us the perfect excuse to travel around the continent every summer, and when we started we’d usually drive down to the Alps and get some climbing done.

In 2005, we summited the Eiger and the following year saw us standing atop western Europe’s highest mountain, Mont Blanc. Since then, we’ve ditched the hiking boots for textiles and helmets, and each year sees us riding over to the trade show.

While we’ve ridden some incredible roads, seen some magnificent sights and discovered some brilliant places, one night stands out in my mind. It was 8 July 2014 and we were riding through the Black Forest in Germany. That night Germany was playing against Brazil in the semi-final of the World Cup, and as we’d just spent the day riding around the Black Forest, we were eager to watch the game in a German pub.

So, we settled down in the beautiful city of Villingen-Schwenningen on the south-eastern border of the mountain range and swiftly found a bar showing the game. The place was packed with Germans supporting their team, and as the game kicked off everyone was in good spirits. 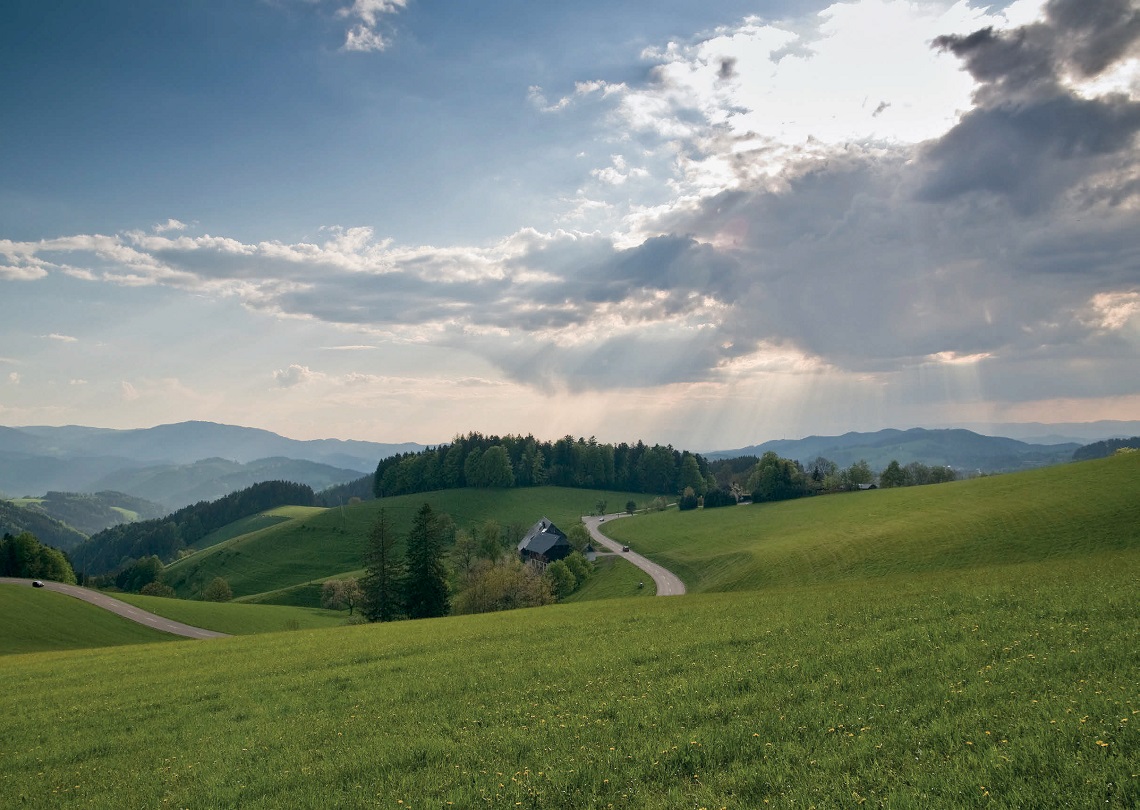 Just 29 minutes later and Germany were 5-0 up and the place was rocking! The game finished 7-1, and the city went mad, and being part of that is an experience I’ll always remember. This has also etched the day’s riding that preceded the German destruction of Brazil firmly into my mind, and boy, is the Black Forest a special place to ride.

As the name suggests, this area of Germany is a heavily forested mountain range whose highest peak, Feldberg, reaches 1,493m (that’s just over 100m taller than the UK’s highest mountain, Ben Nevis), and throughout the range, there are more thrilling roads to ride than you can imagine.

The tarmac is in superb condition for the most part, and the undulating terrain sees you rising up the thickly wooded mountains before falling once again into huge valleys that appear through the treeline out of nowhere.

While the mountains in the south are slightly larger, this fantastic route, which comes pre-installed on the TomTom Rider 450, will take you on a stunning route of discovery and enjoyment through the equally as spectacular northern half. Here, numerous hairpin bends compliment faster, more flowing sections of tarmac, including a road that’s always popping up on ‘best roads to ride in Europe’ lists – the B500.

The best thing about this route? It can easily be tagged on to a longer tour around Europe, and you definitely won’t regret heading through the Black Forest. One of my favourite ways to get to the Alps from the ports of Calais or Dunkirk, is to head through Belgium to the Ardennes, along the picturesque Mosel Valley and down into the Black Forest. 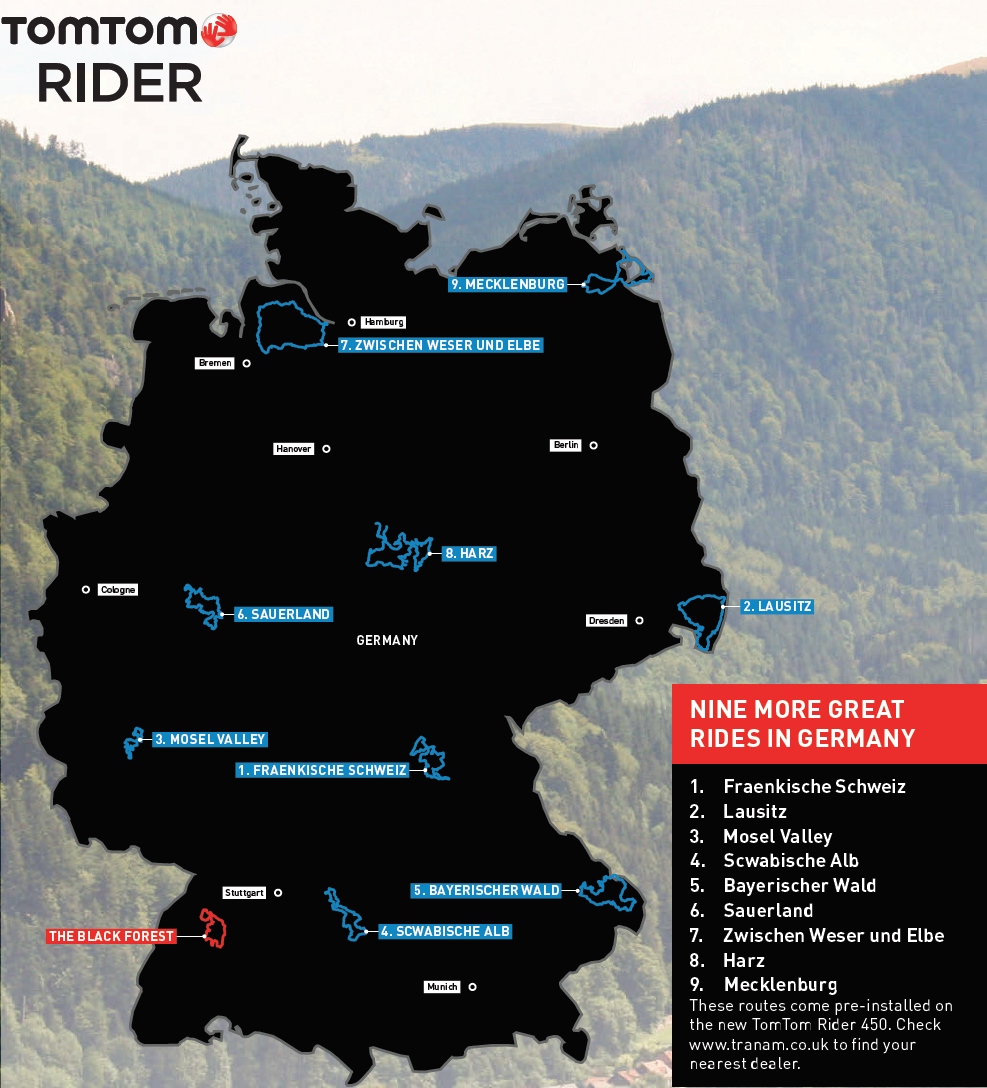 Want to ride these Routes? Here’s what you’ll need to know…

June, July and August can be very warm, but are also the months when Germany receives the most rainfall. For more settled weather and comfortable temperatures, May, September and early October are the best times to visit. The higher areas of Germany will see snowfall in the winter, and roads may not always be passable.

If you’re determined, you can get to Germany in a day from the UK by crossing the Channel early in the morning, but to make the most of any trip to the country you’ll be best off taking at least a week out of work. Extend that to two weeks and you’re in easy reaching distance of the Alps to the south.

Hotels can start from around €60. Look for family-owned Gasthofs which are often cheaper than hotels and offer good quality rooms and cheerful service.

If you’re looking for fantastic roads, great beer and good cuisine, then Germany is a solid choice for a two-wheeled tour.

It’s a huge novelty for British riders to experience the German autobahns and their lack of speed limits, but it’s important to remember that there are stretches where maximum speed limits are strictly enforced. These will be well signposted though.