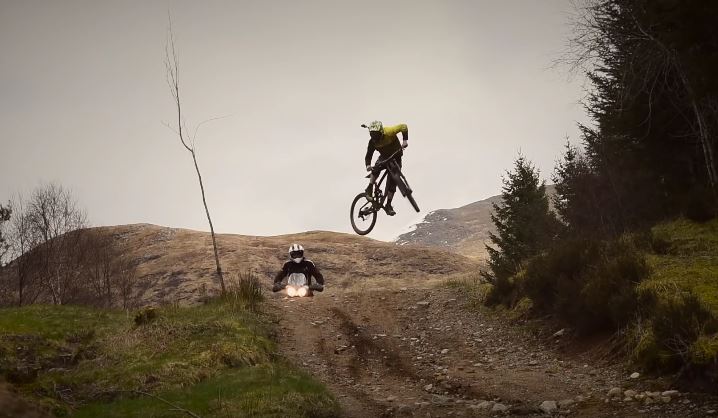 When it comes to close control and technical riding skills there aren’t many out there who are better than Kevin Carmichael. Since 1997 he’s been performing mind boggling stunts and tricks on two wheels, and we were able to witness them first hand on the recent press launch of the Triumph Explorer 1200, when Kevin made the beastly adventure machine look like a trials bike.

But now he’s taken to YouTube to display his credentials as he races Lewis Summers, the 2014 Senior British Down Hill Champion, along the tricky Nevis mountain bike course.

The video starts off by introducing us to the two riders as they begin their descent of a gnarly bike trail that’s described as “severe” in difficulty. First up is Triumph stunt rider Kevin on his Tiger 800XCx, followed closely by Lewis on his mountain bike (forgive me for not knowing the make or model!).

Admittedly on first glance Lewis’s riding takes the limelight as he manipulates his mountain bike around and over some tricky sections of the trail, making it look like a casual roll down a hill. In comparison, the Tiger looks laboured and slow, but when you take a moment to consider that Kevin is riding a machine that’s got to be 15 times as heavy as Lewis’s push bike, you start to build an appreciation for what he’s doing.

As the race goes on the displays of insane riding skills get more and more impressive as the two bikes jump in unison before finally coming to a halt in the carpark where Lewis falls off as he tries to high five Kevin!

The video is an awesome display of two-wheeled riding skills, both engine and pedal powered. Don’t just take our word for it though, take a look for yourself: