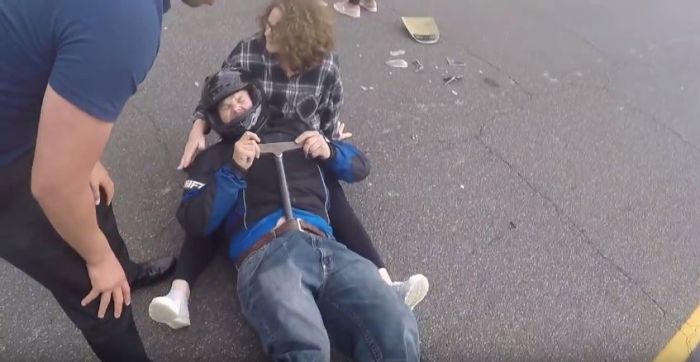 Bizarre footage has emerged showing a biker pulling a pick axe out of his trousers after a collision with a car.

The entire event was captured by another biker who was riding on the opposite side of the road before heading over to help his fellow motorcyclist. 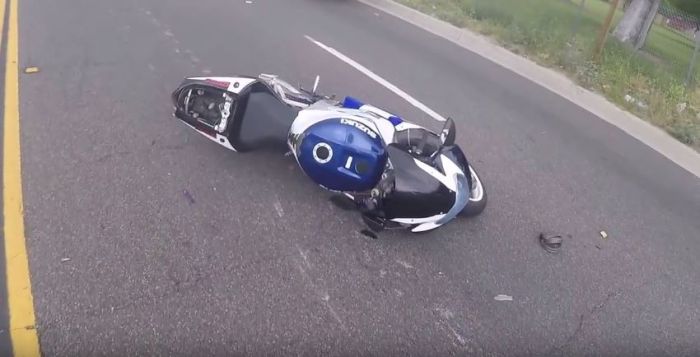 The incident came as a group of bikers rode past with another seemingly lagging behind. As the footage shows, the biker at the rear then crashes into the back of a car in front of him and is thrown to the ground.

Several people then rush over to help the felled motorcyclist, including the guy with the headcam, as he stumbles to his feet. Clearly dazed and injured, he then asks to be helped back down.

It’s at this moment that things take a very bizarre turn. Having settled back down on the ground the biker then remarkably pulls a pick axe from his trousers.

Following this, the biker who is capturing the entire thing on camera goes to check out the damaged motorcycle and can be heard whispering “it’s stolen”, perhaps explaining why the casualty was carrying a pick axe in the first place.

The footage comes to an end as a fire crew arrive on the scene to administer first aid and take control of the situation.

Check out the video below and then let us know what you think in the comments.

Video not working? Watch it here.