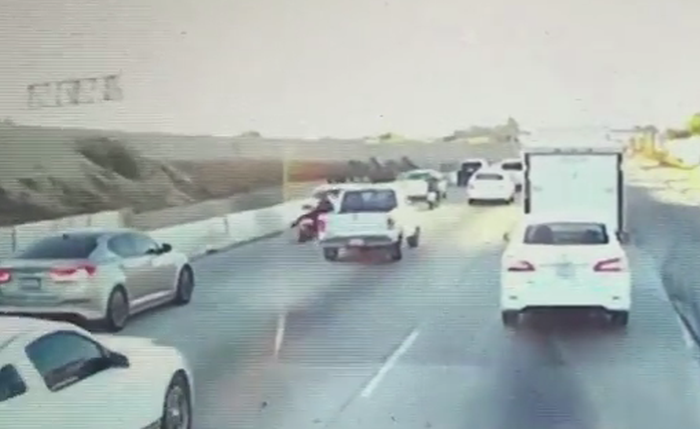 We’ve all experienced car drivers who seem to think that it’s unfair that motorcyclists can filter past them in slow moving traffic. I personally have had motorists move over in the lane in an attempt to block my way forward for no reason other than spite. Fortunately, I have never come across anyone like the driver of the pickup truck in the video below.

The clip starts innocently enough, showing slow moving traffic on the 101 freeway in Los Angeles with bikers filtering safely through the lanes. As they pass a pickup truck, the driver seemingly takes offence at being overtaken and veers into their path, knocking one of them off.

In an understandable fit of rage, the downed rider springs to his feet and launches himself into the back on the truck. The video then cuts out, preventing us from seeing what happens next.

The description on the YouTube video, which was uploaded by user ‘Dirtbag coffin’, describes the incident as such:

“A white Ford Ranger was gradually closing in on our group as we passed. He almost clipped the second to last bike. As I approached from the rear I back-handed the bed of his truck lightly to let him know we’re here, please stop moving in on us. He decided this was the best way to treat the situation.”

Check out the video here: