Watch: First person view of a tank slapper at 145mph 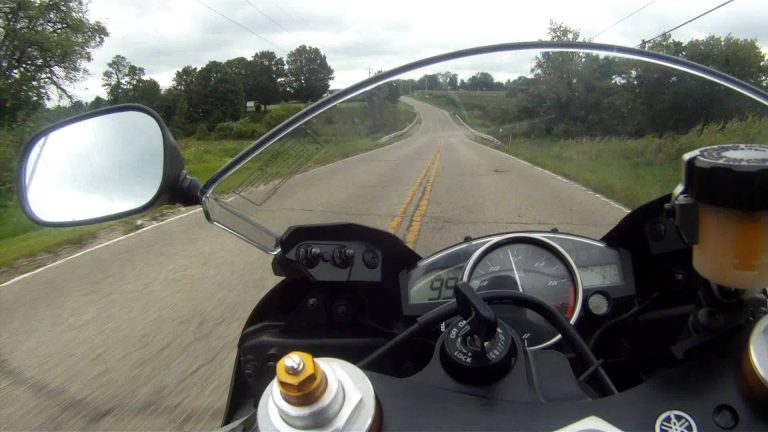 Tank slapper. Two words that strike fear into the heart of any motorcyclist. The phenomenon occurs when the front tyre becomes airbourne for a moment and then regains traction outside of the rear tyre’s alignment. Oscillations from the front cause the wheel to thrash back and forth, throwing the handlebars from side to side and making the bike buck violently.

In serious instances the ferocity of these oscillations can be enough to rip your hands from the bars, and your feet from the pegs, and that is all too often accompanied by fatal consequences.

Fortunately, it’s said that the more weight on the bike the less likely you are to find yourself battling with your beloved as it conspires to throw you from its saddle (there’s hope for those of us with a little extra junk in the trunk and overloaded panniers after all). But that doesn’t mean it’s not going to happen.

If you are unfortunate enough to experience one of these frightful occurrences, the advice given is to keep your weight forward and maintain a relaxed grip on the handlebars as the bike rights itself. Of course, ‘relaxed’ is the antonym to how you will be feeling as you feel your knees slapping the tank as the bike wobbles beneath you at speed.

Regardless, if you’ve ever wanted to know what it looks like to experience a tank slapper at high speed, then you only need to look as far as YouTube for tons of examples. The video I’ve chosen below makes for scary viewing and is shot from the perspective of YouTube user zachs13 as he engages in some reckless riding of his Yamaha R6. As he exits a bend (on what looks like a poorly maintained and well used public road) and opens the throttle, his speedo shoots up from 60mph to 145mph, at which point the bike begins to buck like an angry bull at a rodeo.

Amazingly the rider manages to keep the bike upright, though visibly shaken he rolls to a halt while muttering some expletives.

The description from the video comments: “Tank slapper at 145mph. My knees are still sore! Bike has full Akrapovic Racing exhaust, Power Commander 5, BMC Racing Air Filter and Graves Smog Pump block-off plates, plus some aesthetic stuff. This is the third time this has happened since I got new tyres!”

I think I speak for more than just myself when I say perhaps he should consider riding a bit more sensibly, and perhaps change the tyres. Though you have to admire the guy’s ability to keep cool and not panic when it happened. Riding a tank slapper for that long must have been terrifying.

Anyhow, check out the video here (the action starts at about 50 seconds in):