Watch: The heart-stopping moment a biker falls through a railway track 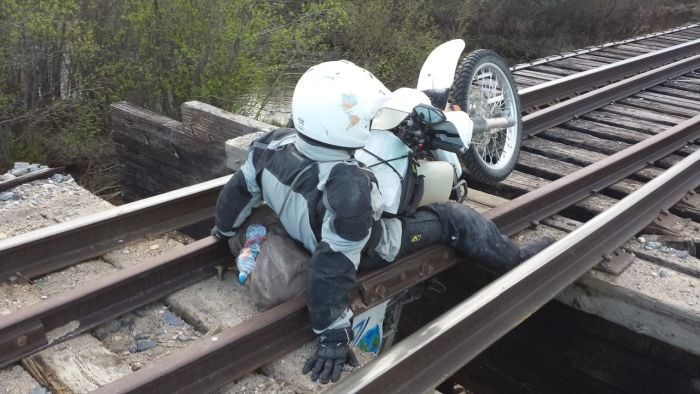 What is adventure without a few hairy moments? The moments where at the time you think ‘oh s*** this is it’, but once survived, you have a good old laugh about for many years later. Well, these two bikers certainly got a taste of just that when one of them took a heart-stopping fall as he was about to ride across a railway bridge, but luckily, had balls big enough to stop himself and his bike falling to the ground below.

Steve Green and his old friend Richard Whittaker were on a motorcycle trip from Denver, Colorado to Churchill, Manitoba, in Canada. The route they had planned that day took them over a railway bridge, as the train service had been suspended due to heavy flooding. So, with an empty bridge, they thought this would be the easy option to reach their destination. However, things didn’t quite go to plan and they were not expecting what happened next.

Steve rode up to the bridge’s embankment, and just as he started to ride across it, one of the sleepers gave way. Steve and bike dropped like a sack of spuds through the hole. Some expletives later (sorry), the two bikers had to quickly come up with a solution as Steve was left dangling, luckily unscathed.

“Oh boy – you might lose your bike man,” Richard exclaimed. “Do you have rope? Tie off the front of my bike. Do it fast, I’m holding it all with my balls,” Steve replies. To which he then says, “Go get a picture of me. Get a picture, I’m serious!”

After Richard took a photo, the bike slipped further into the space below the bridge and eventually was resting by its handlebars. The pair then sprung into action. They tied off the front and rear wheels and once the bike was secure, Richard went below and lifted it with his shoulders by about an inch. This enabled Steve to tie the bike slightly higher and this got the bike’s weight off of the rails, which allowed them to remove the handlebars and fit the rest of the bike through.

Once the pair had lowered the bike to the ground below, they reassembled it and were back on their way. Luckily, there was no real damage to the bike and Steve (and his balls) were left unharmed. Check out the video below.

We’d like to thank Steve Green (aka Esteban) and Richard Whittaker for the video, story and photos. You can see more of Steve’s biker videos on his YouTube channel.

Have you found yourself in a hairy moment while on a motorcycle adventure? We’d love to hear your stories. Let us know in the comments section below.