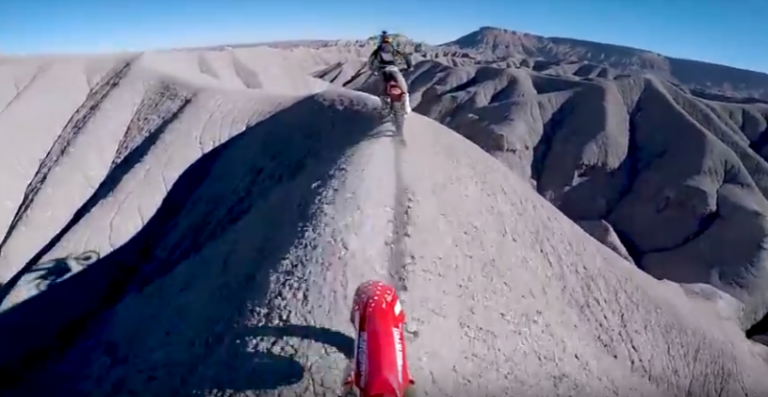 Here at the ABR office, we’ve been debating how on earth these two lads manage to even sit astride their motorbikes with balls so big? Our palms were sweating just at the mere sight of their action footage taken on one of the rider’s helmet cameras.

The pair were traversing a gnarly knife-edge ridge, which we believe is located in Grand Junction, in Colorado. It’s a popular place for many dirt bikers as the area boasts some thrillingly rugged trails, including this particular ridge route which has drops on either side that’ll leave you needing to promptly change your under crackers.

As if the ridge’s height isn’t sketchy enough, as the pair continue to speed along its spine, the dirt appears to get looser. “H-h-h-h-holy sh*t,” the rider wearing the helmet camera stutters (in a rather high-pitched tone). “It’s so narrow,” he continues, followed by inaudible panicking and laughter.

Just as he regains his composure, the rider in front slips and comes off the bike. However, handled like a true badass, he manages to stay on the ridge and not let his bike fall down to the ground below. After some laughter, the pair manage to drag the bike back upright, to which they then celebrate with a high-five and a “yeah, dude!”.

After deciding that the ridge is far too narrow to continue, the pair plan to ride down the least sheer side, which is still eye-wateringly steep, to reach the ground below. The guy wearing the helmet camera watches and films his friend who goes first and gives it a good effort before coming off about half way down. “[Laughter] Ouch… You good?” He jests down to him.

The guy wearing the helmet camera then gives it a good go himself, but within seconds he’d already tipped his bike. He continues pretty much the rest of his descent on the bike’s side in between eruptions of laughter and cursing. When he finally reaches the bottom, after catching his friend and engaging in some whooping, the pair celebrate with another well deserved high-five.

Check out the video for yourself below. Would you tackle this knife-edge ridge? We’d love to know your thoughts, let us know in the comments section below.