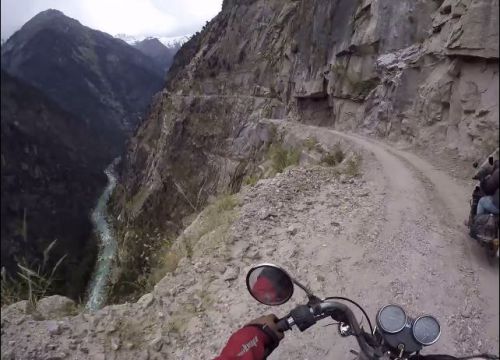 As breathtaking as it is scary, the road is carved into the side of a cliff with nothing to stop you from going over the edge apart from your own intuition. At various points there are also waterfalls that cascade across the track turning it into more of a river than anything else. As far as the road (if you can call it that) is concerned, it’s almost non-existent and consists dirt and rubble.

With the risk of rockfall an ever-present and the prospect of facing oncoming traffic a frightening one, this is certainly not a road to be taken lightly. Charanpreet Singh took it on, would you? Check out the absurd video below and then let us know on Facebook, Twitter or in the comments below.