Watch: Riders held at gunpoint as they try to enter Area 51 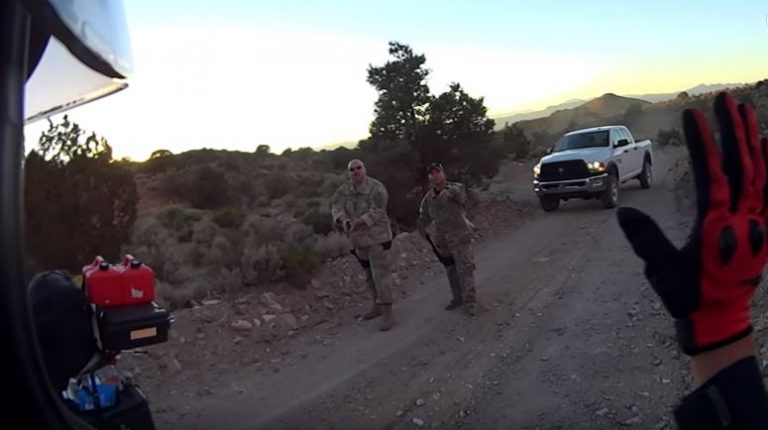 Just what goes on in Area 51? That question has been the subject of many conspiracy theories over the last few decades, particularly since the ’40s. In 1947 it was claimed that the government site was used as storage and testing facilities for the infamous Roswell UFO, as well as a meeting point for other extraterrestrial beings.

Other theories suggest that Area 51 is the site where weather control methods are developed, time travel and teleportation is practised, and where the “one world government” conducts most of its evil plans from.

Safe to say, the US military zone has been shrouded in mystery for a long, long time, but the veil was almost lifted by two adventure bikers who decided to ride to the ‘secret back gate’ of the area. At least that’s the impression you get from the reaction of the armed soldiers in this helmet cam footage.

The video, which was uploaded by YouTube user MacADVentures on 10 October 2016, starts off with two riders heading down a long, dusty road in Nevada, before they pass a white truck with two soldiers (or camo dudes, as the cameraman likes to call them) in it. 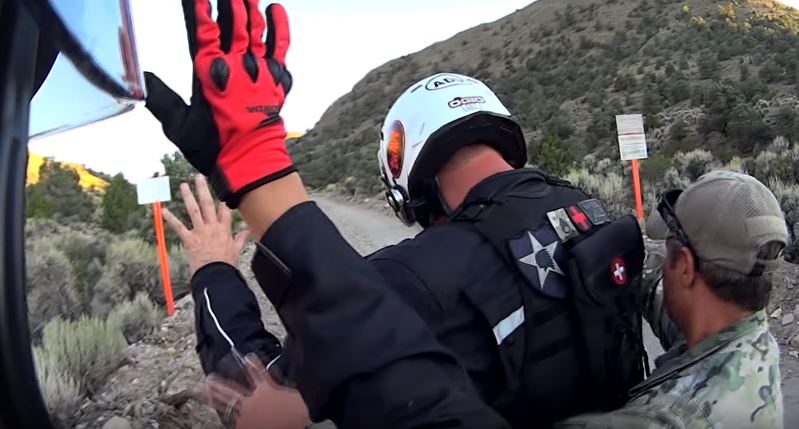 The “full-on camo dudes” take a good look at the bikers as they carry on with their patrol, and the riders think that’s the last they’ll see of them. That is until they reach a signposted area where they dismount their steeds.

“Guess what, we’re back!” the cameraman can be heard saying, after explaining that they were at the border of Area 51 just four months prior. Almost on cue, the truck with the soldiers in it appears around the corner and the camo dudes jump out, obviously not happy with what they’re seeing.

“Put your f***ing hands up! I’m not telling you again,” yells the tall, bald camo dude (who has a very well groomed moustache).

Tensions are high and you can sense the fear in both riders as they’re told to turn around. Somehow the second rider manages a cheeky smile for the camera as he does so.

The armed soldiers then begin to frisk the riders aggressively, kicking their feet apart while asking if they’re carrying. “We’re just adventure travellers,” is the response from the cameraman. 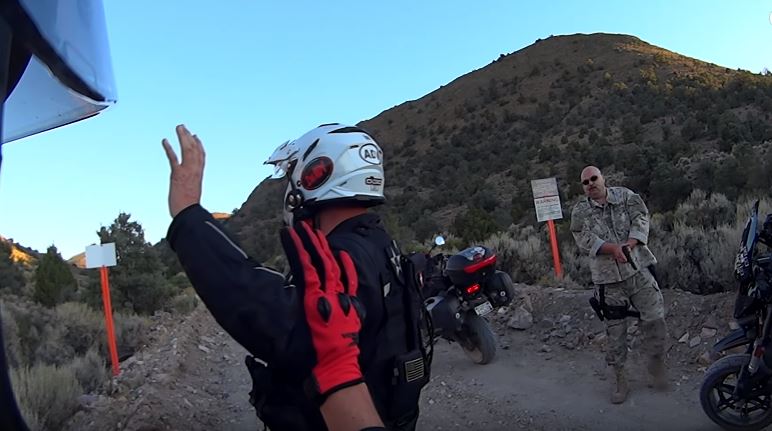 Once it’s decided that the two guys on the bikes don’t really pose a threat to national security or whatever secrets might be hidden in Area 51, the bald, moustached soldier gives them a chance. “We’re gonna give you guys a chance,” he says, still pointing his pistol at the chaps. “To get on your bikes and get the f**k out of here”.

It’s too good an opportunity to pass up, so the riders get back in the saddle and perform an agonisingly slow turn in the gravel road, when one comically gets stuck and has to call for help to be pushed out of the rocky side of the road.

The description claims that the footage is the “ONLY footage you’ll ever see of AREA 51 camo dudes holding civilians at gunpoint”.

While the full description elaborates on a potential ploy by the government to cover up the heavy handed approach to dealing with adventure motorcyclists. “Everyone share like crazy, we might have to take this down soon due to the US government!! Don’t let them hide this!! This is raw and shot in realtime. Not fake or PHONY! We bring you the extreme footage shot by use. I don’t know how long it will be up until the Gov’t makes us take it down!”

So, you heard the man, click play below before the camo dudes take down the video.