Watch: Chris Birch shows us how a big adventure bike should be ridden off-road 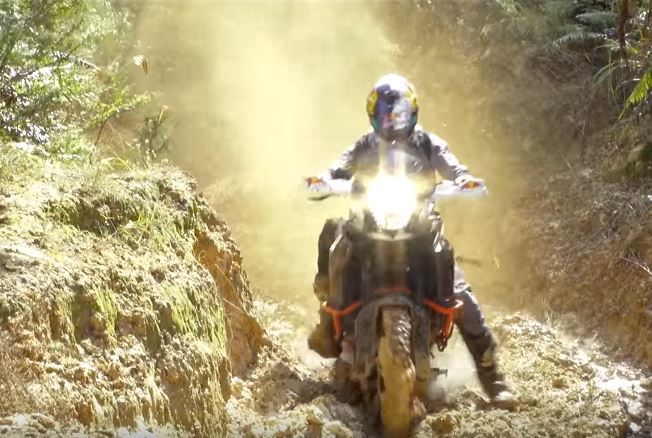 If there’s just one video you should watch that proves that big, weighty adventure motorcycles can be potent off-road machines, then this is it. It shows Chris Birch, a Kiwi with an impressive talent for commanding all things two wheels, thrashing his KTM 1190 Adventure R along a gnarly forest trail that’s full of ruts, knee-deep mud, expansive water crossings and tricky rocky sections.

It starts off with Chris meeting up with two pals, Phil and Bryce, who happen to be Red Bull Romaniacs veterans (basically, they’re shit hot at riding off-road), and their KTM 300 EXCs. Given the type of terrain that the trio will be traversing, their machines appear to be a sensible choice, so when Chris rolls his towering KTM 1190 Adventure R out of the van things start to get interesting.

Shot using a combination of on and off-board POVs, the video shows us two things: 1. How, in the right hands, a big, off-road focused adventure bike can tackle just about any trail, and 2. Just how much of a hero Chris Birch is. I mean seriously, he makes this ride through some incredibly gnarly terrain look like a gentle bimble to the paper shop on a Sunday.

Then again, Chris is a Red Bull and KTM sponsored, eight time New Zealand Enduro champion, three time Roof of Africa winner and world renowned extreme enduro competitor. So it’s safe to say he knows his way around a bike.

Watching how he navigates the rutted up terrain of the route to a place known to us only as ‘the hut’, is mesmerising, so grab some popcorn and enjoy: