Watch: here’s how a KTM 1290 Super Adventure R should be ridden 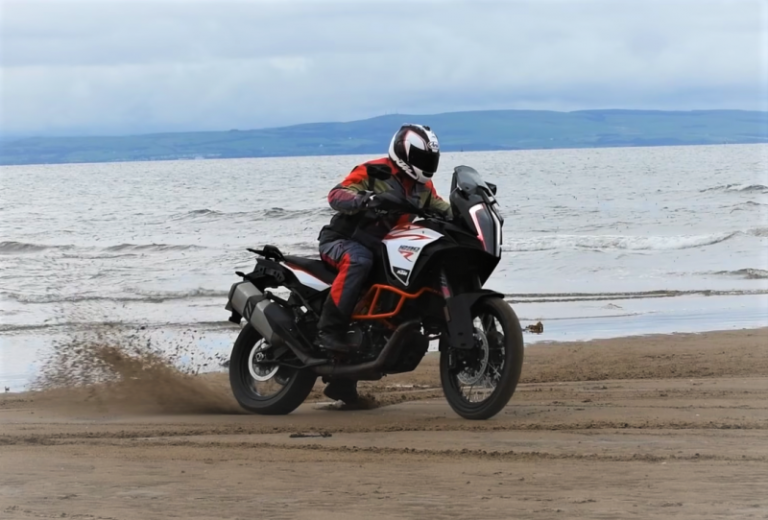 This incredible video of KTM rider Kevin Carmichael shows just what the 1290 Super Adventure R is capable of in the right hands, as he thrashes the machine through green lanes, on the beach, and well, just about everywhere he could get his hands on for a day of adventure.

Firstly, after popping his head out of his tent and suiting and booting up, the video starts with Carmichael effortlessly tearing up the sands of an empty beach. Opening the 1290 up to whopping speeds of over 130mph, and painting wiggly lines over the sand before he oh so casually pulls a few doughnuts out the bag.

After thoroughly shredding the beach up, Carmichael heads through a series of streams and green lanes before he takes to the asphalt and then for a spot of riding on the Knockhill racing circuit. He then proceeds to throw the 1290 R into the corners like its nothing more than a light on its toes 350, and if he didn’t already look bad ass enough, pops some serious wheelies and smokes the tyres.

It was at this point that we’d probably reached peak whooping and cheering here in the office. Damn, this guy seriously knows how to ride. You can check out the full video of Kevin Carmichael on the KTM 1290 Super Adventure R below below. (Also watch: Kevin Carmicheal take on a mountain bike on a Triumph Tiger 800XCx).

If you’d like to find out more about this incredible adventure beast (the bike, not Carmichael) then be sure to check out our full review of the 2017 KTM 1290 Super Adventure R. You can also check out more bike reviews on the review section of our website.