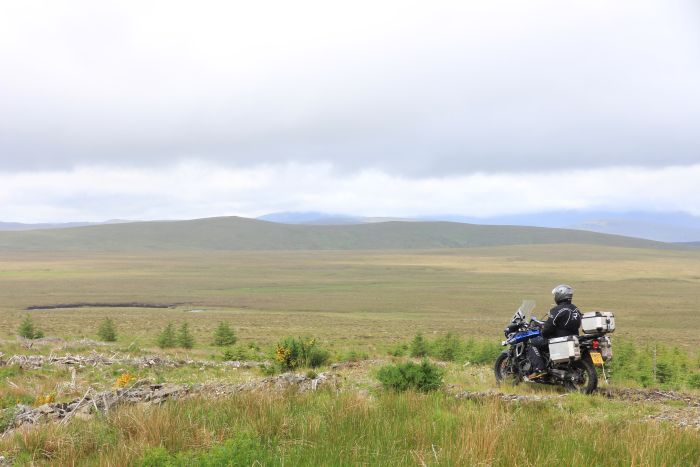 Over the last six months we’ve been riding a circumnavigation of Scotland, taking in sections of the country two days at a time. Our first route saw us discover the Southern Uplands, the second took us from Dumbarton to Fort William via Oban, then onwards to the tip of the Isle of Skye, while last issue’s epic ride followed the coast all the way from Fort William to Tongue, right on the northern coast of the country.

For this issue, we picked up where we left off, by plotting a two-day ride from Tongue all the way to Aberdeen. Our aim was to stay as close to the coast as possible, deviating every now and then to discover new roads and places. The result is a brilliant journey that will take you along some of Scotland’s most dramatic and wild scenery on day one, while letting you explore the many fishing villages and picturesque coastal roads on day two.

From Tongue, we follow one road all the way to Thurso, and what a road it is. If you forgot to have your morning coffee, the excitement of the A836 will wake you up. All along this stretch of tarmac you’ll have the rugged coast to your left, while the desolate moorland and isolated peaks of the highlands lie to your right. 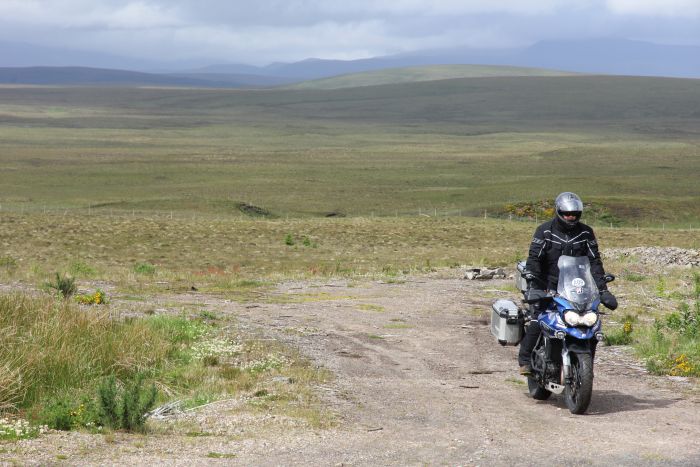 As you approach Thurso you’ll see the impressive sea cliffs of Hoy appear on the horizon, and it’s an island that’s now on my list of places to explore (which gets longer with every ride I take!). Within a few miles you’ll be standing at the northernmost point of mainland Britain, Dunnet Head, but as there’s not much to see here it’s off to John O’Groats for a coffee.

From the iconic point of John O’Groats, the riding to Wick is pleasant, but it’s the A99 after Wick that will get you smiling from ear to ear. The A9, which the A99 eventually turns into, is well known for being a spectacular road that’s plagued by average speed cameras in the south, but this stretch is just marvelous. It follows the coast for most of its length, snaking its way south while rising and falling with the undulating land.

You’ll be enjoying the A99 so much that it’ll be hard to pry yourself away from it, but at Helmsdale that’s exactly what we do as we venture inland towards Altnaharra. These roads cannot be ridden fast as they’re singletrack lanes with lots of blind bends, but the remoteness is worth the journey. 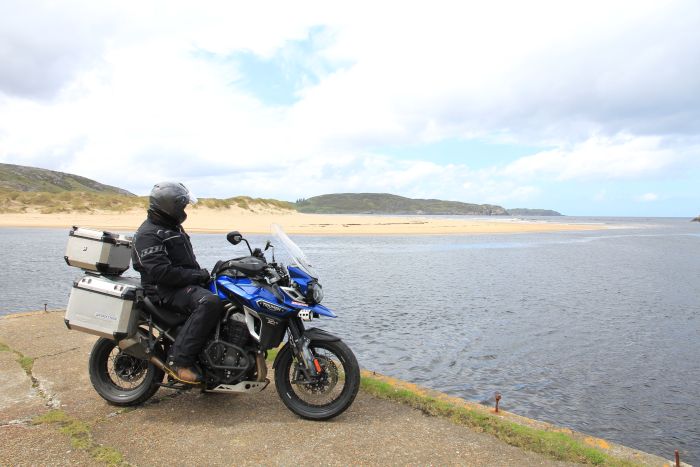 You can go for miles and miles without seeing another soul here, and it’s riding like this that makes Scotland such a special place.

Eventually, after tackling the brilliant road between Altnaharra and Bonar Bridge we reach our first overnight stop in the small town of Tain. Visit the Top Tain Curry Club for some of the best fish and chips around.

Day two isn’t as spectacular as day one, but it provides you with a chance to explore a different side of Scotland outside of the Highlands. From the haunting grounds of Culloden Battlefield (which was the last battle to be fought on British soil) to the picturesque fishing villages that dot the coast, there’s plenty to see.

You might be tempted to head south here and play in the impressive Cairngorms National Park, but that’s where we’re headed next issue.

Our route eventually comes to an end in Aberdeen, where you can reflect on an epic two days of discovery in Scotland. 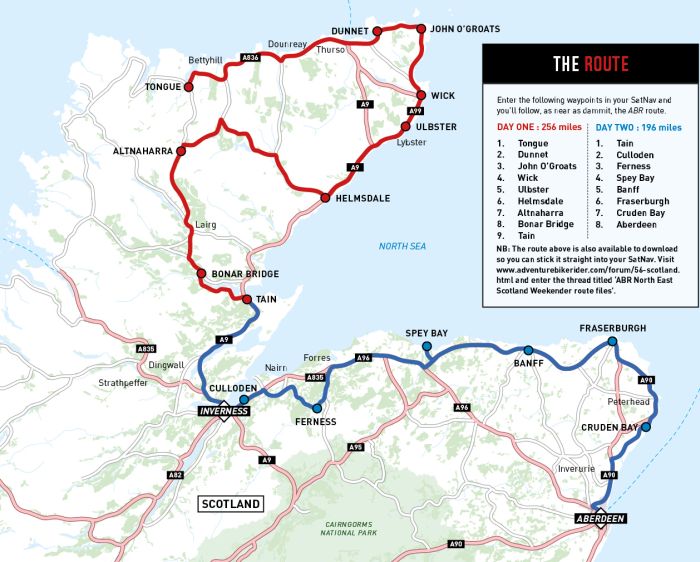 As you head south out of the harbour town of Wick, about seven miles down the A9 you’ll ride through a small collection of houses in a place called Whaligoe. While it might look like there’s not much of note here, you’ll be richly rewarded if you take a brief diversion to see the Whaligoe Steps. 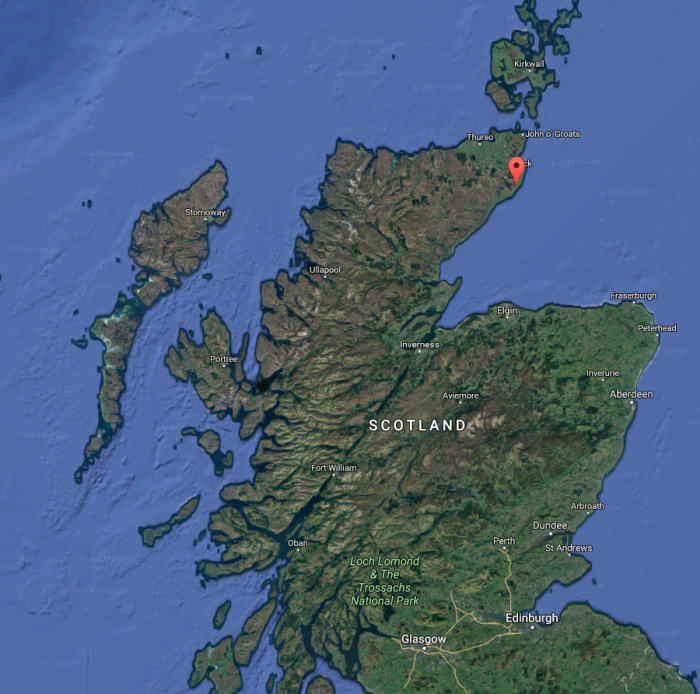 This beautiful, dramatic natural harbour is surrounded on three sides by huge sea cliffs, and the only way down is by a series of over 330 steps which zig-zag you down the steep rock face to a small grassy area below. Here you’ll find a remarkable ruin of a building, and a clue as to why these incredible steps exist. In the late 1700s a chap called Captain David Brodie decided that this harbour would be the perfect place for fishermen to dock with their boatloads of mainly herring. 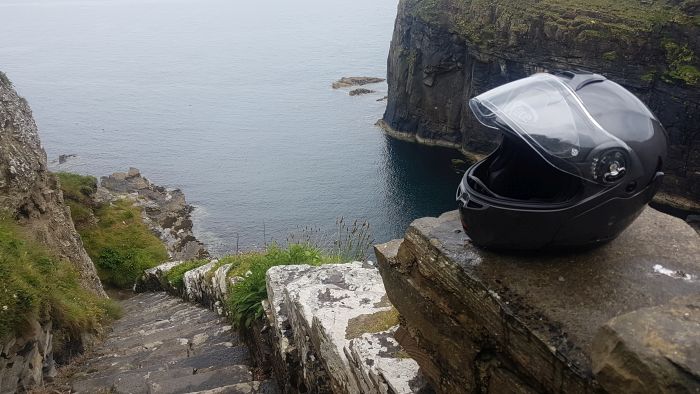 The ruined building was where the fish was gutted and salted before being transported onwards. A word of warning – it’s a physically demanding task to climb back up the steps, especially when wearing bike gear, so make sure you’re up to the job before you commit to walking down them! Whaligoe Steps are not signposted from the A9, so as you’re heading south keep an eye out for a crossroads where the right-hand side is signposted ‘Cairn of Get’ – turn left here past the row of houses and you’ll find a carpark and a café. 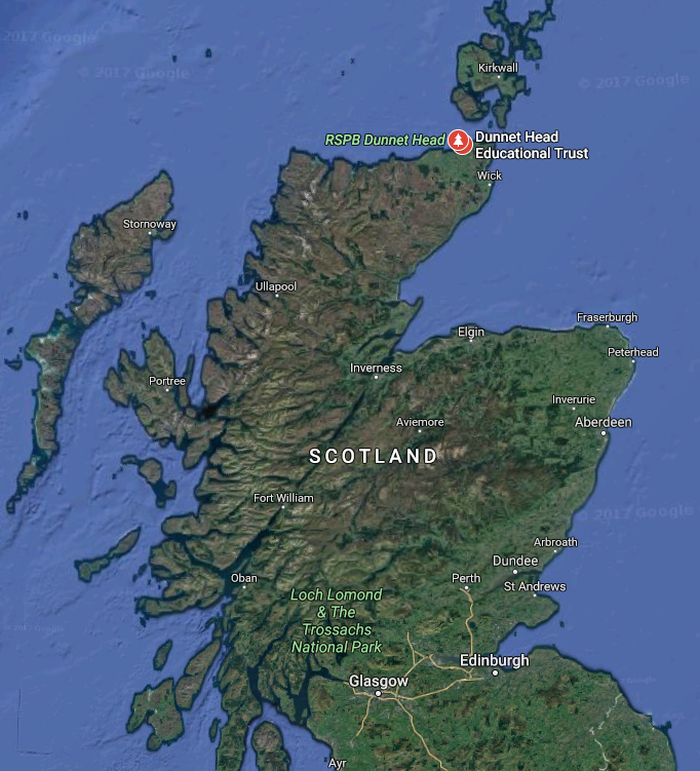 While John O’Groats hogs the limelight in the far north east of Scotland, it’s Easter Head on Dunnet Head that we’d recommend visiting. This is the most northerly point of mainland Britain, and to get there you take a small single-track road off the A836. While there’s not much there in the way of facilities (a nice coffee shop wouldn’t go amiss), take some time to stroll around the lighthouse and the World War II fortifications. 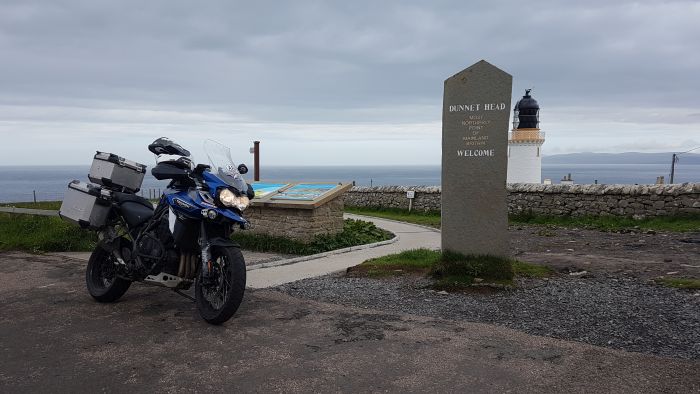 Out towards the sea, in the distance you’ll see the impressive and dramatic sea cliffs of Hoy. Of course, while you’re up here you might as well head east towards John O’Groats for a picture in front of the sign post and a bite to eat at one of the many cafés that can be found in the tourist hotspot. 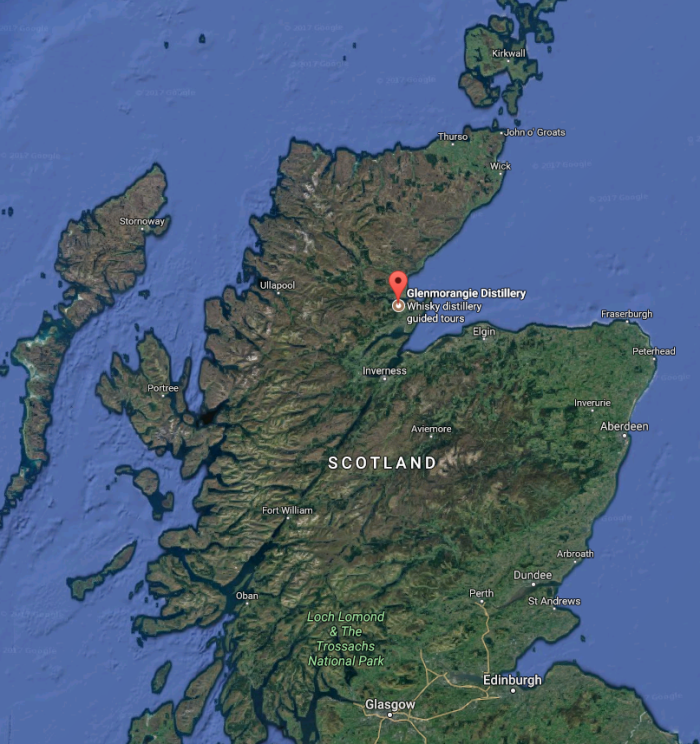 As I’ve said before, no visit to Scotland would be complete without a visit to a whisky (whiskey is Irish) distillery, and Glenmorangie near the town of Tain is an excellent choice. Here you’ll be able to embark on the company’s Heritage Tour to discover the fascinating history behind the distillery, get some lunch and, of course, sample some of the produce. 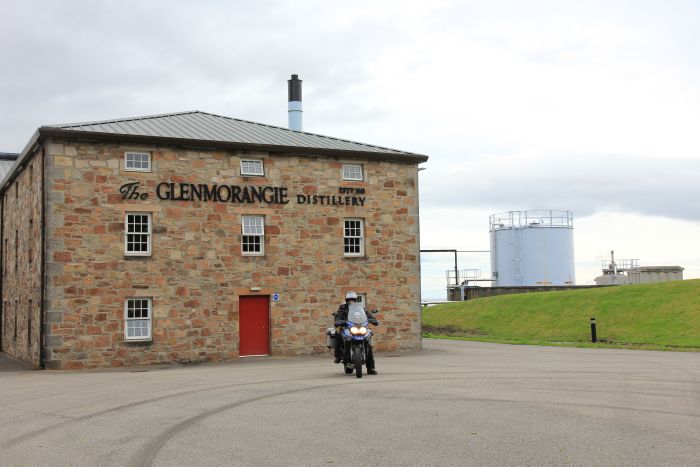 You can also take a walk to the Tarlogie Springs, where Glenmorangie sources its water from. It goes without saying that you should be responsible when it comes to drinking and riding, and you’ll be pleased to know that the distillery is close to our first night stop, so if you have the time it’s worth finding a hotel and making your way to the distillery by alternate methods so that you can enjoy the tasting. 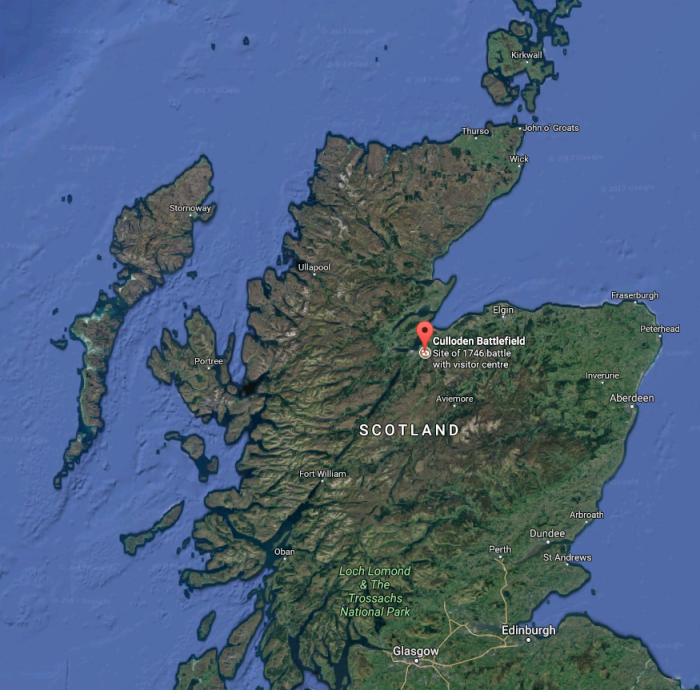 On 16 April 1746, the Jacobite Uprising came to its bloody conclusion in an area of moorland to the east of Inverness. Loyalist forces met with Jacobite troops, who were seeking to restore the Stuart monarchy in England, in what would be the last battle fought on British soil. In less than an hour the battle came to a bloody end, with between 1,500 – 2,000 men killed, over 1,000 of them Jacobites. 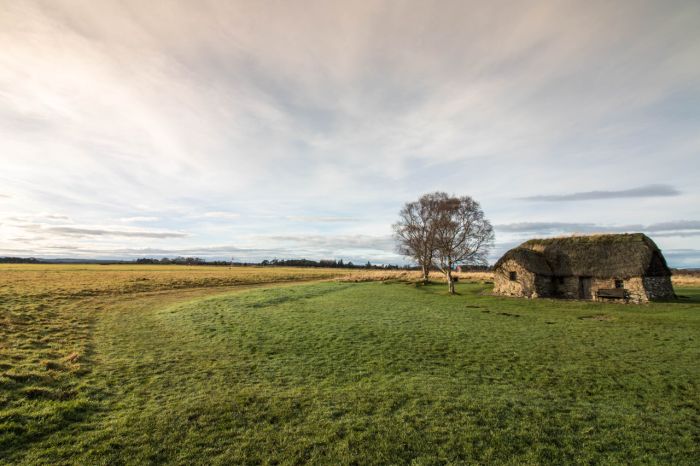 The comprehensive defeat to Charles Edward Stuart’s forces effectively brought his uprising to a crushing end as his forces all but disbanded and he retreated to the moors where he went in to hiding before eventually departing to continental Europe. Today, Culloden Battlefield is a remarkable visitor attraction, with a fascinating museum and exhibition made from the actual battlefield. To stand on the very ground where such a slaughter took place is a harrowing experience, and one I would fully recommend. 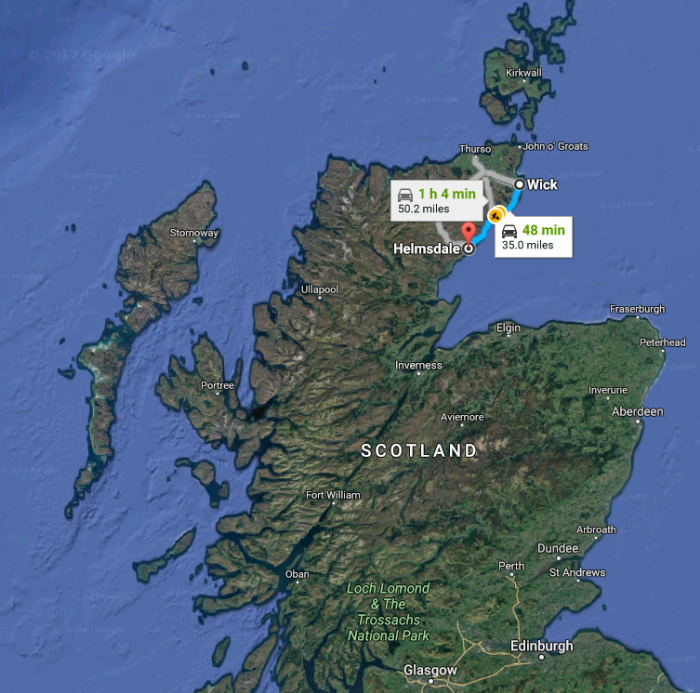 The A9, which runs for 250 miles from Thurso to Stirling, is a wonderful road surrounded in most parts by some of Britain’s best scenery. While the southern parts of the road are plagued by consistent average speed cameras, the section from Wick (which is actually the A99) to Helmsdale is incredible. 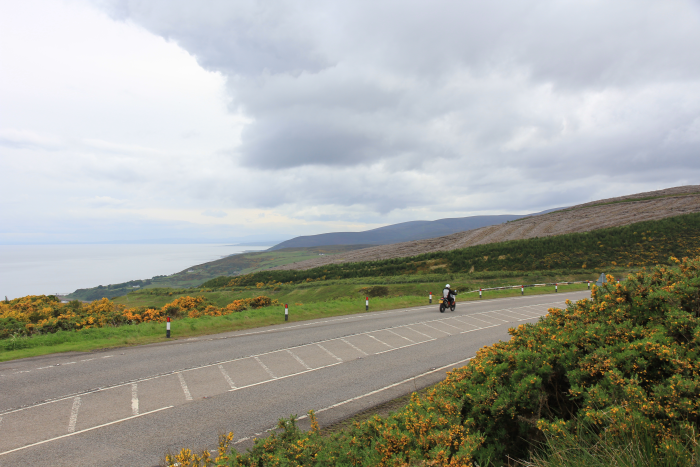 Here you’ll ride a road like a rollercoaster as the tarmac follows the beautiful coastline, rising and falling and twisting and turning for miles on end. We travelled this stretch during rush hour, and there was barely a soul on it so we got to enjoy the sweeping bends to ourselves. As we reach Helmsdale it’s tempting to continue on the A9 in the hope of more of the same, but we turn inland on to another glorious road, the A897. 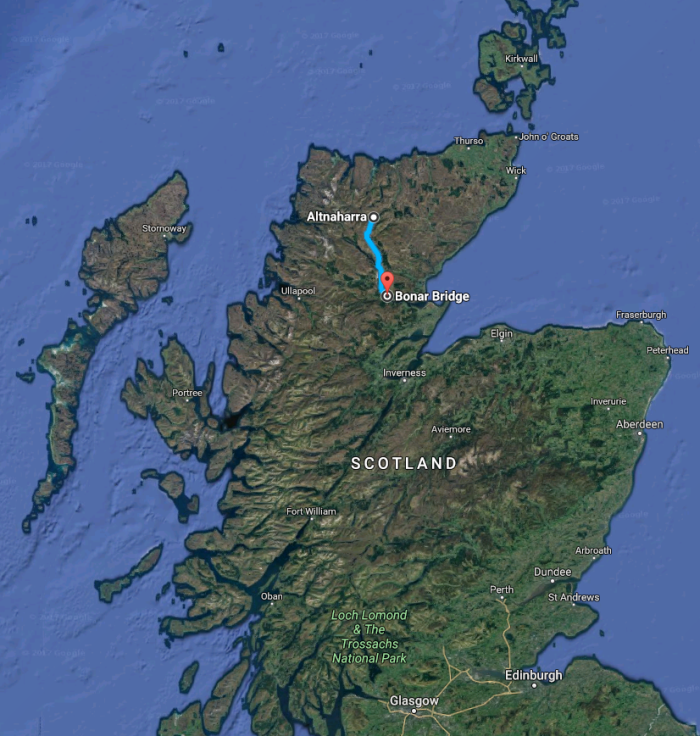 In all honesty, there’s not a bad road to be ridden in northern Scotland, but there are some that stand out above the rest for one reason or another. The section of the A9 that we spoke about earlier, for example, offers fast-paced riding with great bends and scenery, the coastal road from Tongue to Thurso is also spectacular, but this 20-mile stretch of tarmac between Altnaharra and Lairg is special. 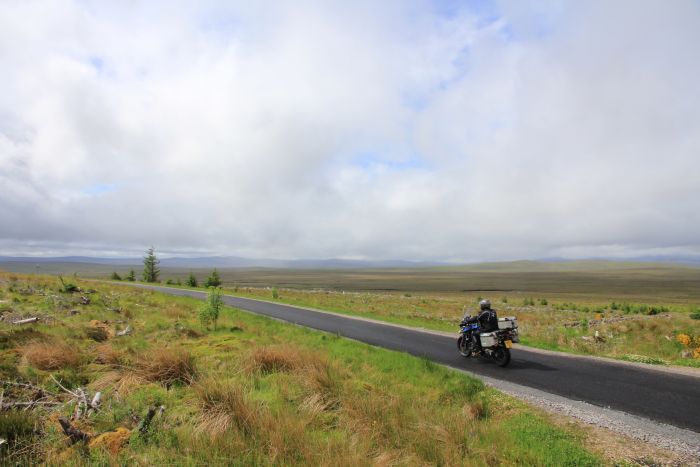 As you ride through the deserted heartland of northern Scotland you really get a feeling of being in the wild, and the views all around the single-track lane are special. You won’t be able to pick up much speed as you head south, but you won’t want to as your view will be transfixed on the vast, beautiful nothingness to your right. As you pass Lairg you might want to make use of the petrol station, before you head south towards Bonar Bridge where the road widens and wriggles through the wooded landscape. Beware of logging lorries here though.

Located in the heart of Tain, the Royal Tain Hotel is the perfect place to stop at the end of day one. The rooms are nice, the hotel has a car park where, so we were told, the bikes are secure, and the breakfast is spot on. For dinner, we decided to head down the road about 100m to Top Tain Curry Club where you’ll find some of the best fish and chips around, as well as top nosh curries. A room in the Royal Tain Hotel will set you back about £70 for bed and breakfast.

Our two-day tour finishes in Aberdeen on the east coast of Scotland. There’s no shortage of hotels here, so just fire up Late Rooms on your arrival and you’ll get somewhere affordable with no issues at all.

Bridgestone Battlax A40s
We teamed up with Bridgestone to ride this route of discovery, and so we fitted our Explorer with a pair of Bridgestone Battlax A40s. Developed specifically for adventure riding where you’ll be riding over changing surfaces, are is often the case on the back roads of Scotland, the A40s performed admirably well, keeping the Triumph and me upright on the twists and turns. The ride was smooth and reassuring, even when the rain started falling.