A weekend motorcycle route through the Cairngorms and South-East Scotland 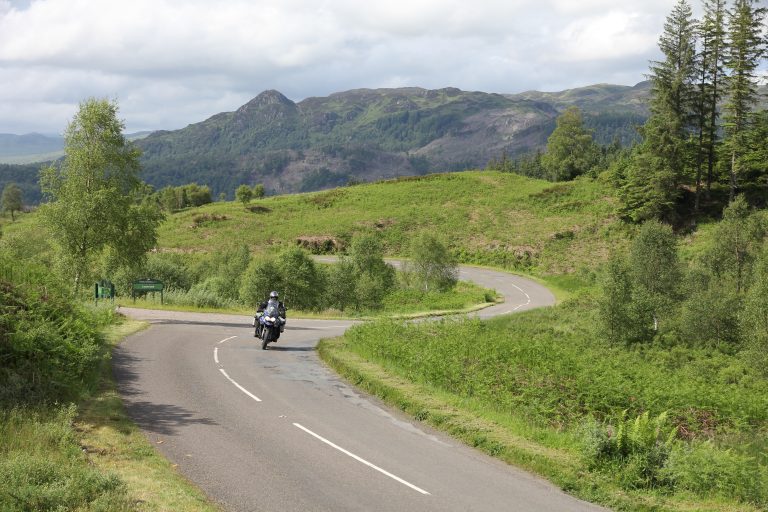 Whether we’re looking at destinations further afield, or right here in Britain, Scotland will always come out top of our lists of places to ride. Many of our Discovery routes have crossed this beautiful riding country, so we’ve put together another show-stopping route within touching distance of the North of England that will take you through the Cairngorms, across to the Trossachs and finally finishing on the Scotland/England border at Berwick-upon-Tweed.

The route herein has been designed to be easily rideable over two days, allowing you enough time to explore the various locations we’ve suggested. If you’re into your whiskies, there are worse things to do than spend an extra day around the Spey Valley and visiting the many, many distilleries that call the place home (leaving your bike at the hotel, of course). 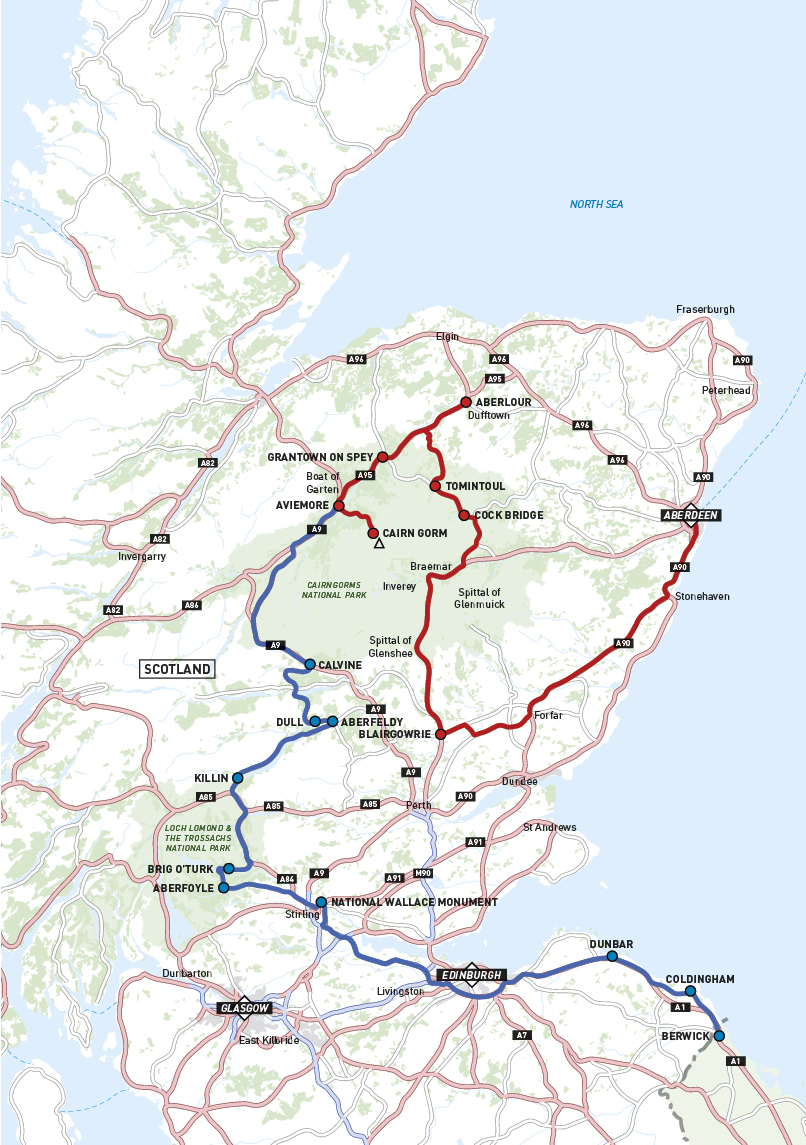 Our ride starts in Aberdeen on the coast, but we don’t hang around as we make a beeline down the A90 to Blairgowrie. Now, sitting at the southern border of the Cairngorms, we begin a day of exceptional riding around the national park.

First up is Glen Shee and the highest road in the UK, followed closely by the awe-inspiring Lecht Road (which is also the second highest road in the UK), which then drops you down into whisky country. Day one finished with a thrilling ride up Cairngorm Mountain, where the views of the surrounding area are sublime.

The following morning, we depart Aviemore with Berwick upon Tweed being our ultimate destination. The road we take first is the A9, an arterial road which stretches from Falkirk to Thurso on the north coast. While the road is heavily speed trapped, with average speed limits enforced for most of the way, the views on either side of the tarmac more than make up for it and I found myself more than happy to sit at 50mph.

After the thrills of the Cairngorms it’s easy to think that the rest of the tour is there to just make up the miles, but that’s not the case at all. Admittedly, after turning off the A9 at Calvine, you’ll soon pass through the village of Dull, which is amusingly twinned with Boring, Oregon, and the wild mountains that you passed through earlier seem a distant memory.

Dull is actually a pleasant place, and shortly after you’ll pass through the picturesque town of Aberfeldy. If you’re in the mood for a coffee, this is the place to get it. From Aberfeldy, we head west towards Loch Lomond, Scotland’s largest lake. 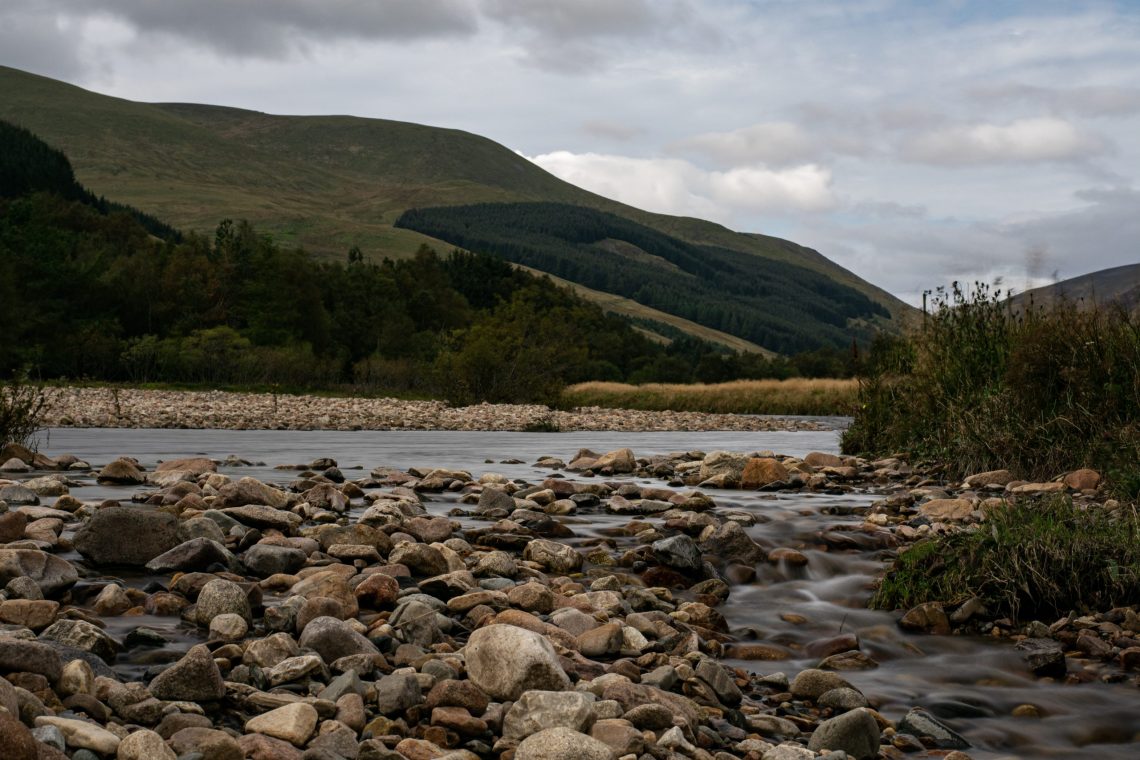 We skirted the western shores on a previous routes, but this time our target is a rollercoaster of a ride just a few miles to the east. Duke’s Pass has to be one of the most fun roads to ride in the UK if you catch it on a good day when the sun’s shining and there’s not much traffic.

It’s hard not to finish Duke’s Pass with a smile on your face, and from Aberfoyle the route will take you on a pleasant journey through middle Scotland, stopping off in Stirling to explore the National Wallace Monument which stands proudly above the city. After Stirling, we skirt Edinburgh before joining the coastal roads near Dunbar and heading down to Berwick upon Tweed.

Day one showcases some of Scotland’s mightiest and most beautiful mountains (it’s no coincidence that the Queen has a home up here, Balmoral Castle), while day two will allow you to explore areas of Scotland that you’d probably overlook when riding around the country.

Top things to see, discover and ride along the way 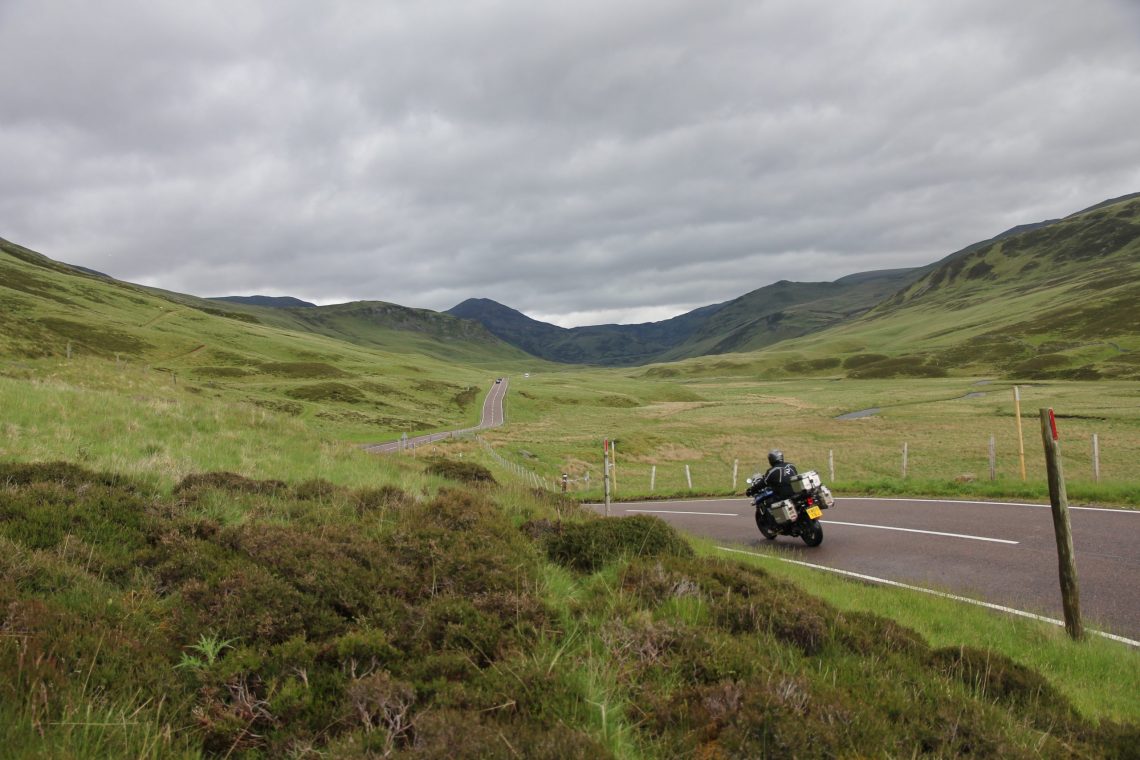 While we may start in Aberdeen, our route initially takes us south towards Dundee along the A90. With the peaks of the Cairngorms looming so close to the west you’ll be tempted to ignore my suggestion, but there is method to this madness.

By entering the national park from the south, we can ride up the majestic Glen Shee and The Cairnwell, the UK’s highest motorable pass at 670m. This beautiful valley was once known as the glen of the fairies, and that gives some indication of the enchanting nature of the scenery.

The riding here is great, even though the most exciting part of the road, known as the devil’s elbow, has since been bypassed, and while it’s tempting to open the throttle and enjoy the rollercoaster-like road, you’ll be too busy admiring the views all the way to the Glenshee Ski Centre. 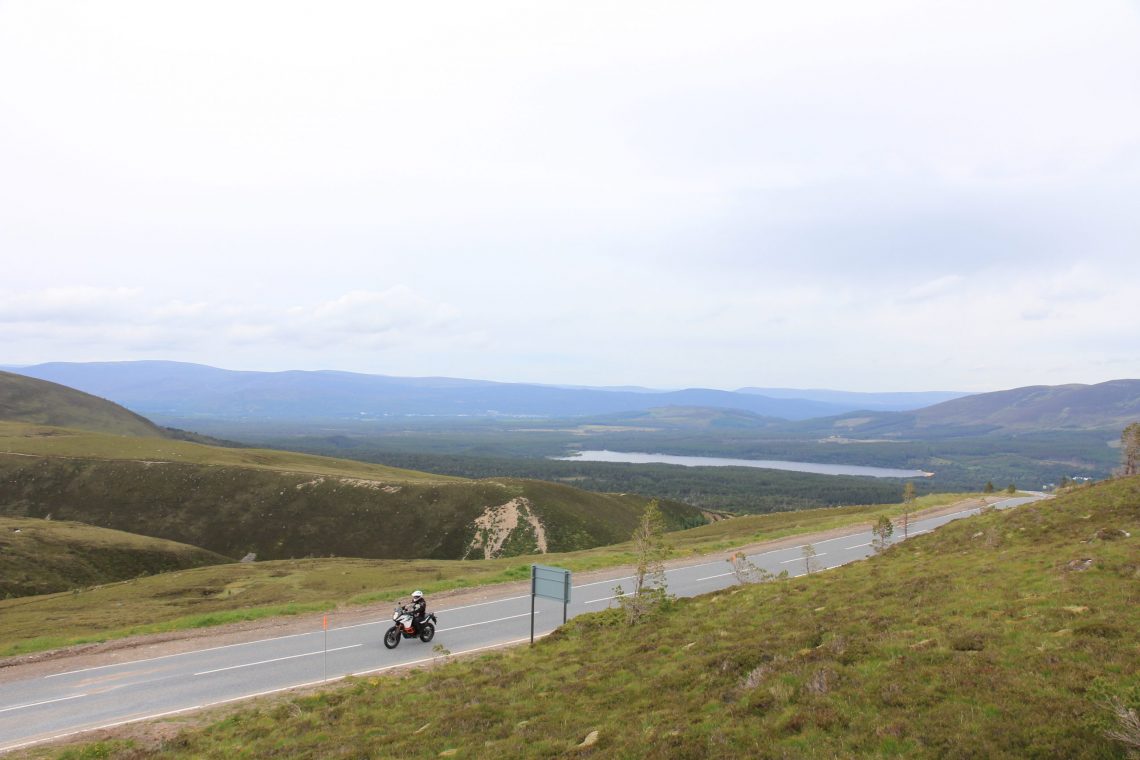 As you ride through the town of Aviemore it’s impossible not to pick up on the place’s outdoorsy vibe. I’d liken it to Chamonix in the French Alps, and while that has Mont Blanc (and a tonne of other spectacular peaks), Aviemore claims Cairn Gorm as its own. The national park which the mountain sits in gained its name from the mountain (CairngormNational Park).

As there’s a popular ski resort halfway up the mountain, bikers are treated to a stunning 12-mile ride from Aviemore which takes you at first through thick woodland before rising in a series of exciting bends to an altitude of 604m. Once at the carpark, if you’ve got the time, take a trip up the UK’s highest funicular to the UK’s highest restaurant, the Ptarmigan, for a spot of lunch and incredible views at 1066m.

You’ll even get chance to see the highest post box in the British Isles (cue sounds of amazement). 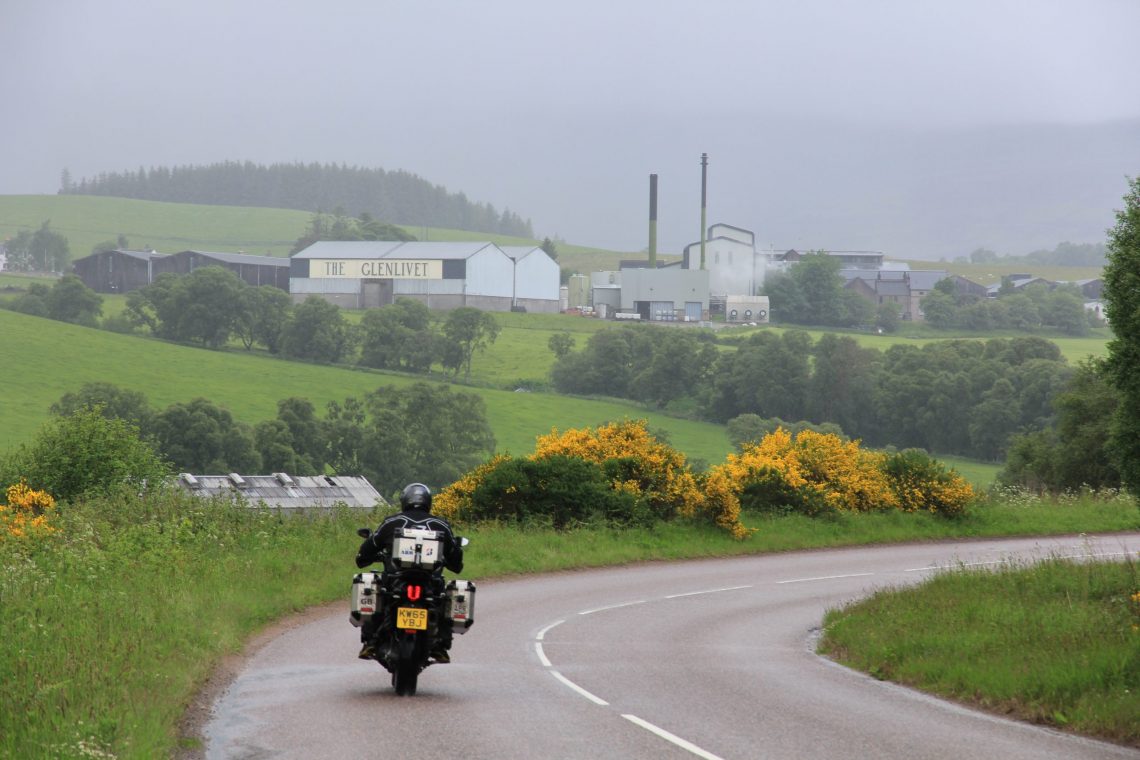 After dropping down from the Lecht into Tomintoul, you’ll begin to see more and more signs for whisky distilleries for you are now entering the world-renowned Spey Valley.

Here, more whiskies are distilled than in anywhere else in Scotland, including the two best-selling whiskies in the world, The Glenlivet and Glenfiddich. If you’re into your whiskies then it would definitely be worth spending a day around the area exploring and visiting the numerous distilleries.

As we near the end of our ride, two structures will dominate the surrounding landscape. One is Stirling Castle, the other is the beautiful National Wallace Monument. Built in 1869, the 67m-high tower was erected to commemorate the 13th Century Scottish hero Bravehe… Sorry, Sir William Wallace.

Aside from the impressive nature of the structure, which is a moving tribute to the Scottish knight, the tower houses many artefacts that are believed to have belonged to William Wallace, who became an influential leader during the Wars of Scottish Independence in the late 12th and early 13th Centuries.

Most impressively on show is the Wallace Sword, a gargantuan blade that measures in at 1.63m (that’s 5ft4), and weighs close to three kilograms. 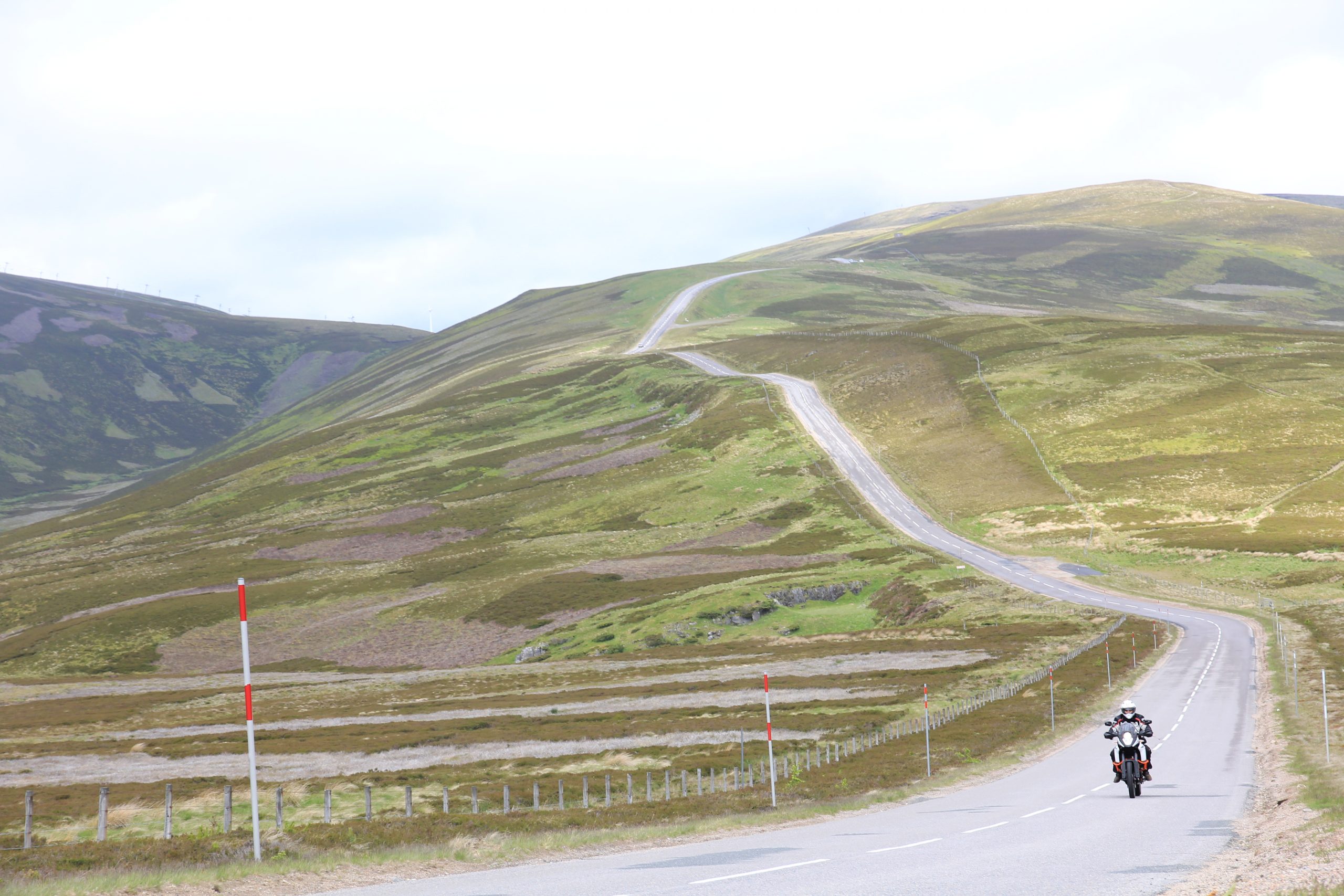 Between Cock Bridge and Tomintoul lies one of the UK’s most fascinating roads – the Lecht Road. This 9.5-mile long stretch of tarmac combines steep inclines, epic views and dramatic weather to make it both engaging and exciting.

Riding from Cock Bridge, after rising sharply for a few miles, you can see the road stretching its way up a mountain ridge, leaving it exposed to the full force of any weather systems that pass by.

Snow poles on the side of the road hint that this route is regularly under the white stuff in the winter, and while we were there a ferocious wind was blowing from west to east.

Despite the weather, the riding is magnificent as you crest numerous false summits before you reach the apex of the pass at 775m, making it the UK’s second highest road, behind Glenshee Pass which you’ll also ride on this route. 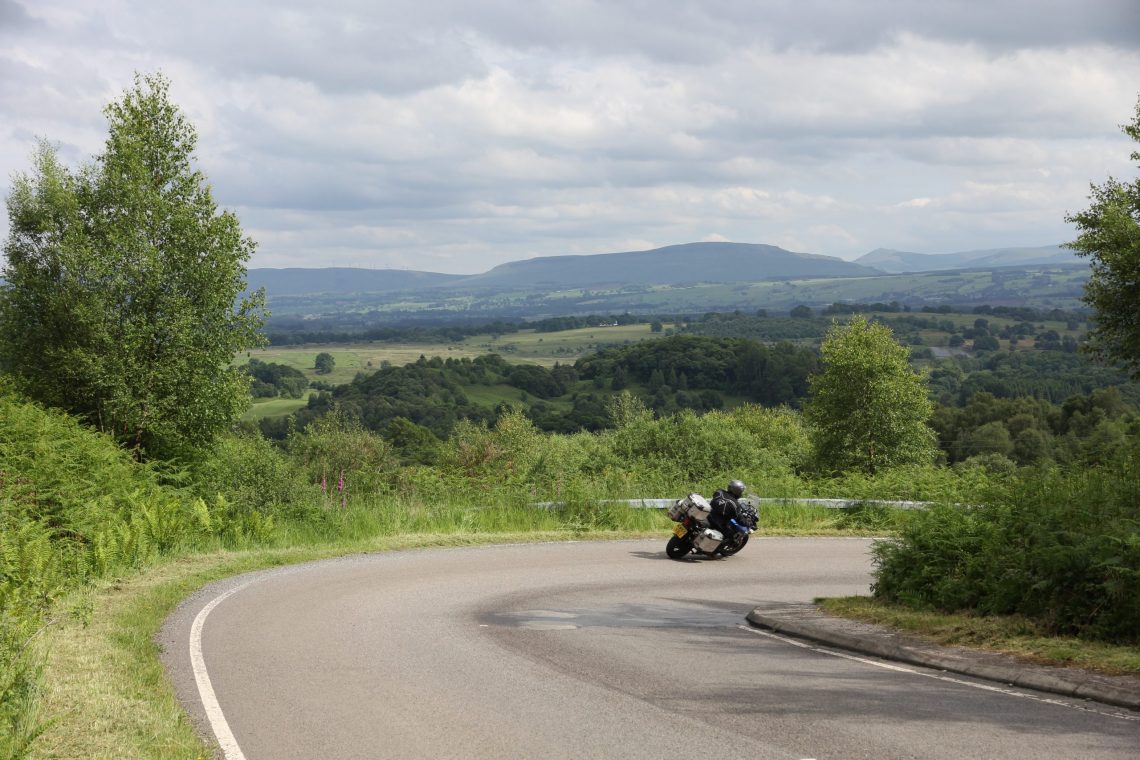 While the majority of our route sticks to the Cairngorms and the east coast, we do take a brief diversion over to the west and Loch Lomond and the Trossachs National Park.

As you enter the national park the surrounding scenery is beautiful, but as you approach the pass you’d be forgiven for thinking that you might have made a wrong turn. Built by the Duke of Montrose (hence the name Duke’s Pass) in 1885, this section of the A 821 presents a challenging and exciting ride through wooded hillsides to an altitude of 240 metres above sea level.

OK, it might not be the highest pass around, but the quality of the riding is top draw. Just be on the lookout for the occasional police car and tourist coach taking the sharp corners wide.

Plug these waypoints in to your SatNav and you can follow the route I took.