A two-day motorcycle route through the north-west of Scotland 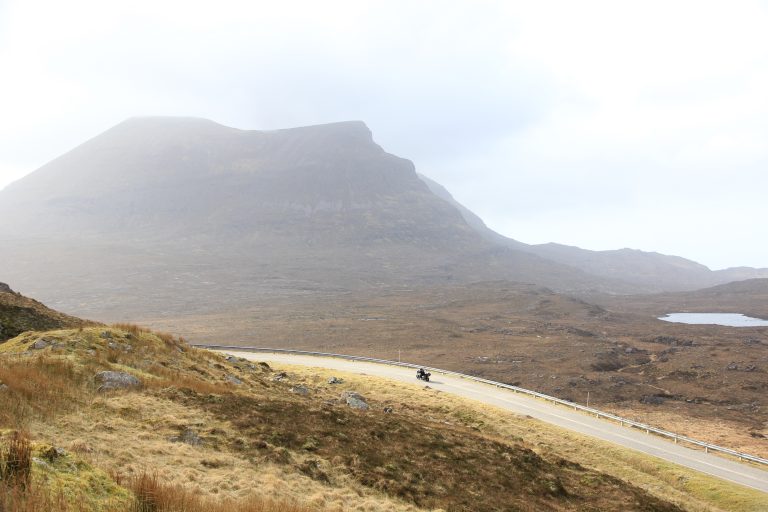 We met on an overcast day in April. I wasn’t looking for love and she was wild and untamed, but beautiful beyond all belief. On an island that’s usually so civilised she offered a sense of adventure. I didn’t want anything serious as I’m already a taken man, but on the day that the wheels of my V-Strom 650 rolled across the tarmac of the infamous Bealach na Ba, I fell head over heels in love.

Scotland was her name, and since riding this two-day route up the country’s north west coast, I find myself sitting in the office day after day, dreaming about the times spent exploring the remote valleys and wild coastlines of the country north of the wall. 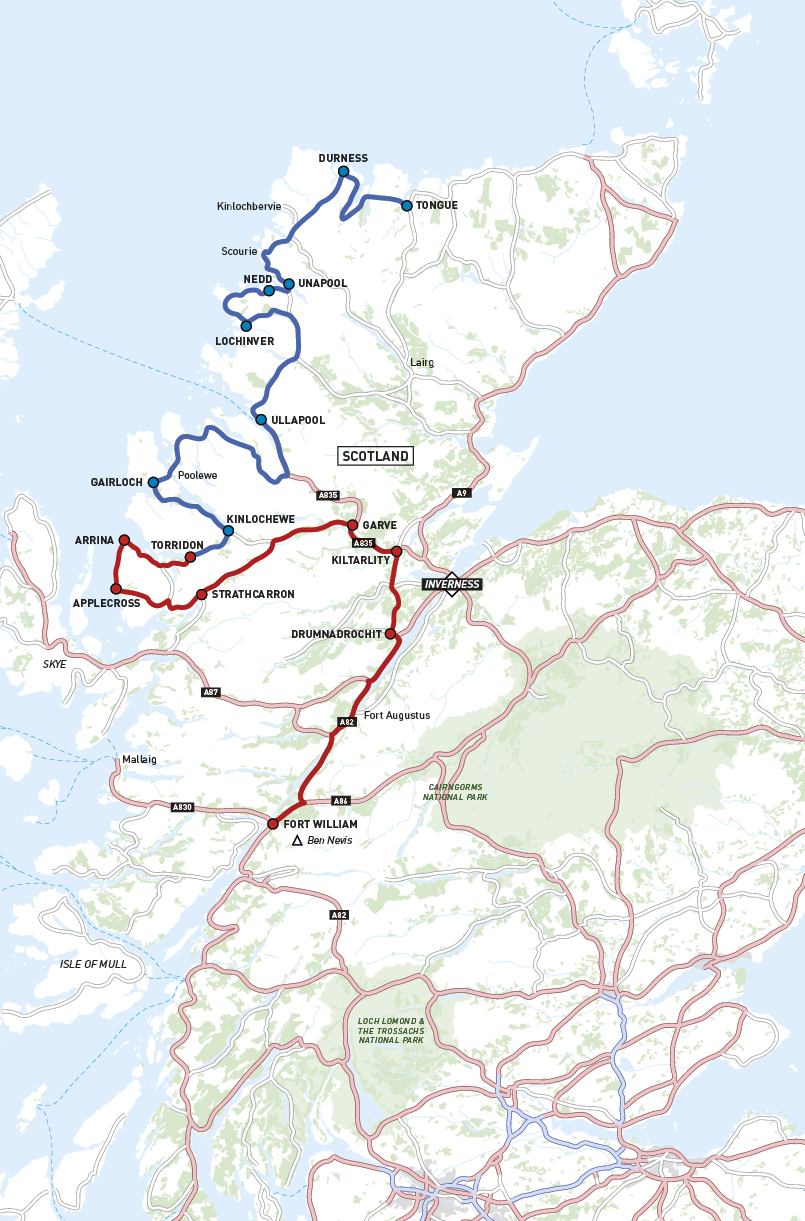 Our two-day tour begins in the outdoor capital of the UK, Fort William. For those arriving from the south, the ride from Glasgow is a beauty as you skirt Loch Lomond before cutting through the incredible Glen Coe. It’s best to stay the night in Fort William in preparation of your assault on north west Scotland, and so we found ourselves spending the night in the Alexandra Hotel.

After a hearty buffet breakfast, we set off, heading for Loch Ness. Admittedly, this first section of the ride can be frustrating as the A82 is riddled with traffic, most of it slow moving, but it’s still nice to take in the views, particularly of the UK’s highest mountain, Ben Nevis, which rises mightily on the right-hand side of the road.

As you turn left from Garve, you enter a stunning and wild valley, flanked on both sides by gently rising mountains. The road is in excellent condition, and on the Monday that we did it we enjoyed the tarmac almost to ourselves.

This section of the A832 is a great warm up for the epic mountain pass that awaits, Bealach na Ba, the Pass of the Cattle. As you approach, it’s well worth filling up in Lochcarron, where you can also get a bite to eat and a seriously indulgent cake at the Waterside Café, where Kate and Geoff will look after you. 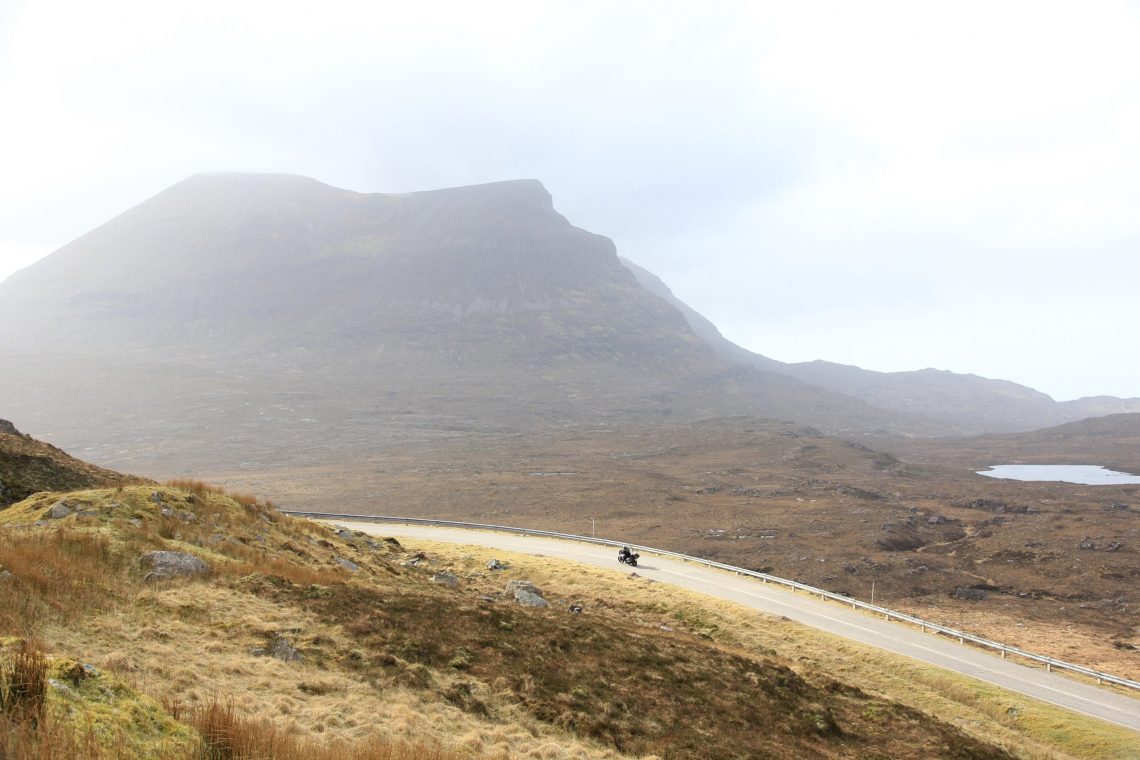 The road to Bealach na Ba is littered with reminders of how extreme the weather in Scotland can become, with signs warning of treacharous conditions in the snow, and telling certain vehicles to turn back or risk getting stranded. The pass is also exposed to the full force of winds that sweep across the peninsula, so consult local knowledge if the weather’s not looking great on your arrival.

After riding one of the UK’s most famous mountain roads you’ll find yourself deposited in the small village of Applecross. The riding from here is simply magnificent as you follow the road that hugs the coast.

I’ve run out of superlatives to describe the coastal roads north of Applecross, and so will you when you ride it. Day one finishes in the Torridon Hotel, a superb accomodation in which you’ll find a bar with over 350 whiskies, the perfect way to relax after an epic day of riding.

Day two kicks off with a bang as you begin to explore the deserted roads north of Torridon, before eventually reaching Ullapool. Grab yourself some lunch here because you’ll find it impossible to prise yourself from the saddle once you begin riding the roads to the north.

I found it hard to believe that scenery like this existed in the UK, and as we rolled into the Tongue Hotel to conclude the trip, all I wanted to do was turn back and ride it again. 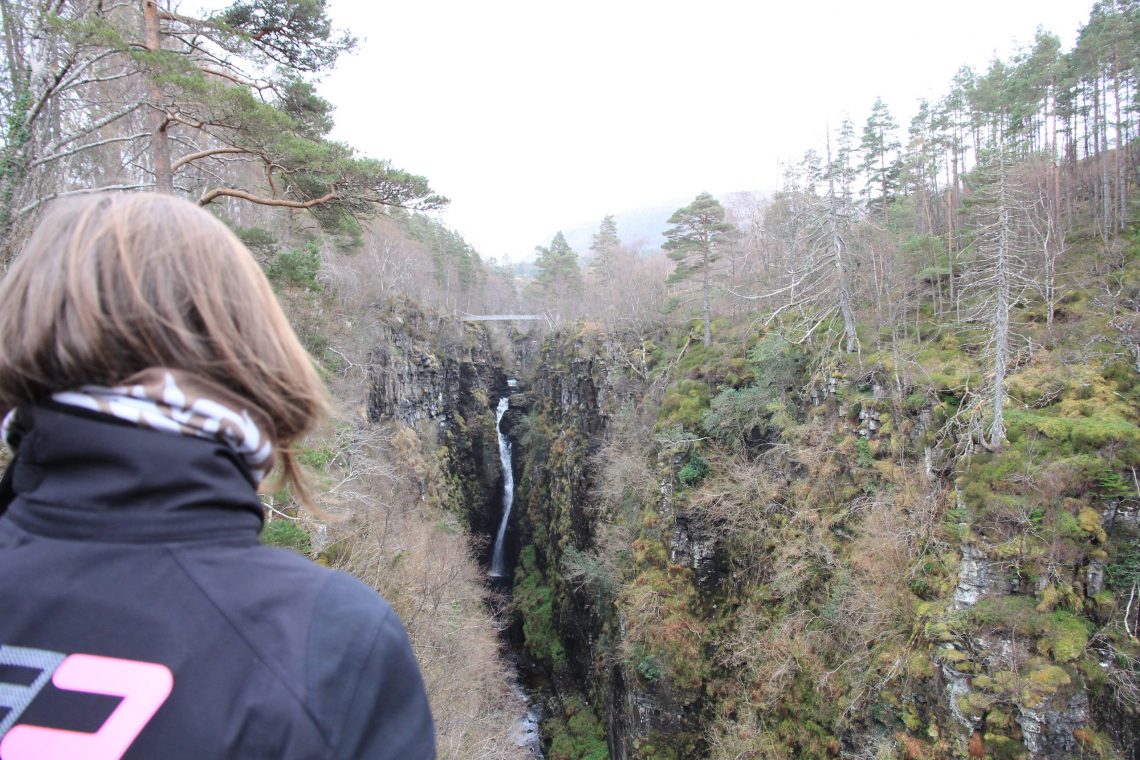 As you approach the end of the A832, having experienced the sheer beauty of the Scottish wilderness and the miles and miles of awe-inspiring nothingness, just before the junction with the A835 (which will take you to Ullapool), you’ll see signs for Corrieshalloch Gorge.

It’s a short walk down a fairly steep zig-zagging path, but the physical exertion has never been so rewarding. Almost out of nowhere a magnificent 60m-deep gorge appears, with a marvellous suspension bridge spanning its width. This incredible sight is just one of many in Scotland, but boy is it special and worth the walk. 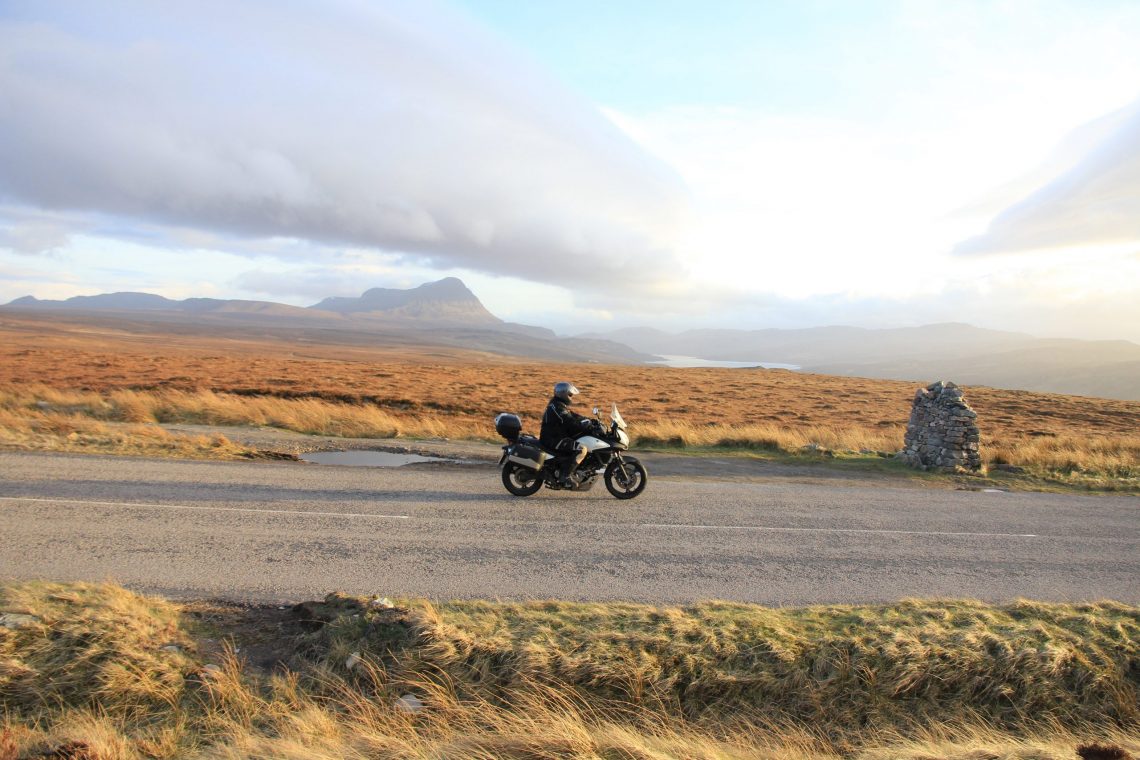 Usually we’re a bit more specific with our suggestions, but since I rode most of the way from Ullapool to Tongue at a snail’s pace as I admired the magnificent, striking scenery around me, I can’t help but recommend you make the most of the roads to the north of Ullapool.

I was so struck by the landscape that on my return from the trip, I fell short of words to describe just how incredible it is. One particular sight that shouldn’t be missed is that of Suilven, a dramatic mountain which rises imposingly out of the surrounding scenery. 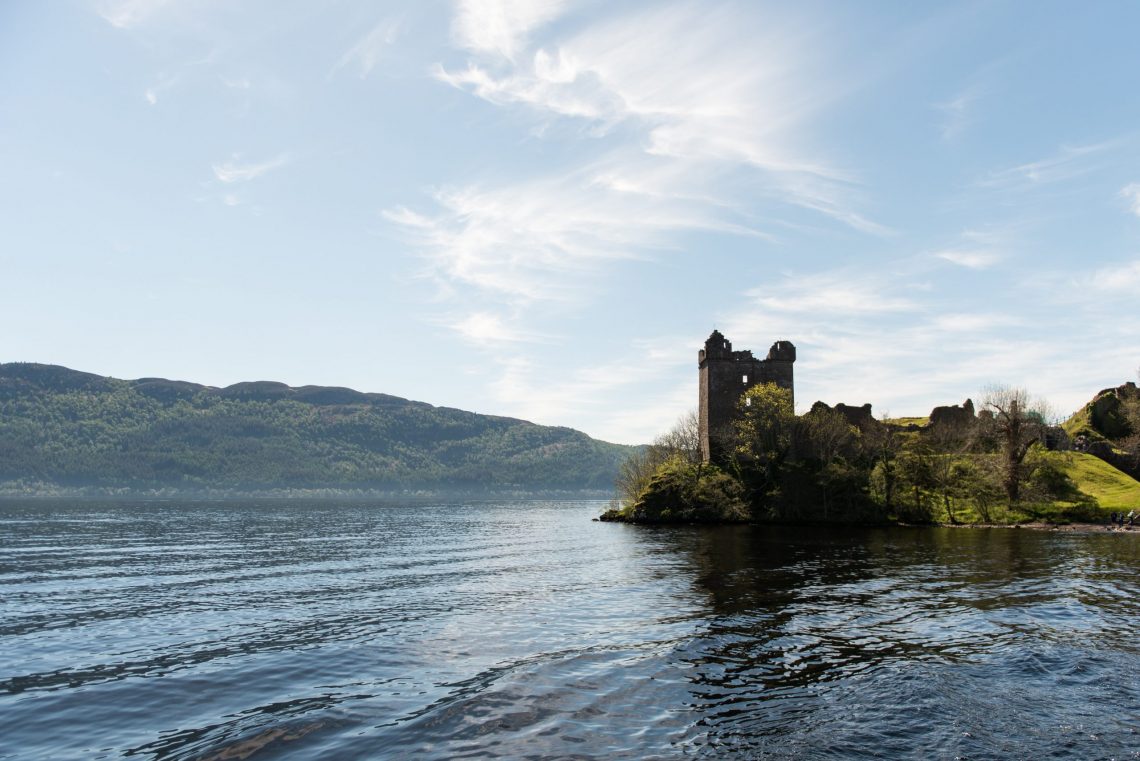 Apparently, there are at least 31,460 fresh water lochs in Scotland (yes, really). Out of these, there is but one that has achieved worldwide fame, and that’s Loch Ness. With a surface area of 22 square miles, Loch Ness is the second largest loch in the country when measured by such figures (missing out on the title to the beautiful Loch Lomond), but if measured by water volume, it’s the largest in the British Isles.

You’ll have probably heard of the loch because of the infamous Loch Ness monster which is supposed to stalk the murky waters of the lake, and there are several attractions to see along its shores that are worth a visit on your tour.

Two of which being Urquhart Castle and the Loch Ness Centre and Exhibition, where you’ll learn the fascinating history of the area. The A82 skirts the north-west coast of the lake, and if you don’t get stuck behind traffic it’s a fantastic ride. 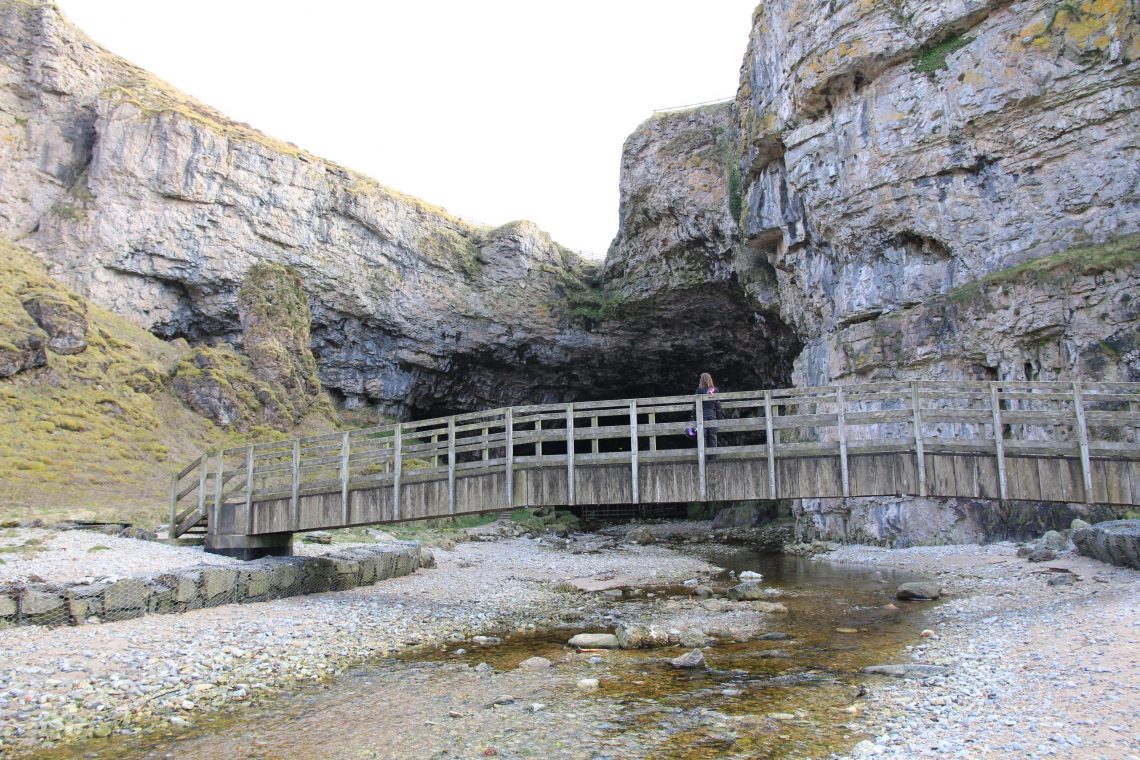 Just after Durness, you’ll see signs for Smoo Cave. These intrigued me, and so I parked up and took a short walk down the coastal path. As you reach the bottom of the cliff face, you realise that you’re standing in the mouth of a colossal cave whose entrance is 40m wide and 15m high (making it the largest sea cave entrance in Britain).

It’s well worth taking some time to explore the cavern, checking out the outer chamber and the inner chamber with its waterfall. There is also a third cavern, and this can be reached by boat when tours are running in the summer month – a great excursion to break up the biking day! 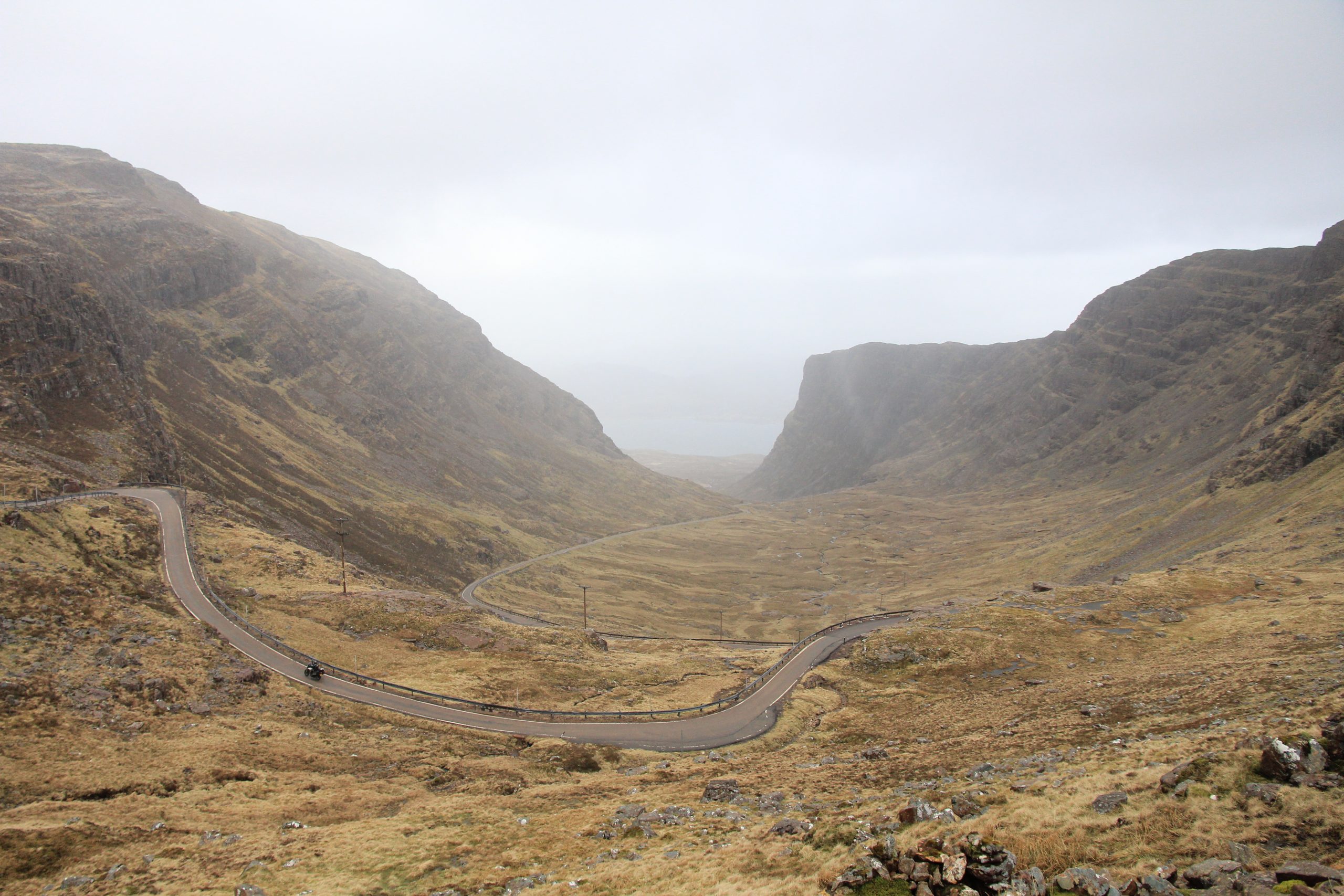 There are many, many great roads in the UK, but there are few that attract bikers in the same way that Bealach na Ba does. With the greatest ascent of any road climb in the UK (from sea level at Applecross to 626m at its summit), it’s been a Mecca for British riders for as long as two wheeled travel has been a leisurely pursuit.

On our route, the single-track mountain pass, which is also known by its English name of the Pass of the Cattle, is approached from the east, just after passing through Lochcarron. From here the road slowly climbs, allowing the views to stretch further and further into the distance with each metre that you climb.

Before long, you reach the epic series of steep switchbacks which are as close to an alpine mountain pass as you’ll get in the UK. Once at the top, savour the incredible views of the Cuillin Hills in Skye, and enjoy the great ride down to Applecross. 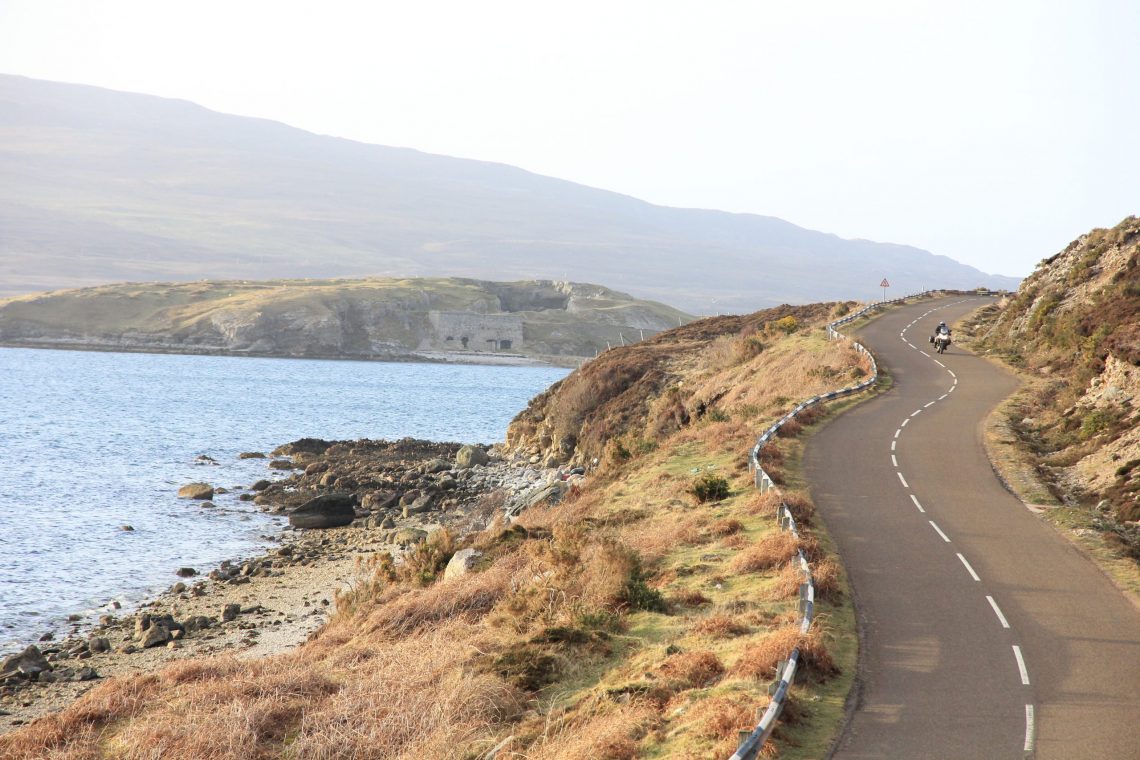 It may feel like I’m being indecisive by offering up such a vague road to ride, but trust me, anything north of Applecross on this tour will have you smiling from ear to ear. A mixture of single track lanes and perfectly laid roads make the routes along the north west coast a delight to ride.

As you reach Ullapool it’s worth taking a stop for lunch, and to also prepare yourself for the sheer beauty of the scenery that you’re about to travel through. It’s as wild as you’ll get in the UK here, and if you avoid peak holiday times the roads are all but empty, and I have never ridden on so many great roads in one area.

Enter the following waypoints in your SatNav and you’ll follow, as near as dammit, this ABR motorcycle route through Scotland.