The Two Moors Way: A motorcycle route of discovery from Exmoor to Dartmoor 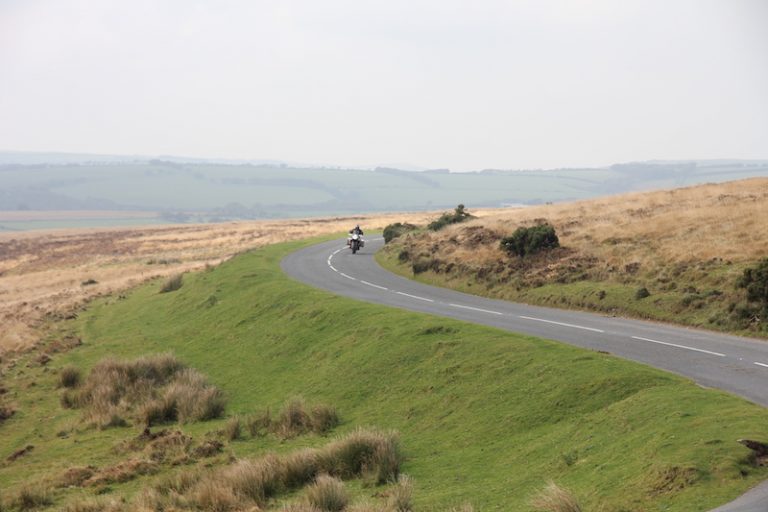 Over the past few years we’ve been fortunate enough to explore most of Great Britain from the saddle of a motorcycle. We circumnavigated the island in our recent Discover Britain series, and in every issue of ABR magazine we follow one of the many long distance footpaths that run through England, Wales and Scotland, such as the Peakland Way. Suffice to say, I’ve seen a lot of the place, and while the expression ‘familiarity breeds contempt’ is often true, when it comes to riding in Britain, it couldn’t be more wrong. So with this in mind, we returned to Devon to ride the Two Moors Way.

Having ridden the roads of the English county many times before, most recently on our South West Coast weekender, and while following the Coleridge Way, our reason for visiting on this occasion was to ride a 90-mile long footpath that takes you from coast to coast, over the desolate, bleak landscapes of Exmoor and Dartmoor.

The Two Moors Way originally begins in the pretty seaside village of Lynmouth, from where it heads south into Exmoor, but I decided to make a bit of a change to include a stretch of road that firmly holds a place in my top five roads in the UK, the A39 between Porlock and Lynmouth. With this in mind, we begin the 97-mile long journey at the foot of Porlock Hill, a section of road that claims the title of Britain’s steepest A road, with inclines reaching 25% in places. 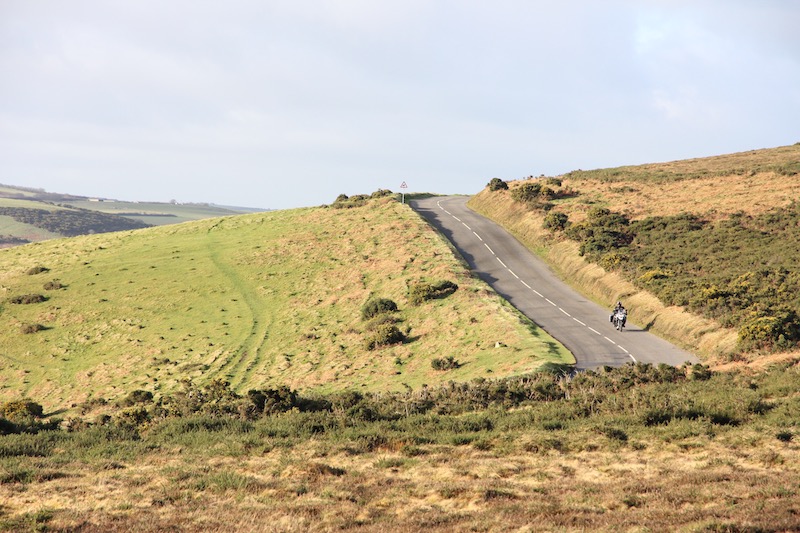 The road from Porlock to Lynton

From here, the A39 hugs the Devonshire coastline, snaking as it mimics the indents of the small coves and beaches below. I’m always torn when I ride here as it’s tempting to open up the throttle and enjoy the rollercoaster ride of the tarmac, but by doing this you starve yourself of soaking in the magnificent landscape of Exmoor. To the left of you are impressively deep valleys, and to the right rugged cliffs of the Heritage Coast.

The thrilling opening act of the Two Moors Way concludes with a spectacular descent of Contisbury Hill, taking you into Lynmouth. From this quaint but touristy village, we cut into the moors via Watersmeet Road which follows the East Lyn River through the deep, wooded and magnificent East Lyn Valley. Small cliffs rise from the side of the road as it follows the valley wall, and it’s rides like this that make you smile from ear to ear. 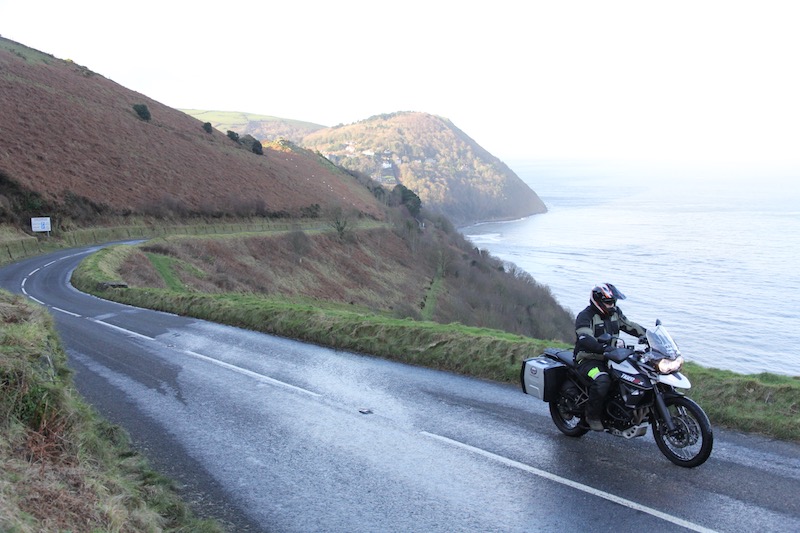 Contisbury Hill with Lynton and Lynmouth in the distance

The road continues on, becoming the B3223 as you take a left in Hillsford Bridge and you begin a short ascent onto the moors. Crossing Exmoor here, you really get a sense of just how exposed they are, and if you’re doing this ride in bad weather you’ll certainly feel how they bear the brunt of the elements, though the views are incredible as you ride past wild Exmoor ponies. Our route takes you briefly into the small settlement of Simonstown before continuing south and eventually to moor number two, Dartmoor.

While the moors are without a doubt the stars of the show that is the Two Moors Way, the supporting cast, made up of an intricate network of singletrack lanes and forgotten B roads in between, provides some excellent slow-paced riding. It’s here that you can just let your mind wonder as you pass through the cottage-lined streets of tiny hamlets, beautiful rolling green hills and countryside so perfect that you’ll want to up and move house on your return home. 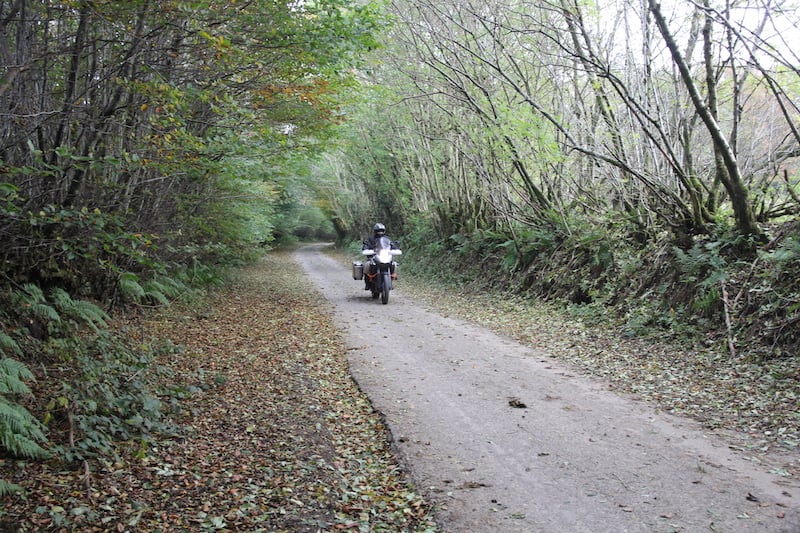 As you pass through Morchard Bishop you’ll begin your approach to Dartmoor, though you may have noticed that the route so far has not passed a single petrol station. So, if you’re in need of fuel it’s worth taking a little detour to Crediton where you’ll find a Shell garage in the centre of town on Exeter Road. Continue onto Moretonhampstead, the gateway to Dartmoor for a showstopping finale.

There’s something about Britain’s moorlands that enables them to capture my imagination like no other place I’ve visited. They’re wild, untamed and harsh places that you would never think existed on this small, placid island of ours. If you think the UK is becoming overcrowded then get out of the city and head on to the moors, here you’ll gain a different perspective, especially as you roll out of Moretonhampstead over the cattle grid and onto Dartmoor. 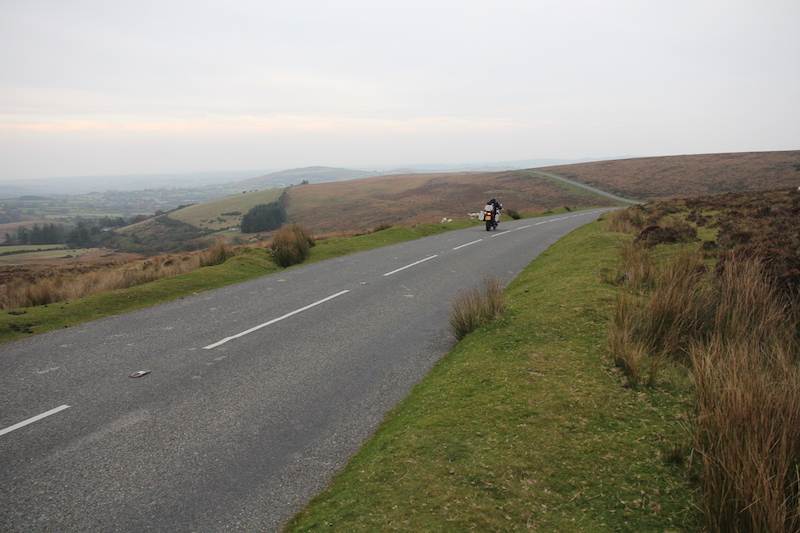 Like the exceptional A39 that’ll call to you like a siren the next time you ride in Devon, the B3212 across Dartmoor is a sensational road. Though the posted speed limit is 40mph throughout the moors (due to the risk of animals wondering on to the road), this doesn’t detract from the overall quality of the riding, and the views from here are as good as anywhere in the UK.

Our initial forray into Dartmoor National Park takes us to Princetown, one of the highest settlements in the UK, and also the site of the infamous Dartmoor Prison. Here, if you’ve got enough time, I’d thoroughly recommend visiting the fascinating Dartmoor Prison Museum which displays the intriguing history of the place, as well as a gruesome collection of confiscated weapons made by inmates throughout the years.

Your experience on Dartmoor will largely be dictated by the weather. The place sees more rainfall than the surrounding areas, and when the weather gets bad the place becomes enshrouded in an eerie, atmospheric aura.

We finish our ride at the southern tip of Dartmoor National Park, in the small town of Ivybridge, named after the small, 13th century hump-backed bridge that was once the only means of crossing the River Erme. No doubt you’ll be tired by this point, so check yourself in to one of the many hotels around the town. Ivybridge is perfectly located on the A38, so you can hop on that to reach the M5 and then home. 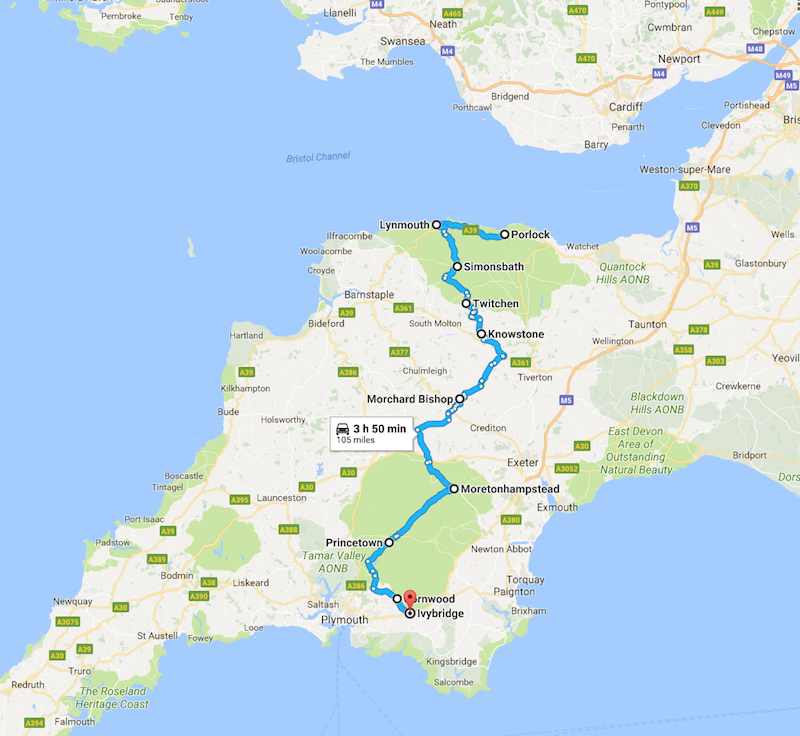 Stick the following waypoints in your SatNav and you’ll follow, as near as dammit, the Two Moors Way Route: