5 reasons to ride the Peakland Way 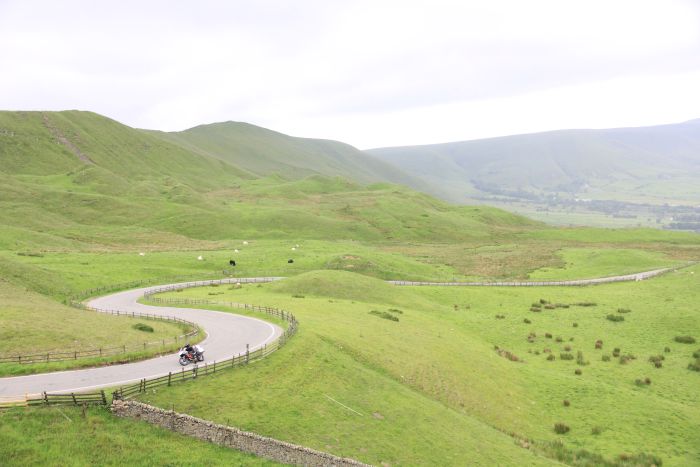 In each issue of Adventure Bike Rider magazine we set out to ride one of the UK’s long distance footpaths by motorcycle. Of course, we can’t literally ride on the paths (with the exception of the first half of the Ridgeway), so we plot our route to follow as closely to the original trail as possible.

In issue 35 of Adventure Bike Rider we took a journey along the 120-mile long Peakland Way, a fantastic ride that takes you on a tour of the beautiful Peak District, circumnavigating the national park and taking in all of the best roads and attractions that it has to offer.

Following the Peakland Way is a great way to spend a day, so if you decide that you’re looking for a route to tick off this weekend, it’s well worth considering. To help you make up your mind, here are five things to see and ride a long the Peakland Way. 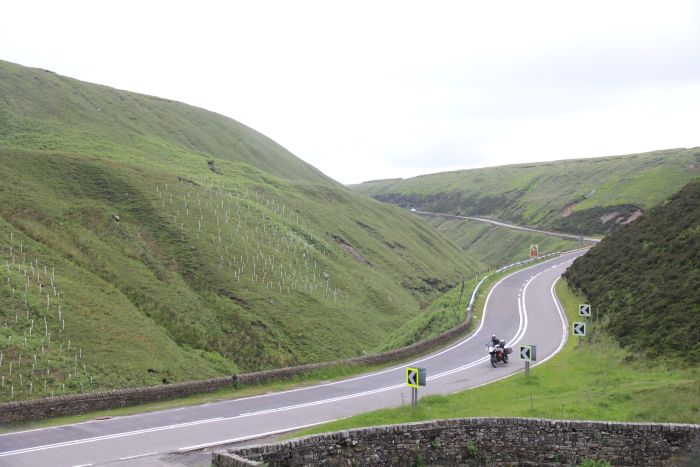 Snake Pass is widely regarded as one of the best roads in the UK, and for good reason. You’d be hard pushed to find another 13-mile stretch of tarmac that offers such a thrilling ride, and the scenery makes the journey just that little bit more special.

Starting on the shores of Derwent Water and finishing in Glossop, the road takes you through beautiful countryside, stunning valleys and over bleak moorland, twisting and turning as it goes. Beware of speed traps while riding, and keep in mind that the pass can get pretty busy on weekends. 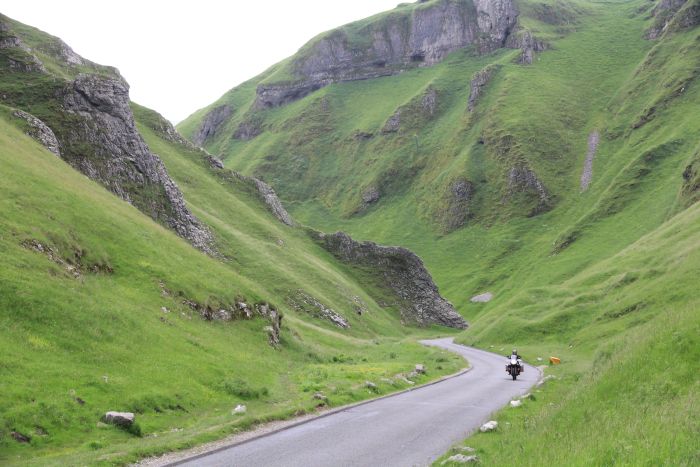 While the road through Winnats Pass is only a short ride, it’s pretty spectacular. The tarmac cuts a line through the floor of a gorge that rises on either side of you in the form of steep limestone cliffs.

Riding through Winnats Pass is like taking a journey into another world, and despite the road being heavily trafficked it’s hard not to lose yourself in the atmosphere of the place. Rumour has it that the pass is haunted by a young couple who were murdered by miners, adding to the eerie feeling of the place. 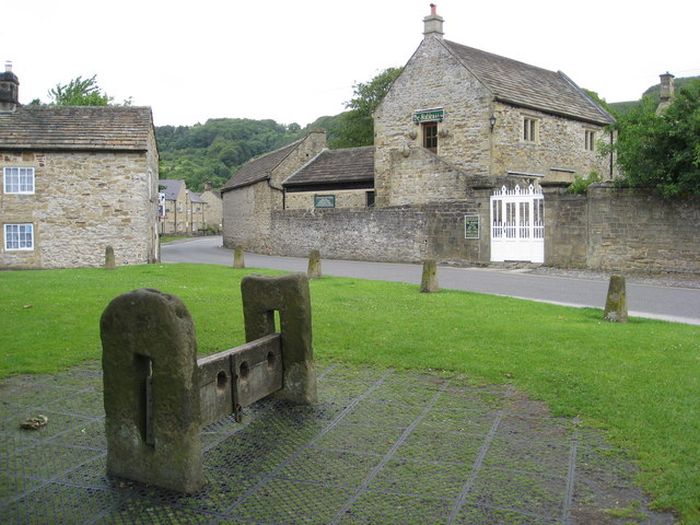 One of the best things about riding in the UK is the amount of historical landmarks you’ll pass. On the Peakland Way one of the most interesting sights is that of Eyam Plague Village.

Back in 1665, when the bubonic plague was running riot across Europe, villagers in Eyam chose to isolate themselves from the rest of the country rather than risk infecting anyone else, setting up a quarantine in the village. The boundaries which marked where people could not enter can still be seen today. 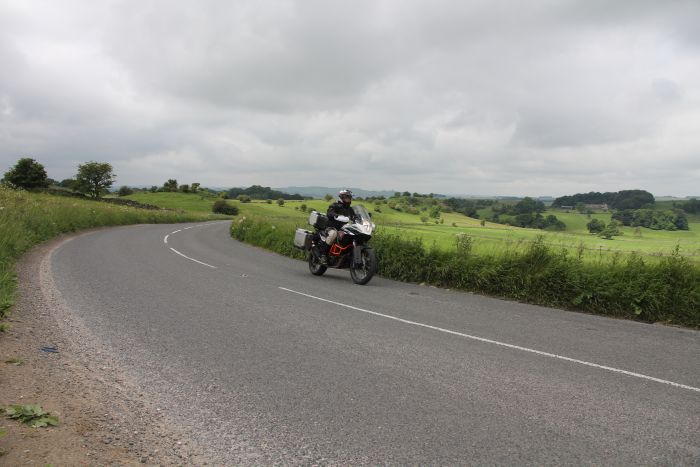 Whoever designed the roads in the Peak District must have been a biker. It seems to be that no matter which direction you head in, you’ll be riding a road that excites and enthuses anyone on two wheels. The B5056 is one such stretch of tarmac, and if you follow our route you’ll be treated to this glorious road just over a mile after starting the journey.

With a mixture of long, sweeping bends and shorter, more intense turns that demand more from you and the bike you’ll be wanting to turn back and do it again and again. 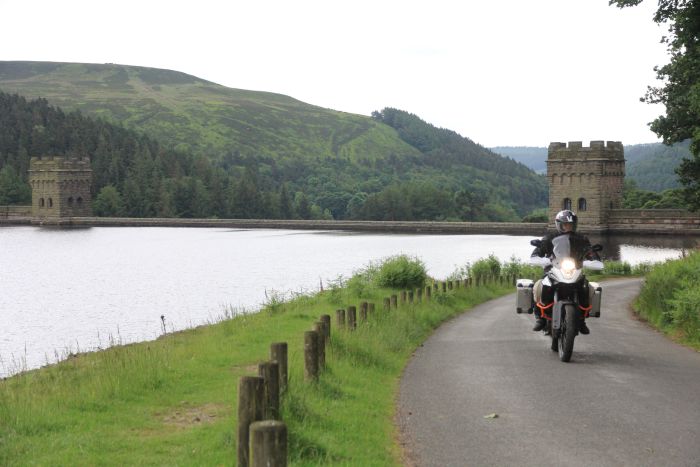 Just before you roll onto Snake Pass, take the time to take a detour of the gravel road that skirts the shores of Derwent Water. You’ll reach a dead end after a few miles, but the place is simply incredible, and what makes it even more special is the fact that it’s where the 617 Squadron practised their low-level flying for their Dam Buster raids in Nazi Germany during World War Two. 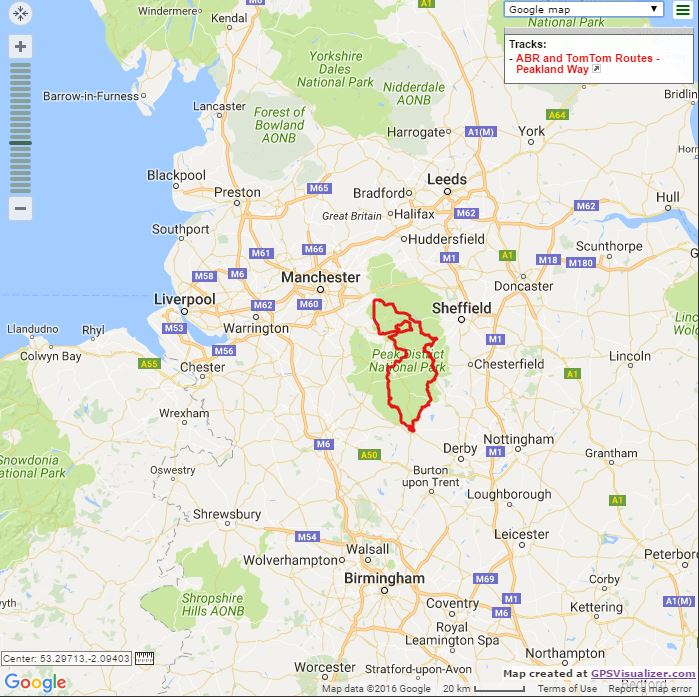 If you want to ride the Peakland Way then we’ve plotted out the route in a gpx. file so that you can download it and stick it straight in your SatNav. Simply follow this link to download the file and for instructions on how to use it.