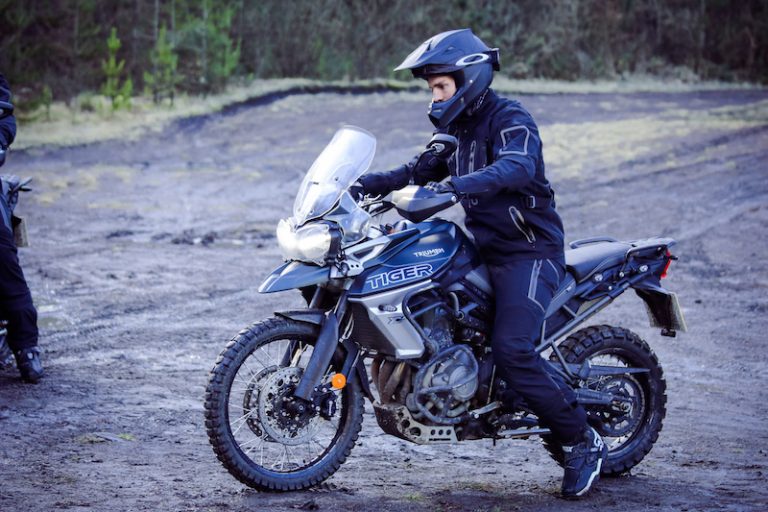 Ahead of the Six Nations, Wales rugby star George North swapped the playing field for the trails when he visited Triumph’s Adventure Riding Experience with English pundit David Flatman.

The pair stoked the flames of rivalry before the Wales vs. England Six Nations game on Saturday, by going head-to-head in a series of off-road challenges on two Triumph Tiger 800s.

The challenges included tackling a slow-speed riding course, momentum techniques, and learning to pick up a bike correctly.

Despite finishing in second place, David Flatman left with his head held high, having only recently passed his motorcycle test.

After a day on the bikes, George and David discussed the Six Nations and some of the matches that George will face throughout the tournament.

Speaking about competition within the Wales squad, George said: “It’s definitely made training a lot more competitive. You know that if at any one point you’re not performing as you should do, then you know your shirt is gone.

“Every day you’re fighting for a jersey, fighting for a position. For us, that’s great. It develops that extra level of skill within us because you know that if you’re not on it then you’ll be dropped.”

For their off-road training, George and David travelled to the Brecon Beacons in South Wales where Triumph runs its Adventure Riding Experience. The British bike manufacturer offers training for all abilities from complete beginners to advanced off-roaders.

Riders have the chance to ride Triumph Tiger 800 and 1200 adventure bikes, as well as Bonneville Street Scramblers, in a variety of environments including rocks, hills, gravel and woodland, under the tuition of an experienced team of instructors.