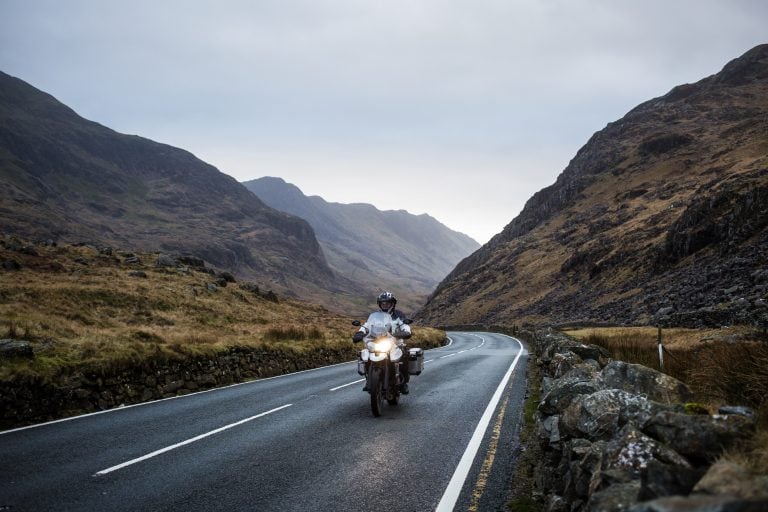 Throughout 2020, we’ll be bringing you a series of stunning rides across the UK and Ireland as part of the TomTom Amazing Britain series. It goes without saying the resulting routes will feature plenty of superb roads through breath-taking landscapes, but we’ll also be hunting out fascinating, quirky, awe-inspiring and sometimes downright ridiculous places for you to stop and explore along the way.

For the latest TomTom Amazing Britain Route, I headed to Wales and plotted a 240-mile route loop through the north of Cymru, starting at the seaside town of Llandudno.

I then travelled clockwise around the north west of the country, over the desolate yet beautiful Denbigh Moors before stopping at the highest waterfall in Wales. The route then turned east through the magnificent Snowdonia National Park, all the way to Hell’s Mouth Bay on the east coast.

Heading back inland, I dipped back into the national park to ride the famous Pen-y-Pass, taking in views of Wales’ highest mountain, Snowdon, as I rode. The route then took me along the scenic A5 past the distinctly shaped Tryfan mountain and along the north coast back to our starting point at Llandudno.

This TomTom Amazing Britain route can be tackled in a day, but the twisting nature of the roads will make it a long one. If you want to spend some time exploring the stops along the way, split it into two days and make a weekend of it. Let’s get going!

1. Spot a UFO on the Great Orme 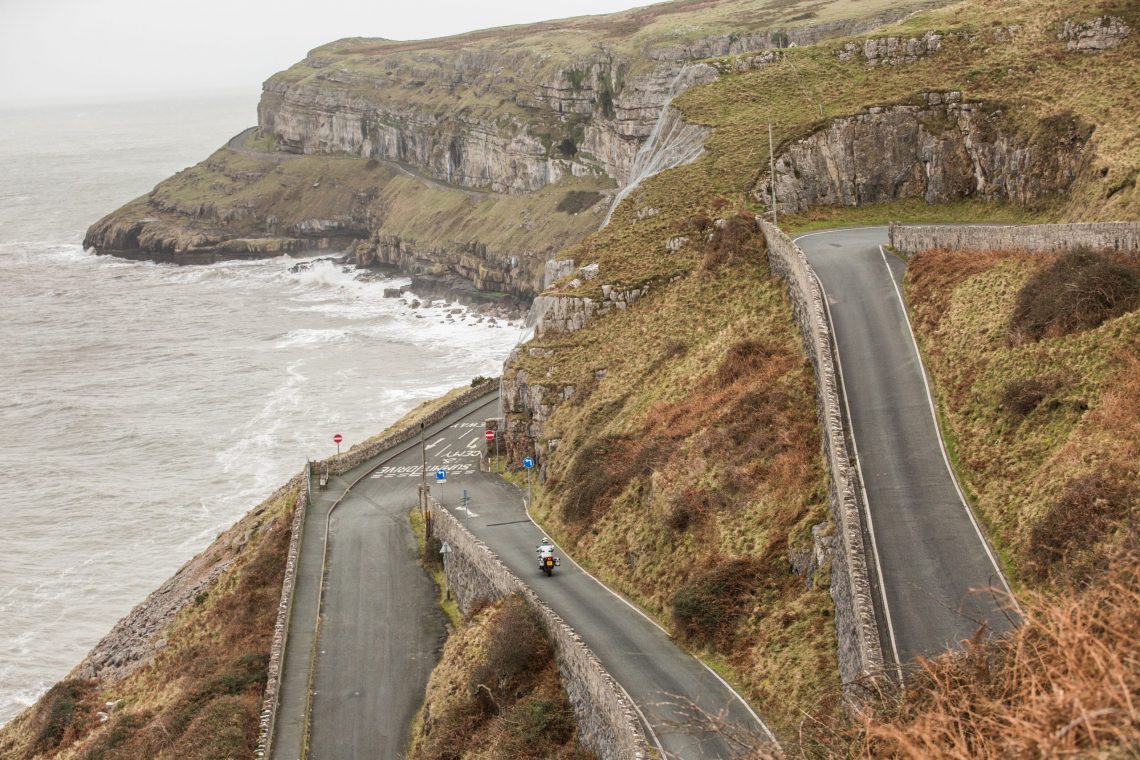 The route starts as we mean to go on at the Great Orme, a limestone headland that towers above the seaside resort of Llandudno. It’s an impressive sight but the true joy for us bikers is the twisting road (Marine Drive) that circles the headland, clinging to its edge like a balcony road you might find in the south of France.

Once you’ve looped the Great Orme, make sure you ride to the top via St Tudno’s Road, which features three switchbacks as it snakes its way upwards. Once at the summit carpark, check out the visitor centre to find out about the geology and history of this natural wonder.

Unfortunately, I arrived before it opened, but I’m told that a room in the visitor centre is dedicated to UFO sightings, with this area of North Wales known to be a hotspot for extra-terrestrial activity, or so some people say. 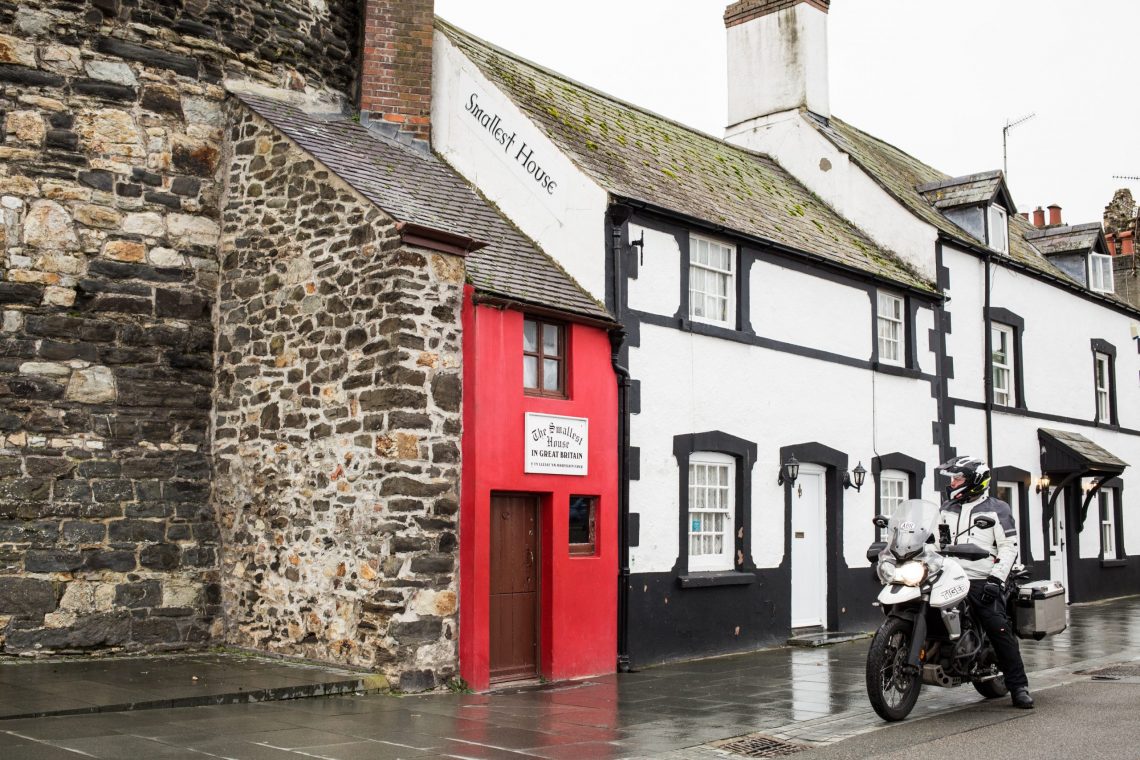 Head south for five miles through Llandudno and across the River Conwy and you’ll find yourself at Quay House, which is the smallest house in Britain, located on Conwy’s quayside. It measures just 6ft across, 10.1ft high, and 10ft deep. The building was occupied up until 1900 when it was declared unfit for habitation.

The last tenant was fisherman Robert Jones who, at 6ft 3ins tall, was too tall to stand up inside. These days, curious visitors can tour the tiny dwelling for just £1 to discover what life was like living in Britain’s smallest house. The house is currently closed for winter and reopens in late March.

3. Explore the medieval fortress that is Conwy Castle 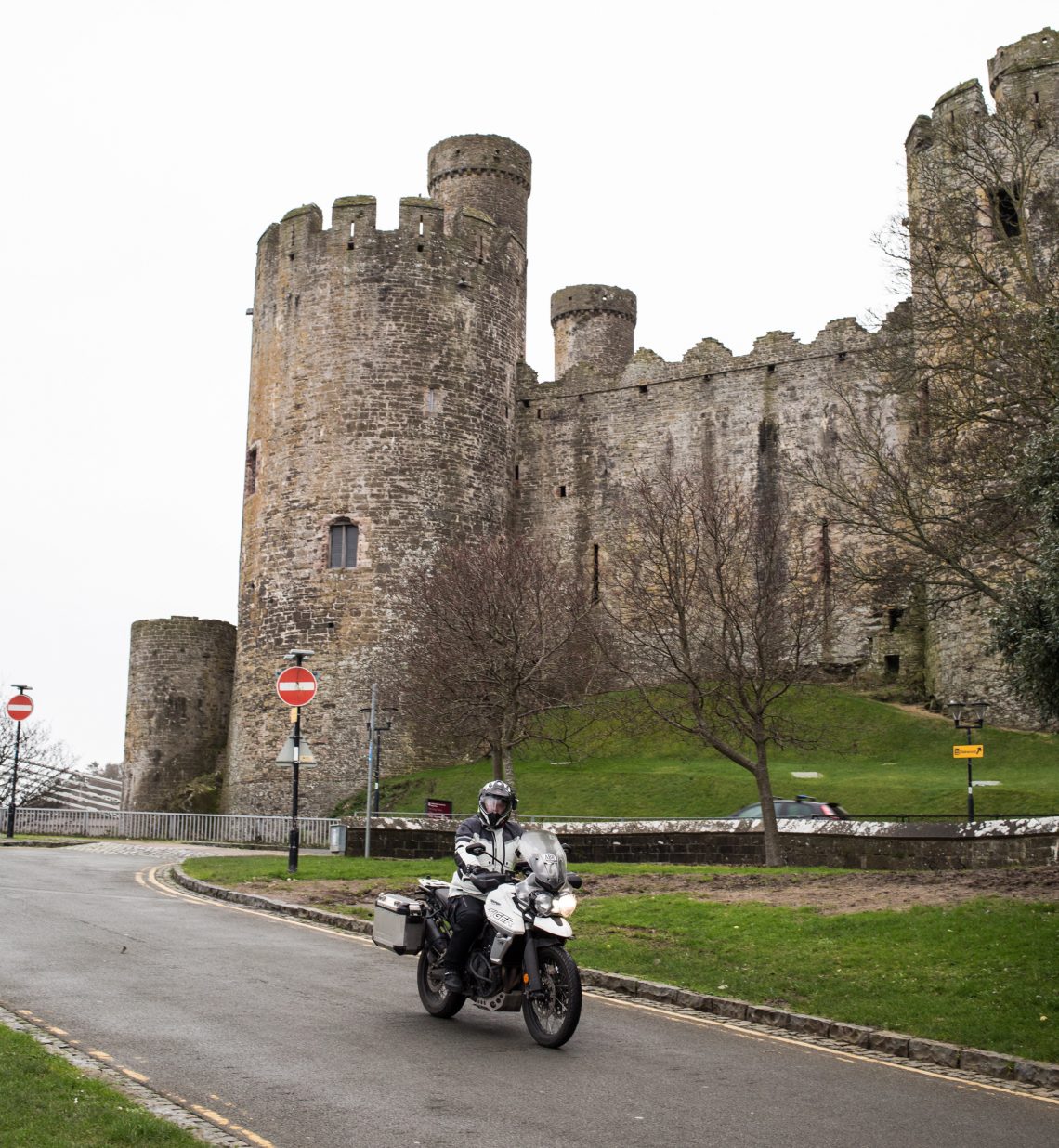 The next stop on our route is just a stone’s throw away from Quay House. It took just four years to build Conwy Castle between 1283 and 1287, which seems an incredible feat, especially when you see this impressive medieval fortress up close.

The castle was built for Edward I at a cost of £15,000 which was a fortune in the 13th Century. However, despite the cost and the grandeur of the building, the King only stayed there one night when he was trapped by a Welsh rebellion, although he did have a barrel of wine for comfort. The castle is open to visitors and, if you have time, I’d recommend exploring this medieval marvel.

4. An anicent tree older than the Pyramids of Giza 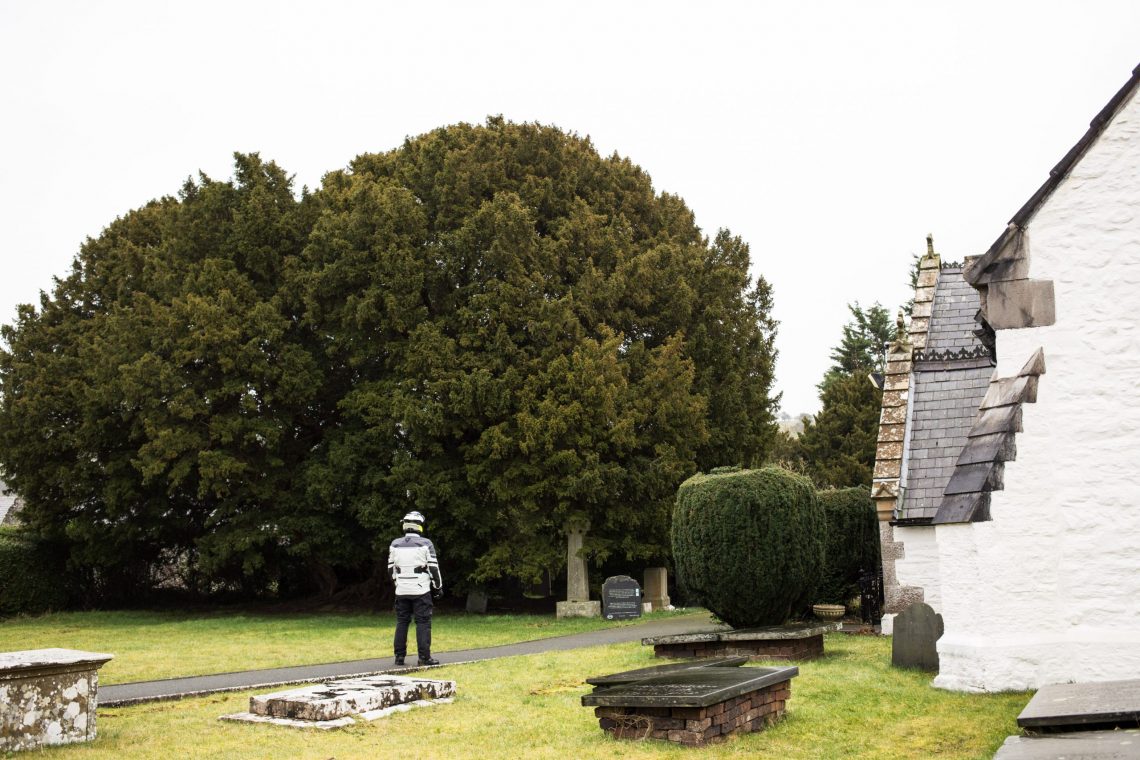 From Conwy Castle, the route heads back across the River Conwy and onto the North Wales Express Way for half a mile, before turning onto the B5381 and climbing upwards. The route then winds its away over rolling hills before stopping at the village of Llangernyw.

Stood in the churchyard of St Digain’s Church is an ancient yew tree estimated to be between 4,000 and 5,000 years old, making it one of the oldest trees in Britain. The yew is an unassuming sight that could easily be overlooked, but it’s worth taking a few moments to stand next to its trunk and reflect on the history it has lived through.

For example, the Llangernyw Yew may well have begun life before the Pyramids of Giza were built and it has lived through events including the birth of Christ, the Roman invasion of Britain and the creation of the Magna Carta, to name but a few.

5. Marvel at the sight of Pistyll Rhaeadr, one of the highest waterfalls in Wales 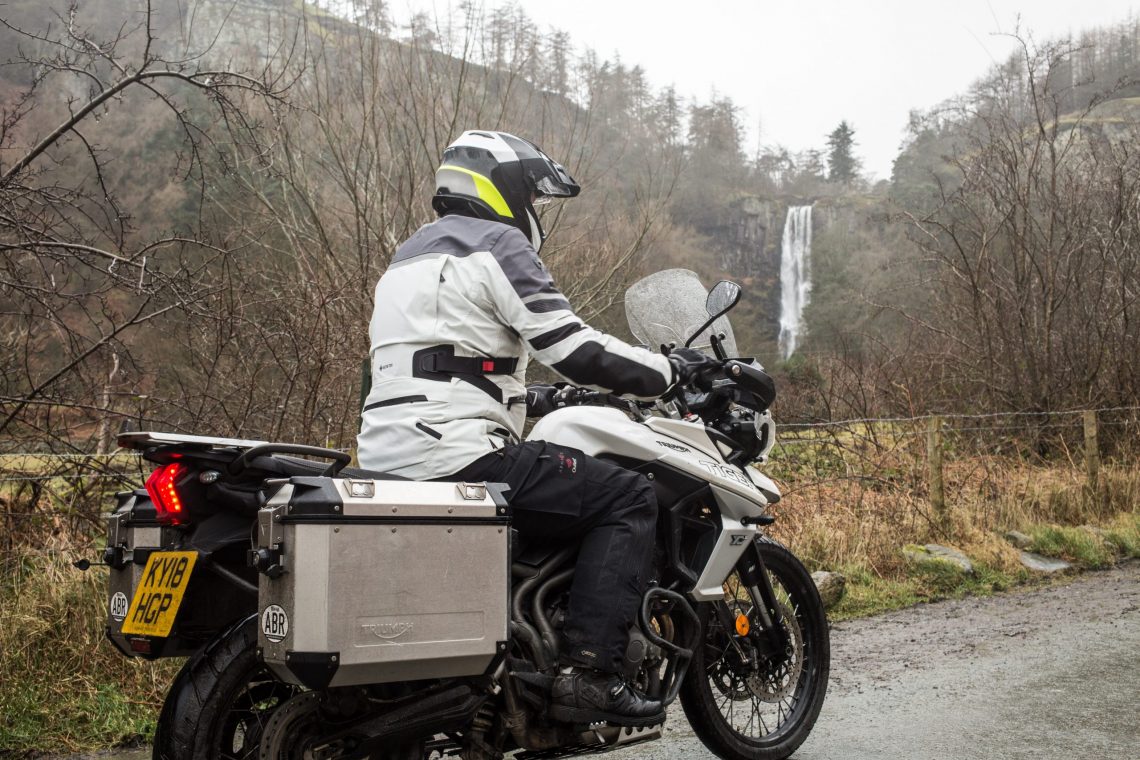 The superb riding continues as we head south, skirting the tranquil waters of Llyn Brenig reservoir in the Denbigh Moors, before even more quiet, twisting roads take us to the highest waterfall in Wales. Pistyll Rhaeadr is located about four miles from the village of Llanrhaeadr-ym-Mochnant at the end of a narrow curving road that follows the meandering path of the River Rhaeadr.

When you reach the end of the road, you’ll be greeted with the sight of Pistyll Rhaeadr in all its glory. The waterfall stands 73m tall amid lush-green vegetation. If you’re feeling energetic you can walk to the top, or simply enjoy a cuppa and a slice of cake at the tearoom nestled near the foot of the falls.

6. Walk in the footsteps of the Men of Harlech 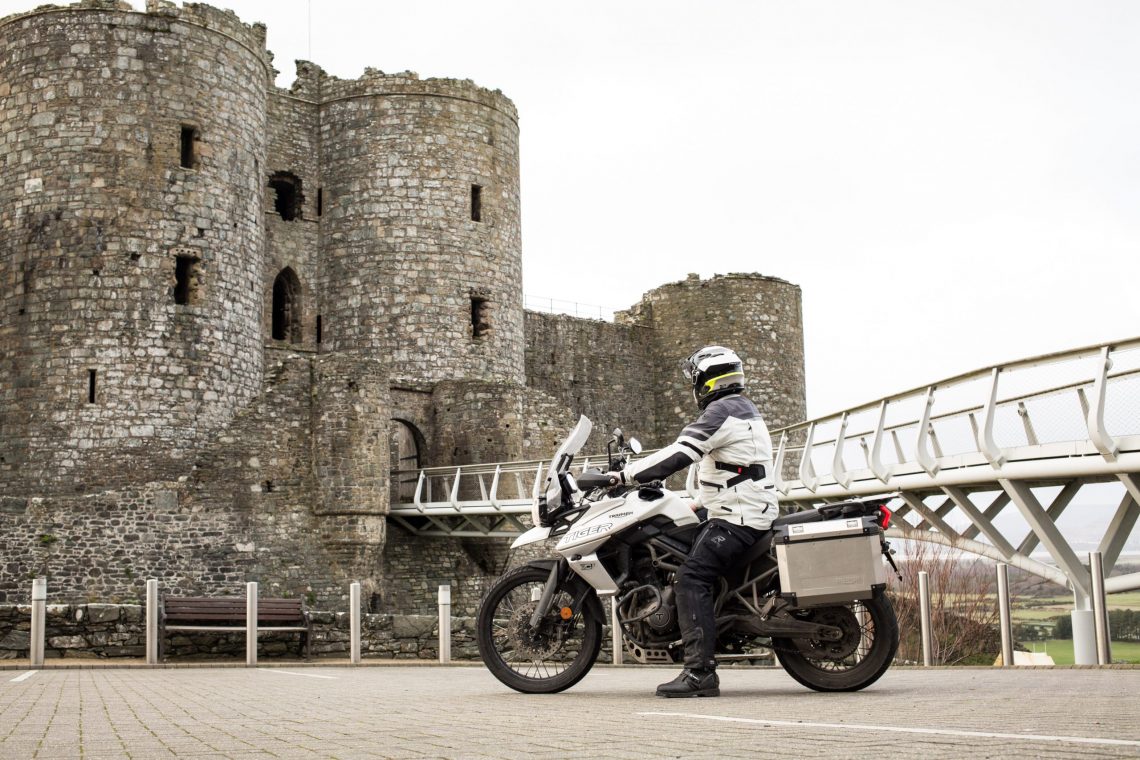 From Pistyll Rhaeadr we turn west to cut a path across the spectacular Snowdonia National Park. The riding gets even better from here as twisting roads rise and fall across the Welsh landscape before we reach Harlech Castle on the west coast

If you’ve ever had the pleasure of attending a Cardiff City football match, you’ll have heard the home crowd belting a rendition of Men of Harlech, the rousing song known as Wales’ alternative national anthem. The inspiration for the song were the men who defended Harlech Castle during a seven-year siege during the War of the Roses.

Despite finally succumbing to their attackers in 1468, their strength of resolve lives on in this famous Welsh song. These days you can visit the magnificent castle they defended, which is perched atop a rock overlooking the town of the same name.

7. Visit the sailors’ nightmare that is Hell’s Mouth 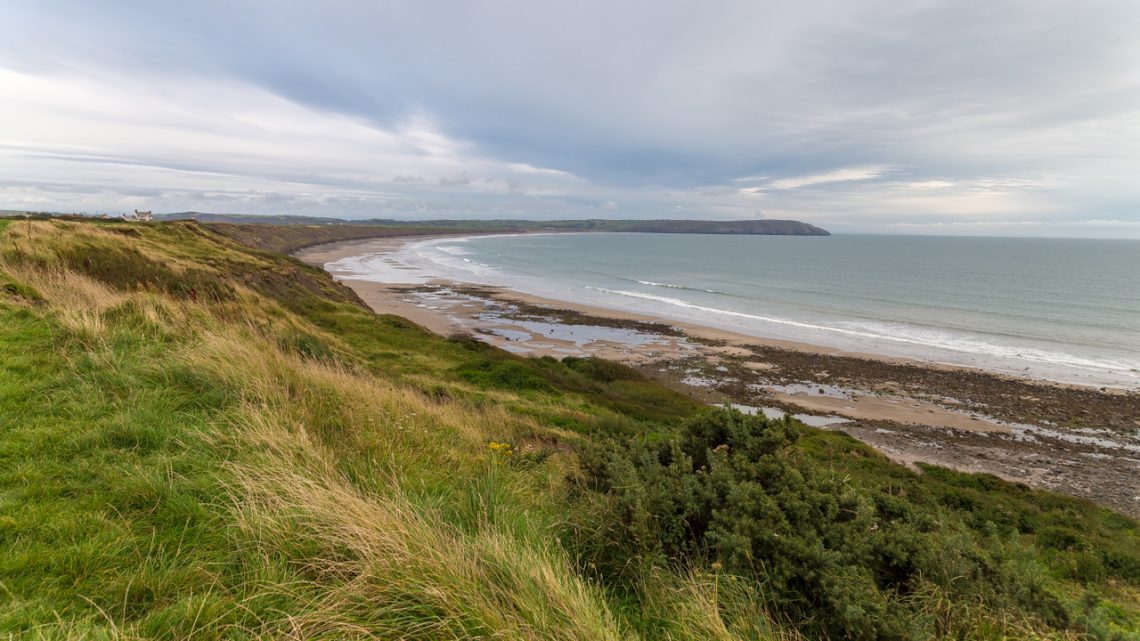 We stay close to the coast for the next section of our route as we explore the picturesque Llyn Peninsula which juts out into the Irish Sea. Our destination is Porth Neigwl, also known as Hell’s Mouth. This sandy bay stretches for three miles and is the perfect spot to stretch your legs. The bay may be beautiful, but Hell’s Mouth is known by its name for good reason. A combination of savage winds and jagged rocks has led to around 30 ships being wrecked in, or very close to, the bay, with countless sailors losing their lives. Once you’ve breathed in enough sea air, we ride across the Llyn Peninsula on quiet B-roads before dropping back into Snowdonia National Park.

8. Ride alongside Snowdon over Pen-y-Pass 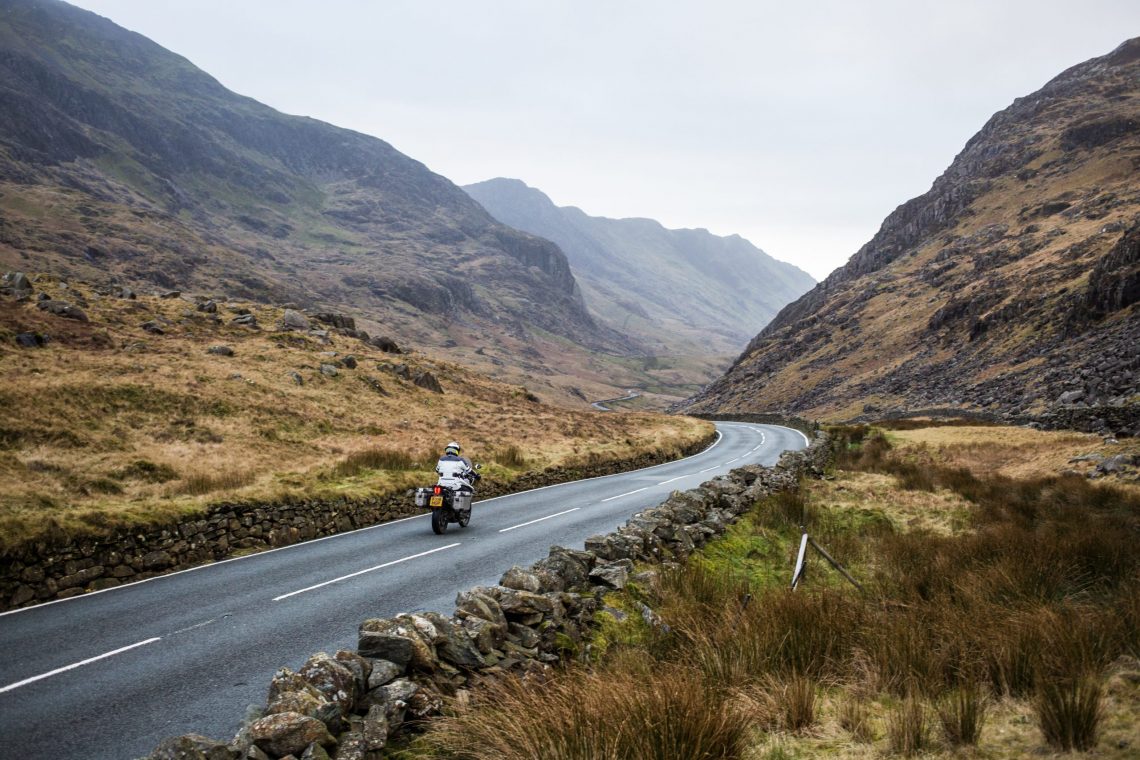 One of my favourite views in the world is from the top of Pen-y-Pass where you can watch the A4086 wind its way along a mountainous valley floor landscape the town of Llanberis. The only thing better than soaking up this view is jumping on a motorcycle and becoming part of it. Our route takes us along this magnificent road to the foot of Snowdon and I admit that, despite fading light, I turned around and rode it twice. 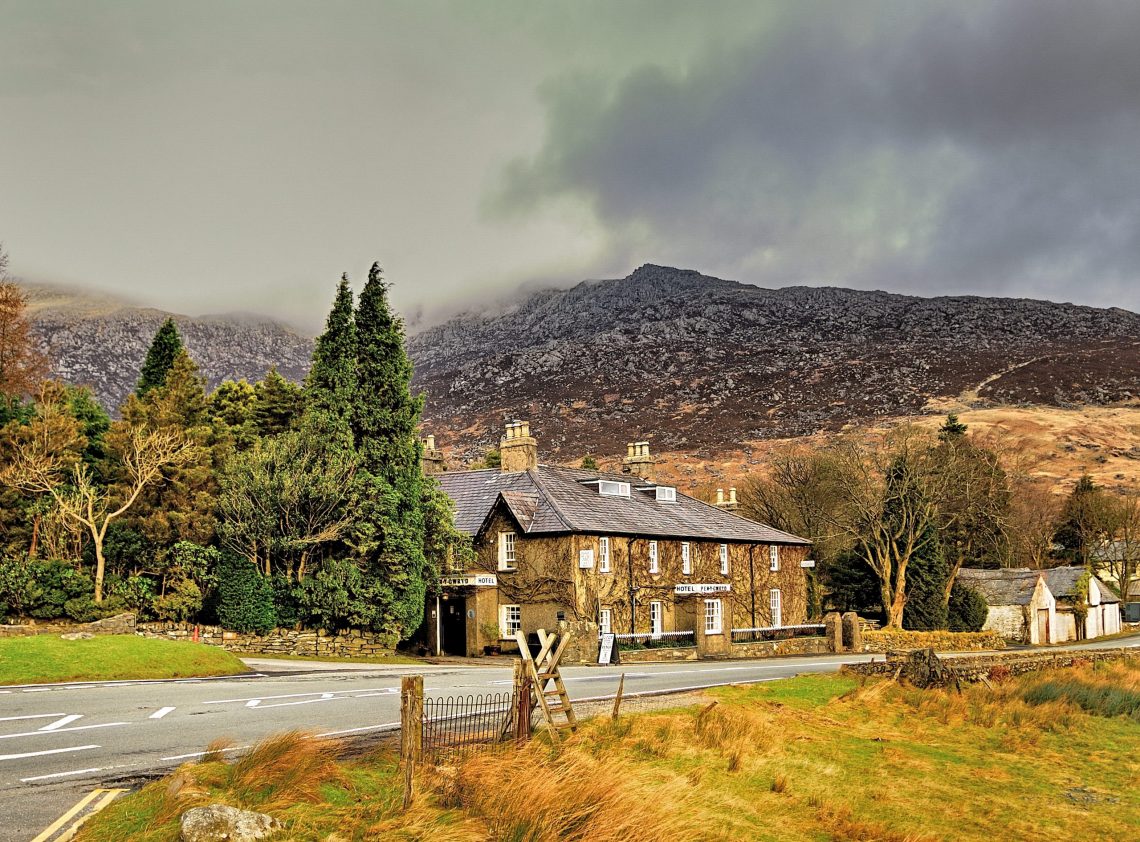 Just a mile or so away from the top of Pen-y-Pass is an unassuming hotel that played a fascinating role in the history of mountaineering. Pen-Y-Gwryd Hotel was where Sir Edmund Hillary and Tenzing Norgay stayed while they trained for the first successful ascent of Mount Everest, reaching the summit in 1953. It was here they plotted the routes and strategies that would take them to the top of the world. Today the hotel is a popular spot for walkers and climbers to base themselves while they explore the magnificent landscape of Snowdonia National Park.

10. Take in a view of Tryfan mountain 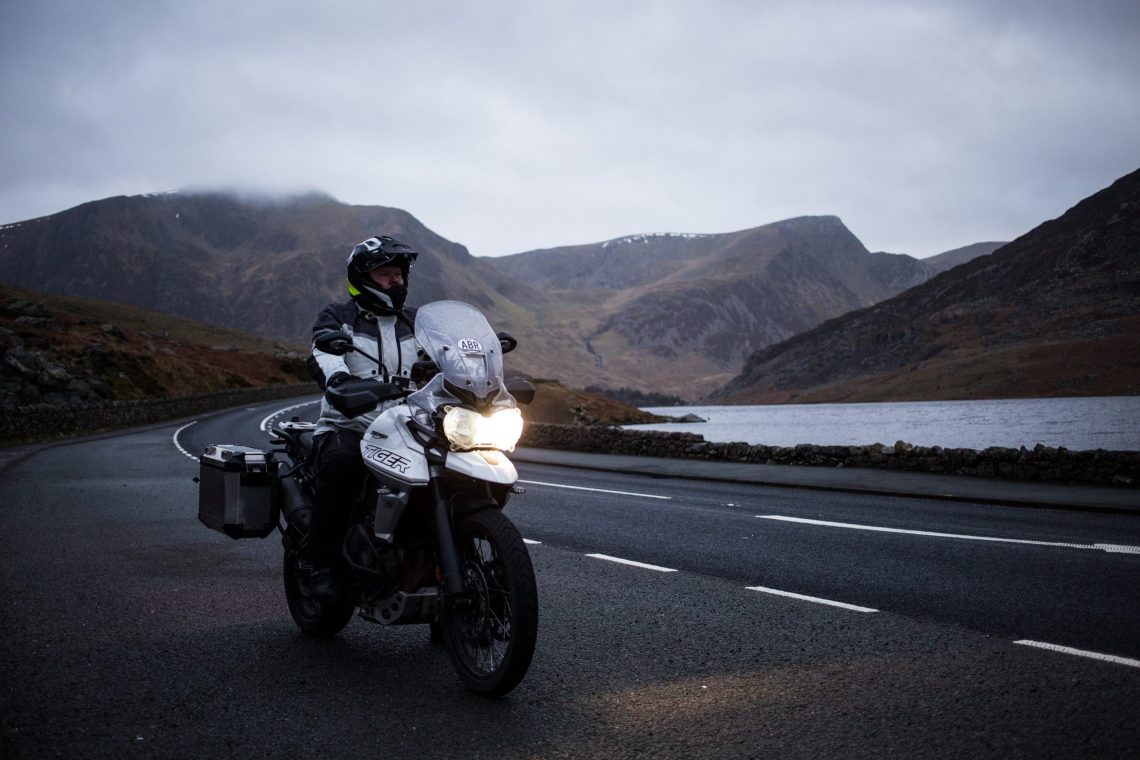 From the Pen-Y-Gwryd Hotel, we take a meandering B-road east before swinging back westwards on the A5. This scenic A-road crosses the width of Wales, but my favourite sections runs past Tryfan mountain. We join the A5 at Capel Curig and soon enough Tryfan comes into view in all its glory. Pull over by the side of the road and spend a few minutes soaking up the view. From Tryfan, we head north on the A5, before picking up the North Wales Express Way and hugging the coast to the start and finish point of this TomTom Amazing Britain route at Llandudno. 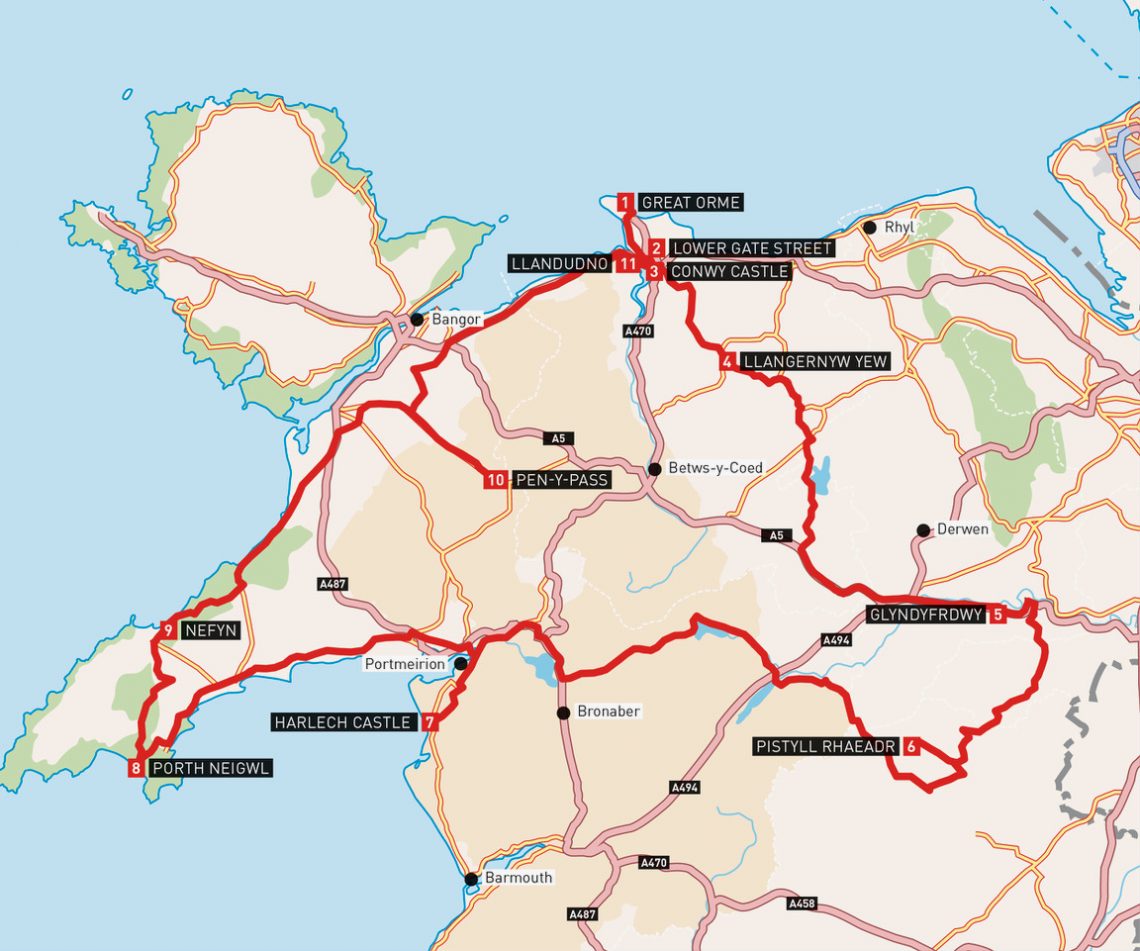 Plug these waypoints into your SatNav to follow, as near as dammit, the ABR and TomTom Amazing Britain: motorcycle route in north west Wales. It’s also available to download as a gpx. file here, so that you can stick it straight into your device without the hassle of thumbing in a new stop every so often. 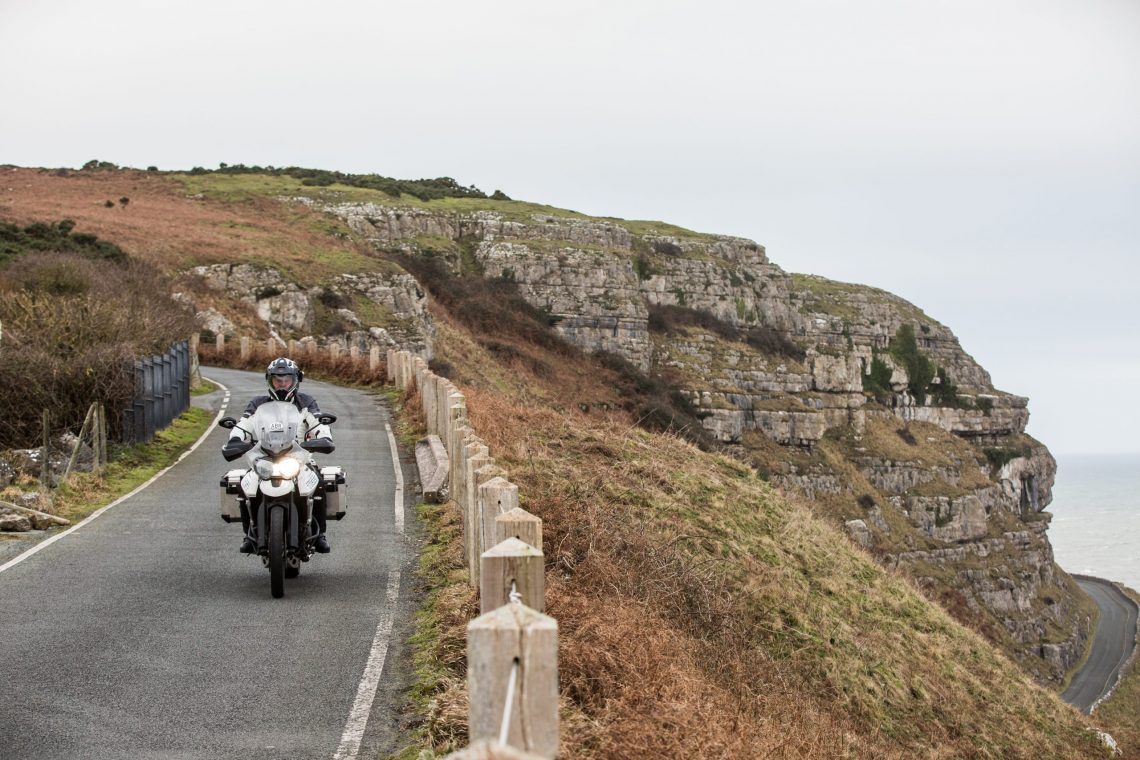 As part of the TomTom Amazing Britain series, we’re asking ABR readers to create their own route and send it in to us. We’ll select the best submission, ride it, and then feature it in the magazine.

As is the case with all the TomTom Amazing Britain routes, yours will need to be in the UK or Ireland, be rideable in a weekend, and must feature a series of fascinating, quirky, awe-inspiring, or downright ridiculous places to stop at and explore.

So, if you’ve got a favourite ride you think others will love, plot it on the TomTom Road Trips portal here, publish the route to the community, and send the link of your marvellous ride to james@adventurebikerider.com. We look forward to seeing it!