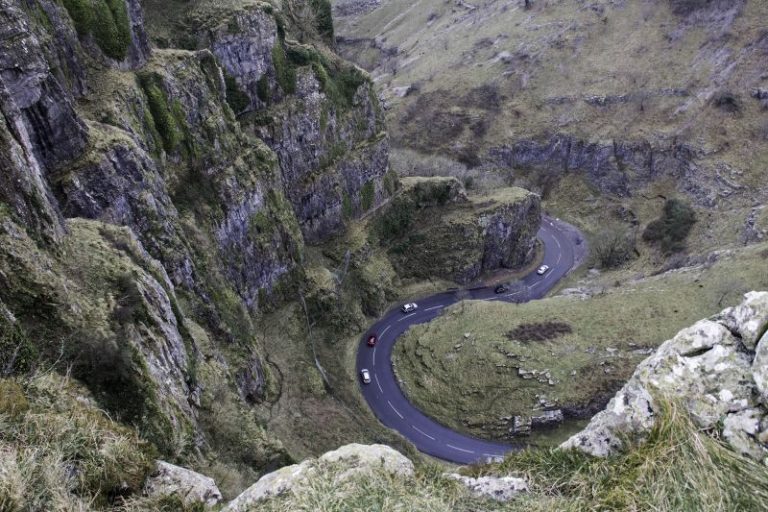 Okay, so if you set off early enough in the morning or later on in the afternoon (to avoid the coaches of tourists and chavs revving their over-modified Corsas), then motorcycling in Cheddar Gorge, in the stunning Mendip Hills of Somerset, is a thing of riding beauty.

Riding the 3-mile road through the gorge itself doesn’t take long, however, the surrounding countryside is a named area of outstanding natural beauty and offers spectacular riding. Cheddar village itself is the perfect base for exploring… Or if you’re anything like me, the perfect place for scoffing a bacon/Brie panini and a brew.

You’ll also find that it’s a motorcycling hot-spot, with heaps of weekend ride-outs, so there’ll be plenty of like-minded bikers to have a natter with.

Cheddar Gorge is a staggering limestone gorge which is approximately 120 metres deep. It boasts a fascinating network of caves which are said to date back to the ice-age, in fact, it’s famous for being where Britain’s oldest complete skeleton was found in 1903. Named ‘Cheddar man’, he was believed to have been buried beneath the ground for over 9,000 years. Also, cheese. Cheddar Gorge is famously known for its cheese, and it’s darn good cheese too.

Anyway, let me steer myself away from daydreaming about food and back onto the riding. The gorge road, aptly named Cliff road, that tightly twists and snakes between the jagged limestone cliffs is only around three miles long, but the scenery is nothing short of spectacular.

The ride to the gorge, through the Mendip Hills, is also very pleasant. I would thoroughly recommend making a day out of it, as there’s an abundance of viewpoints, walks, caves and cafes to enjoy. In the summer you’ll find a pretty cracking ice-cream too.

If you’re from the south, you’ll want to travel northbound on the M5. Take junction 22 and continue on the A38 towards Cheddar, you’ll want to then join the A371 which leads to the B3135 and this road takes you straight into Cheddar

From the Midlands or south-east, you’ll need to set off on the M4 and merge onto the M5 at junction 20 by Patchway. Continue along the M5 until junction 21 which very briefly takes you onto the A370 before turning onto the A371. You’ll need to turn off onto the B3135 which takes you straight into Cheddar.

If you’re coming from the north, you’ll need to set off on the M1, then take junction 23A which leads you onto the A42. Continue down the A42 until you join the M42, you’ll need to stay on the M42 until it merges with the M5. Continue along the M5 until junction 21 and follow the route as detailed above into Cheddar.

In each issue of Adventure Bike Rider magazine we feature a riding masterclass, showcasing the skills you need to handle your adventure bike both on the road and on the trails. You can read them all online by signing up to the digital library, which gives you access to the latest issue of ABR, as well as a decade’s worth of back issues. Click HERE to sign up today.