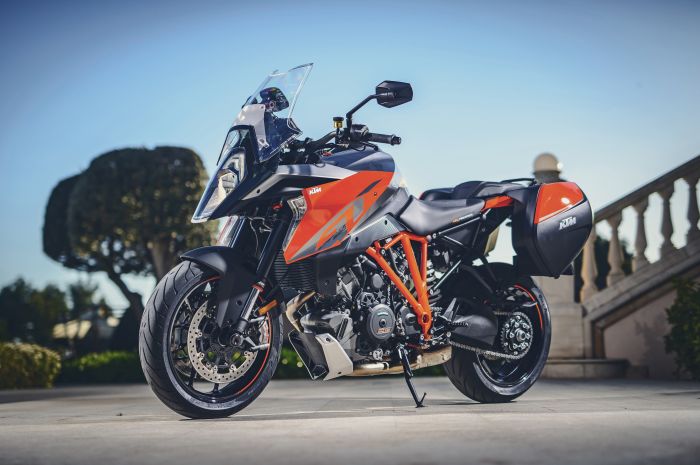 When KTM announced the launch of the Super Duke GT, eyebrows were raised. How could the Austrian manufacturer attach the GT moniker (GT meaning Grand Turismo) to a super naked bike which focused on speed, performance and hooliganism? The answer became clear as soon we got chance to ride one: by making it more comfortable, adding a set of panniers, including the technology that makes the 1290 Super Adventure such a phenomenal machine, and bolting a screen onto the front.

The GT is almost unrecognisable from its Super Duke R brother

Adventure bike this is not (nor does it claim to be), but super fun tourer it is, and if you’re heading over to Europe to experience the thrill of the Alpine passes it’s an absolute delight. After spending a few weeks with the bike in our garage, I found myself increasingly looking for excuses to go out for a spin, and when out, looking for the bendiest roads I could find. It harnesses the power and handling of a performance bike and bundles it into a sexy package that’s a bit less intimidating, but every bit as exciting.

We’ll be posting a full review of the Super Duke GT up shortly, but before we do that, here are four things we love about this nippy tourer.

OK, I know aesthetics are, especially when it comes to bikes, entirely subjective. But with that in mind, when riding the Super Duke GT, we noticed more admiring head turns than we have done with any adventure bike we’ve tested over the years, and in my opinion, this is one gorgeous looking machine. It’s not something you’d call pretty, it’s sharp, aggressive and angular, and looks more like a prop from Judge Dredd than from Long Way Round, but that badass nature is part of the appeal. The KTM orange is a colour that can look a bit gaudy when overused, but on the GT it a just works and adds to the fierce image of the machine.

With the GT, KTM has taken the best bits of the standard Super Duke and bred them with the incredibly sophisticated technology of the 1290 Super Adventure, and the result is a bike with phenomenal performance and the technology that allows you to make the most of it. The geometry, frame and single swingarm all come from the Super Duke R, but it’s the inclusion of semi-active suspension, cornering headlights, rider modes, cornering ABS, and traction control that have been inherited from the Super Adventure.

Electronic ABS and traction control systems have their detractors, as do central heating and the Romans, but having benefited from both in real life red mist and casual ride situations, they are seriously impressive rider aides. All of this electronic wizardry is controlled by a Bosch six axis IMU Control Unit, which KTM calls its Motorcycle Stability Control. In simpler terms, it means not only can you brake and change line mid-corner, but you can power out of a wet, slippery bend with far more confidence and control.

If you have any aspirations of hitting the trails on your tours, move along. But if you’re a stickler for tarmac and searching out the best roads in the area, then the Super Duke GT is a bike that’s going to excite, enthral and enthuse you. The performance from the 173bhp LC8 engine is blistering to the point that it’ll compete with most sportsbikes on the road. If you keep the revs above 5,000rpm, the GT catapults away from bends at a rate of knots that will either delight or terrify you (probably both). It’s good news, then, that the Brembo brakes and sharp, steady handling compliment the enormous power.

Riding at pace on the GT around country roads and lanes produces more of those man and machine in perfect harmony moments than most other bikes I’ve ridden. Something that was particularly evident on the series on three tight twists on Fish Hill in the Cotswolds (it’s the closest we have to an Alpine pass), where the power, performance and poise can be used as the KTM engineers have envisaged they would.

Sportsbike performance but with comfort

As mentioned above, the Super Duke GT is a demon on the tarmac, but this power and performance doesn’t mean you’ll have to spend the next day planning an appointment with your chiropractor. While the comfort provided isn’t quite at the level of other adventure sports tourers, and the emphasis of the GT is definitely more on the word ‘sports’, for those making the jump from sportsbikes to a more upright riding position, the perch is a welcome place to be. The seat is firm and comfortable over long distances, while the bars provide a slightly more comfortable riding position than on most sportsbikes where the back is bent and weight is on the wrists.

Like the sound of the KTM 1290 Super Duke? Then you’ll love this. KTM is offering complimentary KTM PowerParts ‘Touring Package’, worth over £1,000, at no additional cost when you purchase a KTM 1290 Super Duke. The package includes; Ergo Heated Seats for rider and passenger, seamless Luggage System key and colour-matched to the bike, and a GPS mounting bracket, all of which go a long way towards making the Super Duke an even more capable sports tourer. Simply head down to your nearest KTM dealer to find out more.