5 stunning alpine passes you need to ride this summer

With the summer in full swing and a heat wave upon us, attention starts to turn to where we will be taking the bikes out next. Fortunately for us, we can catch a ferry over to France and we’re only a day’s ride away from some of the most amazing passes in the Alps, and probably the world. That’s why we’ve decided to pick out five of the best Alpine passes that you should ride this summer. 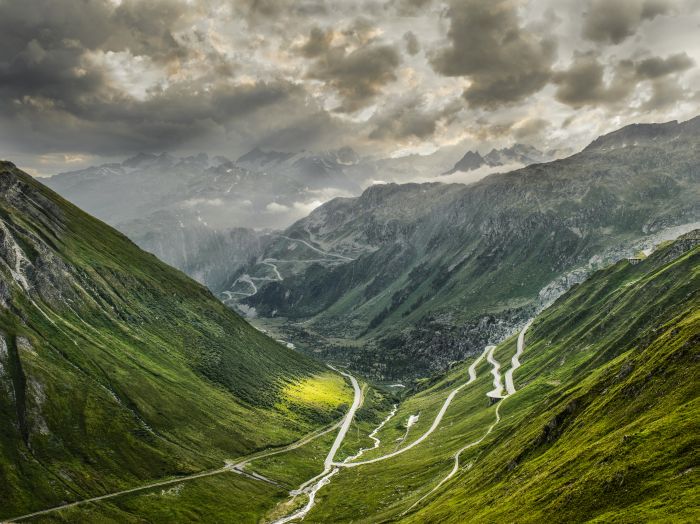 Initially constructed in 1866 for military purposes, the Furka Pass was the longest mountain pass in Switzerland and today it’s one of the snowiest. Reaching heights of 2,400m, the pass provides a challenging but rewarding experience with sharp, blind turns, hairpin bends and steep slopes. This is one which is bound to get the adrenaline pumping. The west side of the mountain begins with steep and challenging riding, but this is followed by a gentler section which allows you to take in the sensational, panoramic alpine views.

The ride also takes you within touching distance of the Rhône Glacier, a majestic sight that is sure to get you off the saddle for a pit stop. The pass gets much narrower on the run down into Andermatt so less experiences riders should take care, especially as some areas lack a side barrier. As a reward for all of that concentration, the final section of the pass on the east side of the decent offers a straight, flat section allowing you to open the throttle in celebration. 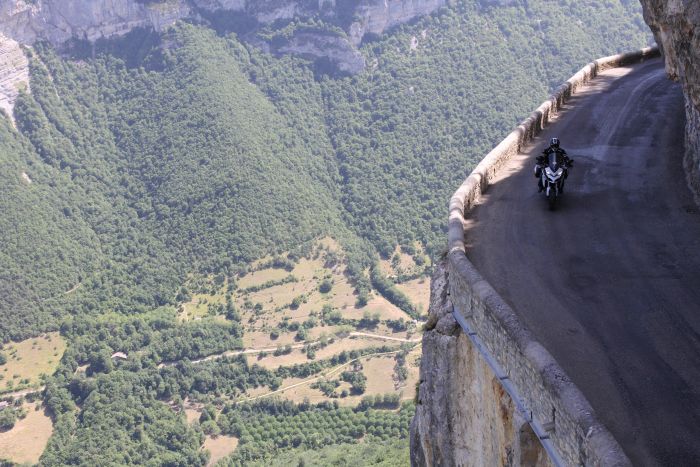 Do not attempt this pass if you have a fear of heights. Set in the Vercors, Combe Laval Road is regularly regarded as one of the most magnificent roads in the French Alps, and we can see why. The pass is one of several balcony roads that exist in France, a road that is cut into the cliff with nothing but a short wall to separate you from the fear-inducing drop on the other side. The road often gets so narrow that only one vehicle can pass meaning that sometimes people have to reverse for a significant distance before they can get by.

Not only is the road narrow, but it is constantly winding and you’ll want to keep your concentration to avoid getting too close to the edge and ending up in a free-fall back down to Earth. But forget all of those difficulties, the pass offers some amazing views over the gorge and if you are brave enough to take your eyes off of the road, you’ll realise just how spectacular it is.

Just an hour south of Zurich, the Klausen Pass is one of the great rides that take you into the heart of the Alps. Fortunately for all of us bike enthusiasts, the road remains relatively quiet due to a highway alternative meaning you will only ever come across locals or other bikers. Following a cobbled section, the pass takes you through a section of alpine forest with some awesome high speed sweeping corners. After a series of tight switchbacks and small tunnels you will emerge into another section of forest which presents the chance to crank up the throttle along a straight stretch.

The pass then takes you onto an alpine Plateau with some really epic granite peaks reaching up to the skies. This section offers some great views including a couple of impressive waterfalls at the end of the valley. From here you take the hill climb out of the basin which is basically carved into the rock face and features a lot of tight turns. The ride back down will take you alongside some spectacular, or worrying (depending on your outlook), drop offs, through sweeping turns and into the alpine forest once again. Be sure to look out for the spectacular waterfall towards the end of the valley! 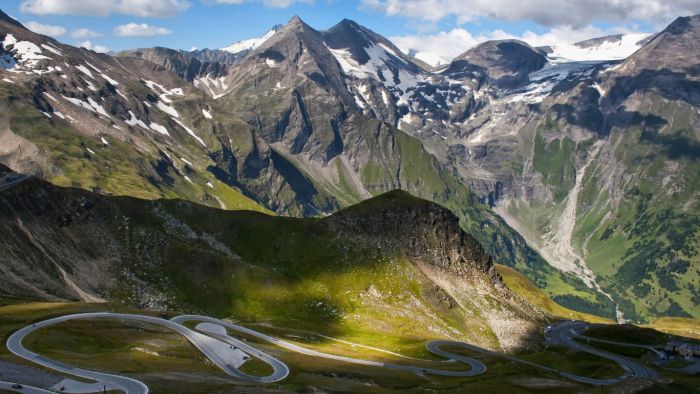 Known as the highest surfaced mountain pass in Austria, the Grossglockner alpine Road is a remarkable one at that. It reaches an elevation of 2,504m and takes in panoramic views over the Johannisberg, the Grossglockner massif and the Glocknerwand. Be sure to branch off to Kaiser-Frankz-Josefs_Höhe (2,369m) where you can take in views of the impressive Pasterze Glacier.

The road, historically starting in the town centre of Bruck, covers 48km taking you past picturesque alpine meadows, alpine forests and towering cliffs. The stunning panoramic views can mean that the Grossglockner High Alpine Road can often get quite crowded with tourists so we recommend heading out earlier to really make the most of it. You should also be aware that there is a €24 fee per motorbike at a toll booth, but we think it’s worth the money. 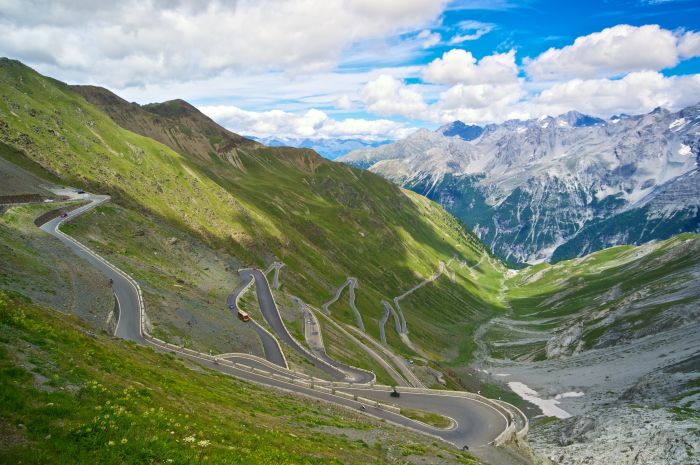 Voted the best driving road in the world by Top Gear in 2008, the Stelvio Pass certainly has a dramatic presence and despite its popularity, it should be on your list of roads to ride. Officially the second highest in the Alps at 2,757m, the Stelvio Pass features a total of 48 switchback turns making it a truly remarkable road to ride. Be sure to tackle the pass from the north-west side in order to make the most of the plethora of switchbacks.

The approach to the start of the pass will take you through Stelvio National Park allowing views of spectacular stretches of alpine forest and some great sweeping roads before the hard work begins. Be aware that the road does get very popular, so if you want to tick it off your bucket list, we recommend visiting at the start or end of the season and heading out early on a weekday.