Who’s in the wrong: Motorcyclist gets cut off on Los Angeles freeway 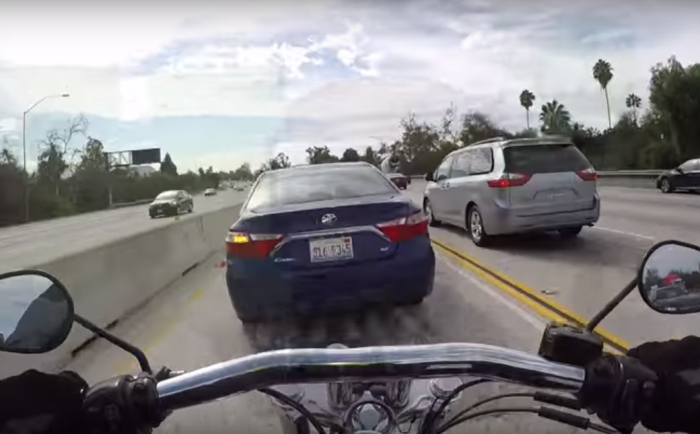 We all know the dangers that riding a motorcycle can bring. And when I say dangers, I think we all know I mean looking out for plonkers in their cars who “oh didn’t see you, sorry mate.”

When I first started watching the video and I saw the car start to pull out several hundred metres away from the rider into his lane, I immediately thought ‘oh yeah here we go, classic’. The car clearly didn’t look.

Now, as I continued to watch and saw the riders lack of reaction on the brakes, followed by his Oscar worthy dramatic performance after the incident, I started wondering if the accident could have been avoided should the motorcyclist not have been speeding and hadn’t wanted to make a massive point in front of his camera. Don’t get me wrong, it’s a very valid point that does need to be made and his message in the opening part of the video is very true, however, I feel there are better ways to go about it.

I am making assumptions here, having only seen a few minutes of video footage and not knowing the actual speed in which the motorcyclist was riding at. But, having watched the video repeatedly, I can’t help but think that in that moment, if it were me, I would have done more to have avoided that situation.

Lyra57: The motorcycle rider acted like that kind of thing happens to him all the time.

WTPanda: Wow. What an unnecessarily confrontational a**hole. The hilarious part is where he gives a life lesson to the camera about not letting a**holes get away with being a**holes.

True_gunman: Yeah he’s a d*ckbag. He just drives around like an entitled douche and tries to find people who make slight mistakes on the road so he can yell at them.

IrishinManhattan617: There is a difference between legally right and socially stupid. Yes the biker had the right to be in that lane, but as a biker of several years there is no way I’d be speeding that fast with traffic slowing down around me.

Take a look for yourself…

Looking at the YouTube channel of the guy on the motorcycle, it does seem he likes to ride around like a d*ck head, purposely looking for trouble so he can upload a new ‘cool’ video to his channel. What a tit. Let’s just hope he’s not seriously hurt one day in his search for internet fame, eh?

I’d love to know what you think about the video, let me know in the comments section below.