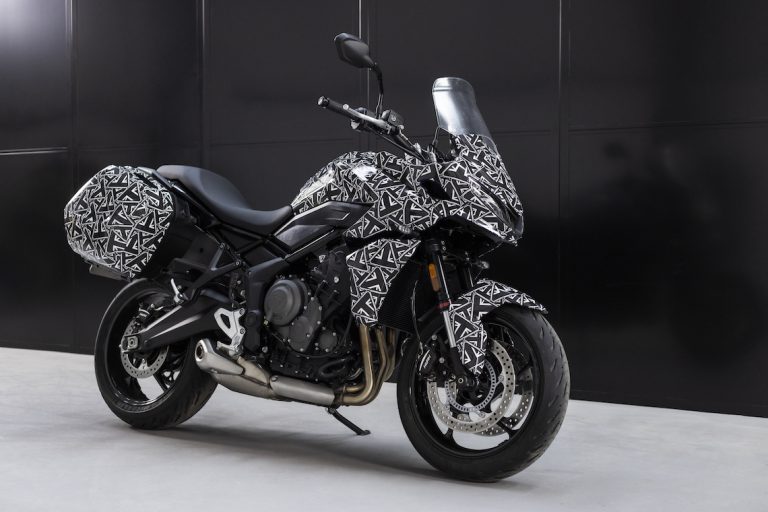 Triumph has just pulled back the curtain and given us a first glimpse at the newest addition to its line up, the Tiger Sport 660.

The British brand hasn’t given away too many details about the new bike, like the specifications, colour schemes, or price, but it has released a series of photos that have got us very excited here in the ABR offices.

And, after speaking with Triumph, we’ve learnt a little more about what to expect when the Tiger Sport 660 is released. Here’s everything we know so far.

What can we expect from the Triumph Tiger Sport 660?

The new bike, which is currently going through its final phase of testing, is the UK-based manufacturer’s entry into what it’s calling the ‘middleweight adventure sports category’.

With that in mind, we’re expecting the Triumph Tiger Sport 660 to deliver long-distance comfort and exciting performance for riders who enjoy touring on tarmac, but have little inclination to turn off-piste on their adventures. This impression is backed up by images showing the bike equipped with a touring-friendly screen, factory-fitted panniers, and a large comfort saddle, while handguards, engine bars, or knobbly tyres are nowhere to be seen.

In an effort to guarantee that all-important excitement in the saddle, Triumph is sticking with what it knows best, equipping the new Tiger with its signature triple-cylinder engine. The 660cc power plant is likely the same as the one in the Triumph Trident 660, so we’d expect the power figures to be similar to the 84bhp and 64Nm of torque that the Trident produces.

I’ve been lucky enough to ride Triumph’s triple-sporting Tiger 900 Rally Pro and Tiger 850 Sport recently, both of which deliver smooth cruising and ample power, and I’m hoping that the team in Hinckley will be able to replicate that in a smaller package.

A triple-cylinder engine is also likely to set the new Tiger Sport 660 apart from its twin-cylinder competition. First impressions of the bike suggest that Triumph has set its sights firmly on rivalling two touring-friendly bikes on the market right now, with Yamaha’s Tracer 700 the most obvious rival, followed by the Kawasaki Versys 650.

Only time will tell how it matches up but, if the new Tiger is anything like its older and larger family members, we reckon it’s going to be a lot of fun to ride. Check out more photos of the new Triumph Tiger Sport 660 below and keep an eye on the Adventure Bike Rider website in the near future for more updates as and when we get them.

And don’t forget, you can keep yourself informed with the latest news and views from the world of adventure biking by subscribing to the weekly ABR Bulletin on the right-hand side of this page.