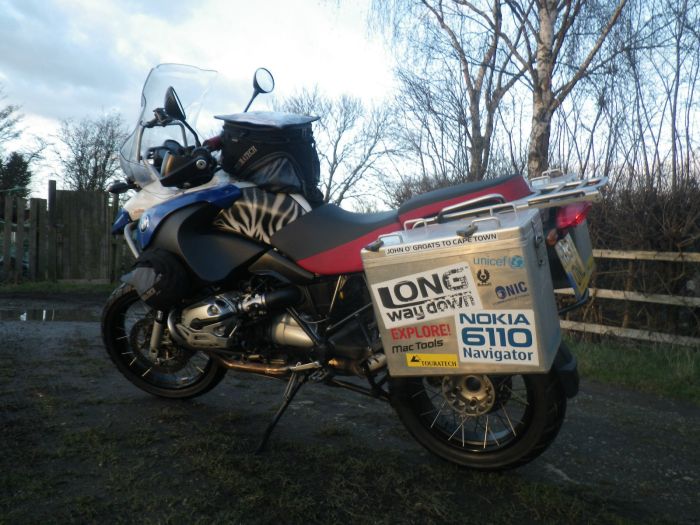 A BMW R1200GS Adventure with full Long Way Down styling has popped up for sale on eBay with documents to prove that Ewan McGregor was the first registered keeper.

The bike does not appear to be the one that was actually used in the series (that one is actually on show at the Riverside Museum, Glasgow) but perhaps one that was given to Ewan to sell for charity.

According to the listing, the bike was sold at a charity auction by Ewan and Charley Boorman for £50,000 to raise money for UNICEF. The seller claims to have all providence of the charity biker party where the bike was sold and a copy of the logbook to back this up.

With one side of the bike painted in Ewan’s colours and the other in Charley’s it’s certainly a unique bike, especially with the addition of a signed message from Charley.

The bike has full BMW service history and was last serviced on 3 February. It has two keys, a new battery, two new tyres and comes with Touratech panniers, tank bag and crash bar bags.

First registered in 2007, the motorcycle has 19,000 miles on the clock and has also just had a new MOT. At the time of writing there have been no bids and the motorcycle is priced at £9,999.

As ever, it’s hard not to be slightly dubious of bikes like this on eBay, but you can find out more about the motorcycle by clicking here.