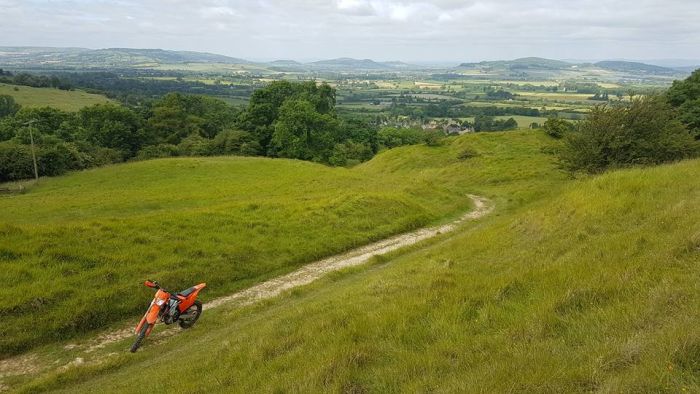 Well, I guess that’s that then. Today marked the fifth and final day of Green Lane to Work Week, and what a week it has been. Over the past five days we’ve teamed up with Bennetts insurance, and we’ve ridden a green lane on the way in to work in an attempt to start the day right an inject some adventure into our every day life, and boy has it delivered on both accounts.

Ascending the green lane by Stanton

Today we headed in to the Cotswolds to take on two routes that we usually incorporate into the ABR Midlands Rally green lane ride, a short and easy lane between Weston Sub Edge and Broadway and a longer, slightly more difficult trail by the small village of Stanton.

Our route started out with a nice 10-15 minute ride from Stratford upon Avon to West Sub Edge, entering the Cotswolds Are of Outstanding Natural Beauty by Mickleton and continuing on to Weston Sub Edge. The sun was shining and I had my mesh jacket on, and the smile was starting to creep across my face. The KTM 250 EXC-F isn’t exactly built for road riding, but I was more than happy on it for this short stint.

Upon reaching a sharp right hand bend after Weston, you’ll see the lane branching off to the left. In the winter the first section is very straightforward, with it being a hard base and no real difficulties other than a few puddles. In the summer it’s a bit different, as the hedges and the centre of the lane become overgrown with lush green vegetation. After a while you take a right hander and then a left and begin a long ascent uphill.

In the wet this part can get a bit tricky, but today, in the dry it was a simple run to the summit where it levels out and then deposits you back onto the road. This little lane was the perfect warm up for what was to come next, and after filling up in Broadway I was ready to go.

Lane two can be found to the right of The Mount Inn in Stanton. It looks like it’s not a lane, with there being a few steps up a path to a gated track, but it is. The steps are easy enough if taken at a decent pace, and the ground underneath at this point is pretty much pavement. After the gate you begin a glorious ascent up a thin dirt track with a few rock steps in your way. On a trail bike it’s a doddle, but on a big adventure bike without full confidence you could find it a bit tricky. In the wet it’s a different ballgame, but, as I said, today was dry and the going was great.

As I pootled up the hill I saw a woman darting off the path into some trees. Suspicion got the better of me, and as I passed I turned my head to have a look. There she was, standing with her camera pointed at me. Now, either she didn’t approve of my being on the trail, or she was in awe of my riding skills. Judging by the frown on her face I’m going to say it was the former! Still, the lane is a fully legal green lane, so I won’t be expecting a knock on the door anytime soon.

After passing through another gate I met my match in the form of a downed tree. Further assessment revealed that I wouldn’t be able to ride around it, so I headed back the way I came, which I was planning on doing when I got to the end of the lane anyway (which was only about 50m away). As I rolled down the hill soaking in the magnificent view over the Cotswolds I came across a gentleman who was trekking up with a saw. He’d been told about the downed tree and he was on his way up to remove it. What a decent thing to do.

I would have offered to help, but I had to be on my way to work, so I told him of my appreciation and set off back to Stratford and the ABR offices.

Today’s green lanes were both located on the north west boundary of the Cotswolds Area of Outstanding Natural Beauty. There’s only a few miles in between them, and this is on wonderful roads, including Fish Hill which has a lovely series of switchbacks.

And for Lane 2 (Near Stanton). The entrance I used is on the outcropping arm nearest the B4632:

So, the last day of Green Lane to Work Week was probably my favourite in terms of the lanes that I rode. But each and every day this weeks has been an adventure, and starting with a blast down a trail seems to be the perfect way to wake you up and get that feel good factor for the rest of the day.

While our ride to work week has come to an end, and we must thank Bennetts for teaming up with us during this time, there’s nothing stopping you from tackling a lane on your way in to work next week, or the week after. Trust me, you’ll be thankful you did.