Green Lane to Work Week, Day 4: Are we all hooligans? 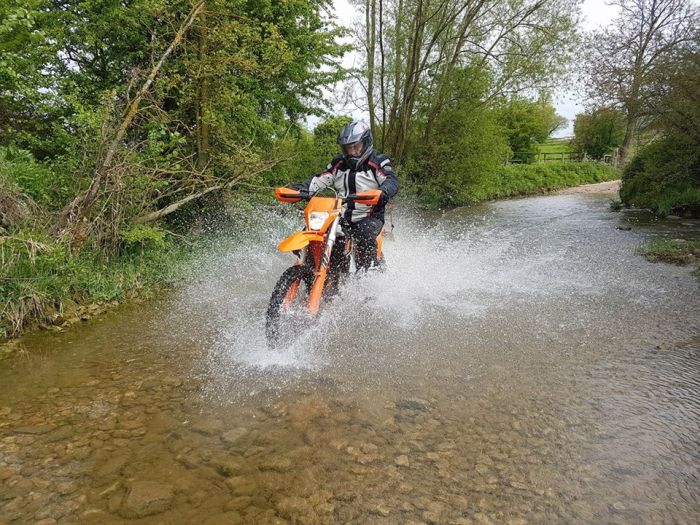 Green Lane to Work Week is almost over, and I’m a little bit sad about that. Over the last four days we’ve teamed up with Bennetts to spice up our life on two wheels, and I’ve been getting up earlier to head off in search of a green lane to ride on my morning commute to work. The main benefit, other than the fact that I’m out on the bike, has been that it seems to be the perfect way to start my day, and I’m sure it has been for you guys who have joined us as well.

Yesterday we rode the Newbold Pacey Road near Wellesbourne in Warwickshire, and today our intention was to travel west to the small village of Aston Cantlow to ride a nice and easy lane that takes you across a few fields and up through a wooded section. But sometimes even the best laid plans don’t work out.

I had checked the status of the green lane the day before, and all seemed well – the only potential issue was a VTRO in place for motorised vehicles that prohibited use after periods of rainfall. As this week has been so nice I saw no reason why I wouldn’t be able to tick it off my list, but as I rolled through Aston Cantlow a barrier across the entrance to the route that spelled ‘road closed’ made me think twice.

Wishful thinking got the better of me and, not entirely convinced that the barrier was there for the lane, I decided to head to the other trailhead to see if there was a road closed sign there as well. I couldn’t see one, but as soon as I pointed my tyre in the direction of the track an angry looking local came out and informed me that I would be breaking the law if I headed off down the green lane.

I still wasn’t convinced as I’ve dealt with more than enough freedom fighters who think that they can enforce their own laws to just take his word for it. So, I spoke to the gentleman for a few minutes. The lane has, by his account, been closed for the last 12 months by order of the council in a bid to prevent anti social behaviour occurring on it.

The lane that I had wanted to ride

Now, when I think of anti social behaviour on a green lane I get images of riders and 4×4 drivers cutting up the ground, but this was something a bit different. Apparently this little trail out of Aston Cantlow had become a favourite haunt of a group of ‘youths’ who thought it was a great meeting point for their early morning escapades.

Of course, as long as you’re behaving and not causing a disturbance, there’s nothing wrong with meeting a group of mates, but the local chap went on to tell me that they were racing up and down the track multiple nights per week at 2-3AM and swearing at the locals when confronted. To make matters worse, the farmer had his quad bike stolen by the gang.

So, I thought to myself, fair enough, and went on my way. This news scuppered my plans to ride a lane on the way to work, as the next closest one was about a 45 minute to an hour round trip away, and I didn’t want to be late to work. Weighing up my options I decided to head back to Wellesbourne where I’d ride a very short route near Walton which takes in a nice river crossing – I’d woken up too late for my morning shower so it seemed like a win win.

On my way over to the track my mind started to wonder, and I thought about the closure of the lane and how the actions of the few have ruined the fun for the many. While it’s a pain in the arse to not be able to ride the route, I couldn’t help but sympathise with the locals who were being ‘terrorised’ in the early hours of the morning, but was closing the lane the real solution?

Previous experience on the green lanes of Wiltshire had given me misconceptions of trail abuse!

Folks like these clearly have little regard for the law, and if they see a road closed sign it’s not going to stop them – but for a law abiding citizen like myself, it sure prevented me from riding the trail. Is there another way to prevent them from turning up and causing a nuisance? Probably. CCTV installations might work, if they’re feasible. Police patrols every now and then would certainly act as a deterrent. But are either of these options likely? Absolutely not. So we’re left with a situation where the lane gets closed and anyone with a helmet on is branded a hooligan.

My inner monologue on the politics of green lane closures was interrupted as I reached the turn off for the Walton ford, and happier thoughts began to cross my mind when I saw that the usually high river had settled in the recent warm weather. I took a few moments to walk across the bridge and scope out the conditions underneath the water, threw my helmet on and made as big a splash as I could. What a way to wake up! It was so nice that I turned around and did it again, and again. The route back to the road on the other side is only about 100m of dirt track, so as it began to approach 9AM I took my leave and headed for work, drying off along the way.

This whole experience highlighted to me that although we’re calling this week Green Lane to Work Week, you don’t have to ride a green lane to get the same rush on your commute. You simply have to seek out a little bit of adventure and break the monotony of your usual journey. If you can find a river crossing, do it! If you see a nice little road that you usually ride right past, go and find out what’s down there, you’ll be surprised what you might come across!

Tomorrow is the last day of Green Lane to Work Week, and I think I’m going to get up extra early and head into the Cotswolds to cap the week off with a nice run of two or three lanes that we regularly incorporate into our ABR Midlands Rally (which, incidentally, is being held next month).

The last question on my mind is this: Are you going to join us for the last day of Green Lane to Work Week?! Grab your helmet, slip on your boots and throw a leg over the saddle and hit the trails – oh, and when you do, take some pictures and upload them to social media using the hashtag #ItsWhatWeDo, we’d love to see which lanes you’re riding.