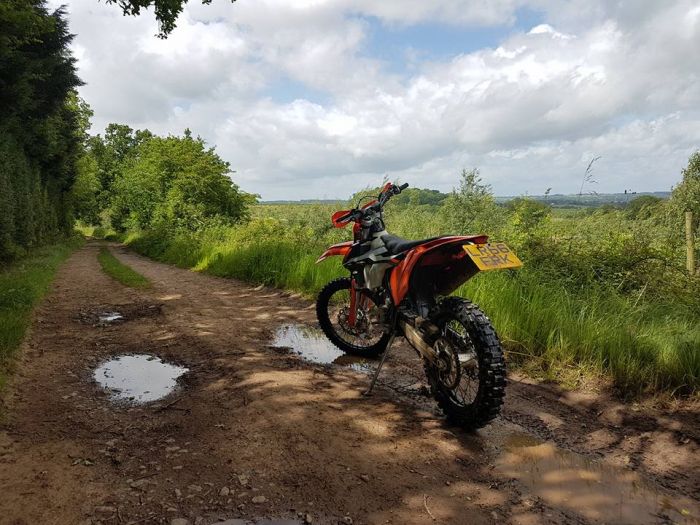 Yesterday we announced the launch of a new initiative that we’ve introduced with Bennetts. It’s called Green Lane to Work Week, and it is exactly what it says it is – a week in June, this week to be precise (12 – 16 June), where you inject a bit of adventure and excitement into your every day commute. The premise is simple – on your way to work each day get out your OS map and ride a green lane.

Yesterday we took a bit of a diversion from our usual commute and headed to the small village of Great Alne in Warwickshire, where we rode a gentle trail from Spernal Lane into the village. This morning we went back to the same place, but continued down the road for a mile or so, ‘till we found a route that links Spernal Lane with Coughton, a small village between Alcester and Studley.

So, I left home a little earlier than usual today because I also wanted to have a bit of a play in Coughton ford, and by the time I reached Spernal Lane I had plenty of time to spare. I knew where the entrance to the lane was as I used to ride my push bike up and down it when I was younger (I used to live basically over the road). While this is a green lane, it’s unusually marked on Google Maps, as you can see in the images below, making it a lot easier to find.

Like yesterday’s trail, this one is also big bike friendly, though it wasn’t always that way. Last time I came down here a few years back it was muddy as heck, and there were areas that were rutted up. Today it’s basically a gentle farm access track, with a few deep puddles here and there. Not to worry though, as it just allows you to concentrate on the beautiful English countryside that surrounds you.

The trail is only 1.3 miles long, but on reaching the western end of it you can turn right and get a nice water splash through Coughton ford. Obviously, if you’re heading in to work after this you’ll want to make sure you stay as dry as possible!

While I’ve only been green laning on the way to work for two days now, one thing is clear. Hitting the trails before you spend nine hours at the office is a great way to wake up. I’ve set my alarm for 6am before in an attempt to start the day right by going to the gym, and ended up hating life, but after throwing the KTM about a bit I was raring to go!

Today’s route, the Arden Way, is dead simple to find. See that thin white line between Coughton and Spernal Lane, that’s it.

Wednesday brings not only another day and another dollar, but also another green lane! We’ve pretty much exhausted the supply around Great Alne, so tomorrow we’re heading to Wellesbourne for something slightly trickier.

Want to get involved with Green Lane to Work Week? Then what are you waiting for?! Grab your helmet, throw your leg over the saddle and join us by uploading your photos to social media and tagging it with #ItsWhatWeDo.