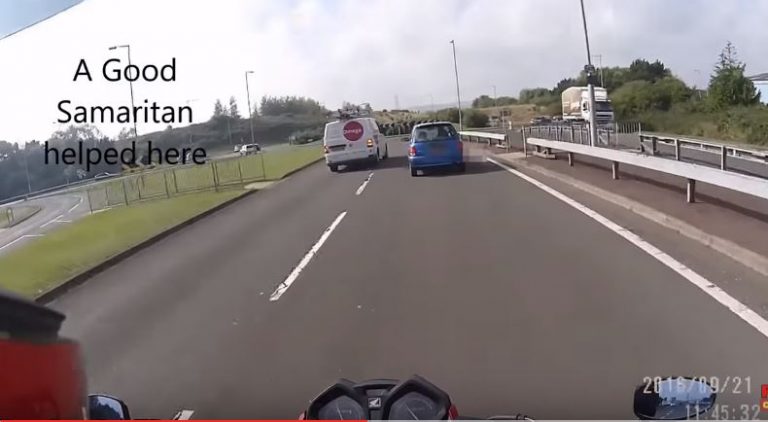 It’s an unfortunate fact of life that if you ride a motorcycle you’re more vulnerable on the roads than a car driver. A little ding can be fatal and it seems that a lot of drivers are blissfully unaware of the damage they could potentially do by not paying attention.

So this video will likely enrage many as it showcases ignorance in the highest form, coupled with completely irresponsible driving and the emergence of a hero of the people.

The video shows a rider, YouTube user Ts X GamingHD, approaching a roundabout in the left-hand lane, riding alongside a Nissan Micra. As the bike and car negotiate the curve of the road the Micra veers into the path of the bike, causing a collision.

Now, rather than doing what any decent man or woman would do, which is stop the car and make sure everything is OK (regardless of who was at fault), the Micra driver takes flight in an attempt to flee the scene. Presumably he doesn’t value the bodywork on his car, or the well-being of another human being, highly.

As the cameraman struggles to comprehend what’s just happened, he takes off after him in an attempt to have a word and swap insurance details. The chase is on, and with the bike potentially suffering from damage caused from the accident, it appears that the Micra has all but got away.

All of a sudden a hero in the form of a white van man speeds past the assailant and blocks the road, ensuring he can’t continue his getaway. The rider then proceeds to phone the police to report the hit and run.

Now, obviously the driver of the Micra was in the wrong for speeding off after hitting the motorcyclist, but who do you think was in the wrong for the accident? There’s a lot of debate in the comments section of the YouTube video arguing the case for both driver and rider, but from where I’m sitting I’d put the blame on both of them. Let us know your thoughts in the comment section below.