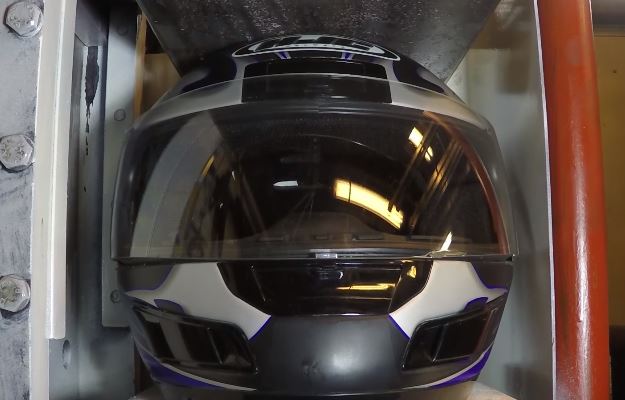 When Tim Berners-Lee invented the World Wide Web we were gifted an incredible tool that would allow us access to all of mankind’s knowledge with the tap of a few keys. In true human fashion, instead of taking advantage of the offer, we used it to find cool stuff like this, a guy crushing a motorcycle helmet in a hydraulic press.

It appears that over the last year or so, flattening everyday items in an industrial Bramah press and uploading the carnage to the internet has become a popular and lucrative pursuit for some YouTubers.

While I’ve sat through videos of elastic band balls, golf balls and iPhones getting crushed, I found this one genuinely mesmerising.

Someone decided to put a HJC motorcycle helmet in a hydraulic press to see how it fares against 150 tonnes of pressure (just a few tonnes off the weight of an adult blue whale) and, all things considered, it doesn’t do too badly.

The helmet puts up a good fight but ultimately it’s no match for PressTube’s industrial machine, and it ends up as a blob of mangled materials. The visor, like an inanimate Houdini, almost manages to escape unscathed.

While the video doesn’t really offer any practical insight in to helmet safety, it’s still fun to watch, and it’s a stark warning for any adventure bike riders who are planning to ride near industrial presses – keep your heads out of them.