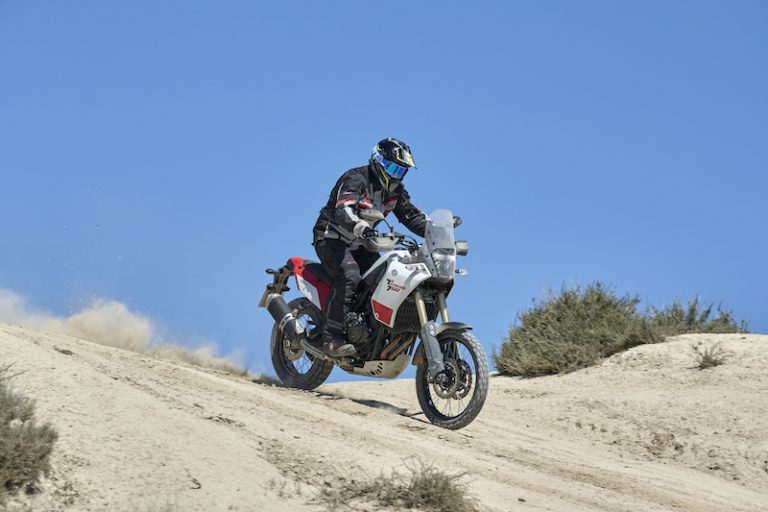 Heritage is an important word within the motorcycle industry. If you don’t keep in touch with where you’ve come from, then it’s likely that you’ll lose touch with where you are going. And in terms of off-road heritage, Yamaha has a truly enviable back catalogue.

From way back in the 60s and the launch of its very first dual sport motorcycle, the DT-1, right up to the company’s modern-day success within world motocross, supercross and, of course, rally racing.

But it’s within the Dakar Rally that Yamaha first established its reputation for supremely tough all-terrain motorcycles, with Cyril Neveu taking the iconic XT 500 to emphatic wins in the first two years of the historic rally.

It’s the experiences and knowledge learned from the Dakar that lead to the very first Ténéré back in 1983, creating arguably the world’s first adventure motorcycle decades before the term even existed. 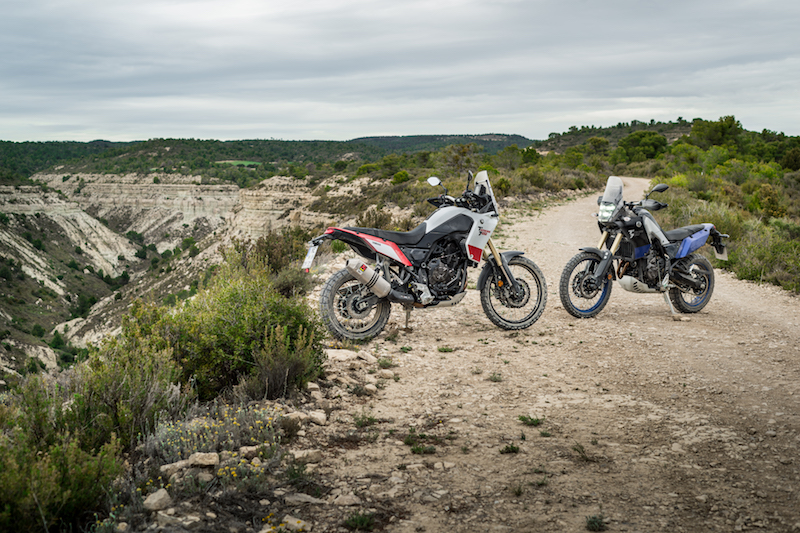 So, some 36 years later, the relaunch of the next generation of Ténéré was always going to be a big deal, even if the process seems to have taken an interminable time to reach fruition. But that, like the bike’s heritage, is in the past, and the XT700Z Ténéré is here and you can place your order for the next chapter in the Ténéré’s long history. And hell – you’re going to want to!

The new Ténéré 700 is everything that we wanted it to be and maybe far better than we had dared to hope. Yamaha has bucked the trend within the adventure market that has seen bikes getting bigger and bigger and more and more complicated and produced a simple, yet extremely capable motorcycle that can hold its own in any environment.

Whether you are planning trans-global adventures or commuting to work, working your way through the TET or ‘A’ road scratching at the weekends, the new Ténéré 700 will rise to the task and do it well. This is a truly versatile motorcycle.

At the heart of the new bike is the CP2 (that’s Cross Plane 2 cylinder) motor, lifted straight out of the ultra-reliable and extremely popular MT07 road bike. OK, so Yamaha has had to redesign the exhaust, cooling system, airbox and tweak the performance for the new role, but internally the motor is unchanged. When you’ve already got a winning formula, that’s a good decision.

Wrapped around the outside is an all-new steel frame that uses the engine as a structural part which has kept the weight to sensible levels. OK, it’s still a smidge over 200kg fully fuelled, but for all those with expectations of a featherlight machine closer to 150kg it’s time to accept that that an adventure bike that can take two people and luggage across the world without breaking is going to weigh at least 200 kilos. Period. 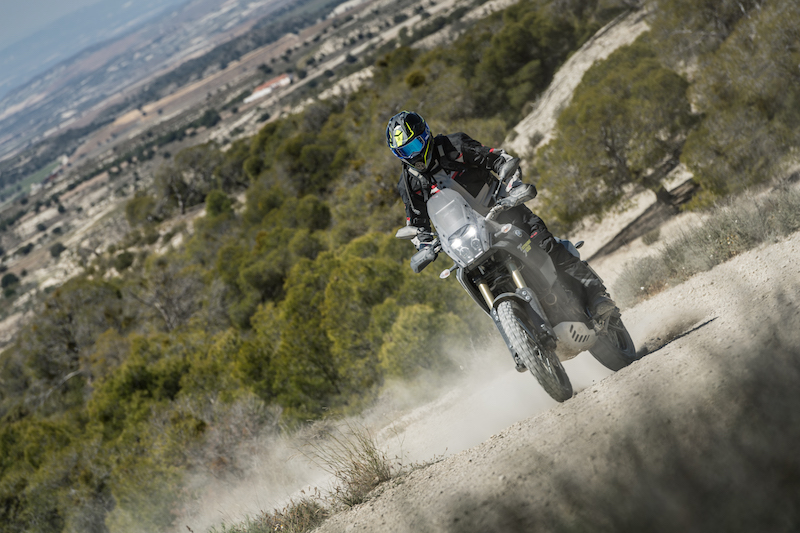 From the base of the existing motor and new frame, Yamaha has built the new Ténéré 700 to the formula that has worked for this model for more than three decades. There are no unnecessary frills, no complicated technology, just tried and tested design that will keep the bike going through whatever you throw at it.

There are no different riding modes, no traction control, no gyroscopically controlled ABS, no electronically adjusted suspension – nada.

At the front, there are 43mm USD Kayaba forks adjustable for rebound and damping, at the rear it’s a piggyback KYB shock using a linkage with the same adjustments and with a manual preload knob to set your sag at the turn of a wrist. Both units provide 200mm of travel.

The conventionally spoked rims run tubed Pirelli Scorpion Rally tyres, with the practical combination of 21” and 18” sizes giving the best options for dual sport and off-road rubber from most manufacturers.

As for the brakes, it’s a twin disc twin pot Brembo set-up at the front and a single pot Brembo at the rear, with simple ABS that can be turned off if required. 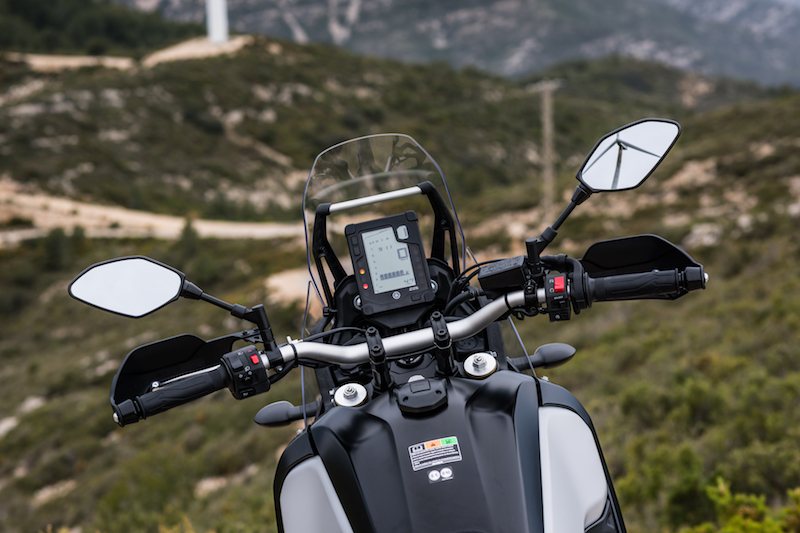 The bike runs a pleasingly narrow 16-litre tank with a 4-litre reserve which should be good for just over 200 miles, and thanks to the flexibility of the motor, it will tolerate down to 90 Ron petrol, handy if you happen to find yourself at a fuel stop at the back end of beyond!

The small screen offers good levels of wind protection to both the rider and the simple, vertically mounted LCD dashboard display, which keeps you informed as to the important statistics.

But with such a clear and over-arching focus on simplicity and function, the danger was always that the bike would end up feeling basic and simple. But nothing could be further from the truth, as the new Ténéré 700 is a great looking, well designed and well thought out motorcycle that does everything you want it to.

On the road it has impeccable manners that will equal and often exceed that of a road-focussed bike. On the trail, thanks to the great riding position and neutral balance, it displays a sure-footedness and agility that is truly confidence inspiring. 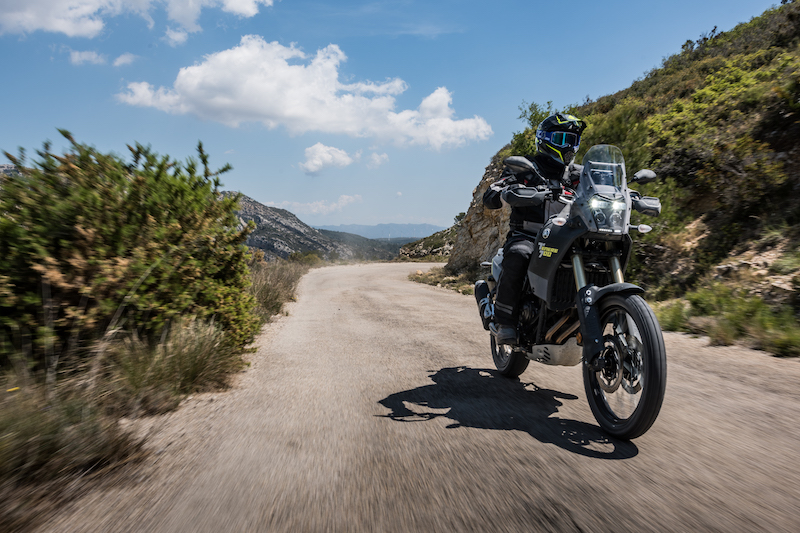 Where the old Ténéré often felt heavy and ponderous away from the tarmac, the Ténéré 700 now feels a lively and playful. Without the complication of electronic riding aids, the control is returned to the rider and the experience is both refreshing and rewarding in equal measures.

The suspension is well specced and does its job both on and off the blacktop, the brakes have a delicious combination of delicacy and strength, and that buzzing little Crossplane motor will keep you smiling all day.

All this for a staggering £8699. There is not a comparable adventure bike on the market for anything approaching that price.

The 2019 Yamaha Ténéré 700 is a fitting addition to the long and enviable heritage of the both brand and the Ténéré name, and we confidently predict that It will sell by the containerload.

You can read the full review of the Yamaha Ténéré 700 here.