Riding Suzuki VanVans to Mongolia and back… 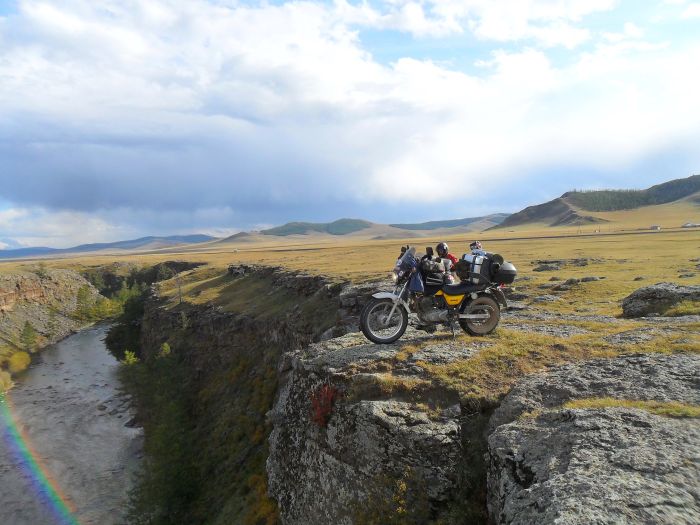 As part of our A1 Adventure guide (see issue 21 of ABR), we caught up with David Nixon who, together with his mate Jono, rode to Mongolia and back on a pair of 125s…

ABR: How old are you?

ABR: How long have you been in to bikes?

DN: My first bike was a Honda Monkey bike which I shared with my two older brothers when I was five, and Jono had a beat up Honda 90 called Boggy, round about the same time.

ABR: How long have you had the VanVans for?

DN: Jono bought his VanVan a couple of months before we set off. I wasn’t quite as organised and only got mine a week before, as they’re not very common here, (where??), so it took a bit of finding. I remember test driving it thinking there was something wrong with it, ’cause of the serious lack of power, but that’s just the way they are. We were well into Norway before I started to get a feel for it!

ABR: Why did you buy them in the first place?

DN: Well, at the time of planning Jono didn’t even have a bike licence and he passed his test only a couple of weeks before we set off, so a 125 was all he could have on the road and although I had a couple of bigger bikes that I could do the trip on I figured that if I did take one I would find it infuriating having to hang back for him so I’d probably have a lot more fun if I was on a 125 as well. While I was in England with him planning the trip we started looking into which bike would be best. It had to be off-roady, have good mpg’s and look good in photos. When we discovered the Suzuki VanVans with those huge tyres and a claimed 90mpg we knew we’d found the right machine for the job, and it turned out on a good flat road just cruising along we could actually get about 130mpg! 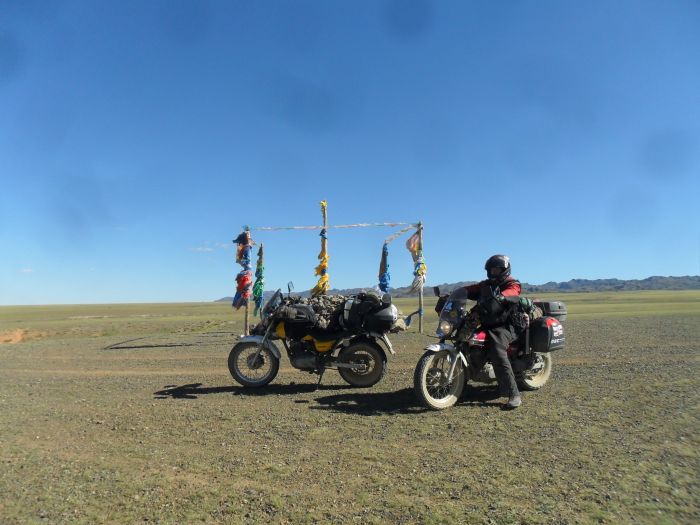 ABR: Why did you decide to ride them to Mongolia?

DN: Well we were going to ride them to china originally, but when we found out about all the costs involved with driving in China we scrapped that idea, so Mongolia was as far as we could get.

ABR: What modifications to the bikes did you make?

DN: I fitted a top box and a tank bag to mine. It already had a screen when and Jono bought the same screen as mine. We both fitted heated grips, moved our front indicators up just below the handle bars so they’d be protected when we came off. Jono fitted a top box to his too, and another smaller one to the side to act as a pannier. He also fitted a bar from the passenger foot peg bracket to the rear of the frame to give it more strength (I wish I’d done the same!). He put that green slime into his tyres too, to prevent punctures. I wish I’d done that too, ’cause I had about thirty punctures over the course of the trip and he never got any!

ABR: Did you have any problems with them?

DN: Yes, the racks were only rated for three kilograms, but we had a fair bit more than that on them. Jono’s was the first to go in Siberia when he crashed trying to race the Trans Siberian train… then mine went a couple of hours after entering Mongolia when I hit a huge pot hole. I had it fixed and strengthened soon after reaching Ulaan Bataar for less than €1, then, just after leaving Mongolia I noticed a scraping sound coming from the rear of the bike every time I rode over a bump in the road, so I pulled in to check it out and to my horror I found that my frame had completely snapped in three places and the only thing stopping the back end of the bike from falling off was the back mudguard. We tied it back together with string and got it welded in the next town. That was a bit dearer; about €20, but still not bad, aye! Jono also had trouble with spark plugs in Mongolia and Kazakhstan, we put it down to bad petrol, what with his being fuel injected. It maybe wasn’t as well suited to it as my bike, which was the carbed model, but who knows.

ABR: How long did it take you?

DN: Seven months, from the end of May to Christmas eve.

ABR:  How long did you think it would take you?

DN: We expected to be home sometime in February, but we decided to pick up the pace a bit and get home for Christmas.

DN: One change of clothes, a tent, sleeping bag, petrol can, a very compact gas stove and a good selection of tools and spare parts (chain, brake pads/shoes, bulbs etc.) I wish I’d brought wellies for all those Mongolian river crossings. Motorbike boots just don’t cut it  when you’re camping every night as you never get a chance to dry ’em out. 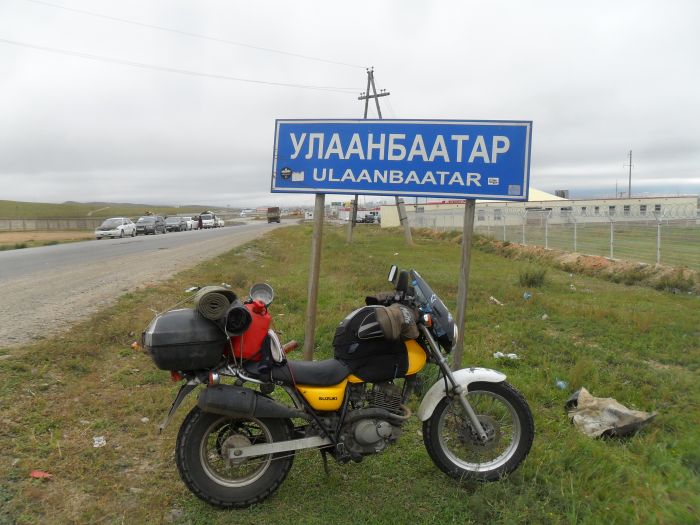 ABR: Have you still got the VanVans?

DN: I still have my VanVan but Jono sold his and bought another one. He went for the carbed model this time!

ABR: Where next on them?

DN: Well, I want to go overland to Oz next, but I’m not sure whether to use the VanVan, my Mz mastiff, or my Suzuki Samurai, which I’m currently doing up. I’m going save up a lot more money this time and maybe tackle China this time, but might go for a more southerly route yet. Jono is currently riding a Chinese version of a Honda 90 from South East Asia to India.

ABR: What was the best moment of the trip?

DN: It’s hard to say. I rode my VanVan along the Circum Baikal Railway in Siberia, which was great fun and for the first time on the trip actually met other travellers, so it was cool to be able to swap stories for a while, but I think Mongolia was just great, one adventure after another. We managed to get hold of a really good map in Ulaan Bataar that had the location of every petrol pump in the country marked on it, which gave us the confidence to go well of the beaten track. It even had the smallest most remote mountain passes on it, and we couldn’t resist trying a few of them out. One of them took us to over 3,000m, where the bikes had so little power we had to push them up, and it got pretty cold too, but some Nomads took us in and let us sleep by the fire in their gur/yurt for the night, which was a welcome change from the tents. We also managed to get to the foot of Mongolia’s highest mountain to see the glacier, and we got caught up in a serious snow storm up there which was quite scary but made for some great photos.

ABR: What was the worst moment of the trip?

DN: Just after leaving Mongolia on route to Kazakhstan, through the Altai region of Russia, we stopped off in a village to stock up on food and a group of drunken Russians managed to steal our sat nav and even tried to steal my helmet, while it was still on my head! They ripped the visor off, but we managed to get away, and then the snow came along again so I was riding along getting snow in my eyes, which was kinda unpleasant, so we stopped off at the next town to get some cling film to wrap around my helmet to act as a visor, but I couldn’t see anything through it, except the faint glimmer of Jono’s back light, so I just had to try and follow that. It was at that point that my frame snapped, so that was a pretty low point. But I got the frame welded up and in the next city we came across a Russian biker who helped me find a new helmet, then took us back to his house, fed us, let us get cleaned up and then led us out of the city and pointed us in the direction of Kazakhstan, so that put my faith back in the Russian people. 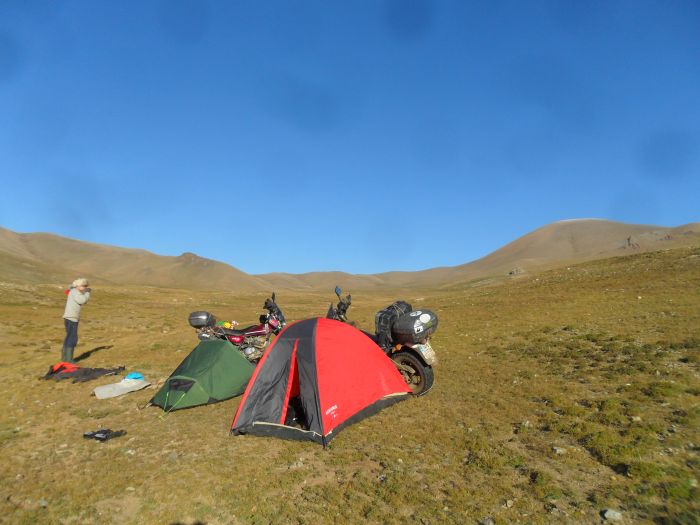 ABR: What advice would you have for someone thinking of doing this?

ABR: How much roughly do you think it cost you?

DN: I think I managed to raise about €5200 by selling most of my other bikes, as I couldn’t get a job at the time and that paid for everything, including buying the VanVan, but my local bike shop Clonmel Motorcycles gave me €300 towards buying the bike, serviced it for me and gave me all my spares for free, which was nice. We wild camped almost exclusively, and did all our washing in lakes and rivers; anything to keep the costs down. We probably only paid for accommodation about twenty nights, tops, in the entire trip!

DN: Mongolia’s great! A lot more mountainous than I’d imagined. I always pictured it as being green rolling hills, but we didn’t see much of that at all. There are some serious contrasts in the weather, too, probably because of the differences in altitude, but one day you could be sweating in the desert, and the very next day caught in a snow storm!

ABR: How did you navigate?

DN: Setting off we bought an ordinary car SatNav, with European maps on it. That got us as far as Russia, then we bought a Russian one in Saint Petersburg, which was a bit temperamental, but had all of Russia on it in great detail, and it forced us to learn to read and write in Cyrillic, too, which was very useful. 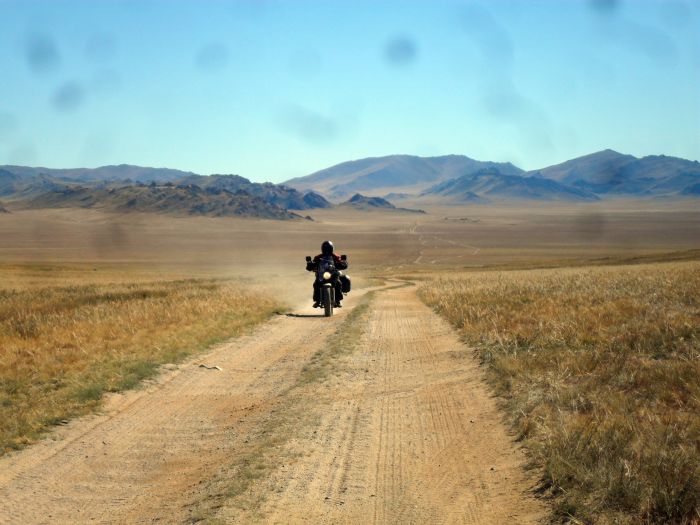 ABR: What did your mum say when you told her you were going?

DN: She was quite excited about it actually, maybe because she was finally getting rid of me! She helped a bit with planning too, and was always handy when we were on the road. When we were without internet we could always text her if we needed something looking up, like currency conversions, which are always good to know.